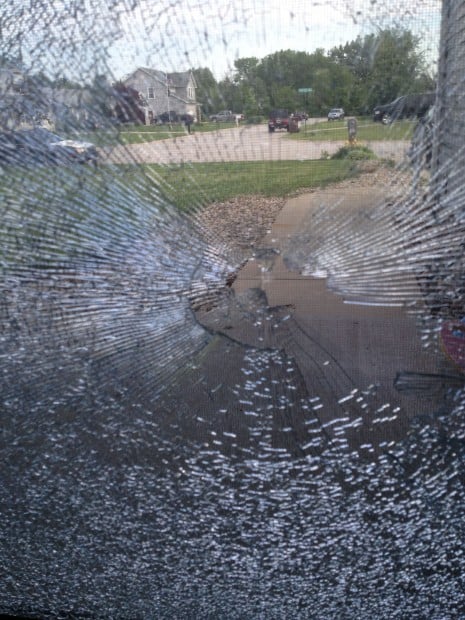 A view through Michele Talmadge's bullet-damaged front door. The glass was shattered about 5:15 p.m. Thursday by a bullet fired by neighbors who were target shooting, police said. The bullet narrowly missed Talmadge. 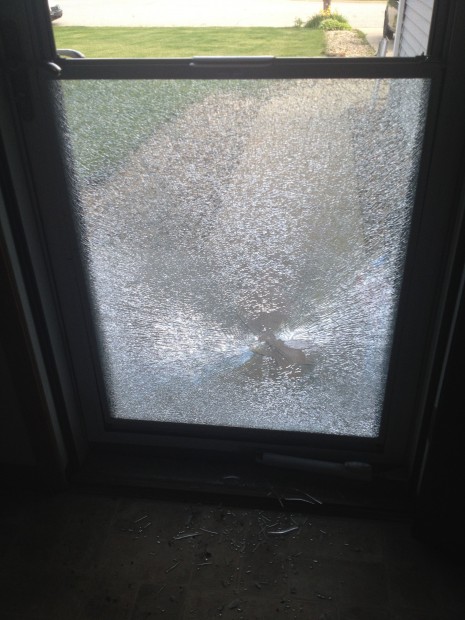 A view through the Michele Talmadge's bullet-damaged front door. The window was broken Thursday.

UNION TOWNSHIP | Michele Talmadge said she was standing in her living room in the 300 block of Pepper Creek Drive talking to her son about 5:15 p.m. Thursday when she kicked an exercise ball and her front storm door shattered. Glass from the broken window hit her face.

After realizing the ball did not cause the damage, she and her son assumed from the flying glass that a BB was shot through the door.

She later learned a bullet was shot into her house. Had she not leaned back a few inches to kick the ball, it likely would have struck her at eye level. The stray bullet also came within a few feet of two neighbor children playing outside, police said.

"I think I liked it better when I thought it was a BB gun," Talmadge said Friday.

Porter County police said the bullet came from a couple who were target shooting about 1,800 feet away without a backstop.

Talmadge said she was upset about the couple's decision not to take proper precautions.

No one was arrested, but police took possession of the handguns and forwarded the details to prosecutors for consideration of criminal recklessness charges against the couple.

The man, who lives south of Talmadge in the 400 block of Ind. 149, told officers he was aiming at a watermelon placed on a stand on a hill at the north side of his property. He shot at an upward angle, and police found what appeared to be several bullet marks in a tree just north and east of the watermelon.

The man told officers he didn't think the bullets would be able to travel far enough to hit anything beyond the field, police said.

Talmadge said the couple's home is obscured from her sight by a tree line. She said it is not unusual to hear gunshots off in the rural area.

A mark in the sidewalk outside Talmadge's home led police to believe the bullet was in a downward trajectory when it struck the concrete and bounced upward through the door.

A bullet, which appeared to be from a 9 mm gun, was recovered from insulation within the wall of her home.

A view through Michele Talmadge's bullet-damaged front door. The glass was shattered about 5:15 p.m. Thursday by a bullet fired by neighbors who were target shooting, police said. The bullet narrowly missed Talmadge.

A view through the Michele Talmadge's bullet-damaged front door. The window was broken Thursday.