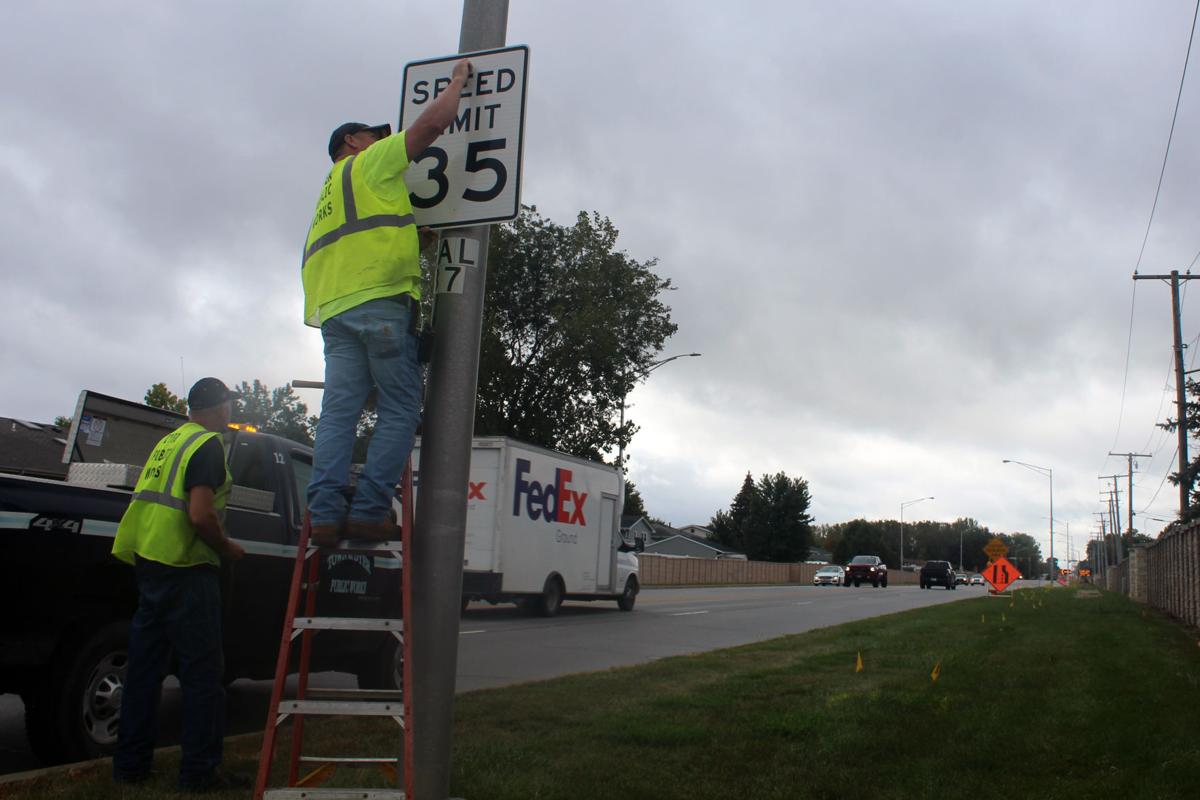 Dyer Public Works employees Martin Razo, on the ladder, and Dave Purkey, left, change speed limit signs Monday on Calumet Avenue between U.S. 30 and Main Street in Dyer. The street sign near Main Street on Calumet, which is shown, was the ninth sign Razo and Purkey changed Monday. 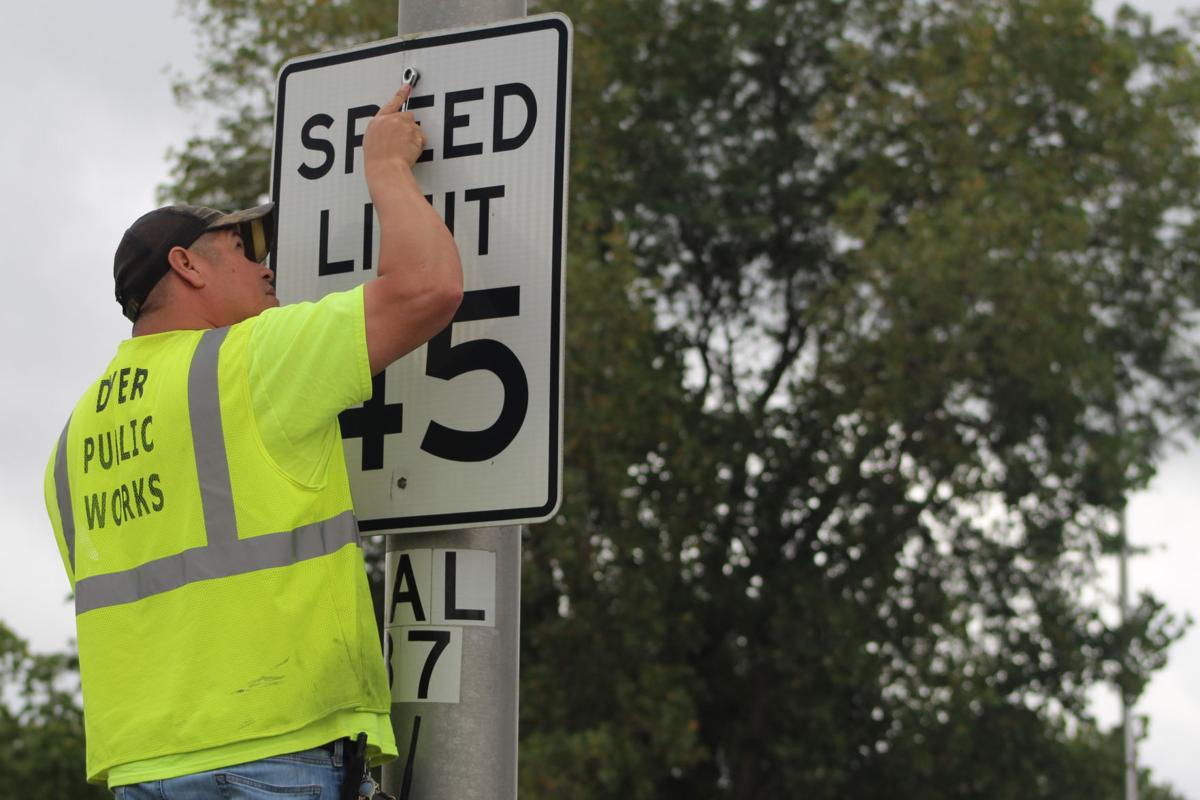 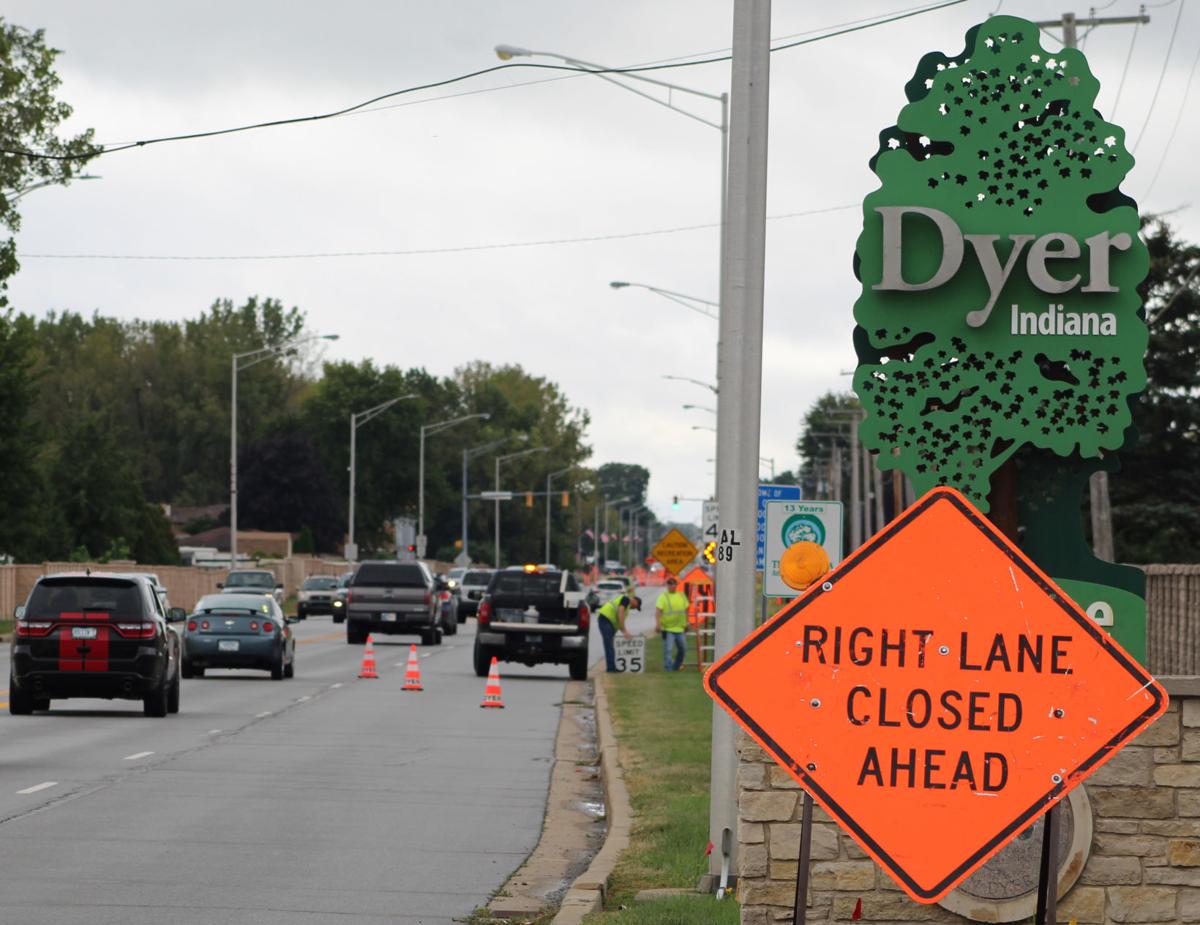 Traffic hums by Monday on Calumet Avenue near Main Street while Dyer Public Works employees get ready to change a speed limit sign near the intersection.

DYER — Motorists driving on Calumet Avenue in Dyer will have to slow their roll after the town has posted a reduced speed limit for the road.

The change comes after the Dyer Town Council approved lowering the rate of speed during a Sept. 9 meeting.

During that meeting, Town Attorney Adam Sedia said the new speed limit could be enforced as soon as the town's speed limit signs were changed.

Town officials told The Times on Monday while the change took effect in a little more than a week, the decision didn't happen overnight.

"It was a decision that compiled over years, and it just seemed it was the right time to do what was within our control," Town Manager Dave Hein said.

Hein said the town wanted to give as much advanced warning as it could, and added the change aligns with communities north of Dyer that also follow a 35 mph speed limit on the road.

"It seems as if all the way from Whiting to Route 30, it's 35 miles an hour, except at some key spots that are 25 in Hammond by the old city hall, and then ours was the only 45 section," Hein said. "It just seems natural that we would keep in the flow with the rest of the geographical area."

As Dyer encourages more activity at its parks, Hein said the town has looked at how pedestrians travel around on sidewalks and on foot.

"The town of Dyer does not put fees in place as a revenue grab. We make very little off of our traffic tickets because we don't have our own court system," Hein said.

He added while U.S. 30 has a higher speed limit, the road's rate of travel isn't set by Dyer because the state road is regulated by the Indiana Department of Transportation. Hein said the town is working with INDOT to address the timing of traffic signals on U.S. 30 from the state line throughout Dyer, which also will include work on Calumet.

Dyer Police Chief William Alcott said the need to change the speed limit has been growing with more pedestrian traffic on U.S. 30, development moving along at Central Park and a new sidewalk at Northgate Park, on which children ride bicycles.

"When the speed limit is 45, people feel they can do 10 miles over the speed limit, so those cars are traveling anywhere from 45 to 60 miles an hour," Alcott said. "We have a congested area, Route 30 and Calumet Avenue, you come over the bridge, and it's a safety hazard right there. Now, I'm not saying there's an increase in accidents, but that almost could turn into something bad.

"If you can save somebody's life or property damage over a few seconds, it's worth it."

In the next year William Alcott, who became police chief July 1, hopes Dyer police command staff and supervisors will have the confidence to move ahead in their careers through training and mentorship

Dyer Public Works employees Martin Razo, on the ladder, and Dave Purkey, left, change speed limit signs Monday on Calumet Avenue between U.S. 30 and Main Street in Dyer. The street sign near Main Street on Calumet, which is shown, was the ninth sign Razo and Purkey changed Monday.

Traffic hums by Monday on Calumet Avenue near Main Street while Dyer Public Works employees get ready to change a speed limit sign near the intersection.