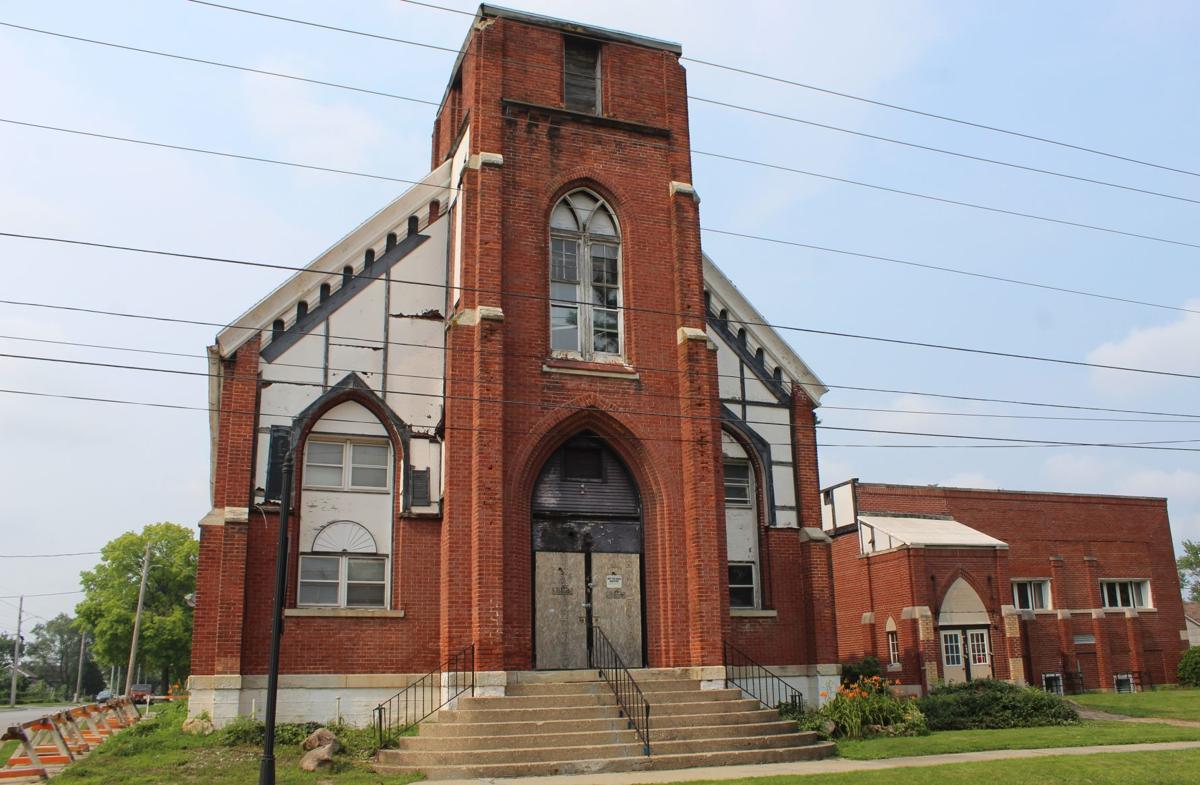 The old Trinity Lutheran Church at 400 E. North St. was found to be in violation of various state and city ordinances in a June 25 property inspection report. 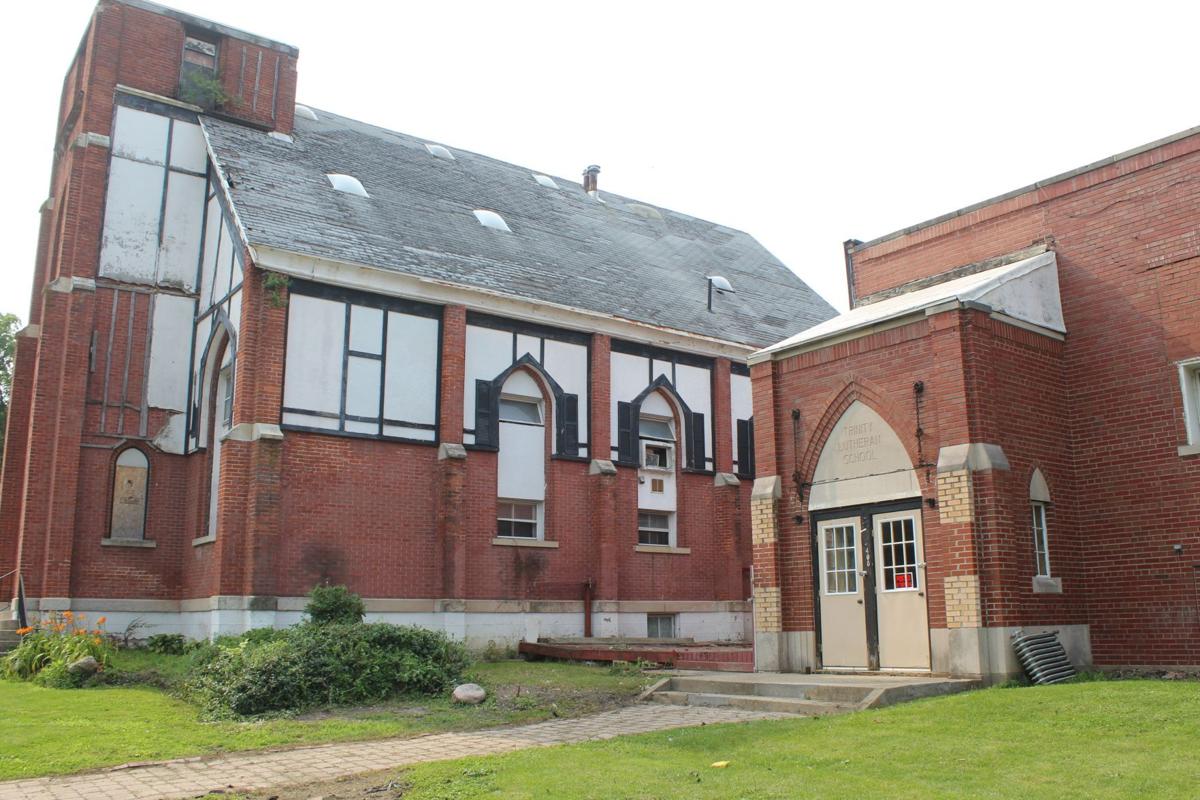 The old Crown Point sign and old fencing have been cleared from the front of the old Trinity Lutheran Church. 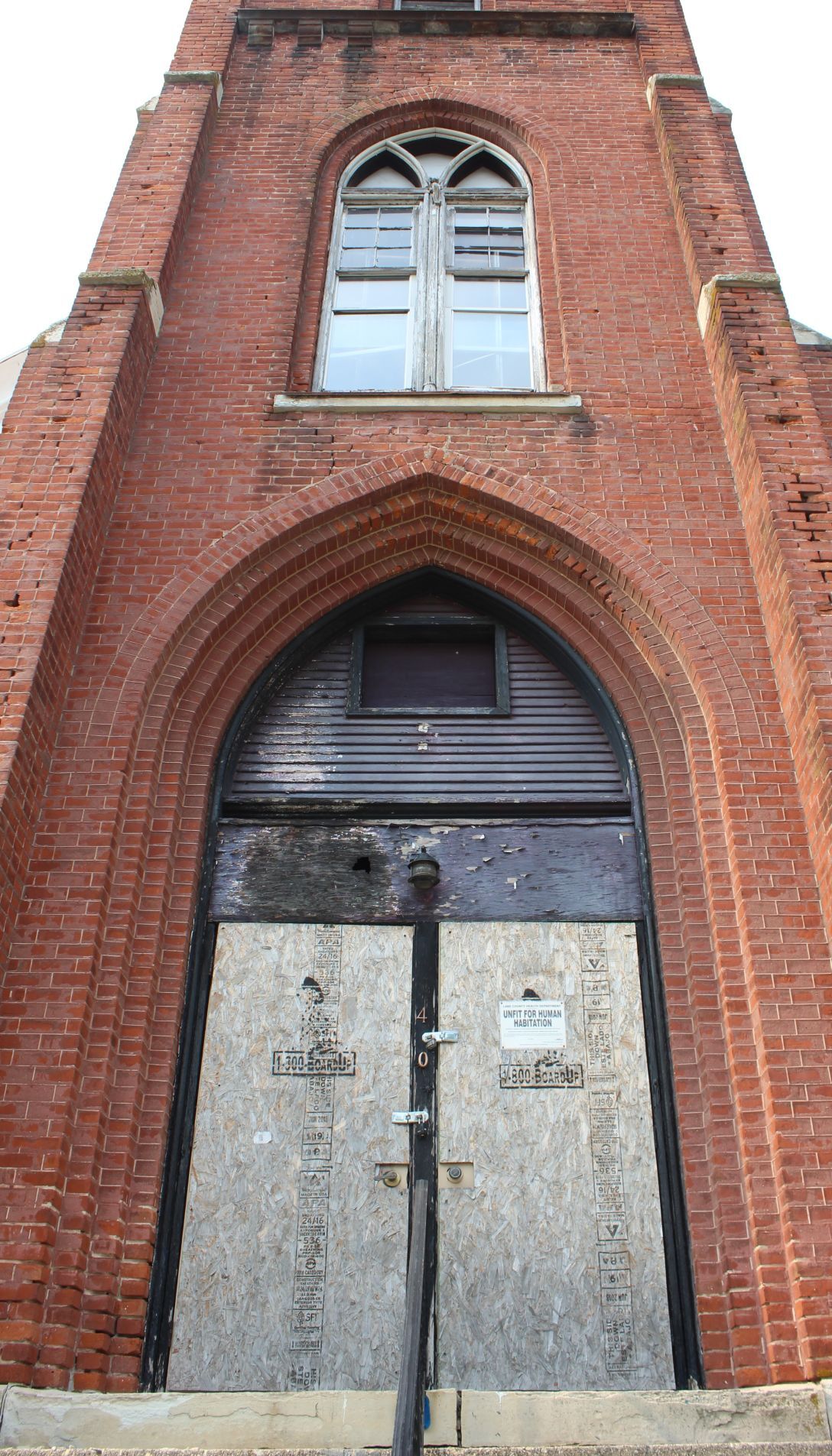 Barricades are positioned along a North Grant Street sidewalk near the old Trinity Lutheran Church.

CROWN POINT — A property inspection report from late June shows a 2018 fire was enough to shut down the old Trinity Lutheran Church.

The church at 400 E. North St. was built in 1886, according to a previous Times report and Lake County assessor's office records.

And while a nonprofit is aiming to restore the church to its former glory, a neighboring resident has raised concern over the report, which shows the building violates various city and state ordinances.

During a Wednesday meeting, the Crown Point Board of Works received an update on the church from Assistant City Attorney Alex Kutanovski, who said a close eye has been kept on the building.

"The building is boarded up and secured. We've seen progress there at that building. Sheds removed, clean-up on the outside," Kutanovski said. "Right now, we're just waiting for a confirmation of the date when the structural engineer will be coming out, but it does seem like they're making progress at that property at this point and time."

Crown Point Mayor David Uran directed the church be kept on the board's agenda for a biweekly progress report.

By press time, Uran did not return a request for further comment. He later told The Times Thursday he has confidence the city's legal and building departments are "on top of everything," and will keep him advised of the direction the city needs to head in.

Generally speaking, Uran added the city's local rules and ordinances are in place to protect investment, but also work with property and residential owners to "make quality of life in Crown Point great."

There's "definitely a fine line when we start to look at (what the) ultimate goal of the community is, which is the quality of life of our community," Uran said. That's a "blanket statement for every home or business in Crown Point."

Paige Donaldson, who lives adjacent to the church, said as the owner of a home built in 1885, she appreciates the value historic preservation brings to a community, but "without timely and proactive abatement efforts, an abandoned and nuisanced-riddled property, no matter the potential, is detrimental to the community and a hazard to the public."

"The longer it sits rotting, the likelihood of a potential for historical restoration decreases exponentially," Donaldson added.

Donaldson then pointed to 11 unsafe building ordinance violations, and three Indiana international residential code violations, that were discovered at the church and detailed in a June 25, 2021, property inspection report completed by the city's building inspector, Brad Wentz.

A copy of the inspection provided to The Times states the main building exterior "has numerous violations" to the city's nuisances and building regulations.

Among them include brick that is beginning to crack and chip; windows and door frames that need to be painted and are deteriorating and/or rotting; parapet walls that are rotting and falling apart; and leaning and rotting stairways and landings that would cause a fall hazard if used, the report states.

"The building had a fire back in October 2018, which was enough to have the building shut down for use," the report states.

Donaldson noted the property remains "easily accessible" and isn't enclosed by a fence, and a project timeline hasn't been provided to neighbors.

The city, Donaldson said, has decided to "forgo enforcing abatement of numerous violations against the current owner based on success of past projects."

"It's the city's duty to act," Donaldson said. "And if there is a death or injury due to the condition of the property, the city is complicit in its failure to insist on abatement."

She later added: "Continuing this every two weeks, without any progress or any set deadlines, is not beneficial to this community or the city or the neighbors."

Dave Bryan, vice president of the 1886 Church Foundation Corp., the nonprofit that owns the church, told The Times four volunteers have been working at the church "pretty much every day," for the past two weeks.

Bryan, in a Tuesday email to Kutanovski, detailed the progress made at the former place of worship.

A copy of the email provided to The Times shows in the past two weeks, 112 tons of scrap and steel were removed from in and around the church, school and parking area; the old Crown Point sign taken down; and old fencing, nine trees, 17 railroad ties, eight truckloads of trash and rotten wood discarded.

Three of 10 sheds were removed from the back parking lot, the email states.

As of Tuesday, the first and second floor on the north side of the church were empty, along with four rooms inside the school, according to the email.

According to the email, about eight more loads of trash remain in the front area, which will be "removed soon," and there are about 19 loads of items left to be taken to Kraft Auction Service, which "will continue to be removed in the weeks ahead."

Companies are set to empty the rest of the south side of the church's first and second floors this week and next, Bryan said in the email.

Bryan told The Times he anticipates the building will be cleared out by the end of August, after which a structural engineer will assess the building to see if it is sound.

"It's getting there, but we still have a long way to go," he told The Times by phone Wednesday.

When it comes to whether Bryan himself or the Foundation are being given special consideration, Bryan said city officials see the value in saving the historic church, but have told the group it has to keep a timeline.

Bryan said he hasn't been able to share a timeline with neighboring property owners, as he doesn't have contact information.

"We got the building in October before the pandemic hit, and pretty much all contractors, auctioneers, everything was shut down, and that's what I tried to explain at the last meeting," Bryan said. "I think because of that, everyone sees that we are trying to save this building. It's a great piece of Crown Point history."

He later added: "It's a shame that the building got in such disrepair, but it also (would) be a shame to tear it down."

WATCH NOW: The Times photos of the week

The old Trinity Lutheran Church at 400 E. North St. was found to be in violation of various state and city ordinances in a June 25 property inspection report.

The old Crown Point sign and old fencing have been cleared from the front of the old Trinity Lutheran Church.

Barricades are positioned along a North Grant Street sidewalk near the old Trinity Lutheran Church.