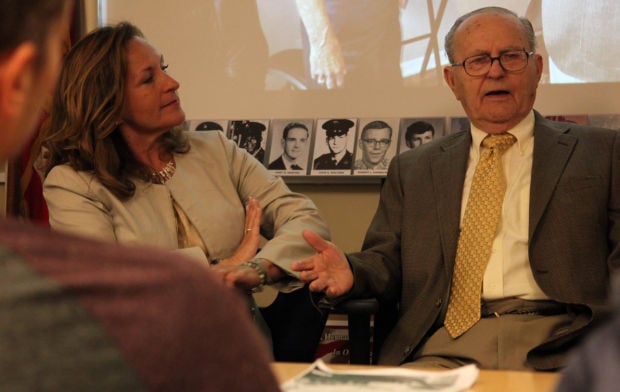 Nick “Beli” Mihajlovich talks to Tom Clark's Lake Central history class about World War II and his experiences as a freedom fighter as his daughter, Judy Vezmar, looks on. 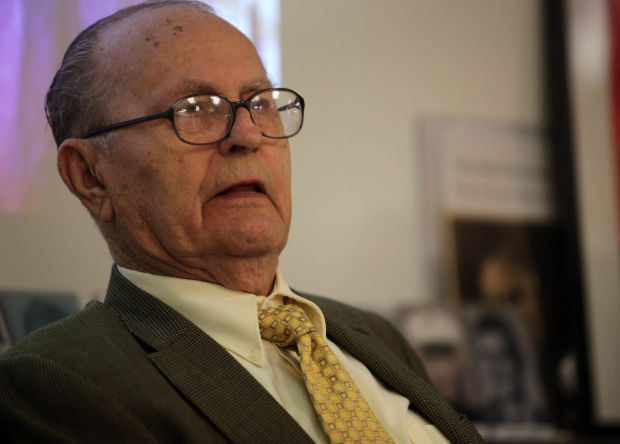 Nick “Beli” Mihajlovich recounts his brush with fame as he escorted members of the Forgotten 500, American troops who had been missing in action, to safety in the former Yugoslavia. 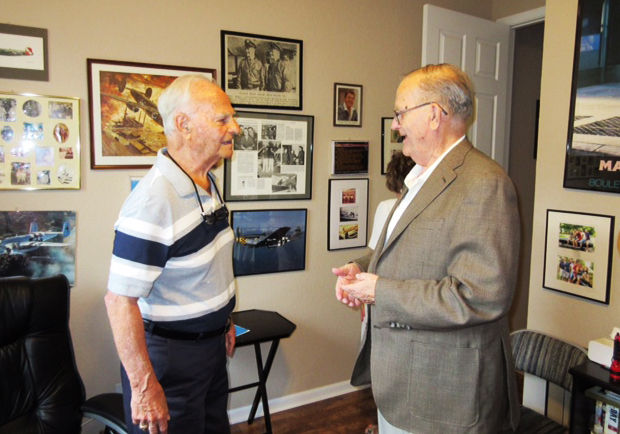 Nick “Beli” Mihajlovich, right, is reunited with Lt. Col. Milton Friend, one of the Forgotten 500, who he helped rescue as a Serbian Chetnik freedom fighter.

Nick “Beli” Mihajlovich will never forget the summer of 1944.

Talking to Tom Clark’s Lake Central High School history class, Mihajlovich recollected his journey to the United States at the height of WWII.

Mihajlovich’s country of Yugoslavia was in turmoil. On one side was the invading Nazi army from Germany. On the other was the rising tide of communism. Like many others in his town, the young man couldn’t help but think about escaping, lest he be pressed into joining the party and devoting his life to a system he did not believe in, or possibly face death.

“I listened to many warriors talking about how proud they were to serve in past wars,” Mihajlovich said. “This time, there was much disappointment and confusion. We just knew communism was not right.”

Mihajlovich, who had just turned 16 on Aug. 10, 1944, decided to join a group of Serbian Freedom Fighters known as the Chetniks. On one of his assignments, Mihajlovich escorted nine strangers to safety across a highway patrolled by German soldiers.

Later, Mihajlovich found out those strangers were members of the the Forgotten 500, American MIAs who had been attacked on their way to Romania to bomb Nazi-controled oil fields and later rescued by Yugoslav Serbs.

“I did it for the sake of another human being, because it was the right thing to do,” Mihajlovich said. “No other reason than that. I didn’t even know they were Americans until I returned from my mission.”

Soon after, Mihajlovich would escape Yugoslavia and flee to Italy. His dream was to come to America.

“I prayed, but there was no hope, because I had no family and friends there to sponsor me,” Mihajlovich said.

One day, “out of nowhere,” Nick’s prayers were answered as an American officer came up to Mihajlovich and inquired about his nationality.

“I told him I was Serbian and he laughed, saying, 'you don’t look Serbian,’ ” Mihajlovich said. “He proceeded to tell me he was there to help all Serbs with affidavits to (come to) America.”

That is when Mihajlovich learned about the efforts of the Serbian Orthodox Church of the United States and the Serbian National Defense organization.

Months later, Mihajlovich immigrated to the Indiana Harbor section of East Chicago and started a new life, which would include his wife, Olga, and ultimately their three daughters, Cathy, Judy and Danica.

“I am very blessed,” Mihajlovich said. “I am most proud to be an American citizen for over 50 years. This is the greatest country in the world.”

Mihajlovich received a letter in August from one of the Forgotten 500 inviting him to his home in Boynton Beach, Fla. Nick would reunite with Lt. Col. Milton Friend.

Friend had become quite an historian and saved articles, books, posters and other memorabilia recounting the “story of one of the greatest rescues” in WWII history.

Friend presented Mihajlovich with a binder filled with memorabilia and praised him for his courageous act.

“It was a very emotional reunion,” said Judy Vezmar, Mihajlovich’s daughter. “We were so proud to see these legendary heroes have so much love and respect for each other. It was one of the most beautiful things I have ever seen, and we are so proud of my father.”

A jury awarded a Valparaiso woman $43.5 million after she was rear-ended by a semi-truck five years ago while waiting at a traffic light on Ind. 49 at Gateway Boulevard, according to her attorney Kenneth J. Allen.

Keri Devries, remembers her husband, Nicholas Devries, as a loving husband and dedicated father of four. It has been two years since his death on U.S. 41.

The Porter County Sheriff's Office announced Friday it opened a missing persons investigation for a 22-year-old mother and her 4-year-old daughter from Valparaiso.

Family faces Hammond woman's killer, who gets 50 years in prison

"There's not a day that goes by that I don't think about her ... she didn't deserve this," said Leslie Mimms, sister of homicide victim Sylvia Williams.

Nick “Beli” Mihajlovich talks to Tom Clark's Lake Central history class about World War II and his experiences as a freedom fighter as his daughter, Judy Vezmar, looks on.

Nick “Beli” Mihajlovich recounts his brush with fame as he escorted members of the Forgotten 500, American troops who had been missing in action, to safety in the former Yugoslavia.

Nick “Beli” Mihajlovich, right, is reunited with Lt. Col. Milton Friend, one of the Forgotten 500, who he helped rescue as a Serbian Chetnik freedom fighter.