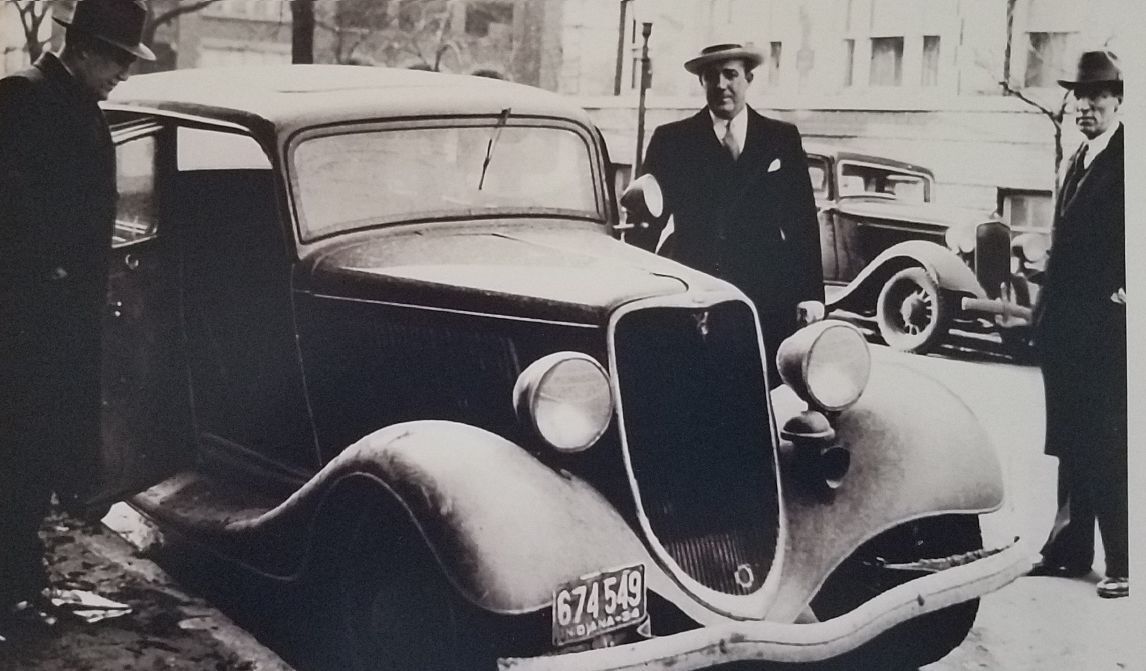 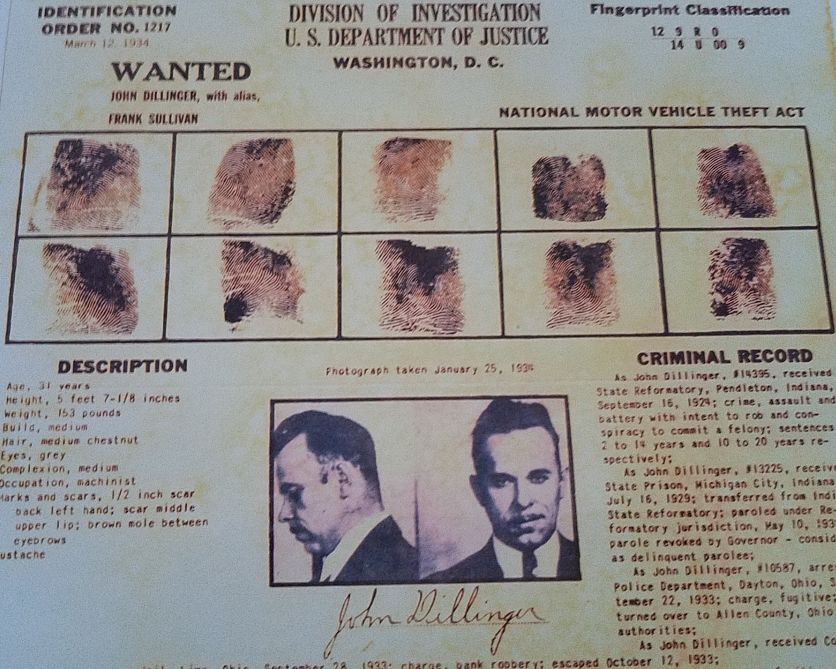 A wanted poster for bank robber John Dillinger after his infamous escape from the Crown Point Jail is shown.

After John Dillinger was arrested for the murder of a police officer during the robbery of the First National Bank of East Chicago, he infamously escaped from the supposedly "escape-proof" jail in Crown Point by taking guards hostage with what he later claimed was a wooden gun he whittled.

Dillinger stole Lake County Sheriff Lillian Holley’s 1933 Ford V8 police car, ultimately abandoning it in Chicago. It proved to be a fatal mistake, as crossing the state line in a stolen vehicle put the Federal Bureau of Investigation on the case, culminating in FBI agents gunning Dillinger down outside the Biograph Theater.

Chicago police impounded the car and later sold it at auction to a man from Milwaukee, who later moved to Maine.

Arizona resident Mark Love and the Old Sheriff's House Foundation in Crown Point tracked down Sheriff Holley’s car and restored it. Now they're bringing it for a homecoming 87 years after it was stolen during Dillinger's Crown Point jailbreak.

Expect a lot of pomp and circumstance at the April 3 event.

A procession of Lake County Sheriff's Department police vehicles, including a helicopter, will accompany the car to the Old Sheriff's House and Jail at 226 S. Main St. that will roughly follow the reverse route Dillinger took while fleeing to Chicago. The parade will leave the Lake County Government Center at 11 a.m. before arriving at the historic jail, which a nonprofit foundation has been restoring since 1987, hosting tours during the summer, a haunted house during the fall, and regular events like ghost tours and gangster-themed weddings.

The vintage cop car will be on display for the public to see outside the Old Sheriff's House, which will be open from 10 a.m. to 1 p.m. for an open house with self-guided tours. Crown Town Grill will cater the event with hot dogs, burgers and pierogi.

The Discovery Channel will be on hand as it films Holley's car for a documentary that also will feature a dramatic reenactment of a bank being robbed in Crown Point.

"The foundation is so exciting to be highlighting women in the workforce by showcasing the first female sheriff of Lake County," Board President Sandy Boyd said. "It's awesome to have her car found and restored."

Boyd is expecting large crowds to turn out, including many people dressed in vintage 1930s outfits.

"There are Dillinger fans, history fans, and a lot of supporters of the Old Sheriff's House and Jail," she said. "It's amazing that Crown Point still has this amazing building and amazing piece of history that stretched from 1882 to 1975, when it finally closed. A lot of families in Crown Point worked here as guards and officers, and you can see the progression of law enforcement, how inmates were treated then and how inmates are treated now. It's a whole learning experience. We're preserving the history and making it available to the public."

She hopes Holley’s car, which Love owns, can be displayed for the public permanently somewhere in Crown Point.

It's been verified as Holley's car by the vehicle identification number, said Roger Pace of RE/MAX Pace Realty, who helped arrange to bring it back to Crown Point.

"We're bringing it back in grand fashion with a police motorcade," Pace said. "Sheriff (Oscar) Martinez will provide one of the two machine guns Dillinger stole when he escaped. We'll have some things the Old Sheriff's House hasn't displayed and the public hasn't seen like FBI records, a death mask, a wooden gun and possibly the gun that actually killed Dillinger ... The car has the original steering wheel he handled and the back seat he sat on."

Pace hopes the rarely seen artifacts will shine some light on history.

"A lot of history is good and a lot of history is bad," he said. "Crown Point is known for the marriage mill and astronaut Jerry Ross, who spent more time in space than anyone. Dillinger's escape is part of our community's history. This will reinforce how first responders and police kept us safe from Public Enemy No. 1."

Crown Point residents have not been able to live mas or run for the border in town since April, when the Taco Bell restaurant at 1483 N. Main …

One of Northwest Indiana's largest and best known community theaters is entering its last act.

A new classical piece that debuts Wednesday portrays a journey along the South Shore Line.

GARY | Downtown Gary partied like it was the Roaring 1920s to celebrate the arrival of Centier, which hopes to spark a downtown renaissance in…

Try visiting Indy sometime other than May

True story: I was wearing a Kurt Vonnegut Memorial Library T-shirt in Chicago when the college-aged girl behind the counter asked me what that…

"They always just jump in," said LaMingto Tomlin, Sr., recalling the numerous times facility employees have gone far beyond what's required of them.

Mayor Thomas McDermott Jr. said before she struck his vehicle, the woman pulled up next to him and screamed obscenities at him from her car.

A 22-year-old Gary man told police the shooter was among a group of three males who confronted him after he spoke with a female neighbor, an official said.

"If I can forgive her, so can everybody else," McDermott said.

After 50 years, Checkered Flag Imports in Gary's Glen Park neighborhood is turning over the wheel to a new owner.

Thousands are expected to attend when Sheriff Lillian Holley's historic car returns to Crown Point for the first time in 87 years. The Discovery Channel will film scenes around Crown Point over the weekend for a show hosted by television star Josh Gates.

Beginning at 8 a.m. Saturday, a no parking restriction will be enforced on South Main Street between Joliet and Walnut streets, with a temporary road closure to go into effect at 10 a.m. Saturday, Crown Point police said in a Facebook post.

Calumet Region-made Explorer sales up 15.9% in the first quarter

The locally made Ford Explorer saw a 15.9% increase in sales during the first quarter of 2021 as Ford got off to a good start for the year, despite running into semiconductor woes that have hampered production.

Many retailers and restaurants across Northwest Indiana plan to heed the guidance of the CDC and other medical experts and continue to require masks on their premises.

Ford is rolling out three new versions of the Calumet Region-made Explorer, the top-selling Sport Utility Vehicle of all time.

Banks closed record number of branches last year, while NWI has lost a fifth of brick-and-mortar banks over past decade

Northwest Indiana has lost more than a fifth of its bank branches over the past decade.

The hourlong episode Josh Gates shot about John Dillinger in Crown Point will air on Discovery at 7 p.m. Wednesday. It's the season premiere of the eighth season of his show "Expedition Unknown."

John Dillinger Museum memorabilia could return to Crown Point, but bank robber's bloody pants will first be tested for DNA

The South Shore Convention and Visitors Authority is looking to potentially unload its John Dillinger memorabilia, and there's been interest in bringing it back for public display in Crown Point.

Haunted houses bring frights back to the Region

Reaper's Realm is closed again, but there are still plenty of haunted houses to shudder with fright in Northwest Indiana this month.

A wanted poster for bank robber John Dillinger after his infamous escape from the Crown Point Jail is shown.