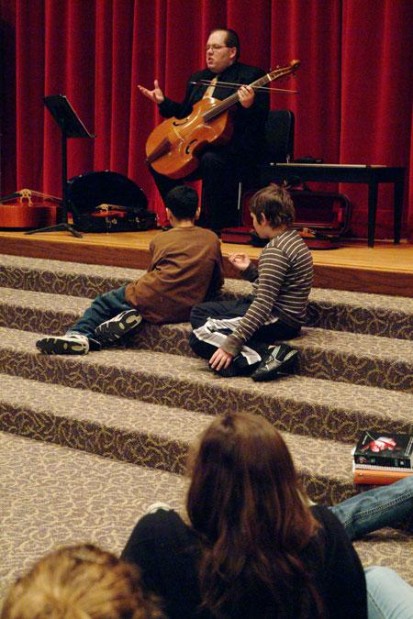 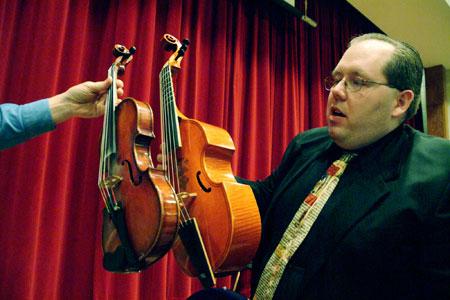 VALPARAISO | Singing the wonders of tobacco was admittedly not PC, but it was authentic.

Serna shared tales of early music and musicians in addition to performing on several of the instruments.

The thinner wood of the viol both makes the instrument lighter and causes its tones to resonate longer.

Whereas modern instruments mostly sport metal strings, the early instruments he demonstrated Monday were strung with animal gut, Serna said. In Renaissance Italy, premium strings would have been of lamb gut, he said.

Serna, a part-time music professor at Valparaiso University, said he brings the program to schools because students often don't hear the works or see the instruments until they get to college.

There are more pieces for viol than for its modern-day equivalent, the double bass, he said.

Serna said his programs are also designed to dispel the misconception that classical music is the domain of "a bunch of dead men."

He hopes students will explore different areas of music, listen to a wider range of recordings and -- in some cases -- even be inspired to learn to play period instruments.

Eighth-grader Soren Bjornstad was intrigued enough by Monday's special music program to stick around afterwards and ask about the viol and its extra string. Bjornstad, who plays violin with the Ben Franklin orchestra, said he'd never heard of the viol before and learned some interesting music history from Serna's program.