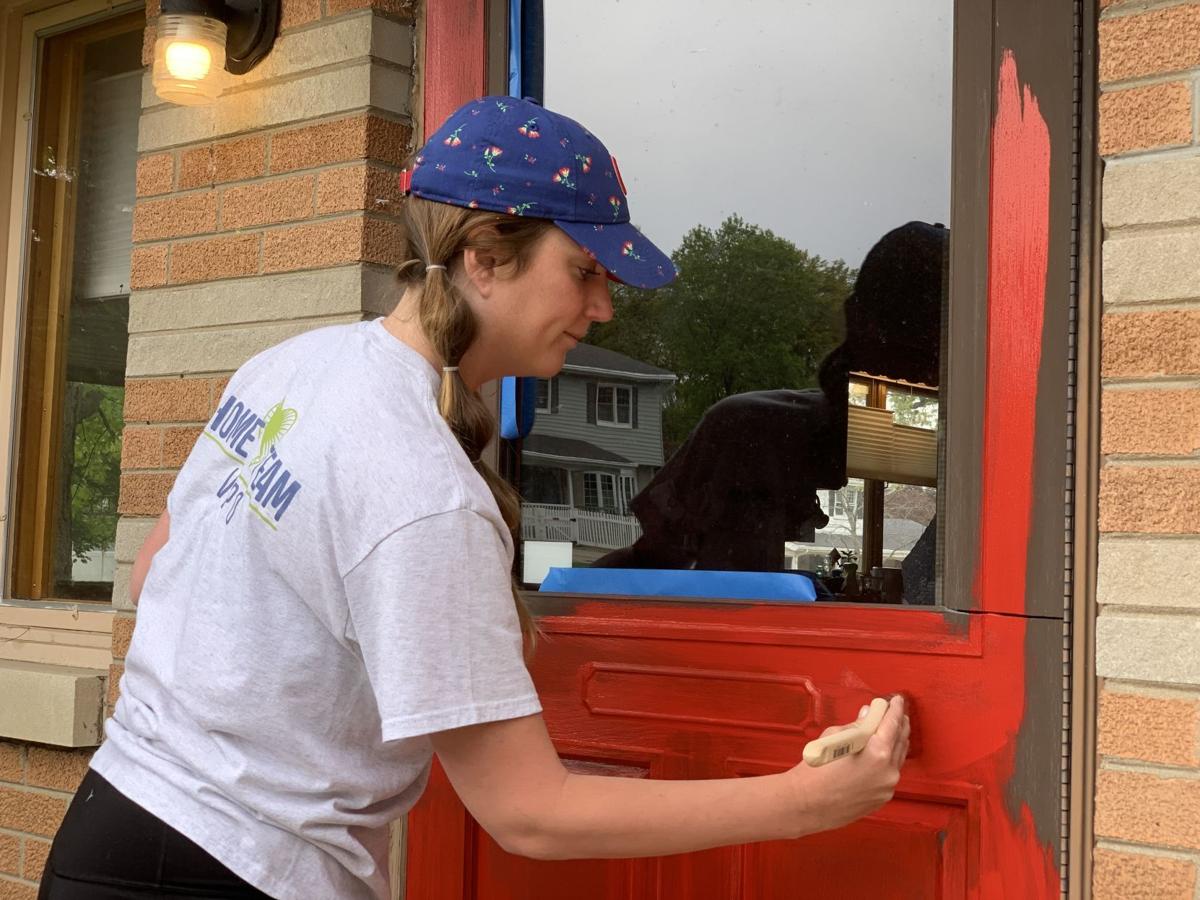 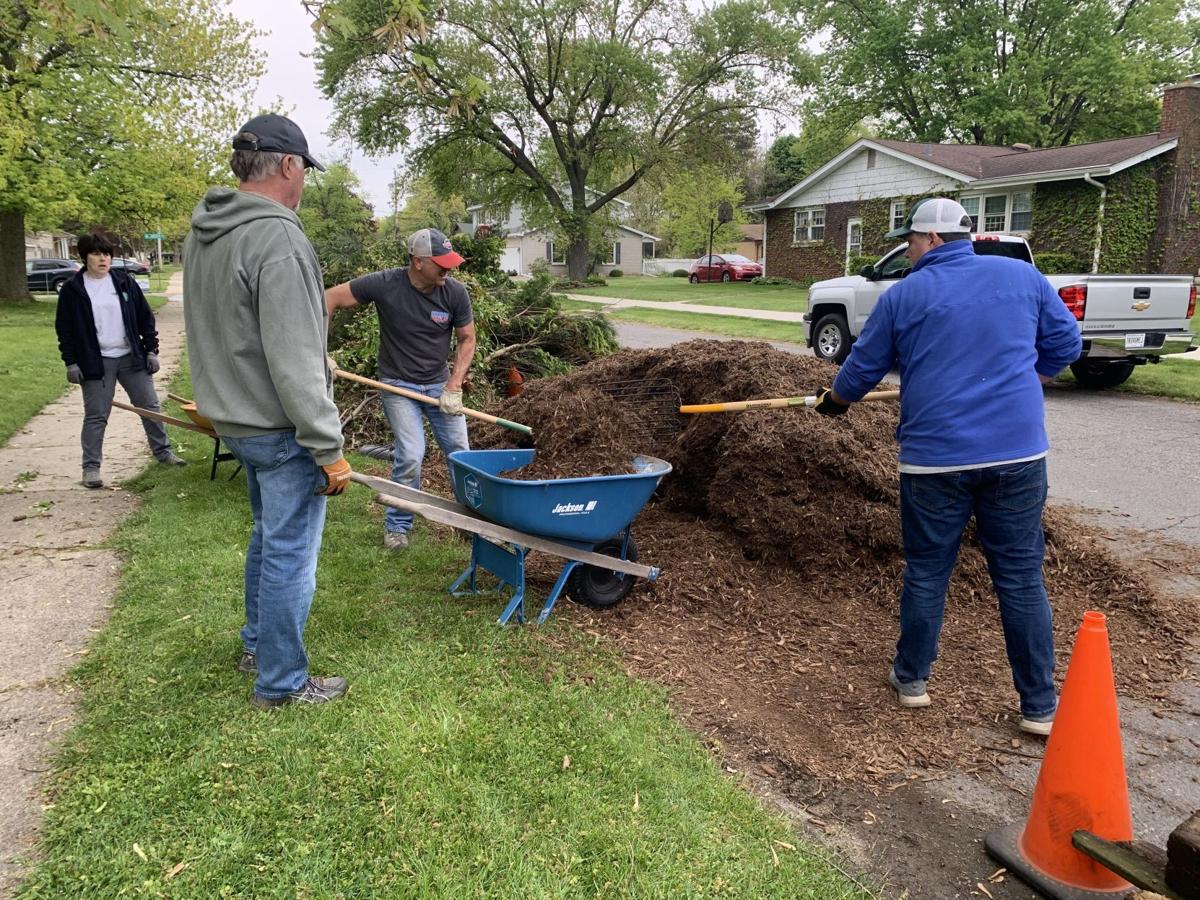 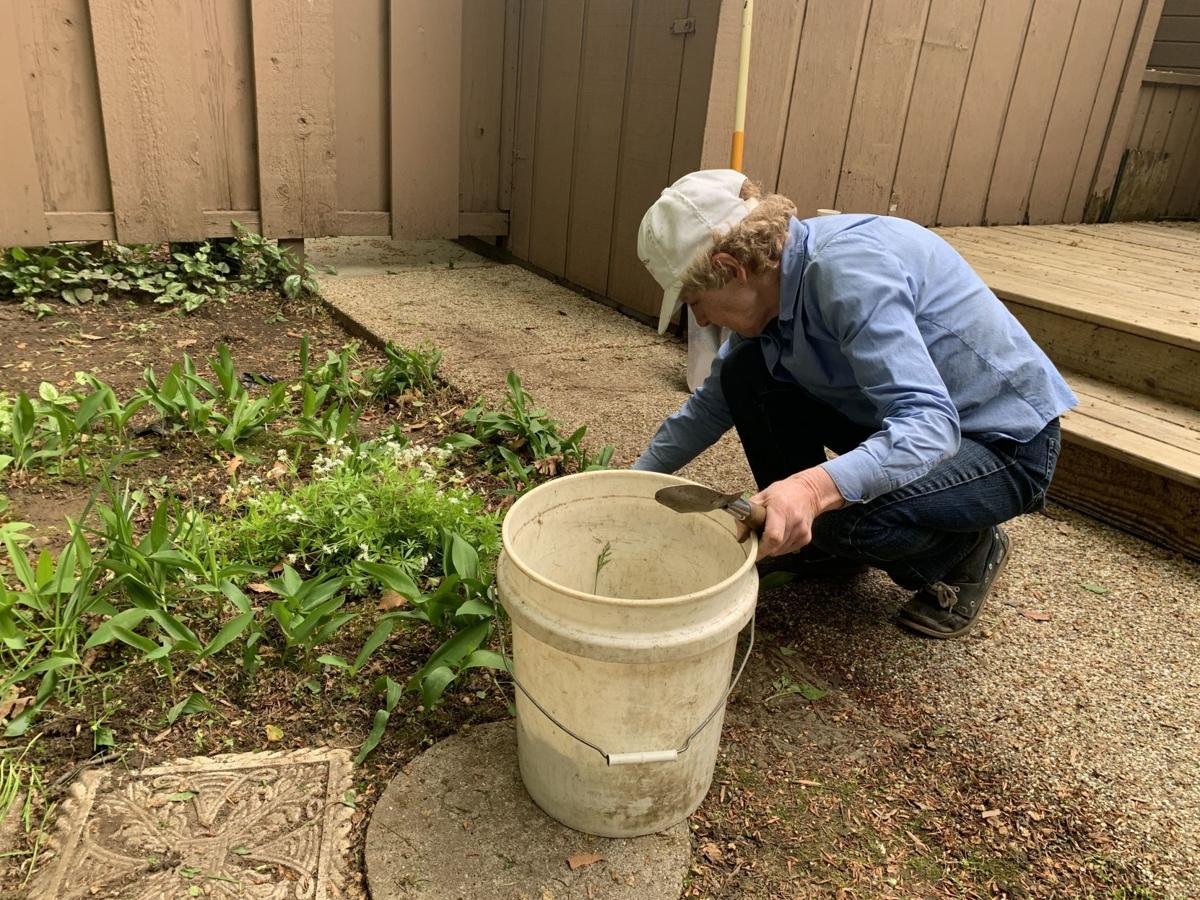 Sharon McGill said it was difficult to receive help after being a volunteer for years.

“I’ve done Christmas in April for many, many years,” she said. “Giving was a gift to me. Every house we did, you get to know the homeowners.”

But Saturday was her turn to be on the receiving end as Lori Nicklas scrubbed her siding and Bill Oeding installed new shutters. Firefighters visited to install smoke alarms and a carbon monoxide detector. While there, they changed lightbulbs McGill could no longer reach in ceiling light fixtures.

“I couldn’t believe that he just reached up and unscrewed them,” she said. “Just changing lightbulbs, what a difference it made.”

After Oeding installed the shutters, replacing faded ones, he told her it was the third set that had been installed beside those windows on the front of her home.

Oeding and Nicklas are board members for Home Team Valpo.

Ever since Rebuilding Together stopped, he said, there was a need that had to be met. Home Team Valpo focuses on senior citizens, people with disabilities and those with low incomes who would typically have a hard time maintaining their properties.

“I think the longer people can keep independent, the healthier they will be,” Oeding said.

Nicklas enjoyed her work on McGill’s home. She likes to be outside anyway, but she enjoys working with the community.

At another home, Drew Wenger was part of a crew pulling weeds to clean up an overgrown lawn. He used a plant identification app to help decide which were weeds and which were flowers, Home Team Valpo Executive Director Lori Simon said.

“It’s a beautiful city, and we want to keep it beautiful,” Wenger said.

Doug Burbank was grateful to be working with his hands instead of staring at a screen all day. “Doing something like this is more fulfilling,” he said.

“I think there’s a lot of things that fall through the cracks” when people can’t do everything by themselves, he added.

At Creekside Park, Valparaiso High School football and soccer players added brawn as well as brains. They planted trees, helped clear trails, spread gravel and picked up golf balls — the ones that couldn’t be picked up by machine.

Head football coach Bill Marshall said he and his staff enjoy community projects like this as both a team-building exercise and to give back to the community that shows so much support for the team.

The teams picked up nearly 20,000 golf balls, popping them out of the ground they had sunk into and wading knee-deep in muck to fish them out of marshy areas.

It was nice to get outside, said Jack Kuka, a tight end on the football team.

“You get closer as a friend group and as a team, defensive end Aiden McNeil said.

“It’s a good way of helping out the community” while having fun, running back Hayden Vinyard said. He planted trees, cleared a few paths and spread stone.

Steve Ingram, a real estate appraiser who acted as superintendent for that job site, said he has always volunteered. He was happy to help the crew of city employees and others, all volunteering for the day, as they helped the resident feel better about her home. They pulled out an old fence, trimmed bushes and trees, pulled out shrubs that had grown too big and blocked the windows and did other projects. Roofing professionals will do a repair job later.

Mayor Matt Murphy, who used a pitchfork to load mulch into wheelbarrows before using a string trimmer to edge the lawn along the sidewalks, said Home Team Valpo fills the void in the nonprofit safety net he heard about when he was campaigning and meeting with residents.

Simon urged anyone interested in volunteering or who needs assistance to visit hometeamvalpo.org.

The suspect was described as a tall, slender black man who was wearing a blue hard hat, goggles and a mask covering his face from his nose to his chin, police reported.

A 14-year-old girl from LaPorte was among three people killed after a tubing accident Wednesday on the Dan River in North Carolina.

A "legacy" $185 million development near Interstate 65 and U.S. 231 that would combine living, retail and office spaces with restaurants and other amenities is looking to call Crown Point home.

Bryan Leto, of Gary, was pronounced dead at the scene, according to the Lake County coroner's office.

Kristie Rouse-Sears, 28, is accused of stealing more than $24,000 while serving as treasurer of an elementary school PTO and the Wheeler High School Cheer Club.

Gary officers located a gunshot victim after responding about 11:30 a.m. to the 4400 block of West 24th Avenue for a report of shots fired, police said.