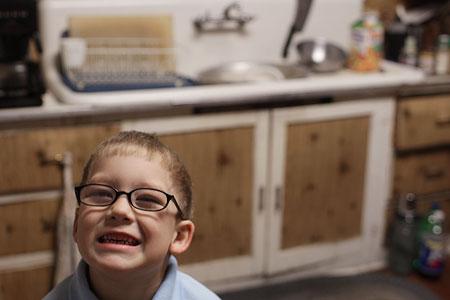 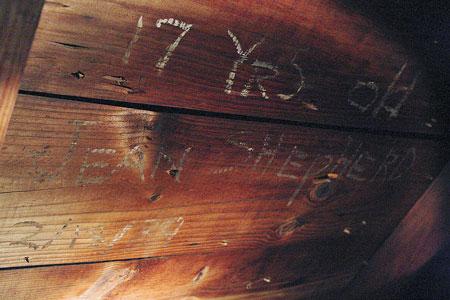 THE TIMES Aiden Moran, 6, stands in the kitchen of his grandparents' home at 2907 Cleveland St. in Hammond. "Except for the different glasses," John Moran said, Aiden resembles young Ralphie in the "Christmas Story" movie. 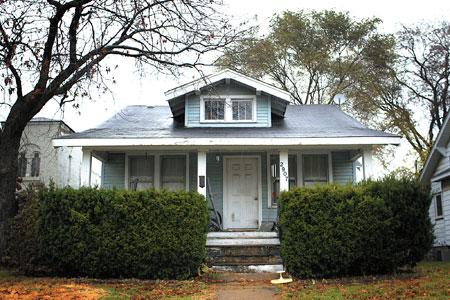 But climb a ladder and hoist yourself into the unfinished attic. Chalk inscriptions reveal the secret identity of 2907 Cleveland St.

It's the real "Christmas Story" house.

Author Jean Shepherd, the real-life Ralphie Parker, grew up in this modest, single-family home in the late 1920s and 1930s. "Shep" decamped Hammond in 1939, the year he and "kid brother Randy" doodled in the attic. But the Hammond High grad never left his hometown behind. The writer-radio raconteur mined his boyhood memories of "Hohman" for his books and "Christmas Story" film.

The original clunker -- which inspired the Old Man's (Darren McGavin's) tirades -- was replaced years ago with an "octopus" furnace. But "the coal chute's still on the side of the house," Dan Moran said.

Directed by Bob Clark and narrated by Shepherd, the You'll-Shoot-Your-Eye-Out epic ranks as one of Warner Home Videos' top 10 moneymakers. According to TBS, home of the "Christmas Story" marathon, more than 45 million viewers tune in annually to watch Flick try to lick a flag pole and Randy eat "like the piggies." This year's showing will mark the 25th anniversary of the holiday chestnut.

No leg lamp blazes in the window of their home in the working-class neighborhood. But the Morans own a wee night-light replica and enjoy watching the film every year. A private residence, the three-bedroom house is off limits to tourists. "Shepheads" can take photos from the street.

The family was unaware of its home's literary and cinematic ties until Randall Shepherd stopped by in the 1980s. John Moran and his brothers, sitting on the porch, saw a limousine pull up, he said. Shep's sib introduced himself and asked to tour his former house. His mother declined, because "she didn't know him from Adam," said John Moran, 32. The family discovered the attic graffiti in 1989.

Despite his love/hate relationship with Hammond, Shep called his hometown "the center of all my writing," referencing friends, teachers and landmarks in his works. Parents Jean and Anna Shepherd were reborn as "The Old Man" and "Mother." Randall was Randy. The long-gone Goldblatt's and Cam Lan Restaurant in downtown Hammond were the likely models for Higbee's and the Chop Suey Palace.

Yet his humble 1,032-square-foot childhood home inspired some of the best "Christmas Story" scenes. The self-described "Cleveland Street Kid" staged Ralphie's "decoder ring" and "Lifebuoy" vignettes in the sole bathroom. The Old Man's "clinker" tirade was set in the basement.

The kitchen still has the original sink, under which Randy took refuge after the Ralphie-Scut Farkus brawl. The real McCoy has shelves.

Shep hand-picked the two-story frame house in Cleveland that doubled for 2907 Cleveland St. in the movie. The view from the backyard clinched the deal. He could see mills, a fixture in his working-class hometown.

Defense attorney John Cantrell said his client was shot four times during the fight that led to the homicide of 17-year-old Camrone Williams.

THE TIMES Aiden Moran, 6, stands in the kitchen of his grandparents' home at 2907 Cleveland St. in Hammond. "Except for the different glasses," John Moran said, Aiden resembles young Ralphie in the "Christmas Story" movie.