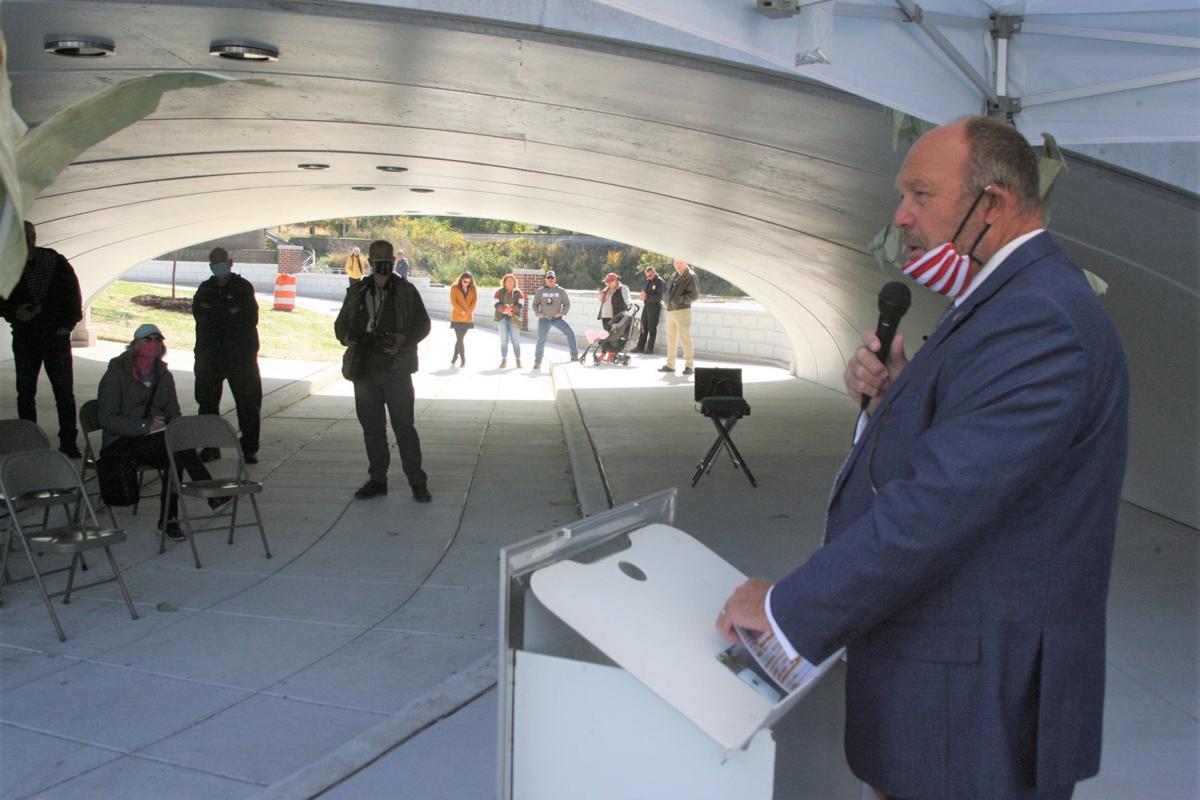 Hobart Mayor Brian Snedecor addresses the dedication ceremony Friday for the Third Street bridge project. Construction of the $7 million project began last May, replacing the existing bridge and adding some enhancements to the downtown area. 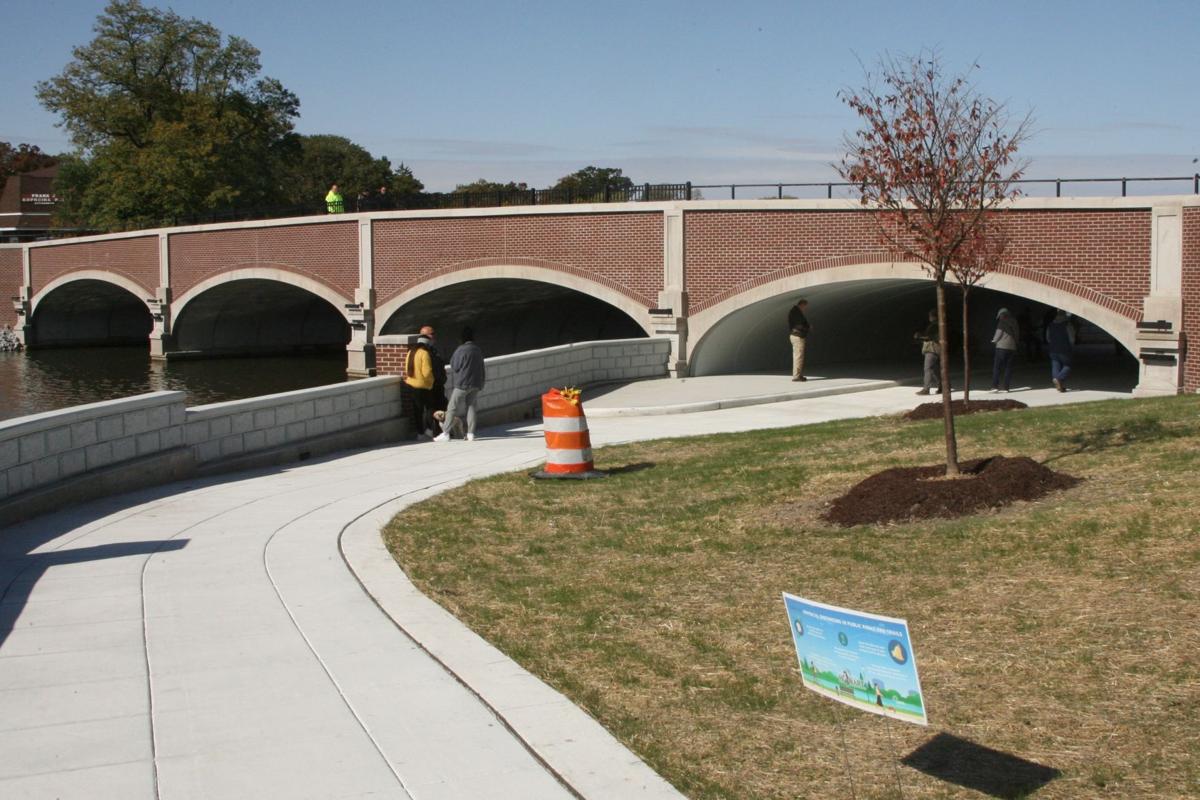 HOBART — As officials prepared Friday to cut the ceremonial ribbon for the Third Street bridge, Betty Funkhouser’s sixth-grade physical education class passed by. The girls not only witnessed the dedication but posed for the ceremony.

Ever since ground was broken for the $7 million project in early May 2019, Funkhouser’s fitness walkers have watched the project develop. They even photographed a large six-spotted fish spider on the bridge railing.

“We’ve watched it all happen,” Funkhouser said. “It’s such an inviting place.”

Student Cassie McCombs, 12, described the new bridge “amazing, beautiful, and cool. I like how they made it.”

As the mayor explained, the bridge helps with flood mitigation and allows room for boaters. It’s also historical, Snedecor added, as support logs from the previous bridge, possibly 100 years old, were discovered.

The Wisconsin Street bridge is the next proposed project, but that work may be 1 1/2 years away, the mayor said.

Praising all those involved in the Third Street bridge, Snedecor said, “When you get groups together for a common goal, you get things accomplished.”

The project replaces the existing bridge with several pre-cast concrete culverts that nearly double the span of the structure and increases boating clearance by nearly 5 feet. The new bridge has a brick façade with limestone accents, new lighting, and ornamental railing. In addition, the sidewalk has been replaced; stormwater improvements have been made; and a pedestrian walking trail has been installed.

City Engineer Phil Gralik said the city is seeking funding to connect the new bridge to the downtown amenities behind City Hall.

John Mackanin, president of ICC Group of Elburn, Illinois, general contractor for the bridge, cited the project’s “excellent design and attention to detail.”

Lake County Councilman Ted Bilski, a Hobart native, said the bridge reflects “what a city with a lake can do.”

Lake County provided $1.5 million to the project, and Bilski projected the investment will return to the community threefold.

“The lake offers so much to our residents,” Bilski said.

Snedecor said that in addition to the county, Hobart’s Stormwater District Board provided another $3.5 million, with the city paying the remaining $2 million.

The new bridge was a dream of former Hobart Councilman and Board of Works member Tom Ehrhardt, who retired in January.

“This is needed,” Ehrhardt said. “For a while we were moving away from the lake. Now we’re coming back to the lake.”

5 stories to know from the weekend: Third Street bridge hailed as downtown 'centerpiece'

Psaki on gasoline shortage: 'The end is in sight'

Psaki on gasoline shortage: 'The end is in sight'

That project has closed portions of Center, Front and Main streets north of Second Street.

The Third Street bridge project isn't yet finished, but the city is already noticing how it is helping to reduce flooding around Lake George

HOBART – The Third Street bridge replacement project is expected to get underway Monday, starting a lengthy closure to traffic between East Pa…

HOBART — The city's Third Street bridge replacement will need to be rebid next year.

Hobart Mayor Brian Snedecor addresses the dedication ceremony Friday for the Third Street bridge project. Construction of the $7 million project began last May, replacing the existing bridge and adding some enhancements to the downtown area.