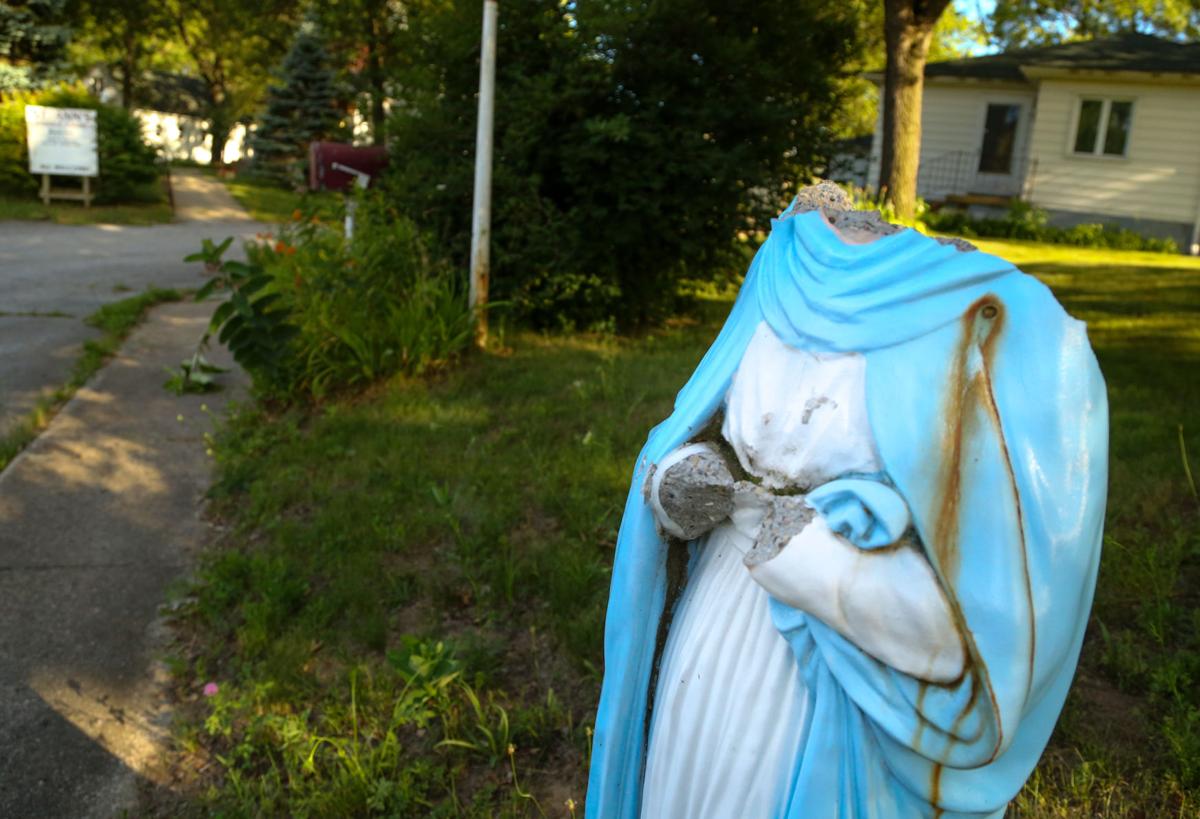 Church leadership at St. Ann Church in Gary's Black Oak neighborhood allege vandals damaged a statue of the Virgin Mary on the night of July 2. 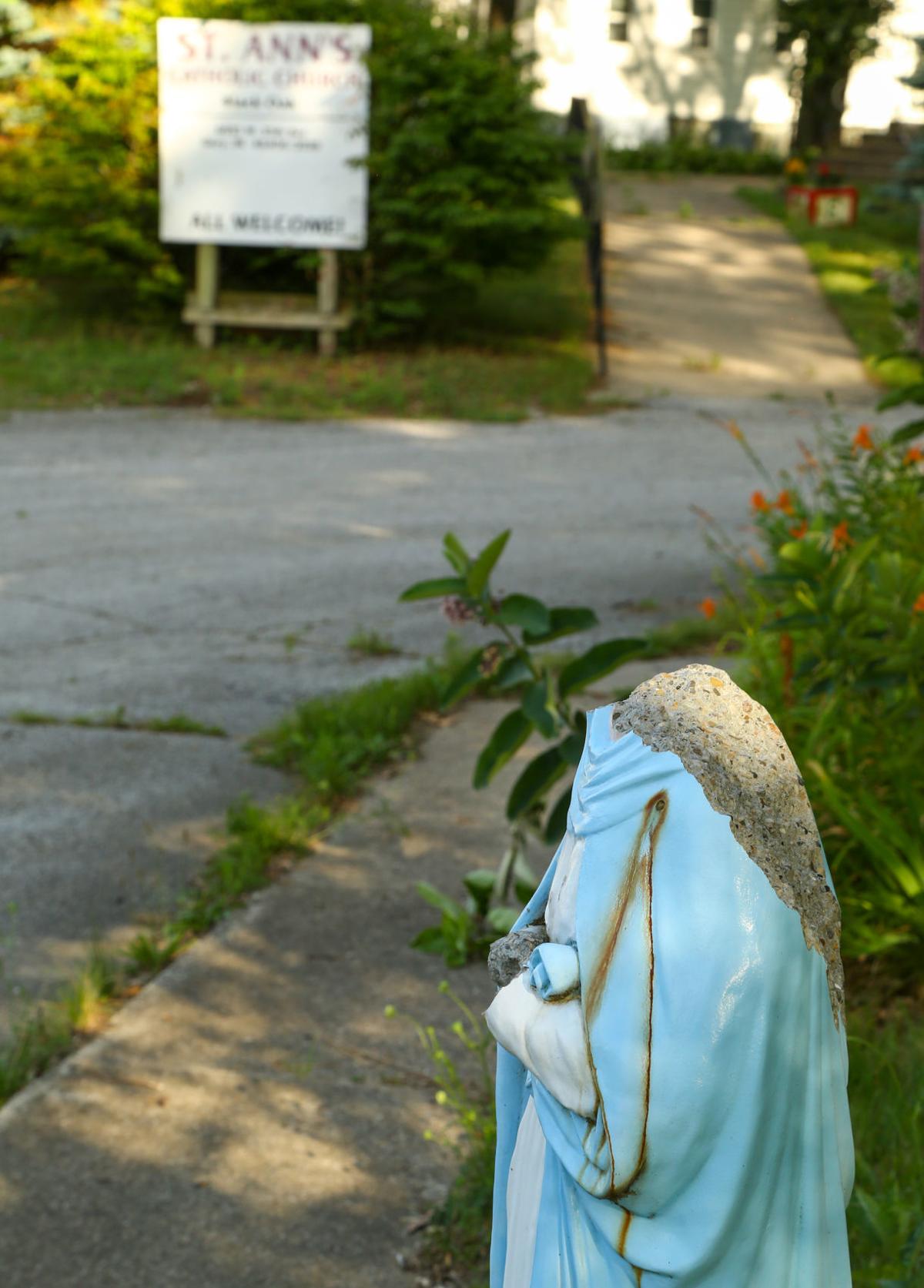 Church leadership at St. Ann Church in Gary's Black Oak neighborhood plan to repair a statue of the Virgin Mary that was damaged on the night of July 2. 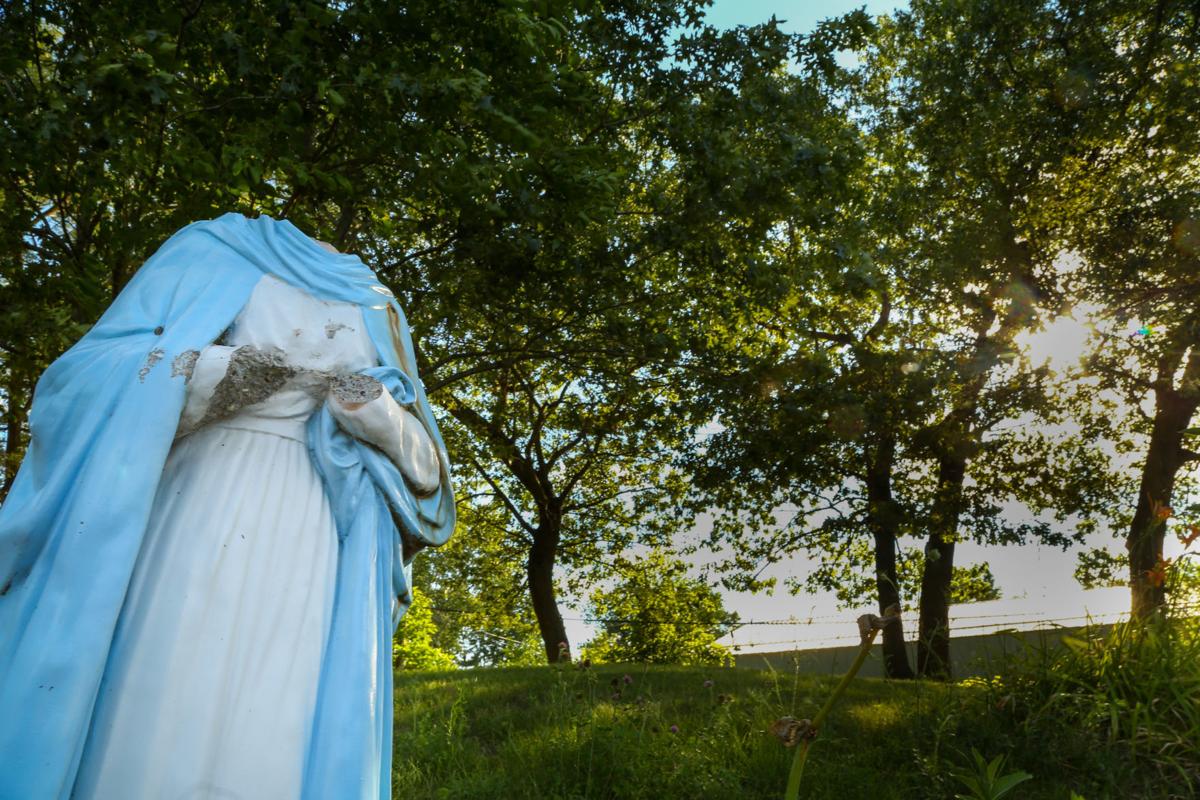 A statue of the Virgin Mary at St. Ann Church in Gary's Black Oak neighborhood was vandalized on the night of July 2, church officials said.

GARY — The Rev. Joseph Uko made a disheartening discovery when he returned to St. Ann Church on July 3 after celebrating a Mass in Crown Point.

Uko, the priest-in-residence at St. Ann, 6025 W. 25th Ave., found the church's outdoor statue of the Virgin Mary in pieces, its head and hands separated from the body. Deacon Phil Muvich from the church and Gary Police were also at the church, he said.

"It was something that could make me cry," Uko said. "How could somebody do that? With the fear of God and the sense of the sacred?"

Uko said a police report for vandalism was filed the same day with Gary Police. Cmdr. Jack Hamady said a call was received around 9:18 a.m. July 3 from the church in regard to the statue vandalized on its northwest side.

Church leaders believe one or more people wrecked the statue during the night of July 2 or in the early morning on July 3.

Parishioner Rosemary Muniz first alerted Paula Hammersley, the director of religious education at the church, about the vandalism that morning. She called and texted over photos. Hammersley then informed police.

The particular statue was a longtime cherished fixture at St. Ann Church, said Colleen Rabine, director of communications for the Diocese of Gary.

"The people of the Diocese of Gary are saddened by the destruction of this beautiful depiction of the mother of Jesus that has been a signature landmark at the parish for decades," she said. "It is unclear what happened, but we pray for St. Ann parishioners and for the conversion of heart for those responsible for the damage."

The statue measures about five or six feet tall, and is a site some parishioners like to come and pray at, Uko said.

Uko says he chose to have the statue's body, missing its head and hands, propped back up for parishioners and the community to see the damage until it is later taken away for repair.

"People do commit crimes, but I didn't expect it to happen in a place like this," he said. "This one (suspect) is just coming to destroy. What does a person gain by coming to destroy a statue that has been there for years? That is disturbing."

It is unclear when the statue will be repaired, but Hammersley, said parishioner Eustacio Dorado, of Gary, would make an attempt to fix it.

"Regardless of what happened, it tends to bring people together because everyone sees Mary as their mother," Hammersley said. "Even though we found Mary broken, we will pray for the person who did this because they’re broken or lost."

Uko also said the church is seeking donations to help purchase a security system. Anyone wishing to donate may reach out to the parish's office, located in Griffith, at 219-924-4163.

Chapel of the Resurrection

Cathedral of the Holy Angels

The alleged shooter, who was apprehended on scene when police arrived, "indicated he was responsible for the actions," police said.

The boy, who was taken to the Porter County Juvenile Detention Center, is charged under the new law of offense against a computer user, Valparaiso police Capt. Joe Hall said.

"(The alleged victim) stated Felicia (Williamson) only gets like this when she has been drinking 'fireball,' " according to the incident report.

New charging documents reveal details of the investigation into a Wednesday double shooting in Valparaiso.

Pain lives on nine years after Amanda Bach murder, but so does awareness of dating violence

"The time has passed quickly but it seems it could have been just yesterday," Sandy Bach said.

Joseph Scott told police he was at the apartment when he heard the man tell his mother, "See, now you need your (expletive) whooped," according to charging documents.

Man calls for help, later dies after being shot on Borman Expressway

Indiana State Police responded about 11:30 p.m. to the expressway, near the Ripley Street exit ramp, after the victim reported he had been shot.

Church leadership at St. Ann Church in Gary's Black Oak neighborhood allege vandals damaged a statue of the Virgin Mary on the night of July 2.

Church leadership at St. Ann Church in Gary's Black Oak neighborhood plan to repair a statue of the Virgin Mary that was damaged on the night of July 2.

A statue of the Virgin Mary at St. Ann Church in Gary's Black Oak neighborhood was vandalized on the night of July 2, church officials said.