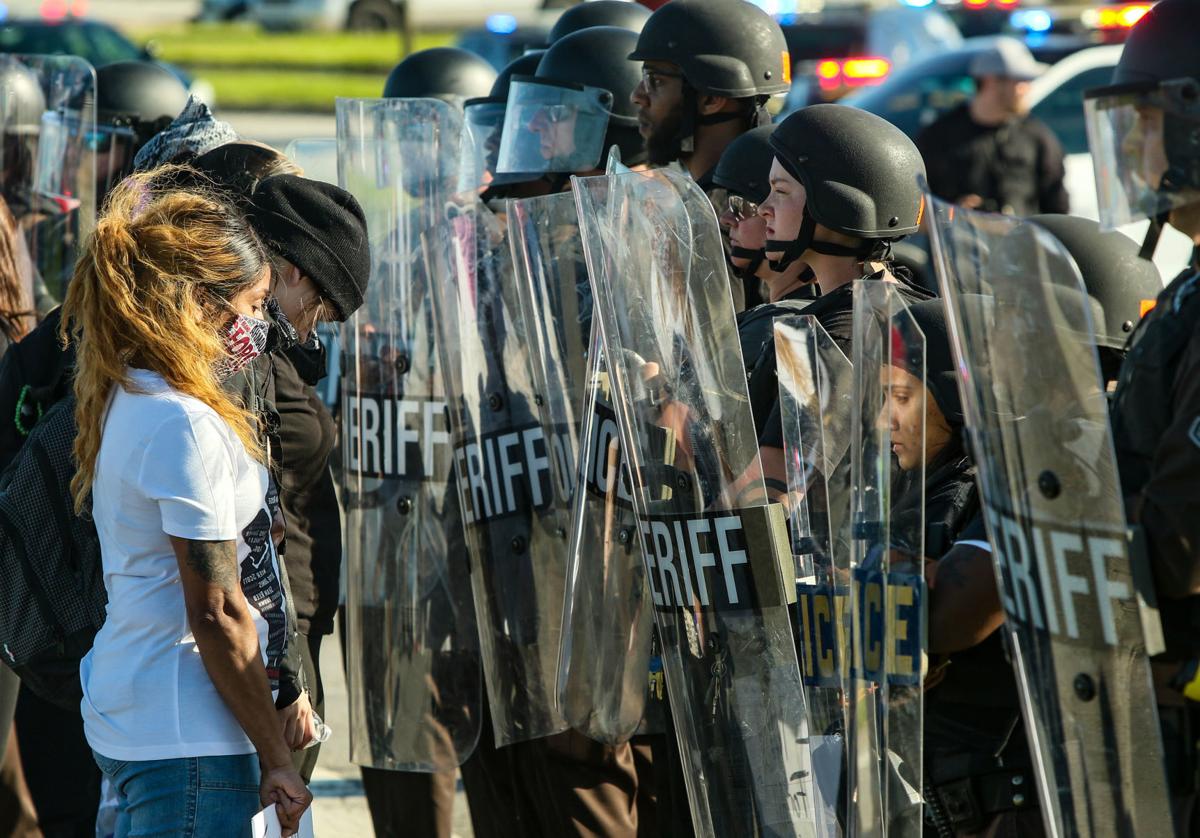 Demonstrators stand toe to toe with police during Sunday's protest at Southlake Mall in Hobart. 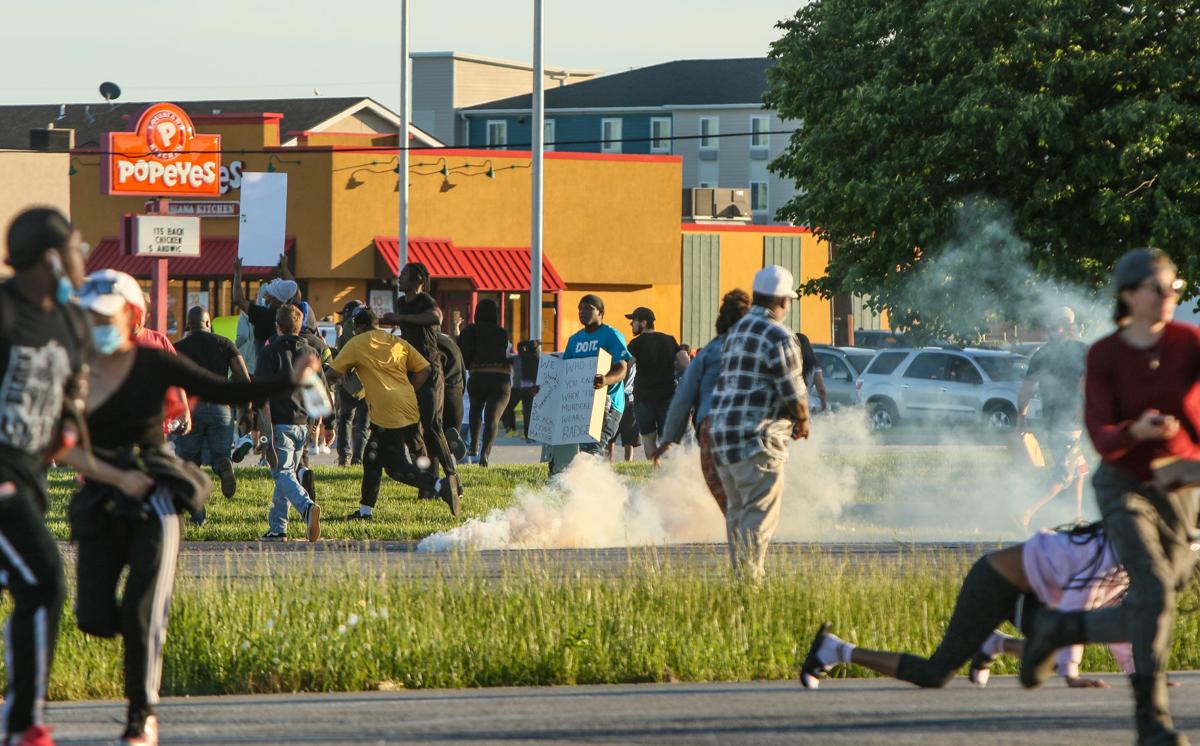 Tear gas canisters are deployed around U.S. 30 near Mississippi. 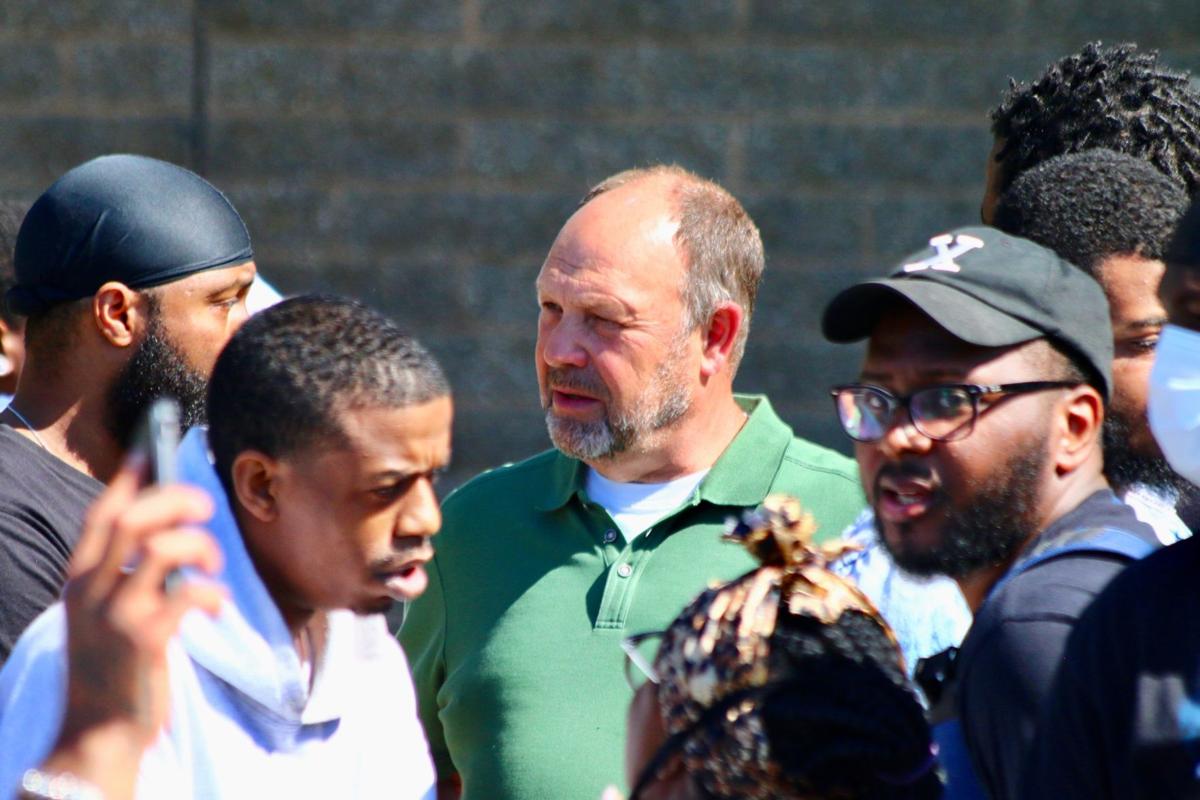 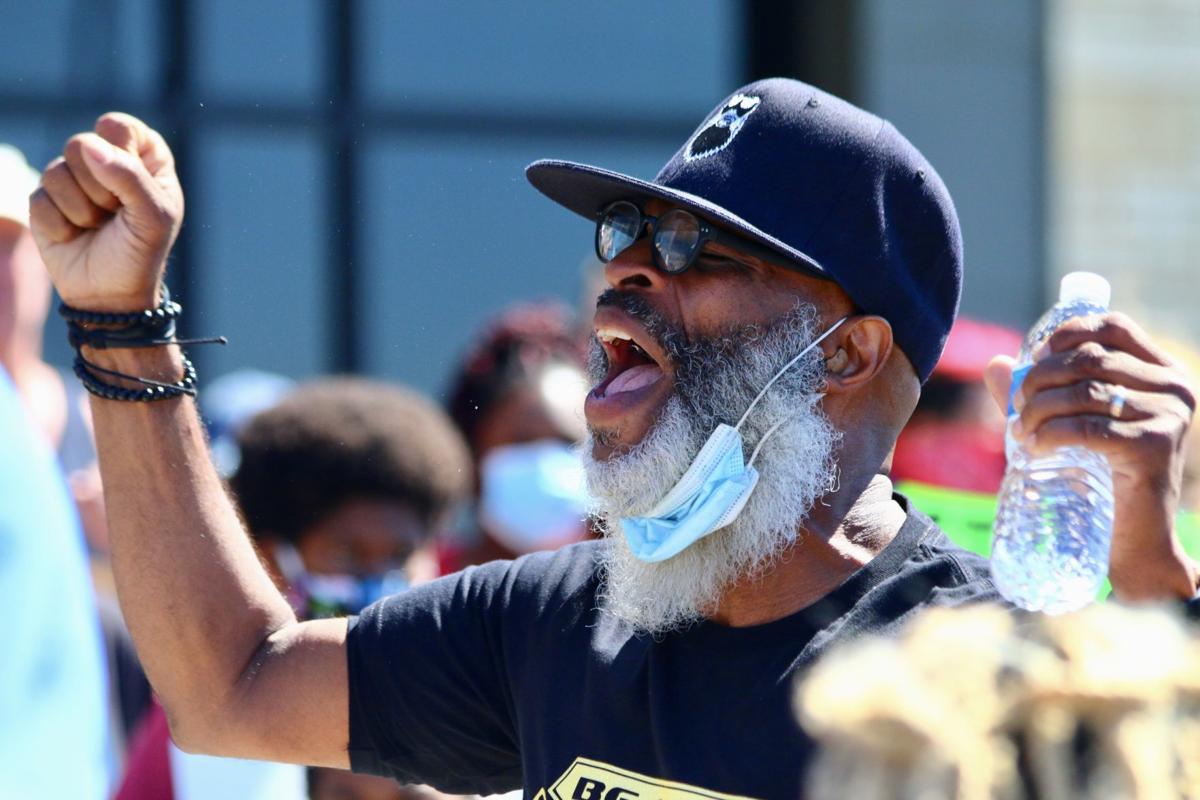 A protester addresses a rally calling for justice for George Floyd at Southlake Mall on Sunday. 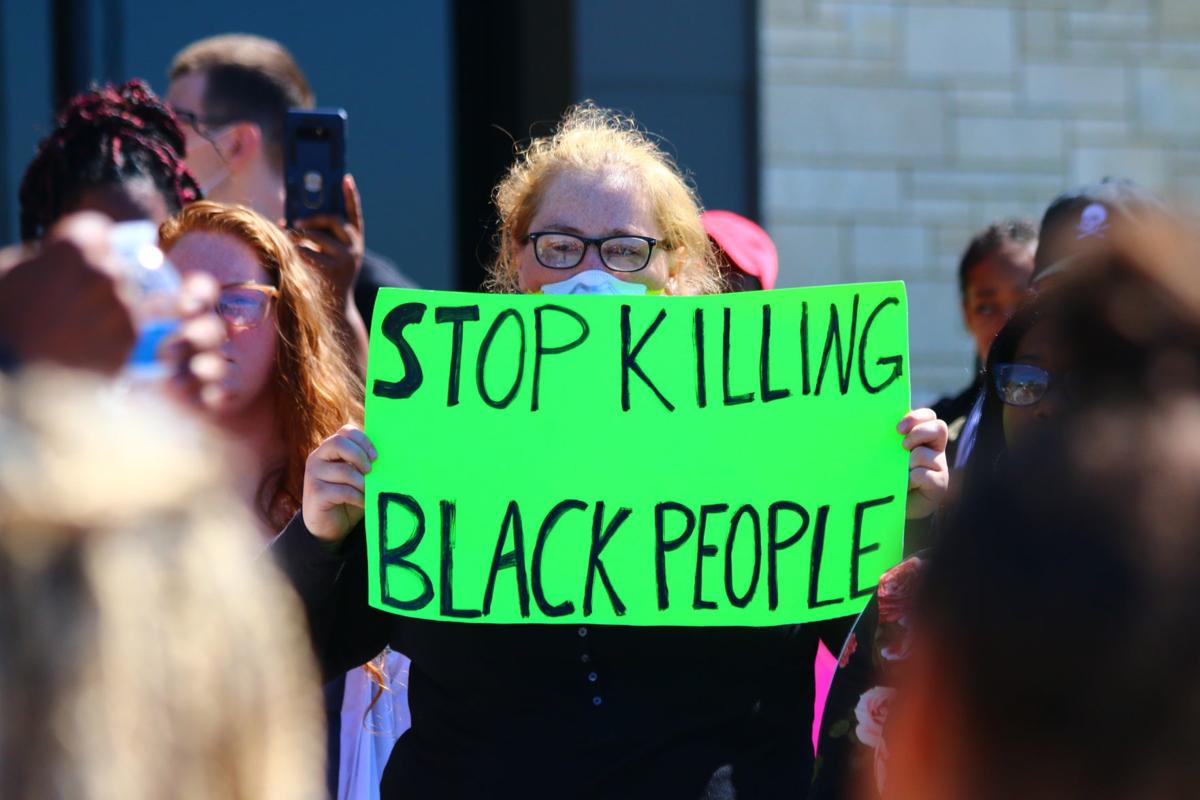 A protestor displays a sign during a rally calling for justice for George Floyd at Southlake Mall on Sunday. 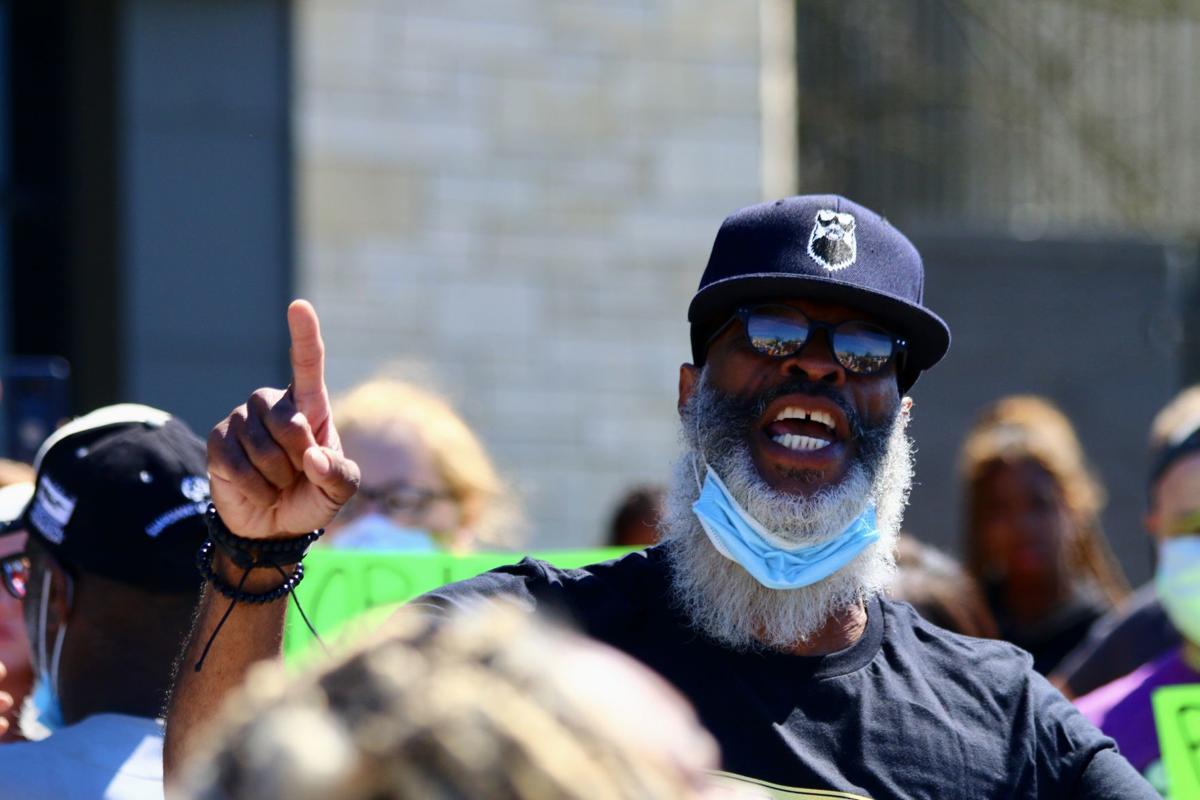 A protester makes a point during a rally seeking justice for George Floyd at Southlake Mall on Sunday. 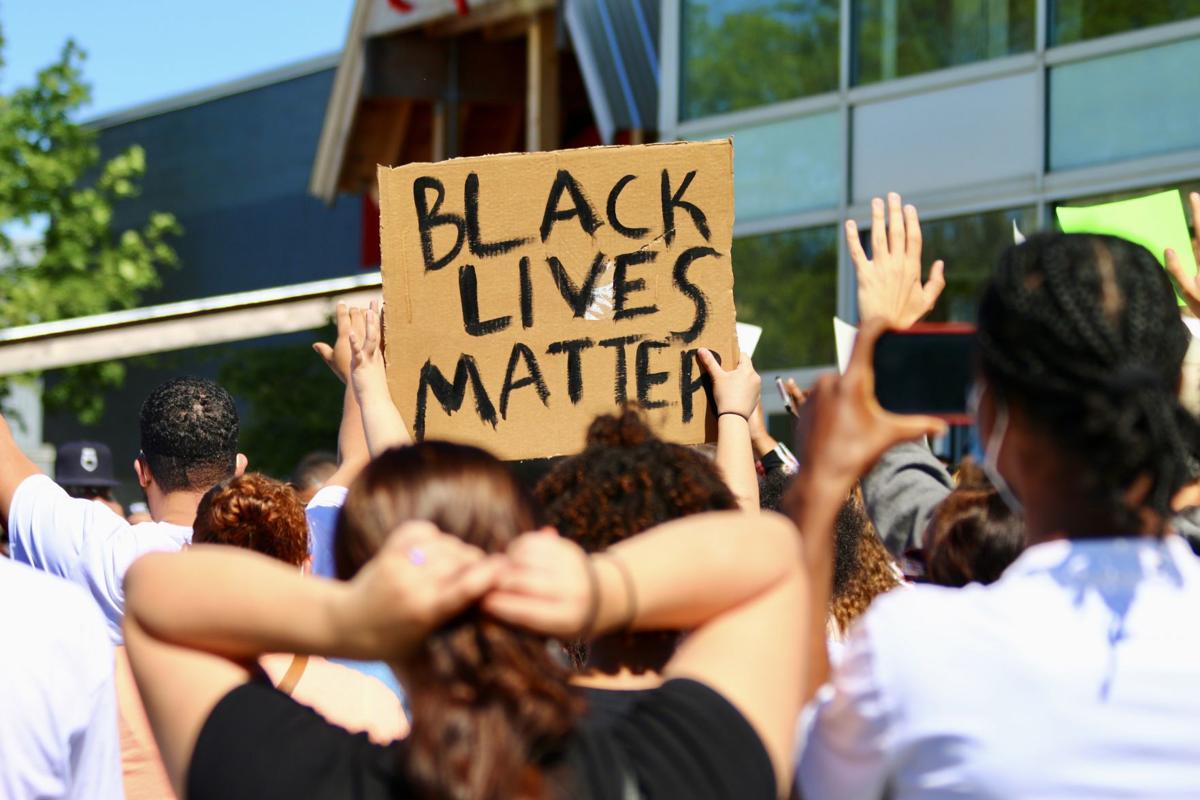 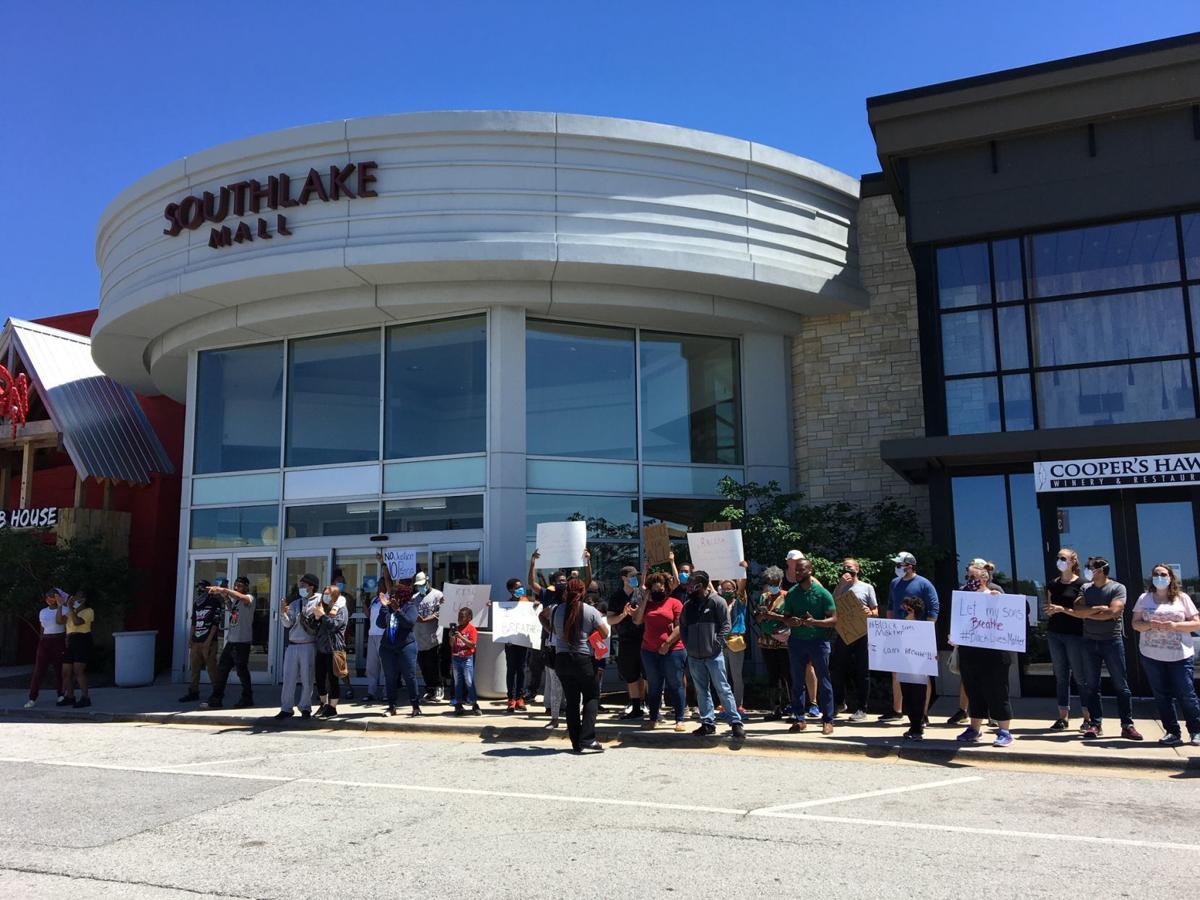 Protesters gather on Sunday at Southlake Mall in Merrillville. 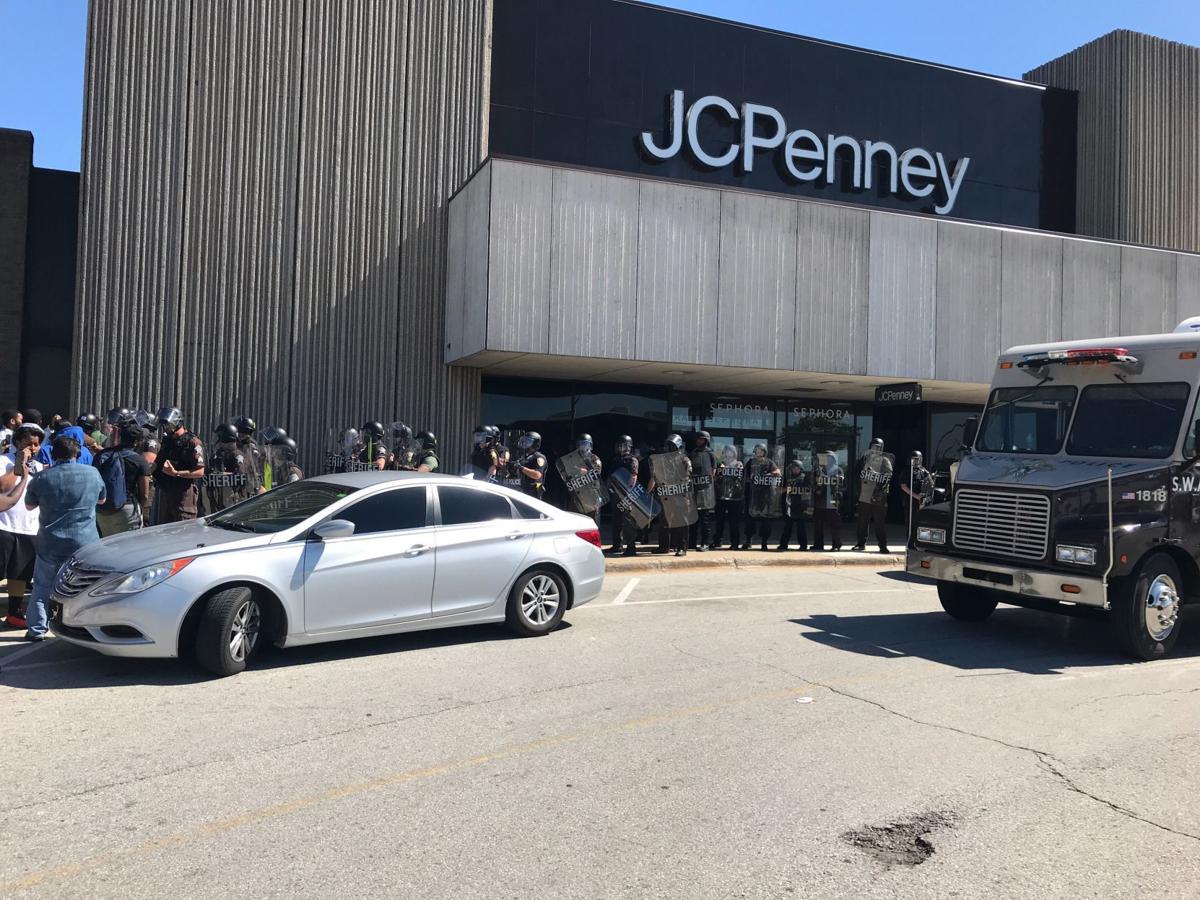 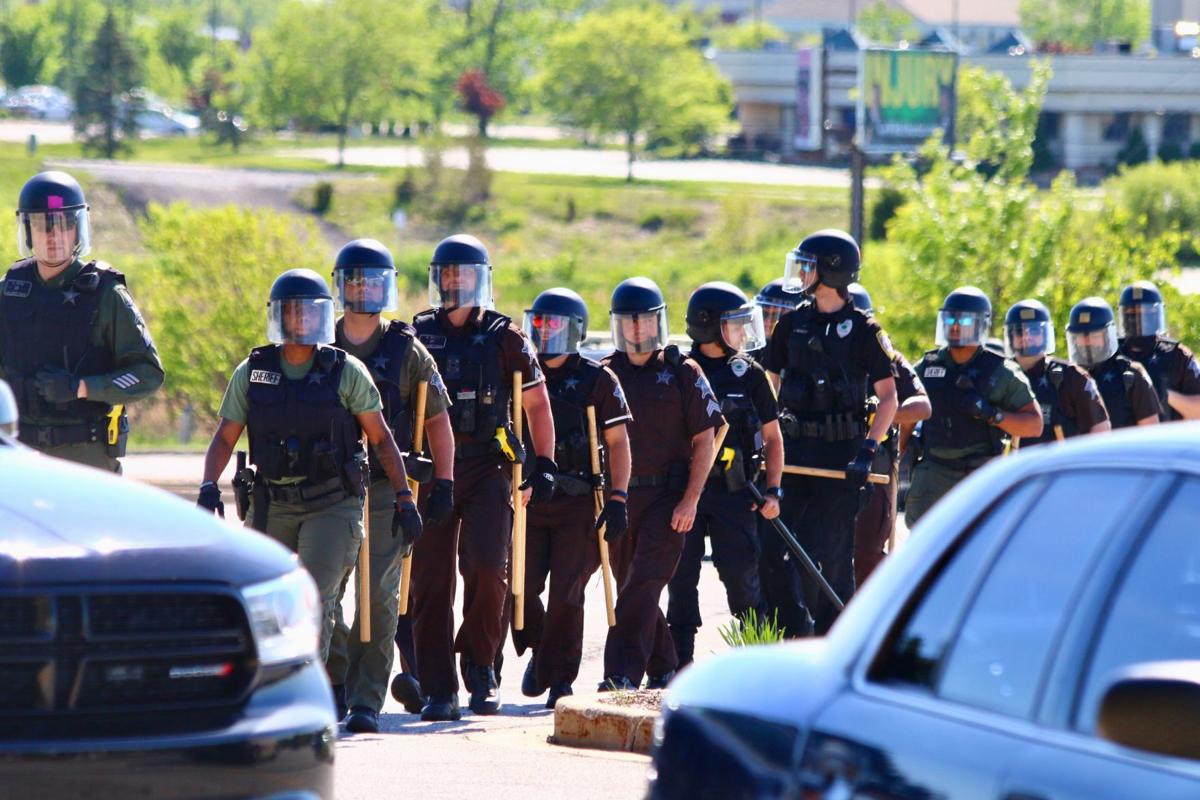 Police tactical teams move into place during a rally seeking justice for George Floyd at Southlake Mall on Sunday. 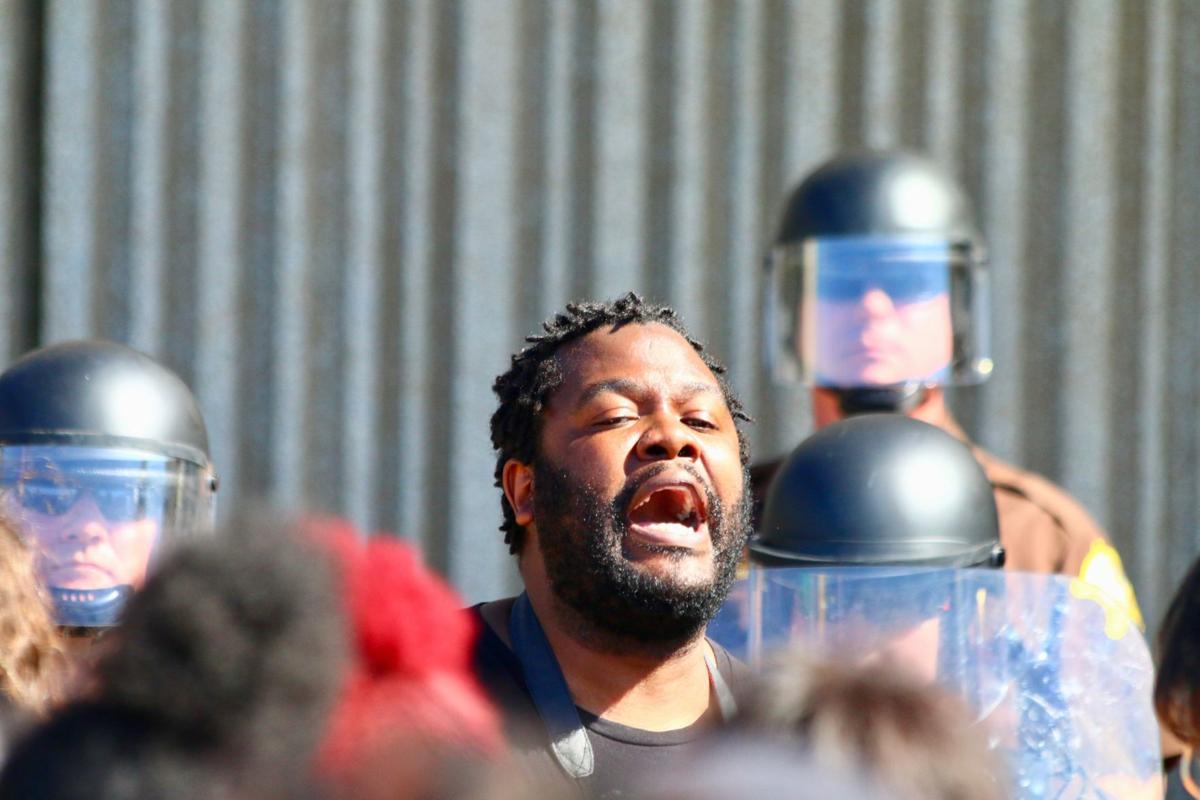 A protester reacts to police presence during a rally seeking justice for George Floyd at Southlake Mall on Sunday. 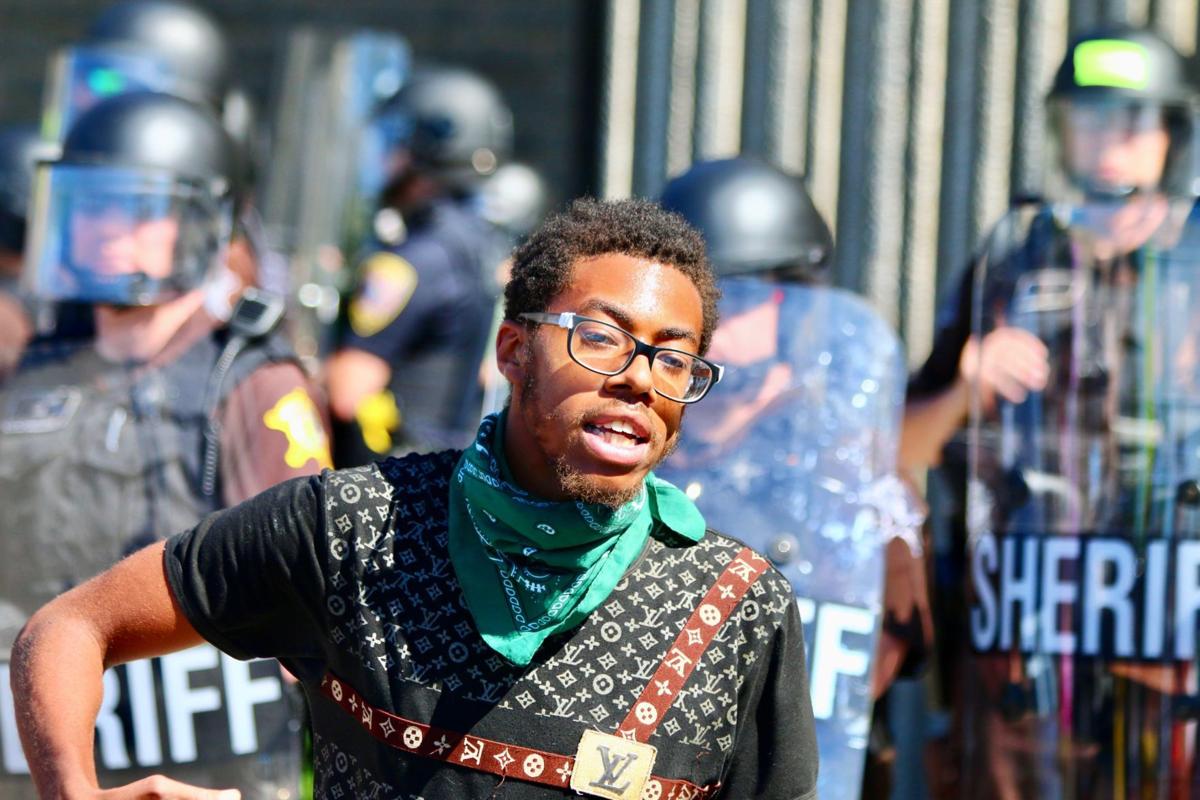 A protester confronts police officers during a rally seeking justice for George Floyd at Southlake Mall on Sunday.

HOBART — A lengthy rally at Southlake Mall seeking justice for George Floyd came to a chaotic end Sunday evening as police took people into custody and apparently fired tear gas and rubber bullets into the ground to prevent protesters from marching toward I-65.

Police were telling people near Southlake Mall to leave the area or they would be arrested.

The police presence included two helicopters and a drone, as well as several K-9 units.

Lake County Sheriff Oscar Martinez said some protesters removed nozzles from pumps at a Luke gas station near the mall and let gasoline run onto the ground, apparently with the intention of igniting it. Martinez said a sheriff's department tactical team stepped in and made at least one arrest.

Officers were onsite at noon prior to the 1 p.m. event, which had 10 arrests throughout the day, Martinez said. Arrests included four juveniles, he said.

“I’m proud of the way, once again, that Region law enforcement worked together to keep this from being much worse," Martinez said. "These guys did an incredible job.”

Earlier, protesters had left the main rally site near the north entrance of  Southlake Mall, marching toward US 30 and shutting down traffic in both directions for several hours.

The action triggered an outburst among the crowd of protesters who had been moved off US 30 to the north in a tense face-to-face standoff.

Martinez said the county’s tactical unit was brought in a couple hours into the protest after peaceful protesters began leaving and there was word among the crowd and social media for potential violence to the mall.

“Let’s burn this thing down,” was the message, he said.

The county has 80 to 90 officers at the scene, assisted by Merrillville, Hobart and Indiana State Police.

Hobart Mayor Brian Snedecor was on scene earlier trying to disperse the crowd.

Martinez said he was proud how well officers have conducted themselves with protesters.

“The last thing we want is what see all over this country on TV,” Martinez said.

Earlier in the day, organizer Kenny G. Ford, of Hobart, held his phone up to broadcast live on Facebook to make sure “everyone’s straight,” and claimed to have shut down the mall. The mall recently reopened after being shut down by the COVID-19 pandemic.

“I need a fair shot,” he said. “Justice needs to be served.”

One motorist from Indiana stopped to make sure there was going to be no violence before joining the protest.

Police gathered at the south side of the mall, and squad cars circulated around the building.

The racially mixed crowd grew to more than 300 protesters outside the mall with chants of “I can’t breathe” and signs reading, “silence is violence” and “let my sons breathe.”

“Our goal is just to get a message out — the message is community. We miss community.”

Media advertise a life not available to many in the black community, he said.

“It’s all about turning the negative into a positive," Clemons said.

Gary resident Justin Jeter, who said he has served eight years in the Army, said he has been pulled over and faced other forms of injustice just for being black.

“All lives can’t matter until black lives matter,” he said.

Dyer resident Stephanie Embro, who is white, was handing out water she donated to the protest.

“Black lives matter,” she said when asked about her involvement.

Jacobsen, who is white, said he took part in the protest out of “love for my black brothers and sisters.”

But seeing the communal pain up close changes the heart, he said.

Jacobsen said he has seen fear among white people on social media in the wake of the protests over the death of George Floyd.

The group chanted, “No justice. No peace.”

Several prayer circles took place, including prayers for men and women, and an encouraging talk for children.

A Lake County Sheriff tactical unit vehicle pulled up and several heavily armed and geared officers piled out causing protesters to drop to knee and put hands up chanting, “No justice. No peace.”

A group of white bikers watching the protest from across the parking lot, who did not want to be identified, said they were there in support of police.

“What they’re doing in Illinois right now is ridiculous,” said one biker.

The nearby Target also was closed. Some protesters parked there and walked to the rally at the mall. Later, police went car to car in the Target lot telling individuals the lot was closed and asking them to leave.

Check back for more updates at nwi.com.

Hammond protests in solidarity with Minneapolis

Hammond protests in solidarity with Minneapolis