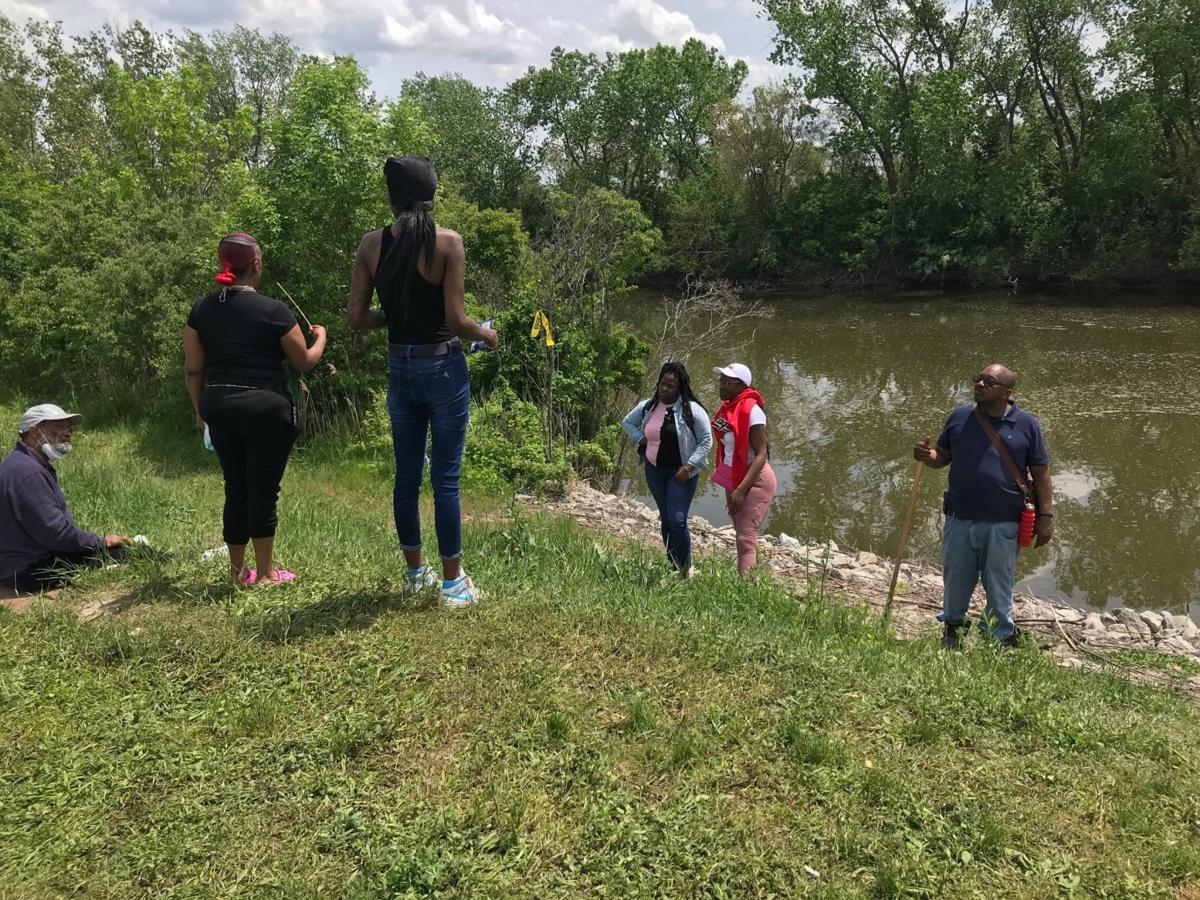 Searchers scour the banks of the Little Calumet River Thursday in Hammond in hopes of locating Kyrin Carter. 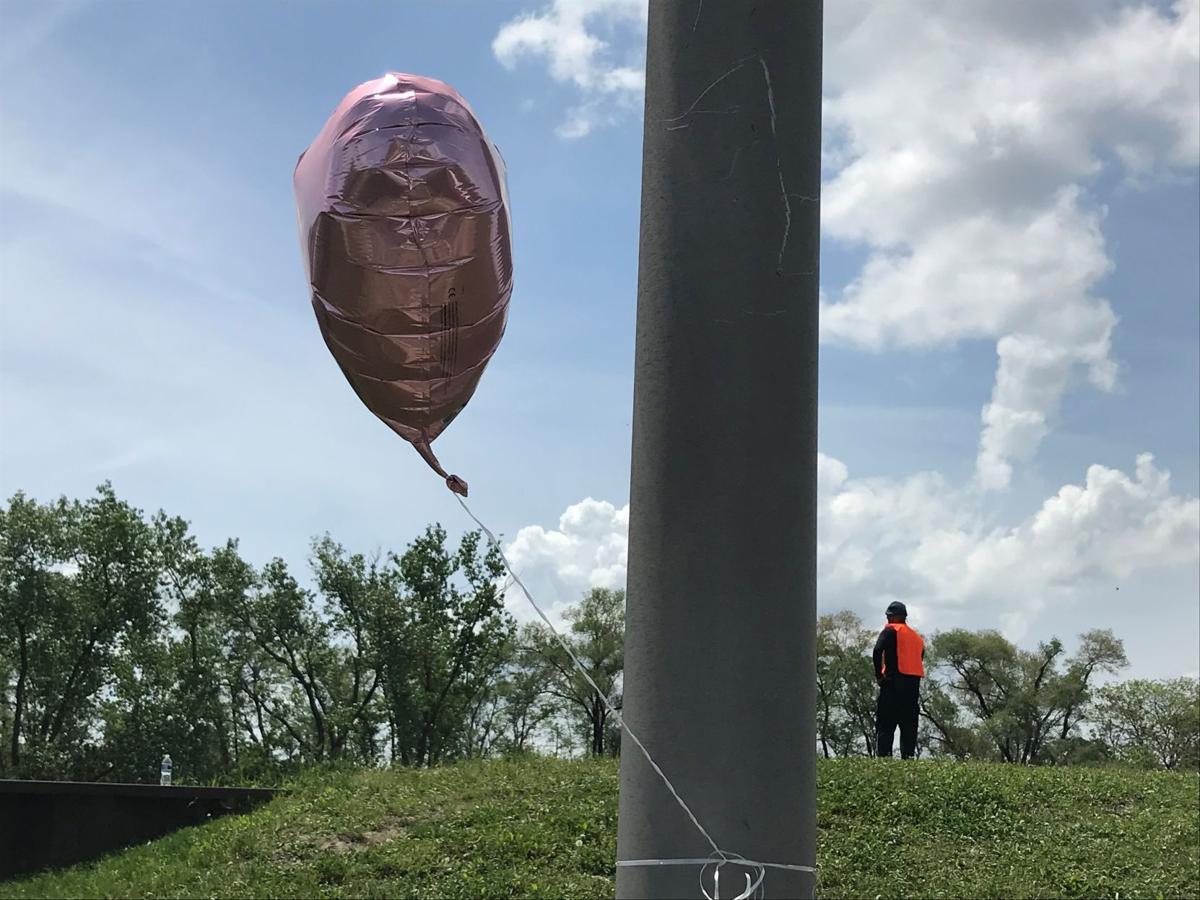 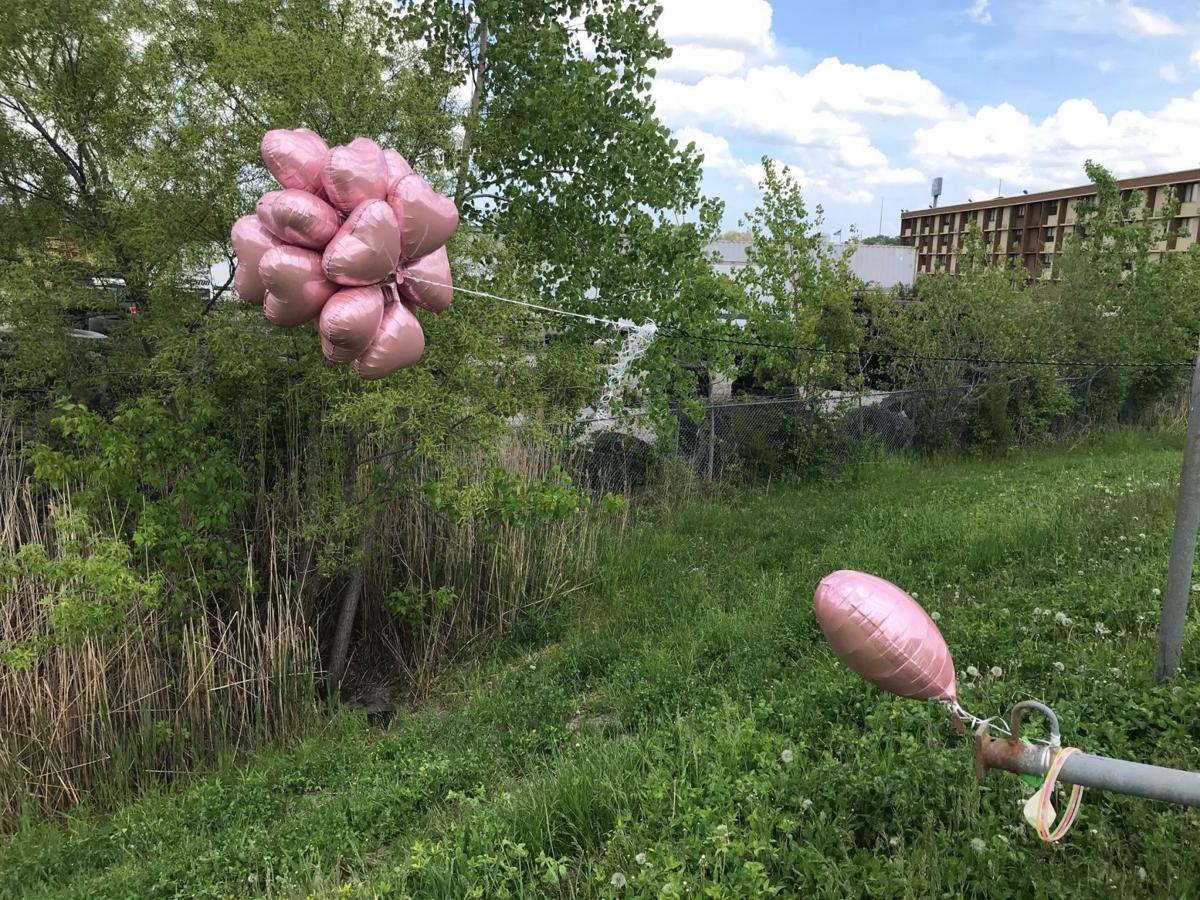 Balloons are strung along the Little Calumet River in Hammond in hopes of possibly catching Kyrin Carter's attention. 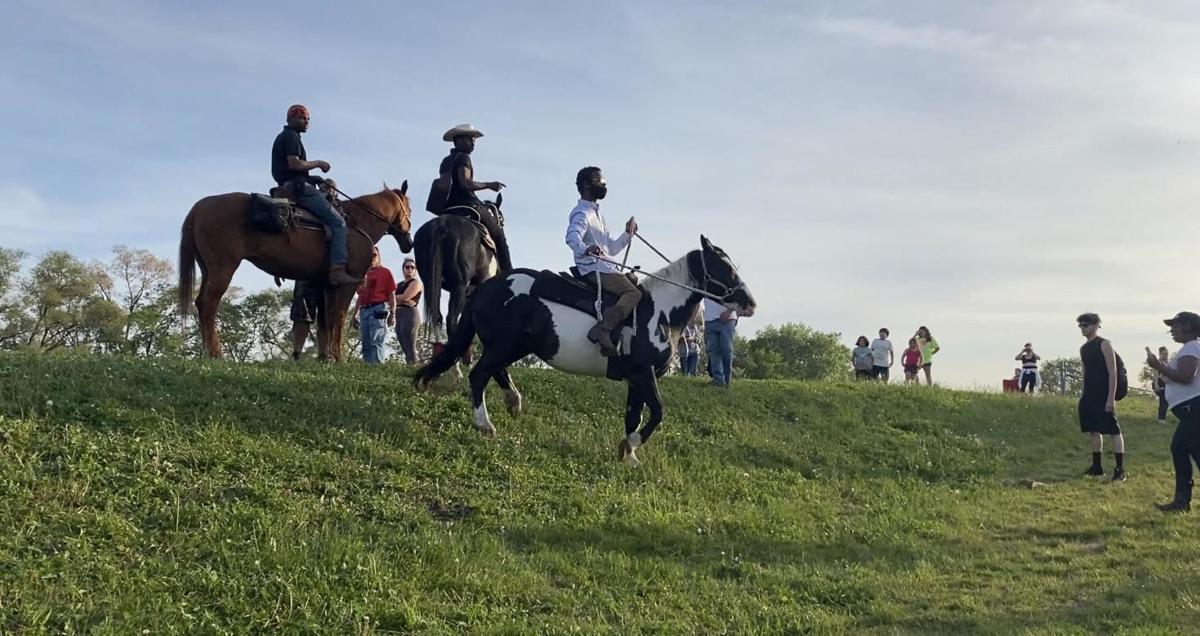 Individuals brought their horses from South Suburban Ranch in Lynwood to the Hammond hotel parking lot to ride along the river. 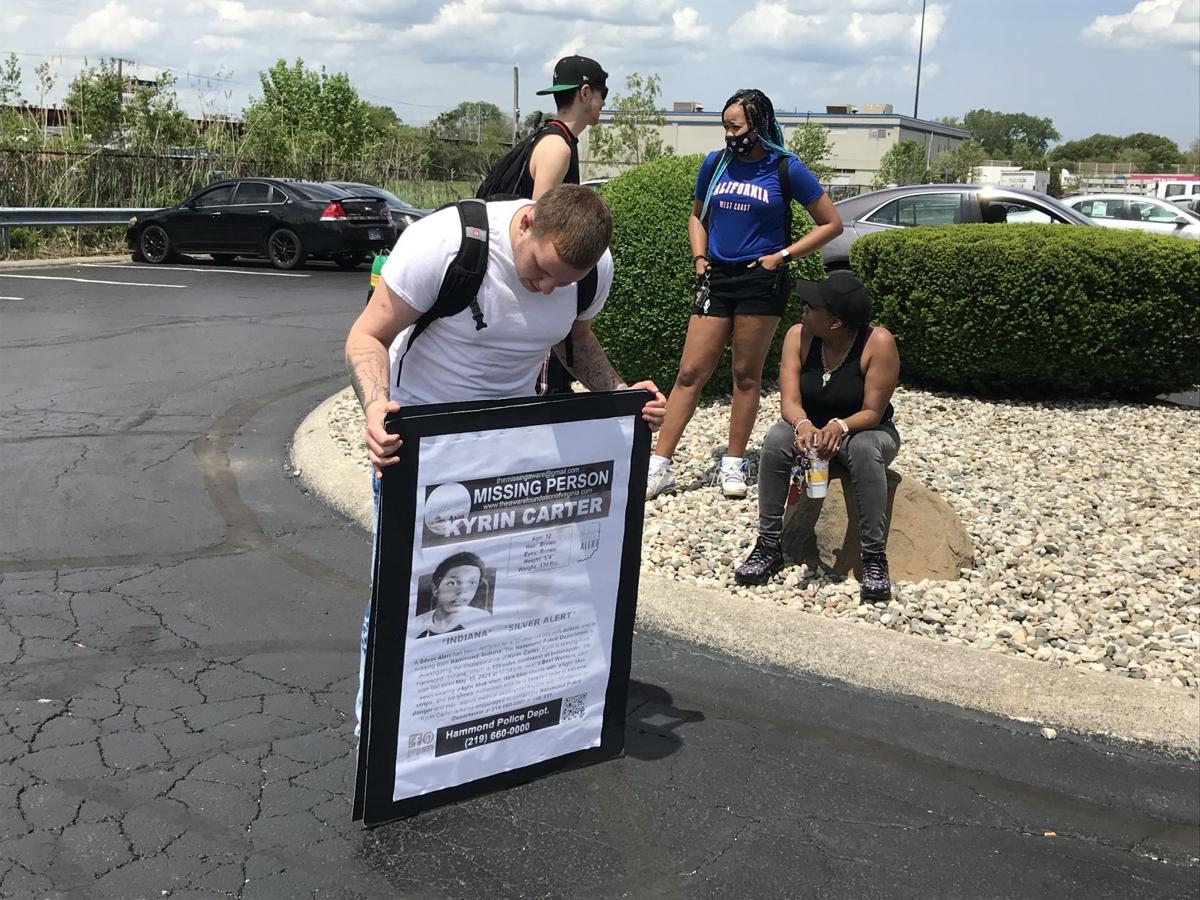 Hammond Police Lt. Steven Kellogg says the outpouring of support from civilian volunteers helping search for Kyrin Carter is unlike anything he's seen during his time with the department.

HAMMOND — Five days after 12-year-old Kyrin Carter went missing, the Little Calumet River and Hammond hotel he was last seen leaving is lined with hundreds of shiny pink balloons. As Thursday came to a close, the sun set on another day of continued search efforts.

Family members said pink was his favorite color, and they hope the balloons will draw him out where he can be spotted in the open.

For fellow searchers, the balloons serve as a reminder that Kyrin remains in the minds of a community that hasn’t given up hope.

“Seeing the balloons was touching to me,” said Leanne Curtis, of Merrillville. “I came out early one day and there was no one else out besides police and I was worried people had forgotten. Then I came back to see all of the balloons everywhere. It showed people are still caring. It gives me hope.”

Curtis is one of many people who have said that Kyrin’s story has weighed heavy on their minds since Saturday, when he went missing from the Best Western in Hammond. Hammond police are still focusing their efforts on the Little Calumet River, a portion of which borders the Best Western hotel where the 12-year-old boy was last seen.

On Thursday afternoon, a group on four-wheelers dispersed from the hotel parking lot to comb through more hard-to-reach spots along the river. The group of local ATV enthusiasts, called the 701 squad, is headed by a father of a child with autism.

”I’d be in pain if my son was missing,” the man said, who wished to remain unnamed. “I can’t stop thinking about it. ... We hope to find him alive, if that happens, I will cry for a whole month. We are going for a miracle.”

As the father of an autistic child, he said he limited the amount of the people and used a quieter model of four-wheelers to not scare the missing boy. He said hoping to find the child felt like hoping to win the lottery, but he was holding out hope.

“Before I leave, I tell my son, ‘I love you, and I’m going out to help find someone like you,’” he said.

Three horses joined the search efforts. Jaquan Wilburn, of Chicago, brought his horse Stormy to Hammond. He said being on horseback gives a higher advantage to see above tall grass and brush.

Cynthia Manuel brought two horses, Izzy and Roxy, from South Suburban Ranch in Lynwood. Manuel said she had a 12-year-old son as well and she was heartbroken after hearing of Kyrin’s disappearance.

“We will be able to cover more territory because horses have a longer stride, and you can keep riding for hours,” Manuel said. “Perhaps (Kyrin) will see them and won’t be intimidated.”

Hammond firefighters were out by the Little Calumet River scanning the the banks. Conservation Officer Tyler Brock, of the Indiana Department of Natural Resources, said the DNR continues to assist the daily efforts of local police and first responders.

Boats equipped with sonar have been patrolling the Little Calumet River spanning from Kennedy Avenue and Cline Avenue, as well as the nearby Oxbow pond near Kennedy Avenue. Despite their efforts, nothing has been found.

The Little Calumet River is 14 feet at its deepest points while other areas are shallow as a few feet, Brock said. The water is around 60 degrees. He said there are several challenges the DNR faces in a potential water recovery search of this particular area.

“There’s debris in the water and the visibility is very low, almost at zero visibility,” Brock said. “The depths of the water also presents a challenge to our sonar equipment. We also don’t know where or if he entered the water, it’s such a wide search area and it could be expanded.”

Brock said if other information comes through they will expand the search area but so far, the perimeters remain the same.

“It’s been a massive effort,” Brock said. “People have been doing everything they can and DNR will continue to assist in the search.”

Thursday's search marked a continuation of so far fruitless efforts to find the boy.

Despite no apparent leads so far, volunteers showed up in droves to aid in the ongoing race to find Kyrin.

Some volunteers present at Thursday's search expressed a shared sentiment of discouragement and frustration with the lack of developments.

Nevertheless, most are trying to remain hopeful.

Donald Pritchard, of Park Forest, has a 13-year-old son who, like Kyrin, is autistic. Pritchard said he has been searching around the hotel and in other portions of town for four days.

At this point, he said, he's beginning to lose hope.

He said he feels dismay at what he considers a lack of communication between investigators and civilian searchers.

"Just tell us something," Pritchard said, exhausted, having been searching since 5 a.m.

Pritchard believes Kyrin may have been fascinated with, and even compelled, to go toward the water.

"I believe he's in there," Pritchard said. "Special needs kids ... they have a routine. They're curious."

As a father of a special needs child, Pritchard said he felt compelled to devote his time to the search.

Some small, bright-colored stuffed animals were tied with some of the balloons, in hopes that the boy will be attracted to the area and subsequently spotted.

A large gathering of volunteers at one point set off in a long line of cars, some playing music, to continue their search.

Other volunteers have dressed in bright colors and backpacks with music speakers to broadcast music to try getting his attention.

Civilian searchers discussed things that were said to be his favorites, such as McDonald’s, chicken nuggets, Oreos, Sprite and other snacks in hopes they can lure him out if he is still in the area.

Joseph Myers, a Highland man, said he's doing his best to stay positive and hoping for the best positive outcome.

Like other searchers who spoke with The Times, Myers has a family member with autism. In his case, his great-grandson.

"It's very dear to my heart," Myers said, describing his feelings on Kyrin's absence. For that reason, he plans to spend his time looking for the boy "as long as it takes."

The day before, Kyrin's father, Leslie Carter, said he wouldn't stop looking for his son until he is found.

Since Kyrin Carter went missing Saturday, multiple agencies have searched the area daily in hopes of finding him.

First responders have searched several potential locations where Kyrin may have gone, based on the opinion of experts on the matter and evidence collected by investigators, Hammond police Lt. Steve Kellogg said.

Kellogg welcomed the help provided by civilian volunteers, saying they're unlike any he has ever seen before during his 24 years on the police force.

He did, however, caution people to be careful near the river and to let officers know if they see anything.

As of Thursday afternoon, Kellogg said there were no immediate updates to provide.

Police previously asked residents within a 3-mile radius of the hotel to review home surveillance video or doorbell cameras to check if Kyrin might have been in their area.

Residents were also asked to check any areas where a child could hide, including garages, in and under parked cars or boats, in public restrooms at parks, or any other area that hasn't been checked in a while, Kellogg said.

Anyone with information not related to Carter's immediate whereabouts is asked to call Detective Sgt. Nicole Duncanson at 219-852-2968. Anyone who sees Kyrin is asked to immediately call 911.

Searchers scour the banks of the Little Calumet River Thursday in Hammond in hopes of locating Kyrin Carter.

Balloons are strung along the Little Calumet River in Hammond in hopes of possibly catching Kyrin Carter's attention.

Individuals brought their horses from South Suburban Ranch in Lynwood to the Hammond hotel parking lot to ride along the river.

Hammond Police Lt. Steven Kellogg says the outpouring of support from civilian volunteers helping search for Kyrin Carter is unlike anything he's seen during his time with the department.