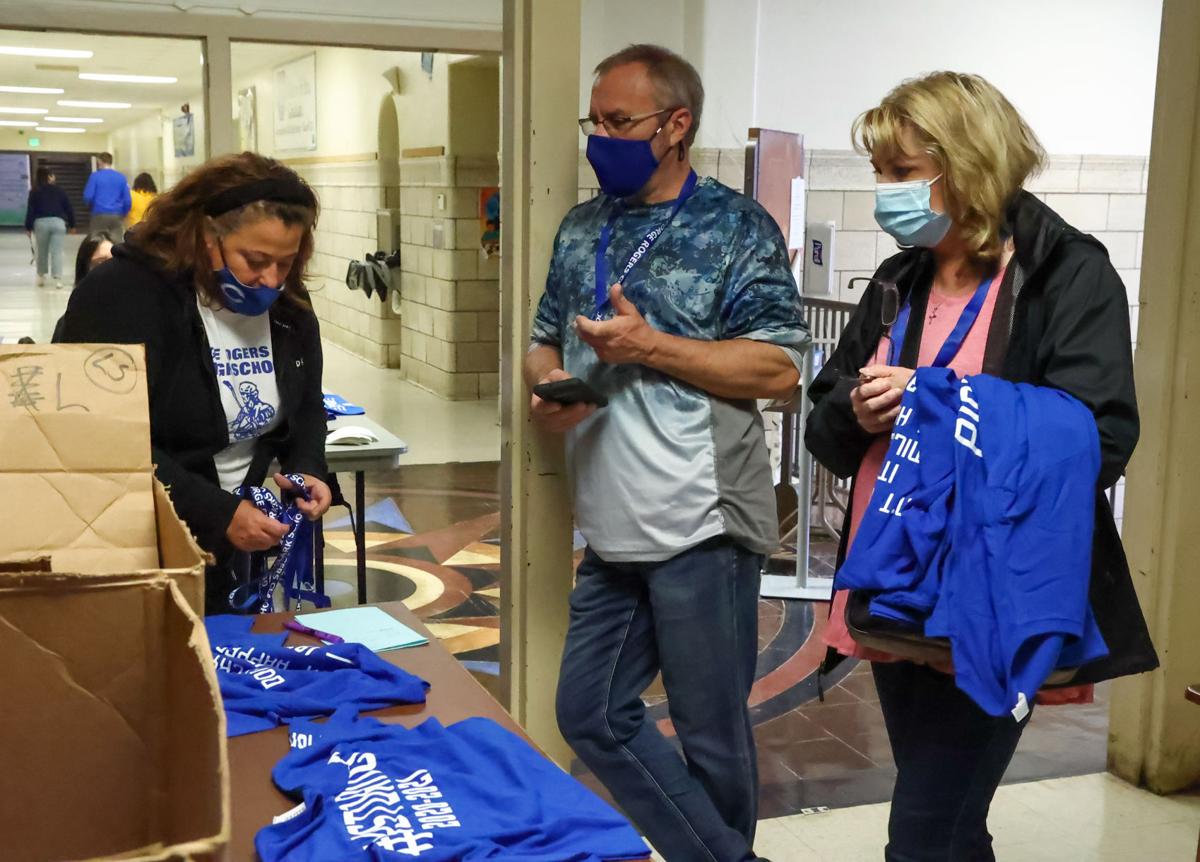 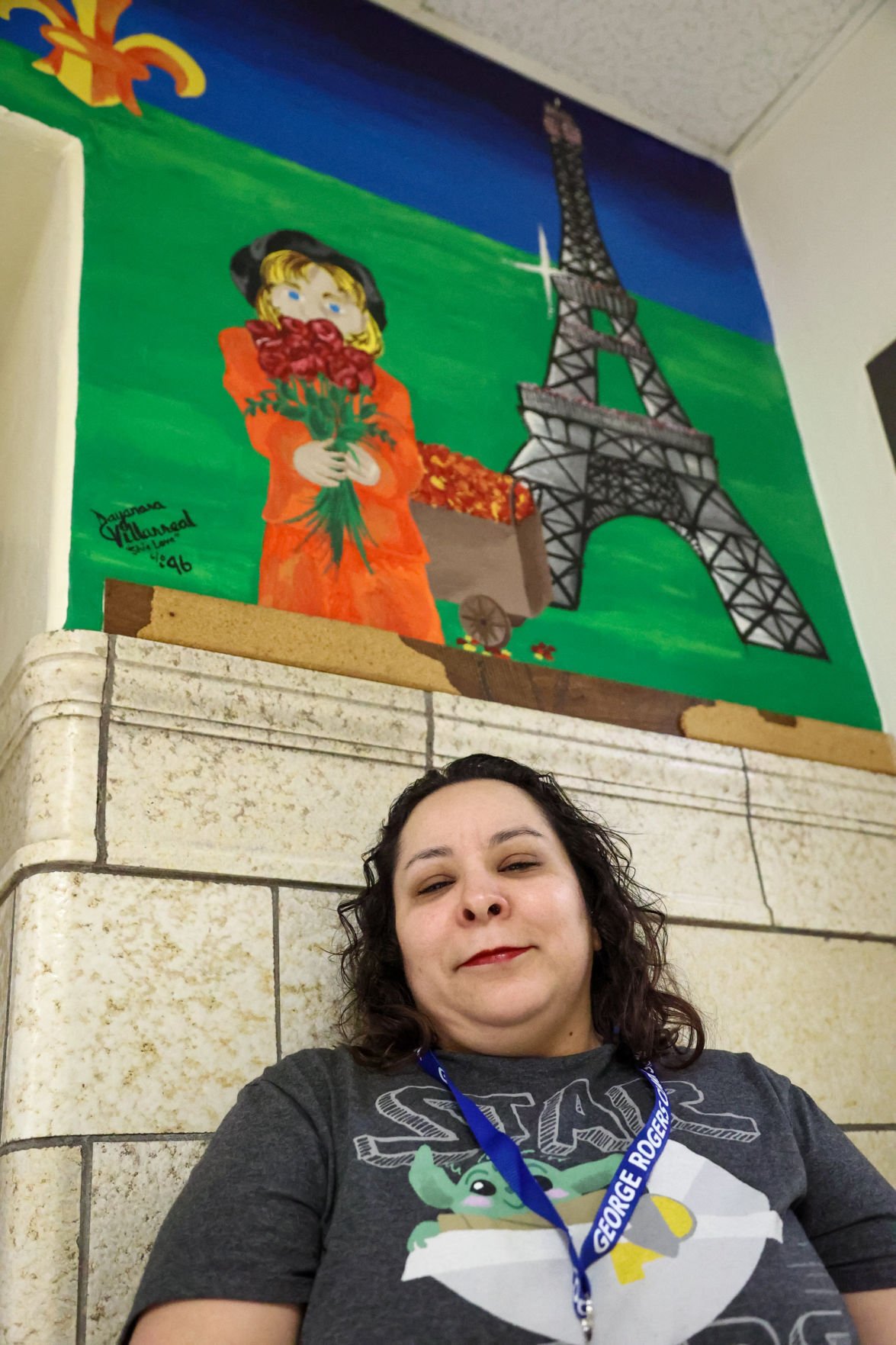 Clark Middle/High School alumna Dayanara Villarreal ('96), of East Chicago, poses next to a mural that she collaborated on that's by the entrance to her French class. 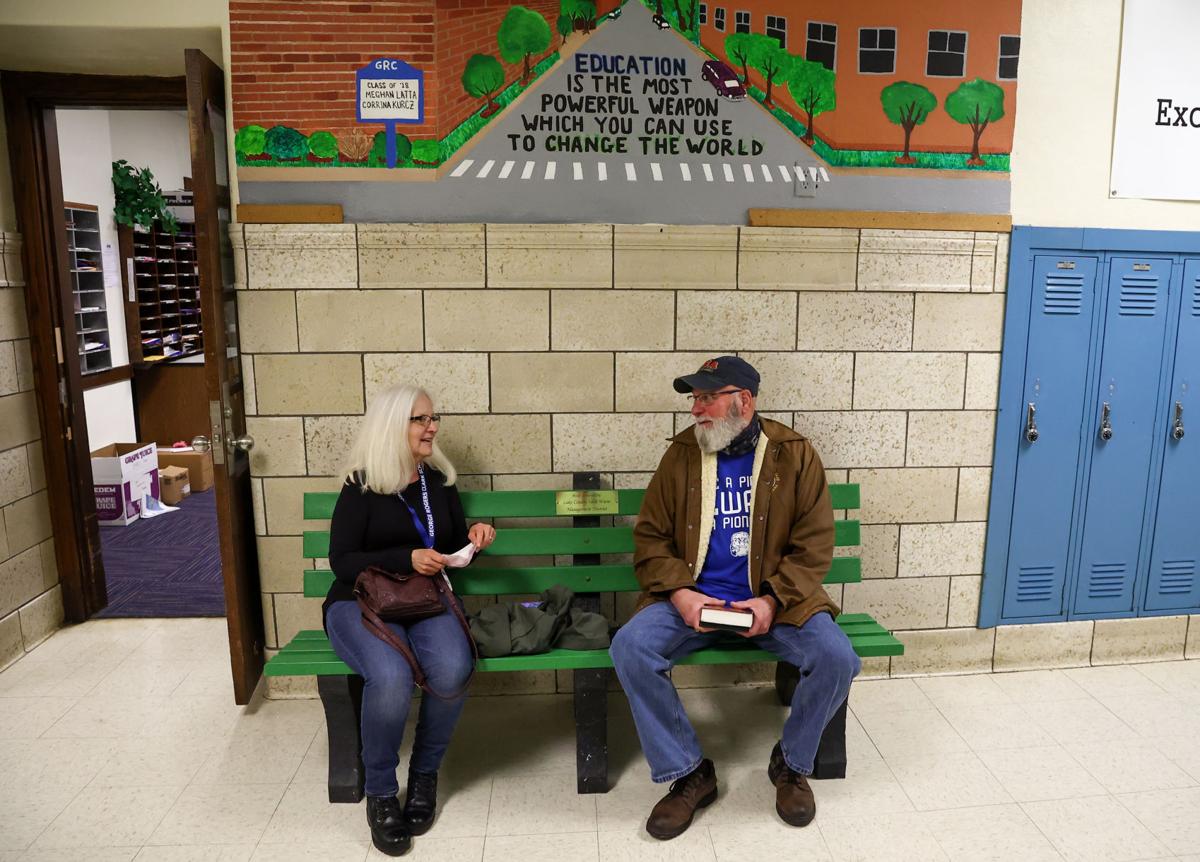 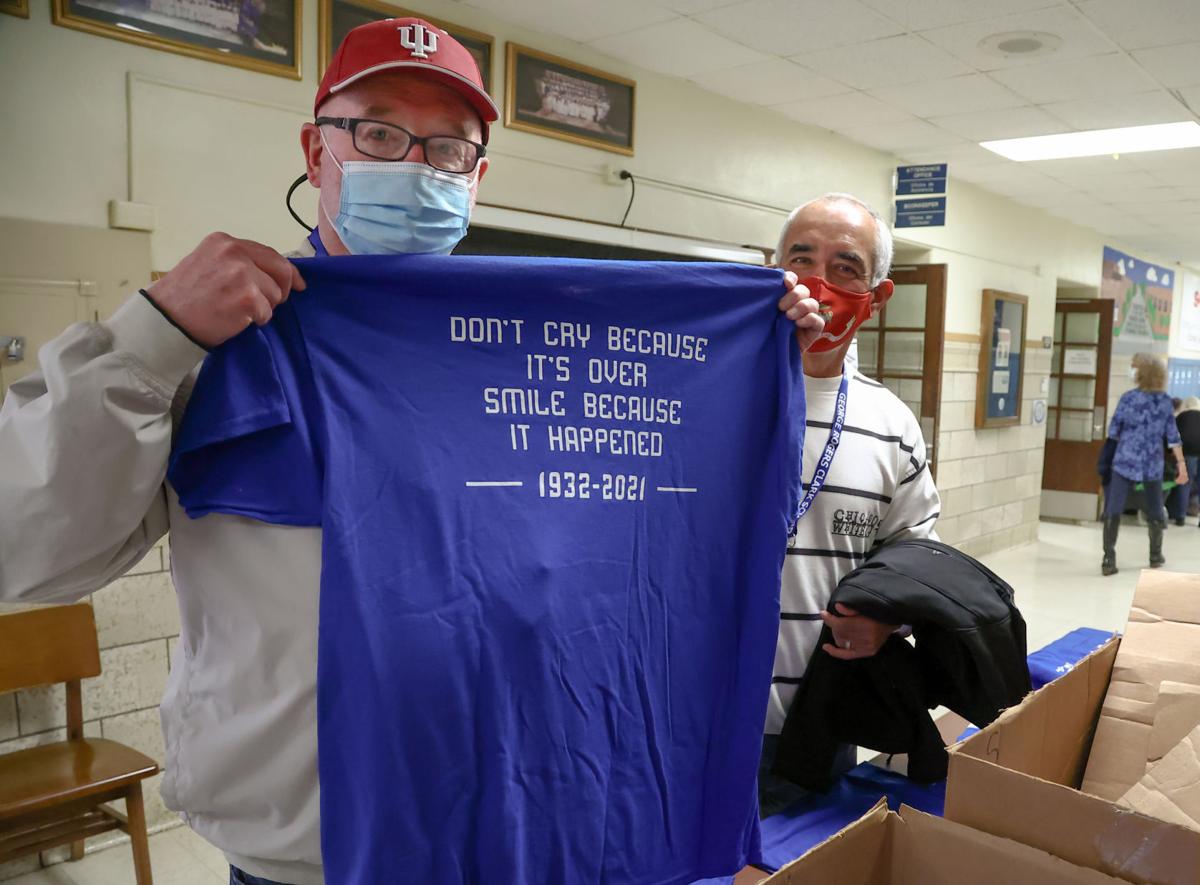 Jim Martinez ('73), of Valparaiso, looks on as his classmate Jim Holmes ('73) shows off his newly purchased T-shirt Saturday as they tour Clark Middle/High School. 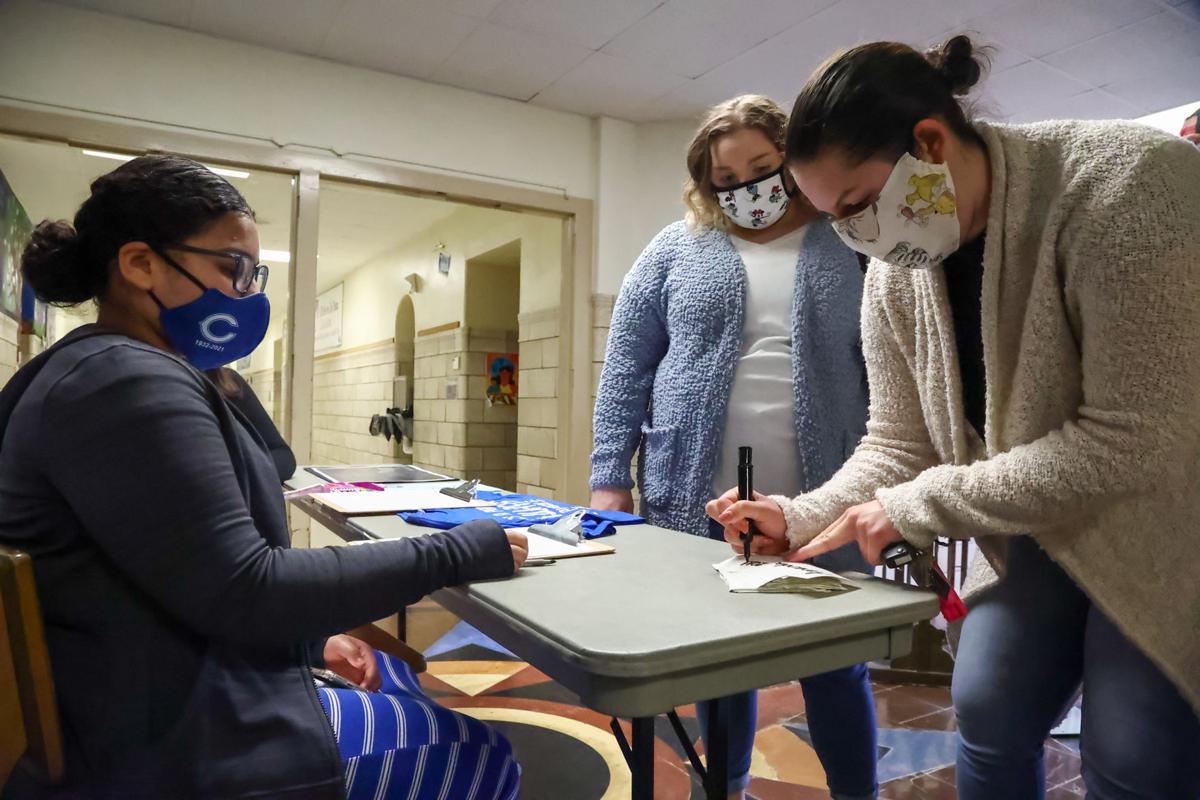 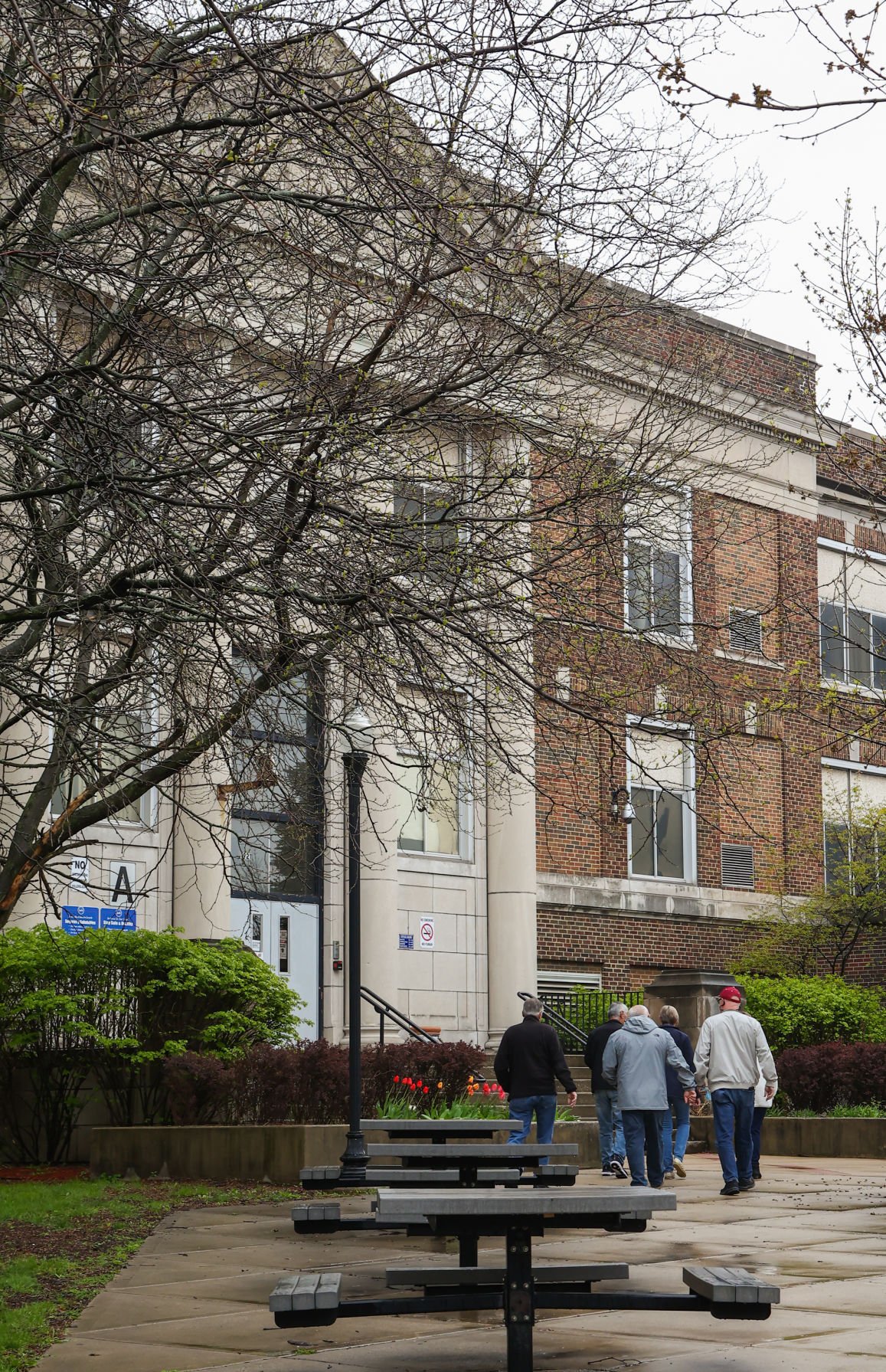 As the message on a souvenir T-shirt stated: “Don’t cry because it’s over. Smile because it happened.”

Clark, along with Gavit and Hammond high schools, is closing after this school year. Clark’s administration organized walk-through tours Saturday and May 8 and 22.

Saturday’s tours were expected to draw 130 people, with nearly 200 scheduled for May 8 and another 150 registered so far for May 22.

“Those were good, old days,” said Laszlo Hegedus, of Hammond, class of 1987. “We had great teachers back then.”

“It was a good school. Still is,” added Steven Mitchell, of Hammond, class of ’88.

Debbie Weidig, of Hammond, class of ’93, recalled going to a gas station across the street or to the lake for lunch.

Clark’s history goes back to 1932, when the Robertsdale section of Hammond became home for a high school on an empty prairie site on 119th Street between Stanton and Davis avenues. Previously, area high school students could attend Whiting High, Hammond High or Hammond Tech.

According to an anniversary booklet, George Rogers Clark came into existence on a snowy winter day in February 1932. Students, who had attended old Franklin School, carried their books as they walked six blocks to their new school.

Students chose the name George Rogers Clark in a contest with the hope that the school would exemplify the character of the American Revolution hero.

That first year saw 198 students in the high school, grades 9 and 10 only, with an elementary enrollment of 1,031. One of the few K-12 schools in the state of Indiana, Clark continued to educate those grades until 1976, when elementary students moved to the new Franklin School.

Among those finding familiar names on the Roll of Honor for Clark war veterans was Matthew Kaplan, class of ’73. His father, Seymour, a 1940s Clark grad, served in WWII, as did many of Kaplan’s uncles.

“When I look at these names, I probably knew many of their sons and daughters,” said Kaplan, a Chicagoan and three-year photographer for the Clark yearbook, Powderhorn.

Clark, Kaplan said, “means everything to me. There are pieces of my past still here after all these years. I only lived four blocks away. It’ll cause an ache when it’s gone.”

For the class of '64, alum Kathy (Dubich) Durochik, of Wheaton, Illinois, came with her husband, Gary, whose mother, Anne Plutko, graduated from Clark in 1934.

Durochik had served as school newspaper editor and secretary of the student council, “so I was very involved and have really good memories.”

Durochik attended elementary school at nearby St. John the Baptist. During a regular activity period, Clark officials allowed her to go to the Catholic parish for religious instruction, then return to the public school.

Looking at the pool that had formerly been a small gym, Kevin Danielson, class of '88, recalled his deaf brother David, '85, swimming for the Pioneers.

“Every day you wanted to come,” Kevin Danielson, a Hammond resident, said. “It was fun and teachers kept it interesting.”

Robert Peters, '87, recalled being corrected by his English teacher, Dolores McCampbell, for the lyrics to a Rolling Stones tune. The teacher, who taught Peters’ mother more than three decades earlier, reminded the boy that “I can’t get no satisfaction” should be “any satisfaction.”

Hobart resident Colette Lewandowski came with classmates from the '74 class. She was a member of the first interscholastic volleyball team at Clark. Her coach was Carol Core and the team played three games that initial season.

“It was a great experience,” Lewandowski said, “because girls that had played against each other in grade school were playing now as a team.”

Vicky Kitchell, officer manager at Clark, who has been scheduling these tours, commented, "There is a lot of interest, and I have people (saying), 'Wait a minute, I have to call you back because I have to see if my sister, girlfriend, mother, if they're available and when they can come.' So the community is extremely interested in being able to come in and walk the building.”

“This place will live on in our memories,” Peters said.

Miller Pizza Company owner mourned as a bedrock of community

Miller resident Gary Ian Goldberg died at the age of 77.

Person flees after being ejected in rollover crash, police say

Two others suffered minor injuries from the wreck.

A man called police after seeing what appeared to be human remains in a wooded area in the 2100 block of Washington Street, Cmdr. Jack Hamady said.

Actor with Region ties to compete on 'Jeopardy!'

Mike Nelson, a professional actor originally from Chesterton, will compete on the beloved quiz show Monday.

The suspect was driving one of four high-performance Dodge and Jeep cars that were stolen from a LaPorte Dodge dealership and later seen traveling over 150 mph on the interstate, an Indiana State Police said.

"It's heartbreaking," owner Loretta Nosal said. "Downtown is losing its whole retail element. It's just restaurants and bars coming in."

A sign along the north side of the exit road is nearly buried by the dune, with just the tops of the fence posts sticking out to mark the edge of the road.

As news spread of the guilty verdicts for former Minneapolis police Officer Derek Chauvin in the killing of unarmed black man George Floyd last summer, reaction poured in from around the Region.

A 21-year-old man and 22-year-old woman were identified as the crash victims.

"When asked how the vehicle ended up on the railroad, (the woman) stated she was trying to turn around," according to the incident report.

He attempted to avoid a collision, but failed and was thrown over the handlebars of his bike and onto the road before coming to rest in the grassy median, according to the crash report.

Mark A. Jaramillo, 46, of Crown Point, was in custody Wednesday on one count of murder in the homicide of Rafeal J. Marcano, 27, of Hobart.

Two alcohol-related measures approved Wednesday by the Indiana General Assembly, and a third set for approval Thursday, have the potential to reshape Region communities in Lake and Porter counties.

Police recovered a Dodge Challenger Hellcat stolen from an Illinois car dealership last month after arresting its driver Wednesday during a traffic stop on Interstate 65, an official said.

House Enrolled Act 1405 prohibits the state or a local government in Indiana from issuing any kind of immunization passport, or requiring one for any purpose.

The woman told police she was dropping her child off before she went to work early that morning when her vehicle was taken.

"To stab a human being 35 times is unimaginable," the victim's sister said. "It's more than anyone should have to endure."

The vehicle was searched with the assistance of an Indiana State Police police K-9, who alerted officers to the presence of drugs in the car.

Police have issued several warnings and citations to East Chicago landlords in violation of the ordinance.

Police were still searching Thursday afternoon for a passenger who allegedly shot the gun at officers, striking a Lake County squad car, according to the Lake County Sheriff's Department.

Police said they found the accused, Kenneth Ratliff, "asleep under the covers of the bed in the main room of the apartment" in the 200 block of Brown Street.

During its regular meeting Tuesday, the Hammond school board adopted a resolution to swap athletic fields at George Rogers Clark Middle/High School for park land behind the Hammond Civic Center.

The storied halls of Hammond High School were brought to life once more as hundreds gathered Saturday to bid the historic building farewell.

Clark Middle/High School alumna Dayanara Villarreal ('96), of East Chicago, poses next to a mural that she collaborated on that's by the entrance to her French class.

Jim Martinez ('73), of Valparaiso, looks on as his classmate Jim Holmes ('73) shows off his newly purchased T-shirt Saturday as they tour Clark Middle/High School.