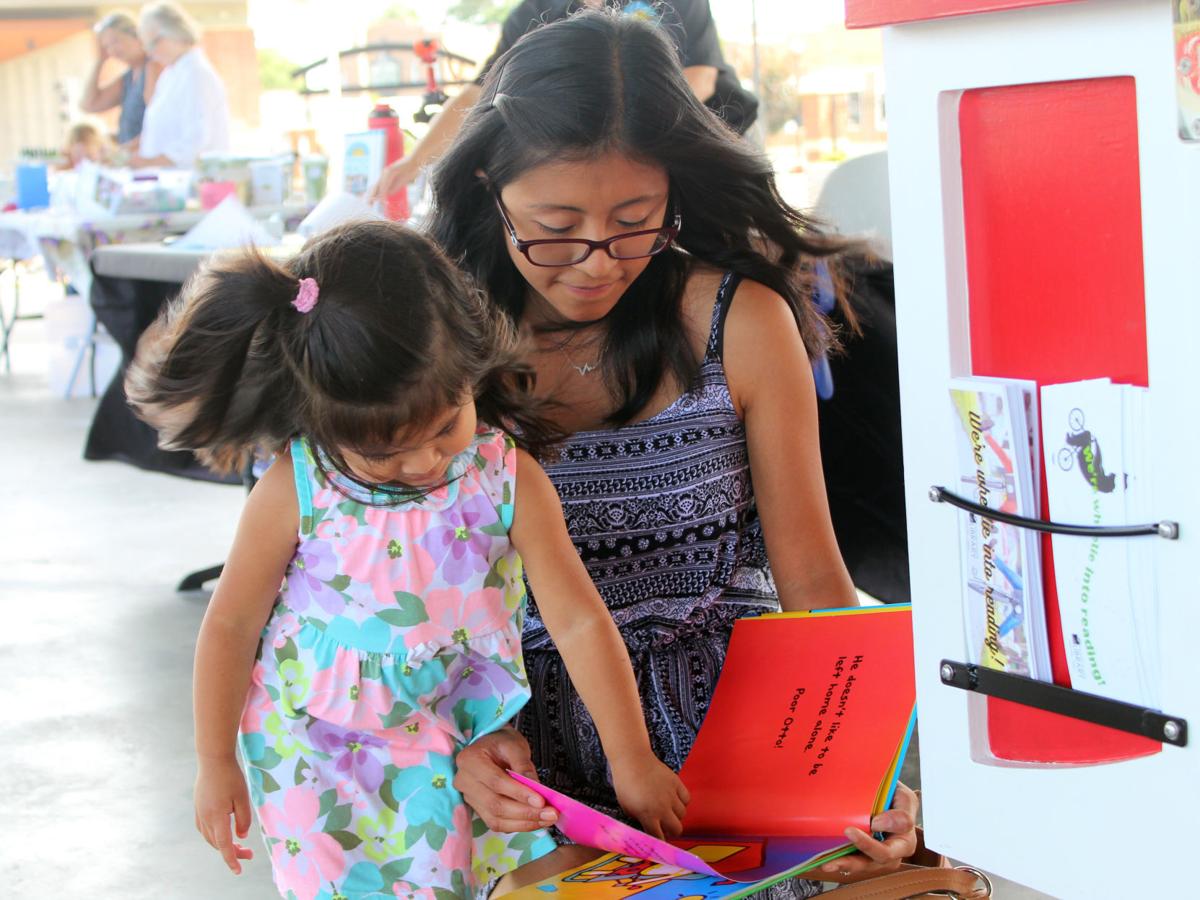 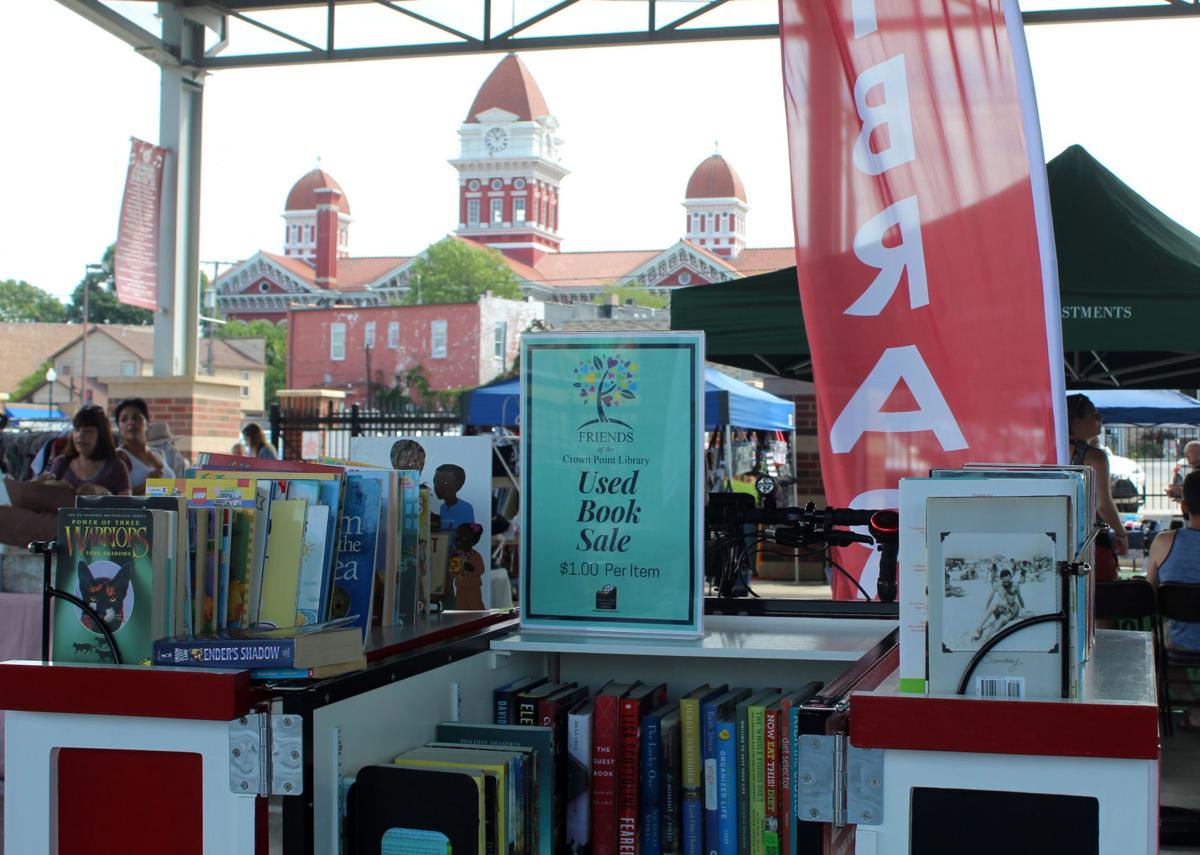 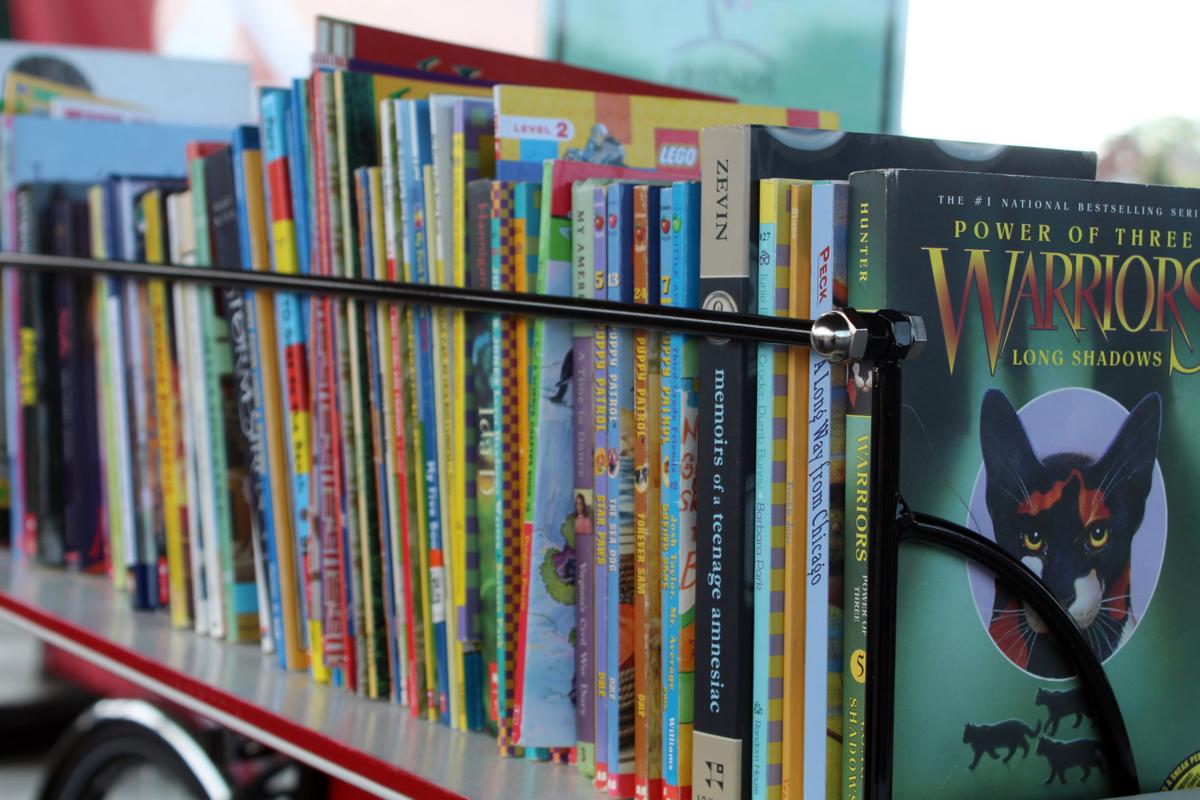 Various titles can be found on the Crown Point Community Library's new book bike, which is used for outreach programs in the community. The bike has been used to sell books through the Friends of the Crown Point Library sale, as well as on-the-go programming.

Instead, you'll find the Crown Point Community Library has taken outreach on the road through a book bike, which offers books for sale through the Friends of the Crown Point Library and on-the-go programming.

While the book bike first appeared at the Crown Point Farmers Market in June, the library launched a naming contest for the bike last week.

Name suggestions are due online, or at the library, by Monday, and the winner will be announced Oct. 4. The naming contest coincides with Library Card Sign-Up month, which is this month.

"We had a lot of positive shout outs at the parade," Wendorf said. "It was really exciting to be a part of that community event, and have something fresh and new to show them."

A $4,390 grant from the Crown Point Community Foundation paid for most of the bicycle, which cost $5,390 and is outfitted with electrical assist, Wendorf said.

Wendorf said the library was thrilled to partner with the foundation to bring the unique and engaging outreach tool to the Hub of Lake County.

Arnold's Mobile Bike Repair assembled and serviced the library's new cycle at no cost, and graphics on the bike were done by NWI Print Pro, Wendorf said.

The nature of downtown Crown Point lends itself to the library to have an outreach bike, Wendorf said.

"We participate in a lot of activities on the square, and this is something that we can take out that's a little bit more mobile than the van," Wendorf said. "We can take it to our parks. We can take it to the fairgrounds, to Bulldog Park (and) do pop-up events."

Equipped with a red cargo box featuring the library's logo, the book bike makes the Crown Point Library more accessible, whether it be taking the book sale on the road, hosting a pop-up storytime or offering to-go crafts, Wendorf said.

Dozens of books can fit into the bicycle's cargo box, which also has space for bookmarks. Books can be checked out, and library cards can be issued from the bike, Wendorf said.

"It's really about bringing access to library services outside the building to people that might not be aware of the things that the library is doing," she said.

The book bike will return to the Crown Point Farmers Market from 8 a.m. to 1 p.m. Saturday at Bulldog Park, 183 S. West St.

Great books for kids to read

Times Correspondent Christine Bryant compiles a list of books for kids to read during every season.

As the season of giving is officially under way, families in the Region are looking for ways to give back to their community.

As cooler temperatures move into the region, the excitement for Halloween and fall activities builds for many families.

One of the easiest ways to teach kids about philanthropy is through story.

Many kids know that sinking feeling in the pit of their stomachs as they think about returning to school.

Whether it’s swimming in your backyard pool, enjoying a day at the beach or camping under the stars at night, there are many opportunities for…

With the final days of the school year approaching, families are beginning to plan fun activities for the summer.

How does your garden grow? Fresh crop of kids books to inspire the whole family

Spring is finally here, and it’s only a matter of time before seedlings begin to emerge in the garden.

The arrival of March signals spring is just around the corner.

In the coldest days of winter, it’s easy for a family to experience a little cabin fever.

Winter is the perfect time to curl up with a good book and enjoy the frosty air from the comfort of inside.

Holidays by the book: Lots of good reading options for the whole family

As snowflakes fall outside, there’s no better place to be than sitting by a fire with a cup of hot chocolate and a good book in hand.

Books to teach kids about kindness, giving back

Kindness starts in the home, and one of the easiest ways to start teaching kids how to give back is through the story.

A grave marker for Blanche Eberhardt (nee Mandernach) has found its final resting place after being uprooted about two years ago from the front yard of a Crown Point home.

No action was taken to approve the city moving ahead with the project, however, the Crown Point City Council utility committee has asked Commonwealth to proceed with schematic design work.

3 NWI sisters, 11 years apart, share motherhood journey after giving birth within weeks of one another

The three sisters, who are 11 years apart, found out they were all pregnant last summer, with weeks between their due dates.

Jon Gilmore, president and CEO of Tonn and Blank Construction, said steel began going up for the project last week, and motorists will be able to see the landmark hospital from I-65 "here soon."

Jeff Good, president of Good Hospitality Services and managing partner of the hotel's ownership group, said driving by the site 20 years ago, "you never thought," a hotel would be there.

Various titles can be found on the Crown Point Community Library's new book bike, which is used for outreach programs in the community. The bike has been used to sell books through the Friends of the Crown Point Library sale, as well as on-the-go programming.