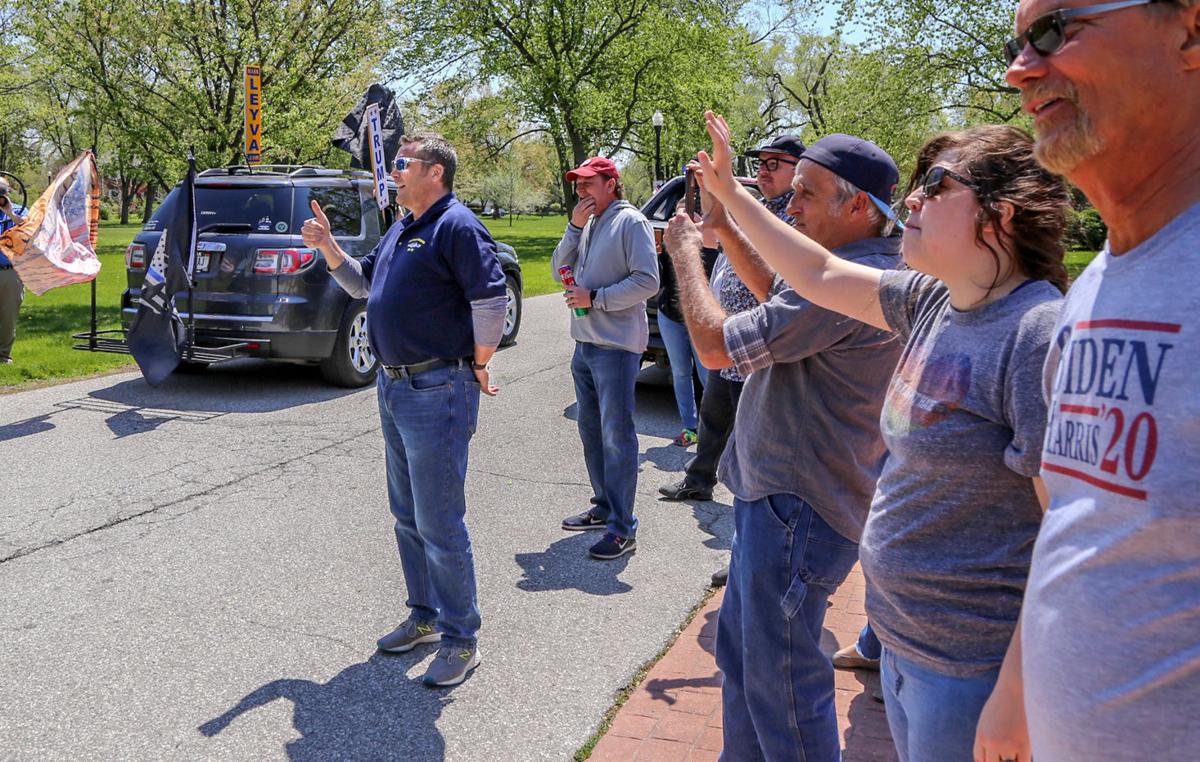 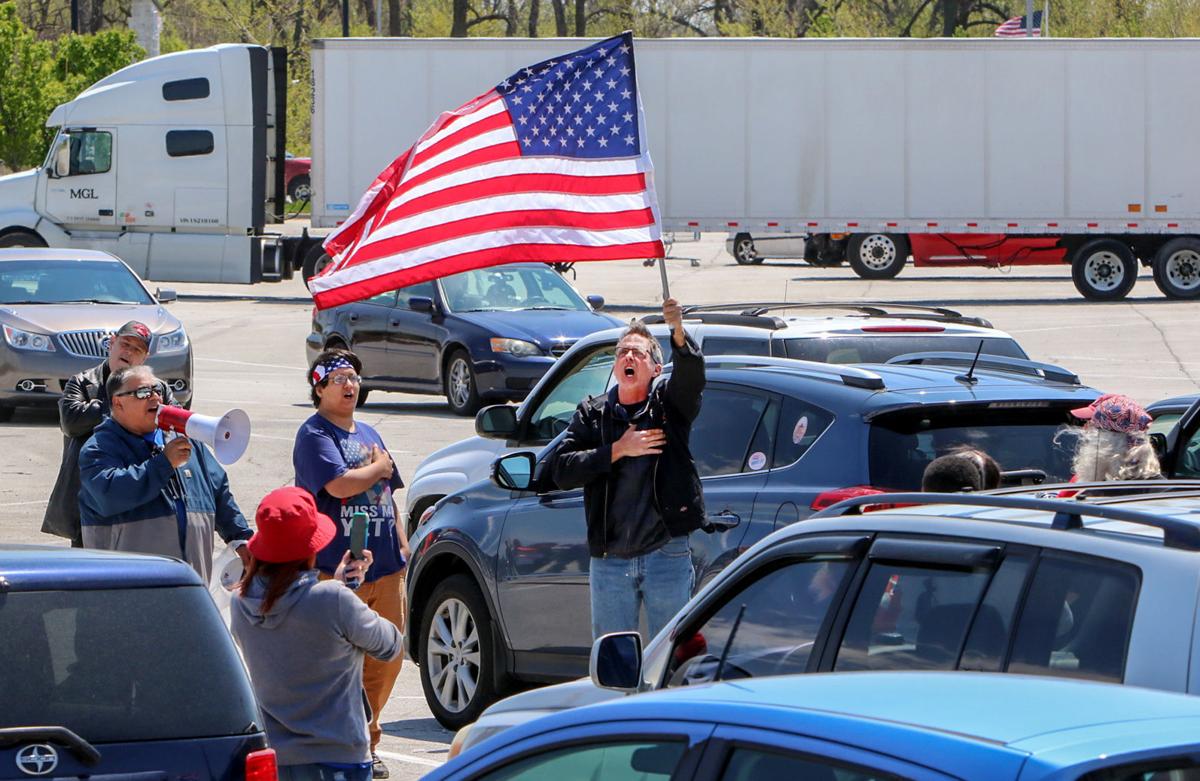 Trump supporters recite the Pledge of Allegiance as they prepare to leave the Walmart parking lot in Hammond for a protest parade past the home of Mayor Thomas McDermott Jr. 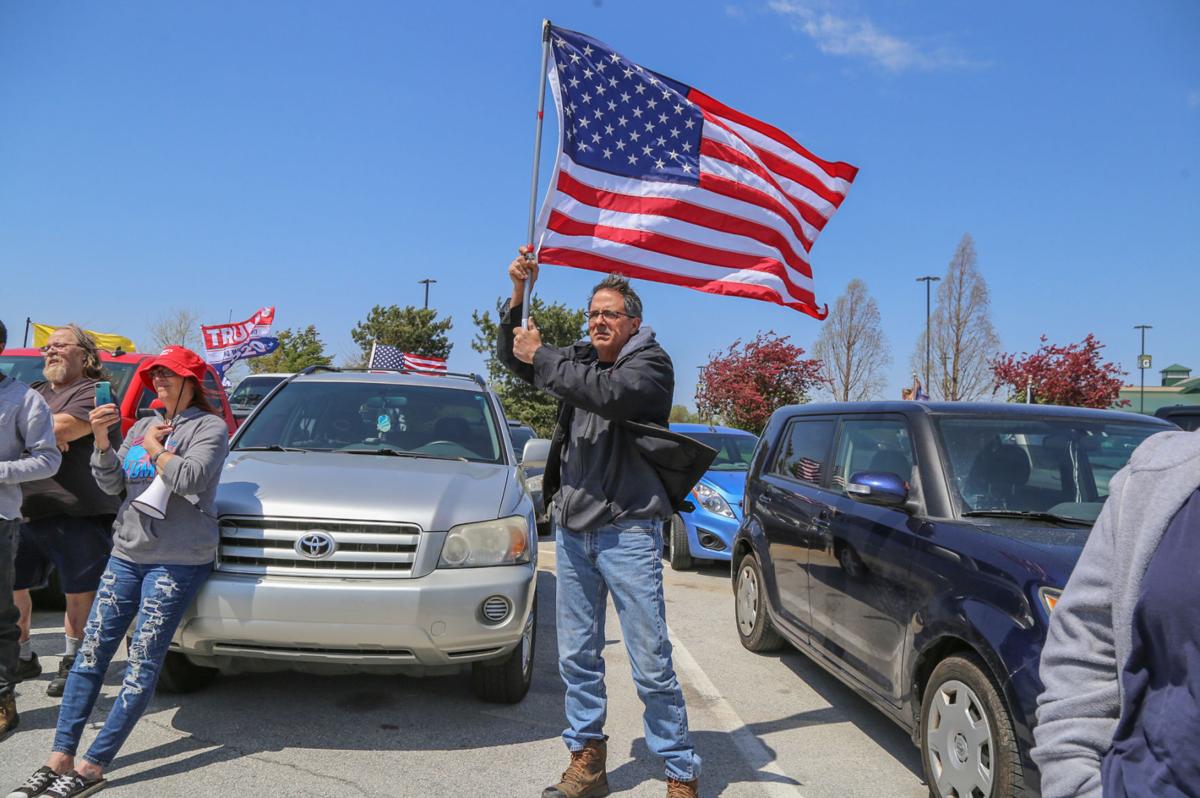 Trump supporter gather Saturday in the parking lot of Walmart as part of an organized protest against Hammond Mayor Thomas McDermott Jr.

HAMMOND — A caravan of Trump supporters traveled hours from Evansville to Hammond to drive by Mayor Thomas McDermott Jr.’s house Saturday afternoon in response to a spat over a flag being flown outside a resident's home.

The group, Young Conservatives of Southern Indiana, had made the trip from southern Indiana to the mayor’s home in response to McDermott’s condemnation of an anti-Joe Biden flag containing an expletive.

The flag, which was placed on a residence that sits across from a park, violated a Hammond ordinance banning public display of "obscene" material because it contains two uses of the F-word, McDermott argued.

Locals joined in on Saturday's protest, such as Dee Trojak, of Hebron, who had heard about the event from a social media app and said she was angry at the situation with the flag.

“I was appalled,” Trojak said. “For all the good the mayor supposedly did, why is he against Trump?”

McDermott had threatened to send code enforcement officers to go after the resident, Roy Steffan, for any potential violations. The mayor has since met with and apologized to Steffan, and noted he has not been cited by code enforcement for anything.

Steffan said he had no connection to the protest that occurred Saturday, the Young Conservatives of Southern Indiana group that organized it, and no one from the group contacted him about attending or participating.

The caravan gathered at the Walmart parking lot on Cabela Drive and the vehicles, embellished with Trump flags, headed to McDermott’s Hammond home, where a group had gathered to show support for the mayor.

McDermott said he estimates there were about 50 people who had gathered. He said they waved and welcomed the group into Hammond, and the caravan drove by without incident. There were no issues or confrontations between either of the groups.

“It was like having a parade coming right to my neighborhood,” McDermott said. “It was bigger than I thought, more cars, but everyone was nice and my supporters who were in my driveway were really nice.”

Before the caravan left the Walmart parking lot, members with bullhorns addressed the group, expressing that their First Amendment rights were under attack. Members advised the group that they should remain peaceful and warned against the potential of “leftist mobs” in the city.

The group that was waiting at McDermott’s home included his friends, family and Region residents who wanted to gather as an antithesis to the Trump caravan. John Cantrell, who lives in the neighborhood, said he doesn’t understand what the group’s purpose for driving by was.

“I think it’s crazy to drive five hours here and five hours back for this,” Cantrell said. “There are just so many better things to do with your time then spend 10 hours on that.”

North Township Trustee Adrian Santos was among those at McDermott’s house.

“We welcomed them into the city and waved hello,” Santos said.

Santos said that he sees the issue regarding the Hammond resident’s Biden flag as being one of abiding by local ordinances rather than one of free speech. He said that he believes those in the Trump caravan would take issue if a sign or flag was put in their community by a church or park that had expletives or vulgarity on it.

“I respect the fact that if that is what they want to do, they can do it; but I think it’s all uncalled for,” said Santos. “I think they are not seeing how the words on the flag has an effect on kids, who play at the park across the street. There’s an ordinance against the displaying of obscene or vulgar material. If they are supposedly law-abiding citizens supporting Donald Trump, they think the rules don’t apply to them. We have the right to care about what kids see in our community.”

An Evansville-based group of Donald Trump supporters say they’re planning to drive more than five hours to Hammond Saturday to protest outside city hall and the home of Mayor Thomas McDermott Jr.

Trump supporters recite the Pledge of Allegiance as they prepare to leave the Walmart parking lot in Hammond for a protest parade past the home of Mayor Thomas McDermott Jr.

Trump supporter gather Saturday in the parking lot of Walmart as part of an organized protest against Hammond Mayor Thomas McDermott Jr.