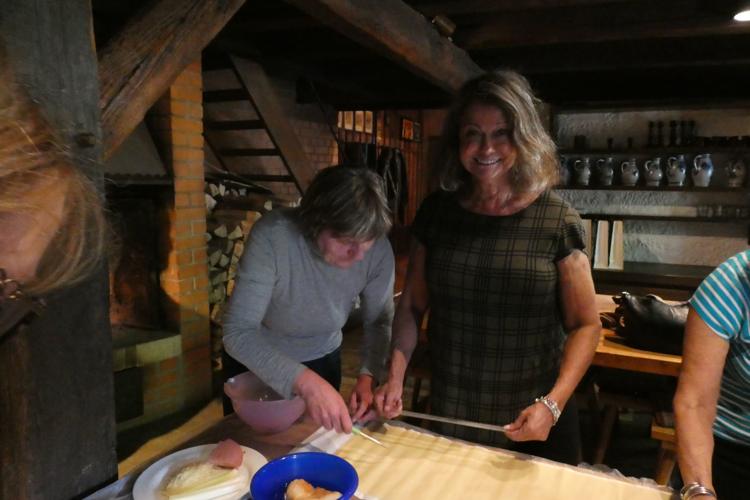 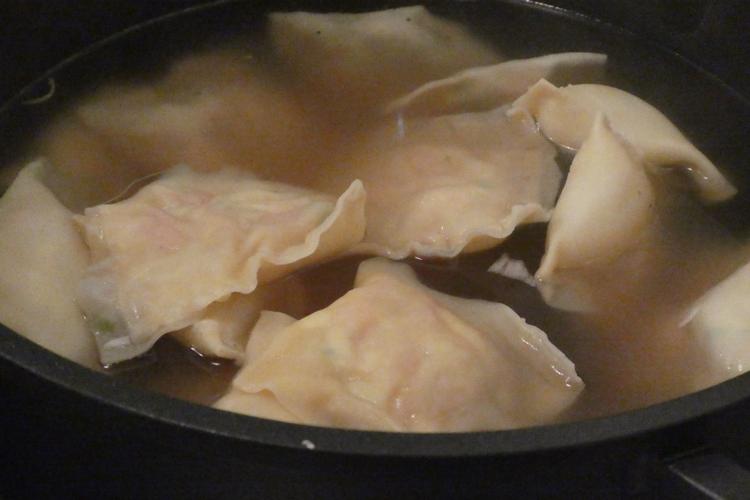 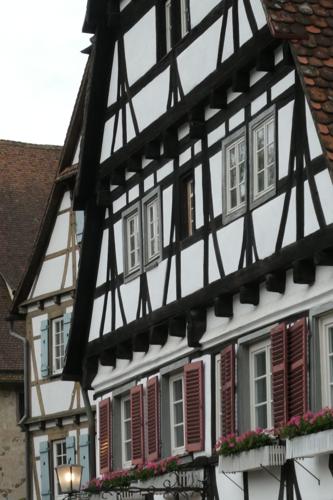 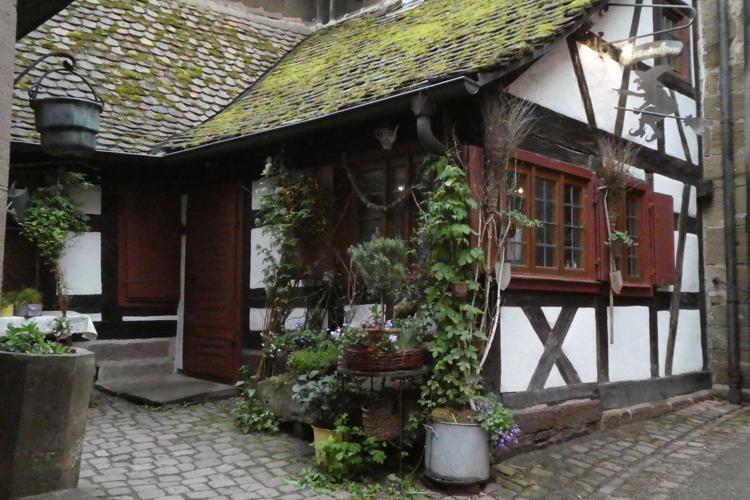 Imagine a room where flickering flames highlight low beamed ceilings blackened with centuries of smoke and glass windows wavy from almost a millennium of time give views onto a cobblestone courtyard bordered by half-timbered buildings. I am at Maulbronn Monastery learning to make maultaschen, a centuries old dish that originated here. If I succeed, I’ll earn a coveted but very little known diploma in maultaschen making.

Built in 1147 and now a UNESCO World Heritage Site, the monastery was founded by Cistercians, a religious order of the Benedictines retreating from the world to establish a simpler life and find a balance between manual labor and prayers. Located in the village of Maulbronn in the Black Forest region of southwestern Germany, the monastery was a self-sufficient, fortified city within the boundaries of what was once the Duchy of Swabia. It’s all very charmingly Germanic, a storybook type place that has survived tumultuous times. Now Maulbronn Monastery, the best preserved medieval monastic complex north of the Alps, functions as a Protestant primary boarding school for both boys and girls. It’s most famous pupil is probably the author Hermann Hesse whose book Beneath the Wheel tells the story of a boy sent to a seminary in the village of Maulbronn.

The gates, once locking out the world, are open to visitors, the Romanesque cathedral offers services and tours and historic buildings house a restaurant, visitor center and shops. Frequent events include concerts, fairs, a farmer’s markets during warm weather and those famous Christmas markets they have in Germany. Besides that, this being Germany after all, there’s also Maulbronner Klosterbräu, a beer brewed according to an ancient recipe. Back then water wasn’t safe, so drinking beer, ale and wine started in the a.m. and continued on to night. Which may be one reason why the monks, who were given little food and often prayed for 16 hours straight in the Cathedral were able to do so.

Back in the day, all was lit by fire and in twilight I can almost sense the friendly ghosts of years past. This feel of what life was like a millennium or more ago includes making maultaschen, sometimes described as a German ravioli but so much more than that. Also, as an aside, if you think maultaschen is hard to pronounce, consider that in Swabian the term is Herrgotts-Bescheißerle, meaning “small God-cheaters.”

"It’s a dish created when two poor brothers were sent to the monastery because their father couldn’t afford to feed them," our monastery guide, Barbara Gittinger, tells us as we roll out thin sheets of a shiny dough into perfect squares.

Note to those who don’t want to totally follow the ancient recipe: If you’re in Southwest Germany you can buy maultaschen dough at many of the markets; in the U.S., substitute egg roll wrappers instead.

Seems one of the brothers took a delivery of meat during Lent. Not wanting it to go to waste, he chopped up the meat with vegetables and wrapped the mixture in dough. The idea was that God wouldn’t see the meat because of all the veggies and dough. Since that was centuries ago and they’ve been eating maultaschen ever since the subterfuge obviously worked.

But there are other stories about the dish’s origins as well including the one about the scandalous Countess of Tyrol who earned the nickname Maultasch, meaning vicious woman because of her political machinations and marriage to one man before divorcing her current husband. But you know, these things happen. Anyway, said to be amazingly beautiful, the Countess was also a culinary traveler and she supposedly brought the maultaschen recipe to Maulbronn from Tyrol in the Austrian Alps.

As I listen to the origins of maultaschen, I’m busy mincing Black Forest ham, one of several "forbidden" meats typically used to make the filling, mixing it with leeks, onions and dried bread soaked in water and then squeezed dry. Gittinger says that her family makes theirs with a type of beef mixture that sounds a lot like suet, blood sausage and vegetables such as spinach. Of course, maultaschen has gone modern and Gittinger says some substitute salmon for the meat.

I drop a tablespoonful of the mixture on the square of dough, fold it and pinch the seams tightly together "so it doesn’t open up when cooking," Gittinger tells me.

Originally, maultaschen would have simmered in a kettle of broth hanging over the open fire. Now, we use a gas stovetop hidden from sight.

Tasting maultaschen and schwäbischer kartoffelsalat (German potato salad) along with a glass of a dry red German wine,  I reflect that the flavors must be different. The wheat milled for the flour to make the dough would be different from the wheat varieties we grow today. The same with the vegetables. But that’s not the case with the Black Forest ham, a variety of dry-cured smoked ham produced in this region since at least Renaissance times. Making and eating maultaschen at Maulbronn Monastery is a historic connection between past and present.

Oh, and I received my diploma. I’m officially a maultaschen maker now.

½ pound Black Forest Ham, American ham or bacon (or a combination of all—you can also use hamburger meat), cooked and chopped

2 ounces day-old bread or rolls, soaked in water and then torn into small pieces

1 leek including the green stalk, chopped

For the dough: Mix flour with 1/2 teaspoon salt, 2 eggs, oil and just enough of the 3 tablespoons water to make a smooth dough.

Knead for 5 to 10 minutes, until satiny. Form dough into a ball, oil surface, wrap in plastic and let rest for at least 1 hour.

For the Filling: Cook bacon and remove from pan. Sauté onions, garlic and leeks in bacon drippings, butter or a little vegetable oil until translucent.

For the Dumplings: Roll out half of the dough to 1/8-inch thickness or thinner. You should have a sheet about 12 inches by 18 inches. (You also can use a noodle roller to make flat sheets with 1/5 of dough at a time.)

Score the dough with a knife, one time through lengthwise and five perpendicular cuts to make 1 dozen rectangles.

Place 1 tablespoon dough on each rectangle.

Fold rectangle over and pinch sides to close.

Repeat with the other half of dough.

Bring broth to a simmer and place 1/3 of the maultaschen in the broth. Cook for 15 to 20 minutes.

Remove and drain. Keep warm if not serving immediately. Repeat with the rest of the maultaschen.

Serve in a bowl with some broth. Serve with Schwäbischer Kartoffelsalat (recipe below).

Add onions, beef broth, vinegar, salt, pepper, sugar, and mustard in a medium saucepan and bring to a boil. As soon as it boils, remove from heat and pour the mixture over the potatoes. Cover the bowl of potatoes and let sit for at least one hour.

After at least one hour, gently stir in the vegetable oil and season with salt and pepper to taste. If too much liquid remains, use a slotted spoon to serve. Serve garnished with fresh chopped chives. Serve warm.

Jane Ammeson can be contacted via email at janeammeson@gmail.com.

FYI: For more information about the Senior PGA Championship, or to buy tickets, go to pga.com/events/seniorpgachampionship/2018 or call 269-487-3200.

Will Travel for Food: Spargel: A Vegetable Fit for a King

Will Travel for Food: Carla Hall 2018

“I would love to walk into a room seeing everyone with big curly hair or different hairstyles, funky glasses and mixed prints,” Carla Hall tol…

Will Travel for Food: Beaumont Inn

When I arrive in the new bourbon tasting room at the historic Beaumont Inn, there are already set-ups of four bottles of bourbon with empty gl…

My first stop in Kentucky last week was at Claudia Sanders Dinner House in Shelbyville, Kentucky. It's a large Southern colonial style buildin…

Will Travel for Food: A trip to Fraunces Tavern

Will Travel for Food: Cookbooks for holiday giving

Will Travel for Food: Faerie Handbook

To me, fairies have always been about the holiday season — think the Sugar Plum Fairy from the Nutcracker Suite ballet and Tinkerbell, the blo…

Last year I interviewed Addie Gundry, who was the 2015 winner on Cutthroat Kitchen on the Food Network, about the two cookbooks she had just r…

Will Travel for Food: Ben Watkins

This December I received a notice on my Google calendar that Leila Edwards’ birthday was coming up. It was a painful reminder because Leila, w…

Will Travel for Food: Carol Peachee

“Bourbon is a legacy of blue grass, water and Kentucky limestone,” Carol Peachee tells me when I ask what makes Kentucky bourbon so prized.

The Philippines, top provider of nurses, face a shortage at home

The Philippines, top provider of nurses, face a shortage at home

An ‘Independent’ party could dominate American politics, according to study

An ‘Independent’ party could dominate American politics, according to study