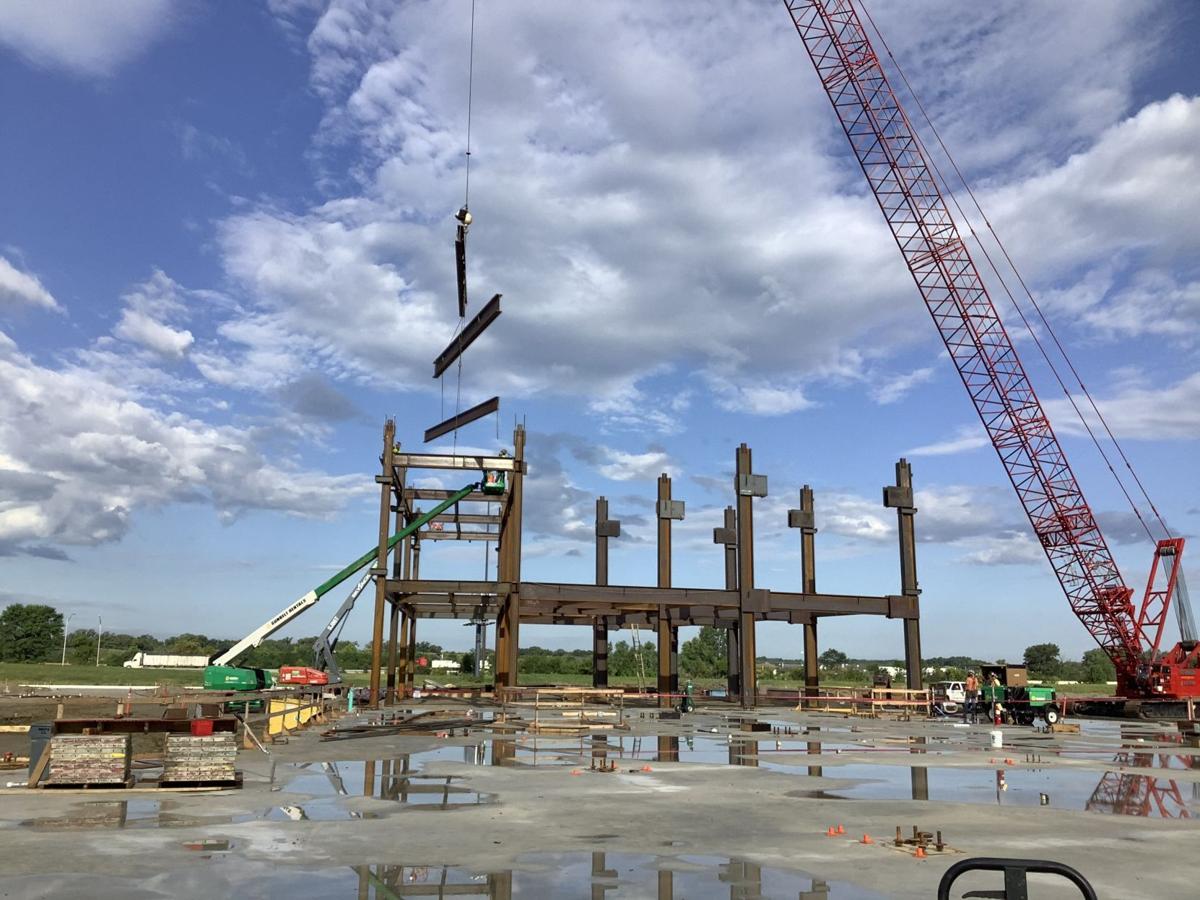 A crane moves steel as crew work to build a new Franciscan Health hospital in Crown Point on the southeast corner of Interstate 65 and U.S. 231. 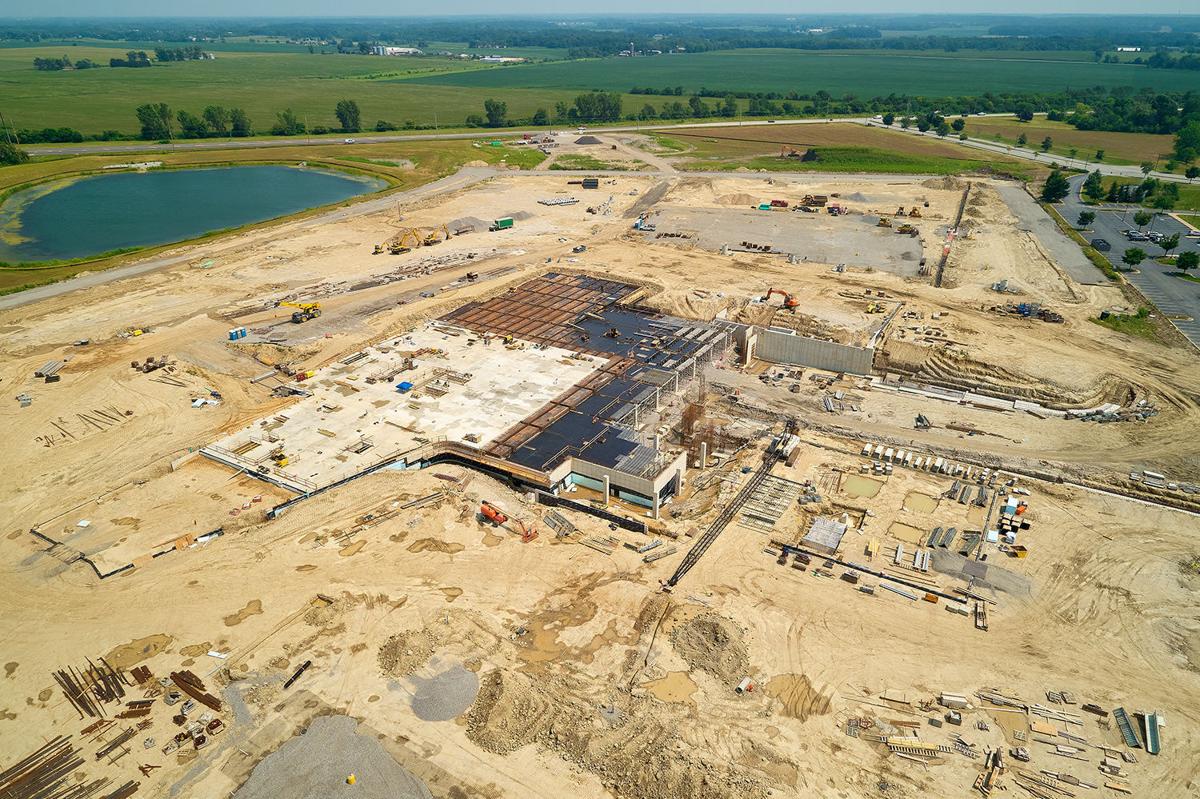 Work on a new Franciscan Health hospital in Crown Point is progressing. 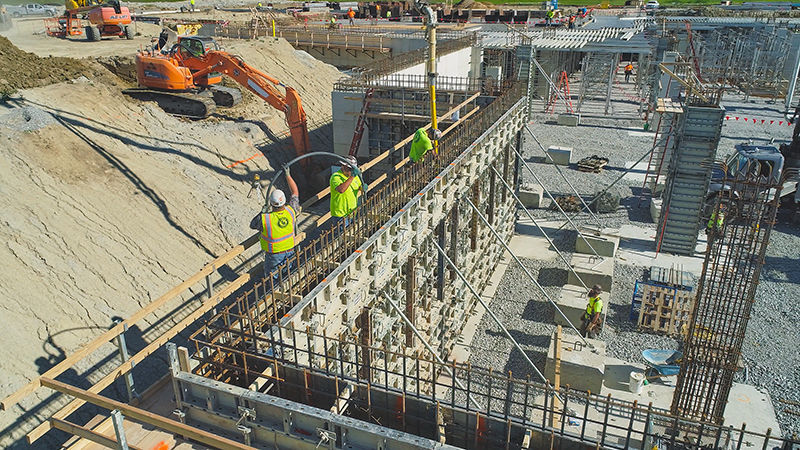 A construction crew works on the new Franciscan Health hospital in Crown Point. 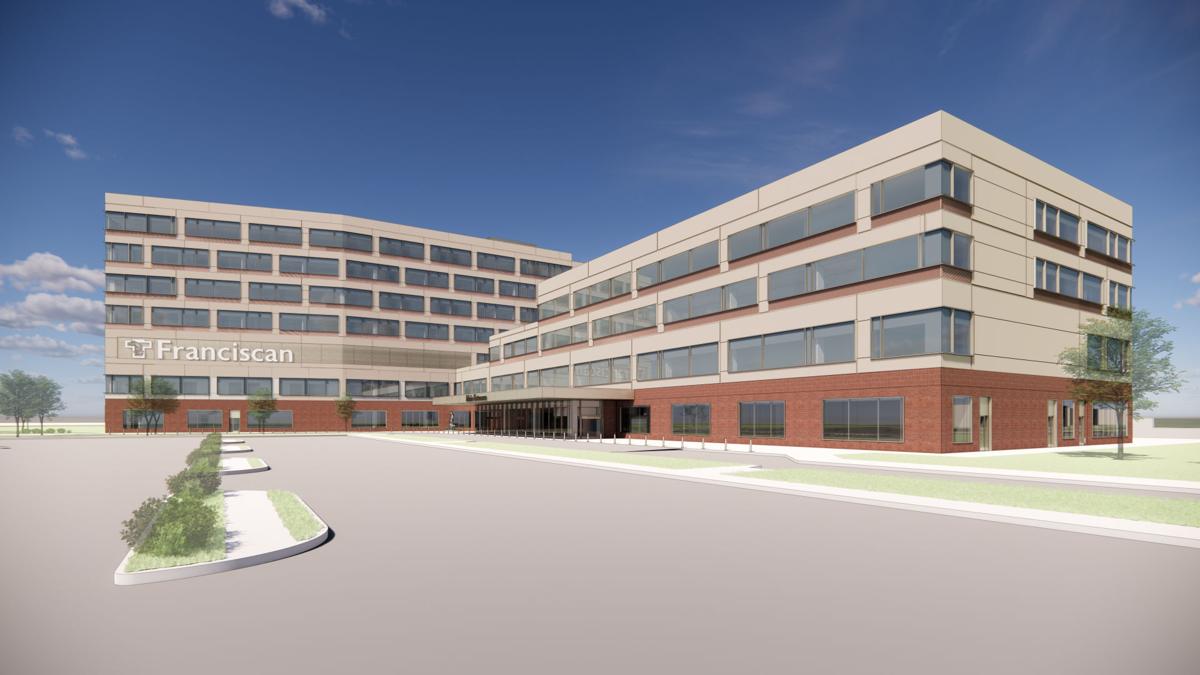 A rendering shows the future entry of a new Franciscan Health hospital in Crown Point.

CROWN POINT — Work is moving along on a new, state-of-the-art Franciscan Health hospital in Crown Point that officials broke ground on nearly a year ago.

Located on the southeast corner of Interstate 65 and U.S. 231, the full-service hospital is slated to open in fall 2023 and will serve south Lake County, as well as Porter, Newton and Jasper counties.

And crews have been busy at the site to construct the hospital, which officials have said marks a "new age of health care in Northwest Indiana."

Jon Gilmore, president and CEO of Tonn and Blank Construction, the construction firm on the project, said there are currently around 130 people on the site, working on the new hospital.

At the height of construction, Gilmore anticipates anywhere from 400 to 500 people working at the site.

"The basement is mostly poured. We're pouring the first floor structural slab now for the hospital portion," Gilmore told The Times. "When that's completed, we'll move on to the medical office building portion, which is connected to the hospital."

While the basement is being installed, Gilmore said all of the patient bathrooms are being built in the construction company's shop in Westville.

"Those will all be prefabricated, completely finished with the towel bars on, and quite frankly, the paper towels will be in the paper towel holder when it hits the site," he said.

Gilmore said steel began going up for the project last week, and motorists will be able to see the landmark hospital from I-65 "here soon."

Site work for the project, including installing utilities and a ring road, "is pretty much in," Gilmore said, noting the roads won't be paved until later on due to heavy construction traffic.

"We don't want to damage the roads before we put them into use," he said.

The hospital is currently in the "core and shell" phase of construction, Gilmore said, noting in about a year, the building will be completely erected.

"The inside work will begin before that, but then that's where it takes us to towards the end of 2023 to finish the project," Gilmore said.

All told, the project is set to cost $333 million, which includes about $250 million in construction costs alone, Gilmore said.

Originally, the hospital was set to cost $200 million, according to a previous Times report.

"What has changed is we added an additional floor, which the building was designed for future vertical expansion, but Franciscan chose to do that now," Gilmore said. "So we added a seventh floor on the hospital, and a fourth floor on the MOB (medical office building). That will just be shell space for future build-out, for more patient rooms or more offices or whatever's needed."

Once complete, Gilmore said patients wouldn't know the difference between the hospital and the medical office building, as the two will be connected.

The new hospital is just one project planned for the area.

Nearly two years ago, Franciscan announced plans to transform the southeast corner of I-65 and U.S. 231 to include the new hospital, an expanded University of Saint Francis, commercial/retail and residential projects and potentially the new home of Andrean High School.

The University of Saint Francis Crown Point cut the ribbon on its $7 million expansion Monday. The project also was completed by Tonn and Blank.

The entire development, which could total $400 million to $500 million, is about 540 acres, with about 250 acres reserved for residential development, 80 acres for commercial projects and 60 acres has been set aside for the possible Andrean move.

For now, the hospital is the primary focus of development in the area.

"There's quite a bit more acreage there that will be developed, but there hasn't been anything specifically slated for the other areas as of yet," Gilmore said.

When it comes to the existing Franciscan Health hospital at 1201 S. Main St., Gilmore said the facility "will be reduced appropriately."

"There'll be some demolition on that site, but we're still going to have a presence there," he said.

"We just don't know exactly what the program is, and that's what we're working on now. ... It's not going to have hundreds of patient rooms anymore because those patient rooms are moving to the new hospital, but we'll still have a significant presence on that site."

Before classes began Monday morning, university officials, community leaders and students gathered to celebrate and bless a $7 million expansion to the school.

During a virtual meeting Monday, the Crown Point Plan Commission got a look at the new hospital, which has been modeled after the $243 million Franciscan Health hospital in Michigan City that opened in 2019.

The $200 million, state-of-the-art, full-service hospital on the southeast corner of Interstate 65 and U.S. 231 will be a multi-level building, reaching more than 100 feet.

On Thursday afternoon, officials gathered to bless and break ground on a new Franciscan Heath hospital in Crown Point at the southeast corner of I-65 and U.S. 231.

Site work for a new $200 million hospital coming to the city is slated to begin in mid-September.

A crane moves steel as crew work to build a new Franciscan Health hospital in Crown Point on the southeast corner of Interstate 65 and U.S. 231.

Work on a new Franciscan Health hospital in Crown Point is progressing.

A construction crew works on the new Franciscan Health hospital in Crown Point.

A rendering shows the future entry of a new Franciscan Health hospital in Crown Point.