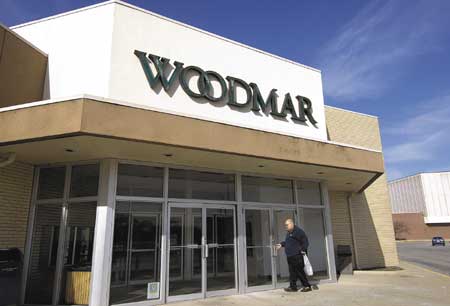 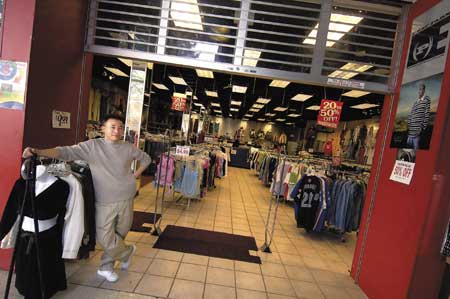 THE TIMES A lone shopper walks into the Woodmar Mall in Hammond on Tuesday. The mall's remaining days appear numbered, as developers plan to tear down the mall in stages and build new stores.
ANDREA HOLECEK

Woodmar Mall, a Hammond institution since 1954, is about to be visited by the wrecking ball, and at least one of the five stores remaining on its concourse has been told to vacate by next week.

The mall at 6508 Indianapolis Blvd., owned by Praedium Development Corp., will be torn down in stages and new stores built, Mayor Thomas McDermott Jr. said Tuesday. A new Carson Pirie Scott store is expected to anchor the redeveloped property.

"The initial plan was to begin demolishing the south part of the mall," McDermott said. "After that, they'll pour a pad and build the new Carson's, transfer the contents to the new store, open the new Carson's, and then demolish the old store.

"We'll have the renderings and announcement very soon."

The mayor said he and George Markopoulos, managing principal of Northbrook-based Praedium Development Corp., have a confidentiality agreement that prohibits him from releasing any further details of the project.

"I know he's interested in getting started," McDermott said. "It's a big development for him and for us. We're happy to have a developer like George Markopoulos. ... But I can't talk about what the city's commitment is, who will be in the new mall, or what it will look like."

The mayor said he understands that the redeveloped shopping center will be similar to Town Square Shopping Center, Praedium's development at the intersection of Main Street and Indianapolis Boulevard in Schererville.

In Hwa Chung, owner of the Edge Activewear store in Woodmar, received a letter from Markopoulos dated Monday informing him his lease had been terminated as of Feb. 1, and asking him to vacate his store by Feb. 17.

Chung, who operated stores in Woodmar for 14 years, said Markopoulos has asked him if he planned to reopen there once the new mall is built.

Chung will move whatever merchandise that's not sold in the next week to his store in Westfield Southlake. He said there have been rumors about the demolition of the mall for months, even years, but now it appears to be happening.

Chung and employees at the other four stores still open along the mall's concourse said they've repeatedly, though never officially, heard plans call for everything in the mall except the Carson Pirie Scott store to be demolished, possibly before April.

Carson's, which has been the mall's anchor tenant since 1954, leases a tad less than half of the mall's 230,000 square feet. Its lease runs through 2007 with an option for three additional five-year extensions. Calls for comment to its corporate spokesman were not returned.

Although McDermott wouldn't provide any information on Hammond's role in Woodmar's renewal, in August 2005, Peter Novak, the city's executive director of planning and development, said a company was in negotiations with the city on some type of unspecified tax abatements, tax relief or other incentives for the enclosed mall.

In February 2005, the city's Redevelopment Commission approved a plan to develop the entire 120 acres around the mall into a unified commercial and retail shopping center. According to that redevelopment plan, Hammond was to provide nearly $8 million for sewer, water and utility upgrades in the area, as well as widen and improve 165th and 167th streets to leverage $30 million in private investment at the site.

Arctic ice is receding 'more quickly than ever'

Arctic ice is receding 'more quickly than ever'

Making Tabasco Sauce and working to save wetlands

Making Tabasco Sauce and working to save wetlands

A man drowned Sunday after saving his girlfriend from drowning in Lake Michigan at a Michigan City beach.

The owner showed up at the customer's room and began throwing her property into the parking lot and pushing her in the process, police said.

The suspect then fled the bank heading east toward the parking lot at a nearby dry cleaners where he entered a silver/gray colored Jeep SUV, police said.

2 charged in I-94 shooting had run-in with victims at beach, records show

The 18-year-old victim underwent several surgeries as a result of her wounds and will need long-term physical therapy, court records state.

Deaths of 2 inmates at Westville prison under investigation, DOC says

Police found a 51-year-old man dead from an apparent stab wound to the chest late Wednesday in Hammond, an official said.

Cause of death determined for woman found near Porter Beach, coroner says

The manner of the woman's death is still pending and the investigation is ongoing, Porter County Coroner Cynthia Dykes said in a prepared statement.

24-year-old James A. King, of Miami, has been charged with murder in perpetration of a robbery and armed robbery, the Lake County Sheriff's Department said Sunday.

The suspect was described as a tall, slender black man who was wearing a blue hard hat, goggles and a mask covering his face from his nose to his chin, police reported.

Police are investigating the death of a woman who was found on the side of a road near Porter Beach Wednesday.

THE TIMES A lone shopper walks into the Woodmar Mall in Hammond on Tuesday. The mall's remaining days appear numbered, as developers plan to tear down the mall in stages and build new stores.
© Copyright 2021 NWI Times, 601 W. 45th Ave. Munster, IN | Terms of Use | Privacy Policy
Powered by BLOX Content Management System from TownNews.com.
You don't have any notifications.