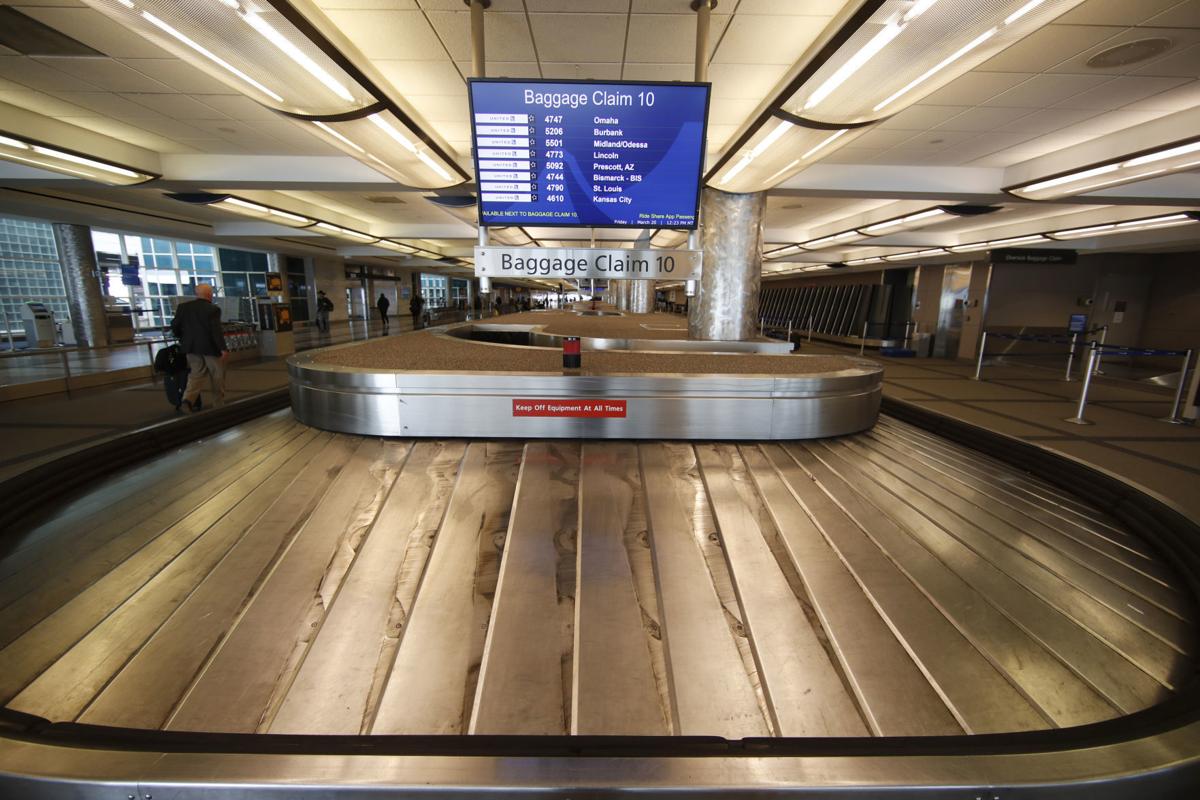 An empty baggage carousel spins in Denver International Airport as travelers deal with the spread of the coronavirus in Denver on March 20, 2020. 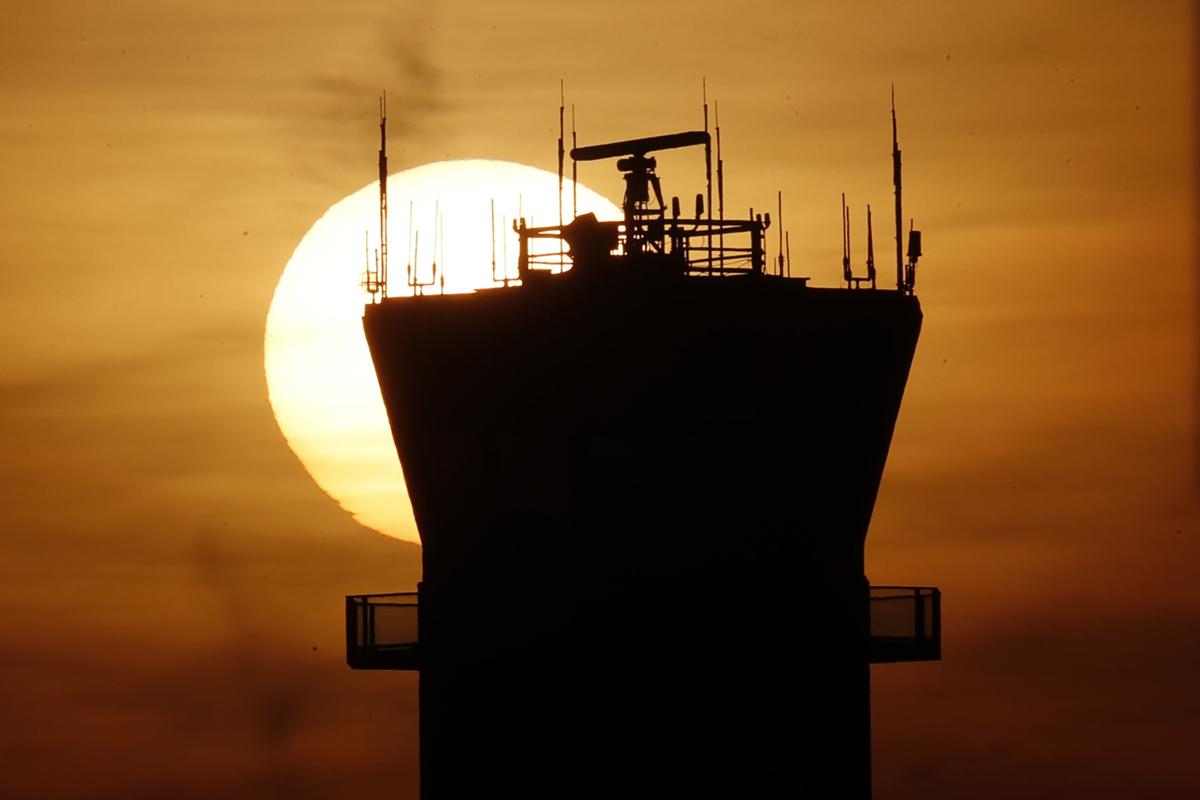 The sun sets behind the control tower at Chicago's Midway International Airport.

Airline service in the United States is teetering on the brink of collapse, with near-empty planes and coronavirus outbreaks that have left some air traffic control towers empty.

Even with sharply reduced schedules, airlines are consolidating some of the remaining flights because passengers aren’t showing up.

An official of one major U.S. airline, who asked that they and their airline not be identified, ticked off more than a dozen flights that departed on Tuesday morning with fewer than 10 passengers on board. In a few cases, pilots and flight attendants outnumbered passengers.

The official said the average flight was just over 20% full and that figure is expected to drop into the teens by the weekend.

The Transportation Security Administration said it screened 331,000 people at airport checkpoints on Monday, an 86% decline from the corresponding Monday a year ago, more than 2.4 million people poured through checkpoints.

Major airlines are drafting plans in case they must shut down domestic flights because of a lack of air traffic controllers or airport screeners.

“We have plans in place in case that happens,” the airline official said. “It’s a dire situation.”

An official at another major carrier called it “prudent contingency planning” given that health experts advise against gatherings of more than 10 people.

“We do not have plans to voluntarily ground, (but) we’re wary of government actions ... that could force us to ground the airline,” such as the Federal Aviation Administration closing control towers or airspace or governors ordering that airports be shut down, said the person, who like others spoke on condition of anonymity to discuss planning that has not been made public.

The Wall Street Journal reported that government agencies were considering ordering a shutdown of virtually all passenger flights within the U.S. The newspaper said, however, that President Donald Trump and his advisers are reluctant to order a shutdown partly because passenger planes also carry U.S. mail and vital cargo.

The FAA, which provides air traffic control across the country, declined to comment on whether the agency was considering ordering a shutdown. “We don’t comment on speculation,” said FAA spokesman Ian Gregor. “The FAA is focused on the health and safety of its workforce while continuing to provide a safe air transportation system.”

Administration officials have repeatedly declined to rule out the possibility of halting domestic airline travel while saying no such shutdown was imminent. Trump said Monday he was not considering new travel restrictions.

“They thought we were going to have bans within the United States. We didn't do that,” he said at a White House briefing. “We are not going to have that. Hopefully, that will take care of itself.”

The airlines and their labor unions are lobbying Washington for relief. A proposal by Senate Republicans would provide $50 billion in loan help and another $8 billion for cargo carriers, but the airlines say they need cash grants to avoid layoffs in an industry that employs about 750,000 people.

House Democrats propose $40 billion in grants to airlines and contractors to preserve pay and benefits for workers. Democrats would add provisions including telling airlines to cut carbon emissions in half by 2050 and to include labor union representatives on their boards. Prominent House Republicans immediately trashed the proposal.

Reports that Congress and the Trump administration were bridging their differences and nearing a deal on a massive stimulus bill sent airline stocks and the broader market soaring on Tuesday. American Airlines gained 36%, United Airlines rose 26% and Delta gained 21%. All three remain down more than 50% for the year, however.

U.S. airlines have already cut most of their international flights and have announced plans to reduce service within the U.S. by up to 40% in April. Those drastic planned cutbacks in service now seem hopelessly optimistic, given the few people who continue to fly.

About 8,500 U.S. flights were canceled Tuesday, according to tracking service FlightAware. In some cases, airlines consolidated flights to avoid flying empty planes.

United Airlines canceled 51% of its flights, American dropped 46% of its schedule, and Delta scrapped 38% by late afternoon, according to FlightAware. Southwest canceled 15%.

Fewer flights have left fewer people for TSA officers to screen. As recently as March 8, TSA screened more than 2 million travelers, but the numbers have dropped nearly every day since then. There are also fewer screeners.

The TSA said 24 screeners and six other employees at 14 U.S. airports have tested positive for the new coronavirus in the past two weeks. The most recent confirmed cases were at Dallas-Fort Worth International Airport, Detroit Metropolitan Wayne County, Indianapolis International Airport and McCarran in Las Vegas.

Airlines concerned about the federal government are now facing travel restrictions imposed by one state. In Florida, Gov. Ron DeSantis issued an executive order requiring anyone arriving on a flight from New York City or New Jersey to quarantine themselves for two weeks. Southwest said the order had not caused any additional flight cancellations. American said it was notifying passengers about the Florida edict.

The new virus and a global recession will do more financial damage to airlines than previously estimated, according to an industry trade group.

The International Air Transport Association said Tuesday that it now estimates that passenger revenue worldwide could fall as much as $252 billion, or 44%, compared with last year because of the decline in travel. That is based on strict travel restrictions lasting up to three months, followed by a slow economic recovery.

Less than three weeks ago, the group estimated the virus could reduce airline revenue by up to $113 billion compared with 2019, before a new round of travel restrictions that have stopped most international air travel.

Gov. Holcomb recommends Hoosiers 'hunker down' for next two weeks

Chicago's plan to reserve at least 1,000 hotel rooms through partnerships with five hotels is the first such sweeping strategy unveiled in the U.S. aimed at relieving the pressure on hospitals that are the only option for the seriously sick.

Police officers throughout Porter County have been given the green light to make arrests if necessary to enforce the governor's order for Hoosiers to remain home to combat the spread of COVID-19.

High chance for tropical development off the East Coast

High chance for tropical development off the East Coast

Beijing-based reporter surprised by US stance on masks

Beijing-based reporter surprised by US stance on masks

An empty baggage carousel spins in Denver International Airport as travelers deal with the spread of the coronavirus in Denver on March 20, 2020.

The sun sets behind the control tower at Chicago's Midway International Airport.