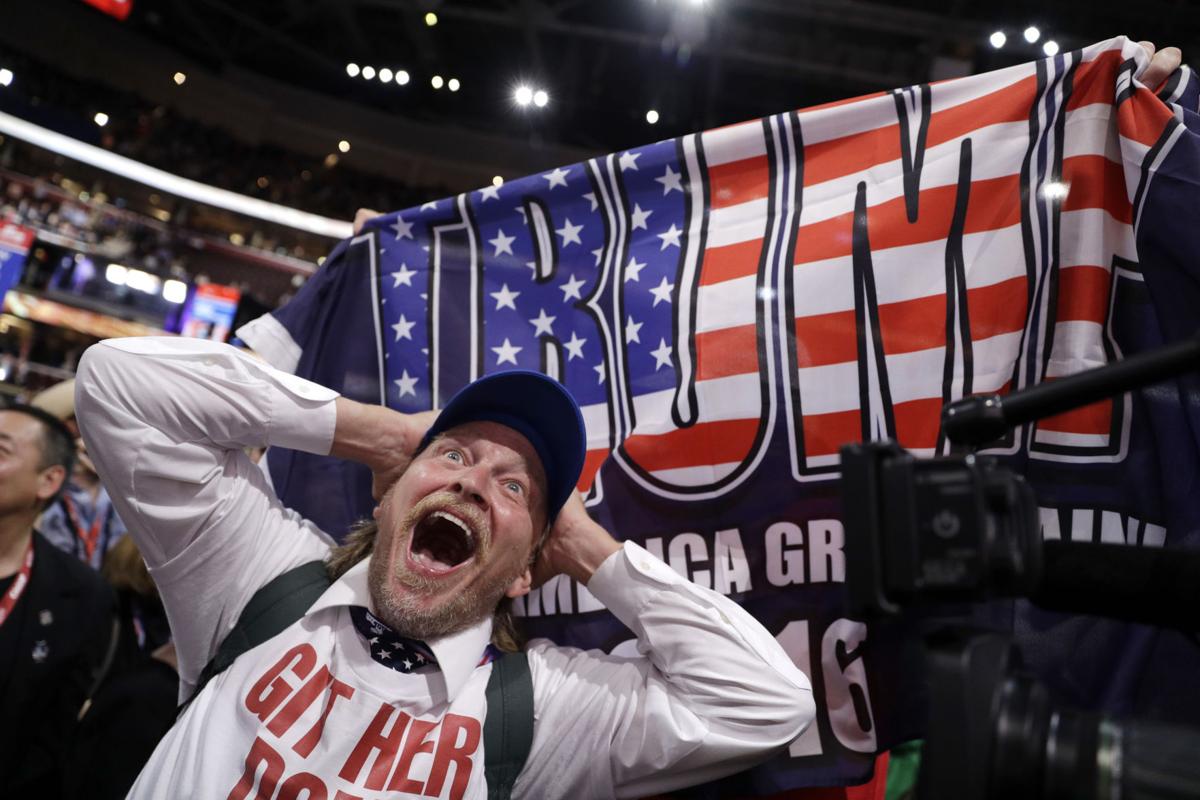 California delegate Jake Byrd reacts as New York delegate Bob Hayssen holds up a Trump flag during the second day of the Republican National Convention on Tuesday in Cleveland. 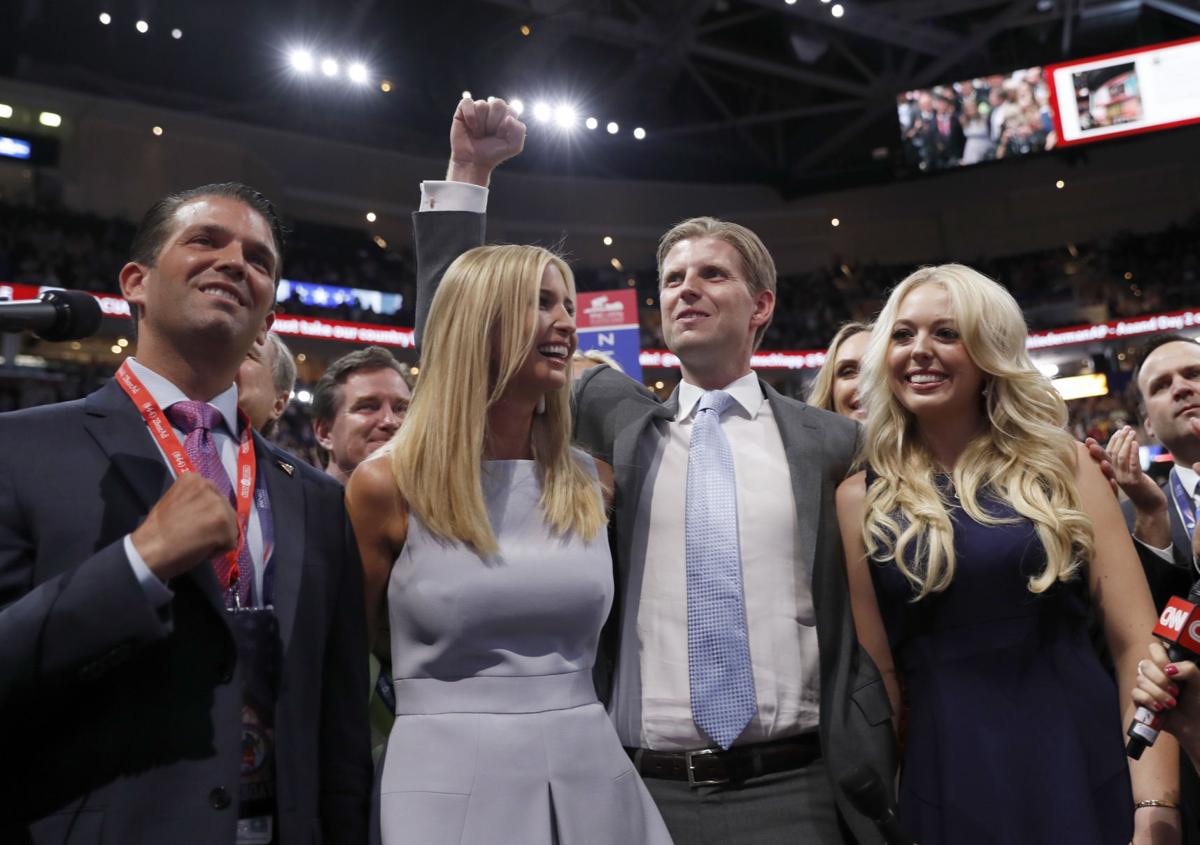 CLEVELAND — United for a night, Republicans nominated Donald Trump on Tuesday as their presidential standard-bearer, capping the billionaire businessman’s stunning takeover of the GOP and propelling him into a November faceoff with Democrat Hillary Clinton.

“This is a movement, but we have to go all the way,” Trump said in videotaped remarks beamed into the convention hall.

For Trump, the celebrations were a much-needed opportunity to regroup after a chaotic convention kickoff that included a plagiarism charge involving wife Melania Trump’s address on opening night. There were no big missteps Tuesday, but the event was void of the glitzy, Hollywood touch Trump promised, with a series of Republican officials parading on stage to level sharp, but repetitive, criticisms of Clinton.

New Jersey Gov. Chris Christie was one of the few speakers to energize the crowd, delivering a full-throated takedown of Clinton and imploring delegates to shout “Guilty!” as he ticked through numerous accusations of wrongdoing.

“We didn’t disqualify Hillary Clinton to be president of the United States, the facts of her life and career disqualifies her,” Christie said.

For some Republicans, the night also offered a glimpse of what could have been. House Speaker Paul Ryan, who resisted calls to jump into the presidential race, made a vigorous call for party unity — though his message focused more on the risks of letting Democrats keep the White House and make gains in Congress than a rationale for Trump.

“Let’s compete in every part of America, and turn out at the polls like every last vote matters, because it will,” Ryan said.

Senate Majority Leader Mitch McConnell, who has been a lukewarm supporter of Trump, was greeted with a smattering of boos as he took the stage, reflecting many Republicans’ dissatisfaction with party elites.

It was one of the occasional flurries of dissent on the convention floor, including jeers as states that Trump did not win recorded their votes during the nominating roll call vote. Still, Trump far outdistanced his primary rivals, and his vice presidential pick, Indiana Gov. Mike Pence, was also formally nominated.

Trump was put over the top by his home state of New York. Four of his children joined the state’s delegation on the convention floor for the historic moment and appeared overwhelmed with emotion.

Trump’s son and daughter Tiffany Trump were scheduled to address the convention Tuesday night, part of a weeklong campaign effort to highlight the brash billionaire’s softer side. Campaign officials said a central goal of the Cleveland gathering was improving the image of a candidate seen by large swaths of voters as harsh and divisive.

Melania Trump was praised for making progress on that front during her Monday night address. She spoke of her husband’s “simple goodness” and his loyalty and love of family — while noting the “drama” that comes with Trump in politics.

But her speech was quickly overtaken by charges that it included two passages— each 30 words or longer — that matched a 2008 Democratic convention address by Michelle Obama nearly word-for-word.

Trump’s campaign offered no apologies, with top adviser Paul Manafort telling The Associated Press the matter had been “totally blown out of proportion.”

Still, the plagiarism controversy and other unforced errors by the campaign cast a shadow over the convention and raised fresh questions about Trump’s oversight of his campaign, which gives voters a window into how a candidate might handle the pressures of the presidency.

Clinton pounced on the tumult, saying the Republican gathering had so far been “surreal,” comparing it to the classic fantasy film “Wizard of Oz.”

“When you pull back the curtain, it was just Donald Trump with nothing to offer to the American people,” Clinton said during a speech in Las Vegas.

Trump’s campaign did succeed in tamping down late efforts by dissident delegates to derail the convention, including during Tuesday’s roll call vote. Campaign officials invested significant time arguing to delegates about the importance of presenting a united front during the televised convention.

But Colorado’s Kendal Unruh, a leader of the anti-Trump forces, called the convention a “sham” and warned party leaders that their efforts to silence opposition would keep some Republicans on the sidelines in the fall campaign against Clinton.

LaPorte mayor passes on chance to be delegate at RNC

CLEVELAND — The art of the coronation has taken something of a beating at the Republican National Convention. Nevertheless, Donald Trump now h…

Police break up skirmishes among demonstrators in Cleveland

This data visualization profiles the demographic makeup, including voter registration, of Cleveland, site of the 2016 Republican National Convention.

A 10-question quiz on U.S. political convention practices and firsts.

CLEVELAND — Painting a bleak picture of America’s future, Republicans promised a new era of security with Donald Trump as president as they op…

UPDATE: Trump presents 'partner' Pence, but no doubt who's the star

UPDATE: It's Pence: Trump announces his VP choice on Twitter

A data visualization of common words and themes used in presidential nomination acceptance speeches since 2008.

California delegate Jake Byrd reacts as New York delegate Bob Hayssen holds up a Trump flag during the second day of the Republican National Convention on Tuesday in Cleveland.