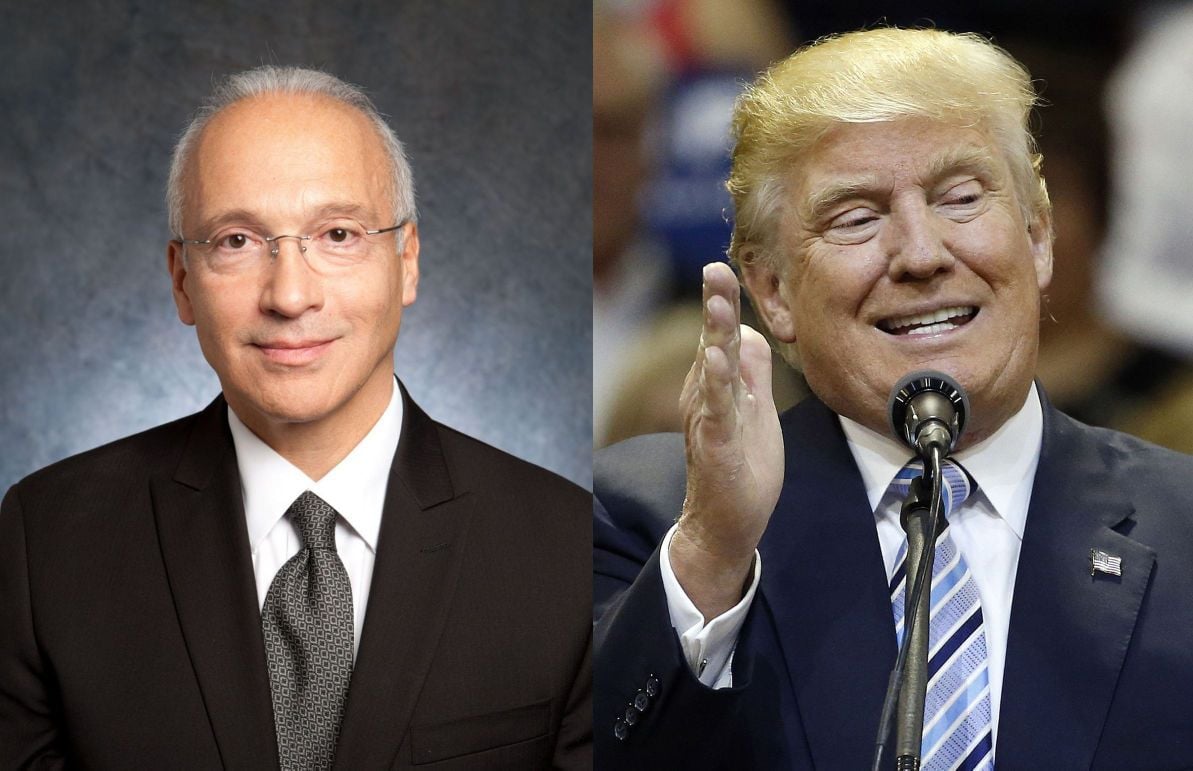 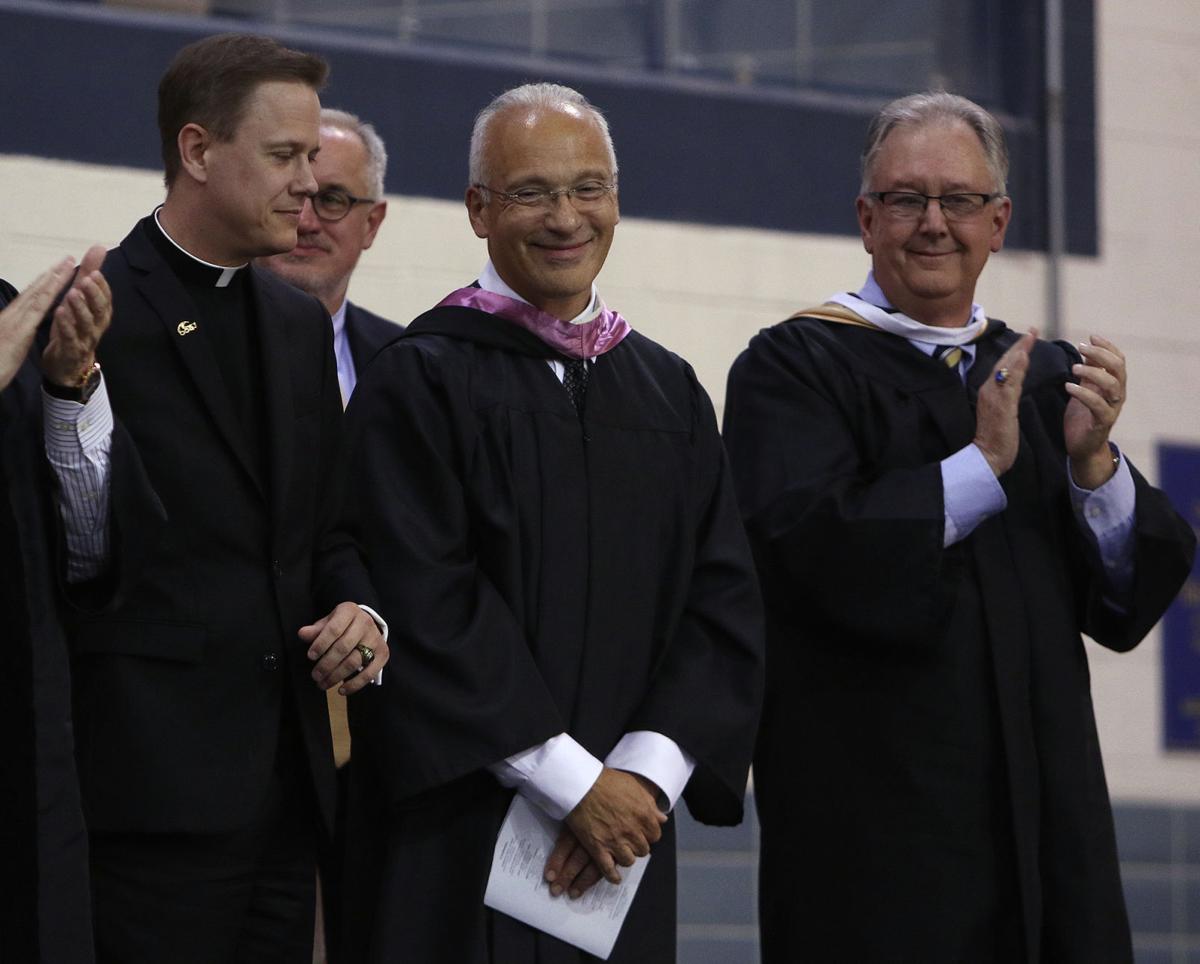 Judge Gonzalo Curiel, center, is applauded after giving the commencement address at Bishop Noll Institute by the Rev. Kevin Scalf, left, and BNI President Paul Mullaney, right, Friday at the school in Hammond. Curiel gained national attention last year when then-candidate Donald Trump called into question his abilities as a federal judge due to his Mexican heritage.

Judge Gonzalo Curiel, center, is applauded after giving the commencement address at Bishop Noll Institute by the Rev. Kevin Scalf, left, and BNI President Paul Mullaney, right, Friday at the school in Hammond. Curiel gained national attention last year when then-candidate Donald Trump called into question his abilities as a federal judge due to his Mexican heritage.

SAN DIEGO — An Northwest Indiana native federal judge, whose Mexican heritage Donald Trump used to paint him as biased against him in a 2016 court case because of his immigration stance, will hear arguments in a lawsuit that could block construction of a border wall with Mexico.

Judge Gonzalo Curiel will hear arguments Friday on a lawsuit from the state of California and advocacy groups that a border wall with Mexico must go through normal environmental reviews, which could cause major delays.

The Trump administration wants Curiel to dismiss the challenges, and wall opponents want him to immediately rule in their favor.

Trump repeatedly criticized Curiel in 2016 as lawsuits against Trump University neared trial, suggesting that the judge's Mexican heritage meant he could not be impartial in the fraud cases. Trump settled for $25 million shortly after winning the election, without admitting wrongdoing.

Curiel, who was forced out of his home and needed around-the-clock protection when he prosecuted Mexican drug kingpins in the 1990s, was unfazed by Trump's criticism during the campaign, said Gregory Vega, a former U.S. attorney in San Diego and longtime friend.

"He's had a credible threat made on his life. I don't think when he was called names, I don't think that really bothered him," said Vega.

The Center for Biological Diversity was first to sue over the wall, with three other groups — Sierra Club, Defenders of Wildlife and the Animal Legal Defense Fund — later filing a lawsuit. California Attorney General Xavier Becerra, a Democrat, was close behind, and Curiel consolidated all three cases into one.

At issue is a 2005 law that gave the Homeland Security secretary broad powers to waive dozens of laws requiring environmental and other reviews, including the National Environmental Policy Act, Clean Air Act and Endangered Species Act. The reviews are time-consuming and subject to prolonged legal challenges.

The Trump administration has issued three waivers since August, two to build barriers in parts of California and one in part of New Mexico. President George W. Bush's administration issued the previous five waivers.

California and the advocacy groups contend the administration's authority to waive environmental reviews expired. The Center for Biological Diversity argues in its lawsuit that the 2005 law "cannot reasonably be interpreted to exempt compliance with the waived laws in perpetuity."

California argues that the powers expired in 2008, a deadline set by Congress to have barriers on at least 700 miles (1,120 kilometers). Barriers now blanket 654 miles (1,046 kilometers), but additional layers bring the total above the congressional requirement.

The Trump administration argues that the powers are still in effect and that Curiel, or any judge, can't overrule Congress.

Trump has insisted on $25 billion for border security measures as part of an immigration deal that would include a path to citizenship for 1.8 million people. A proposal by Customs and Border Protection calls for spending $18 billion over 10 years to extend barriers to nearly half the 2,054-mile (3,286-kilometer) border.

One of the administration's environmental waivers is for San Diego, where private contractors recently built eight imposing prototypes to guide designs for future construction.

UPDATE: Ryan: Trump made 'textbook definition of a racist comment'

Trump surprised at GOP criticism of his comments on judge

WASHINGTON (AP) — President Donald Trump unveiled a $4.4 trillion budget for next year that heralds an era of $1 trillion-plus federal deficit…

SAN DIEGO — President Donald Trump has won a judge's permission to build a border wall with Mexico. Now he just needs the money.