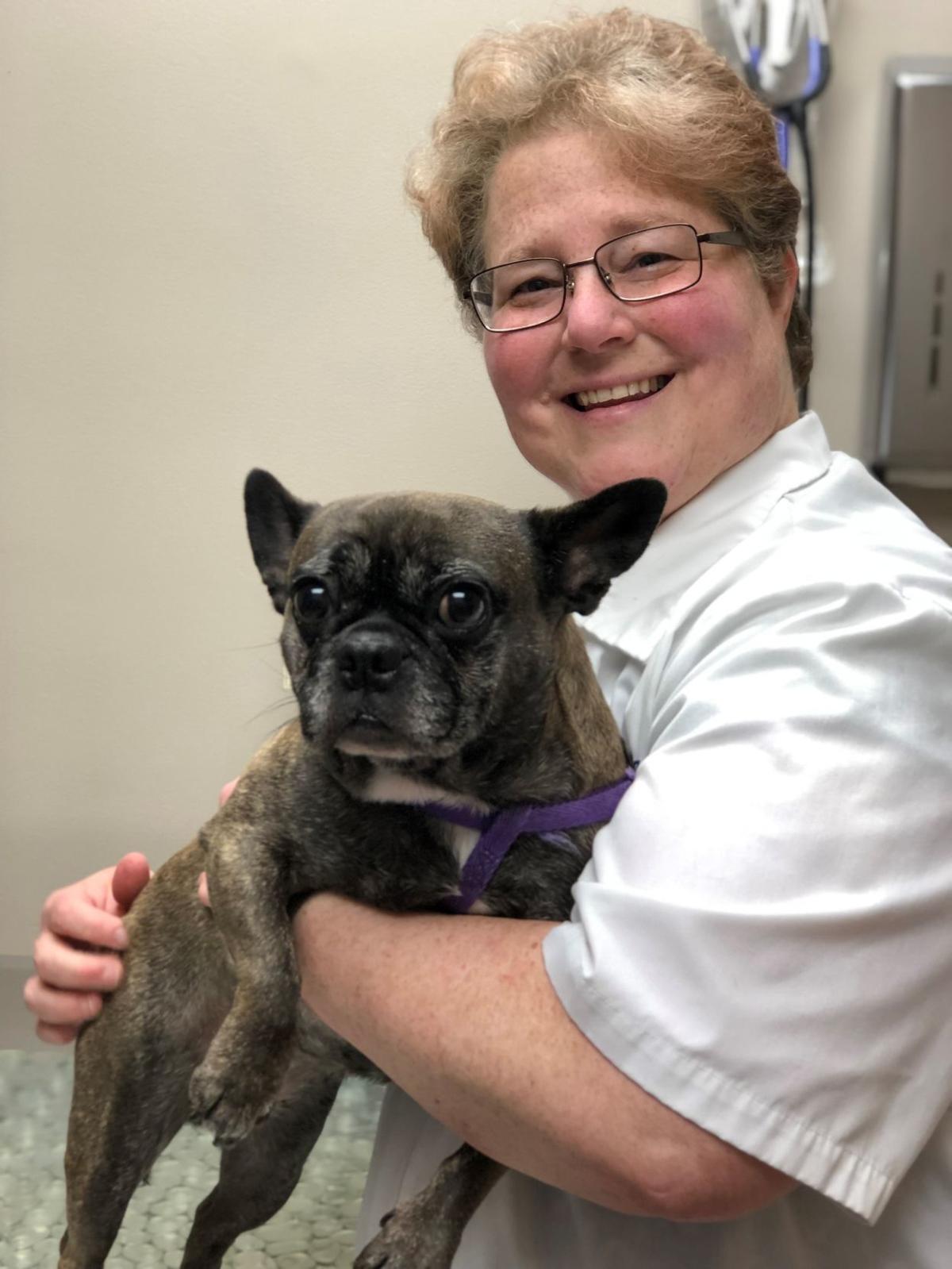 Dr. Molly Farrell with a patient at Dyer Animal Clinic 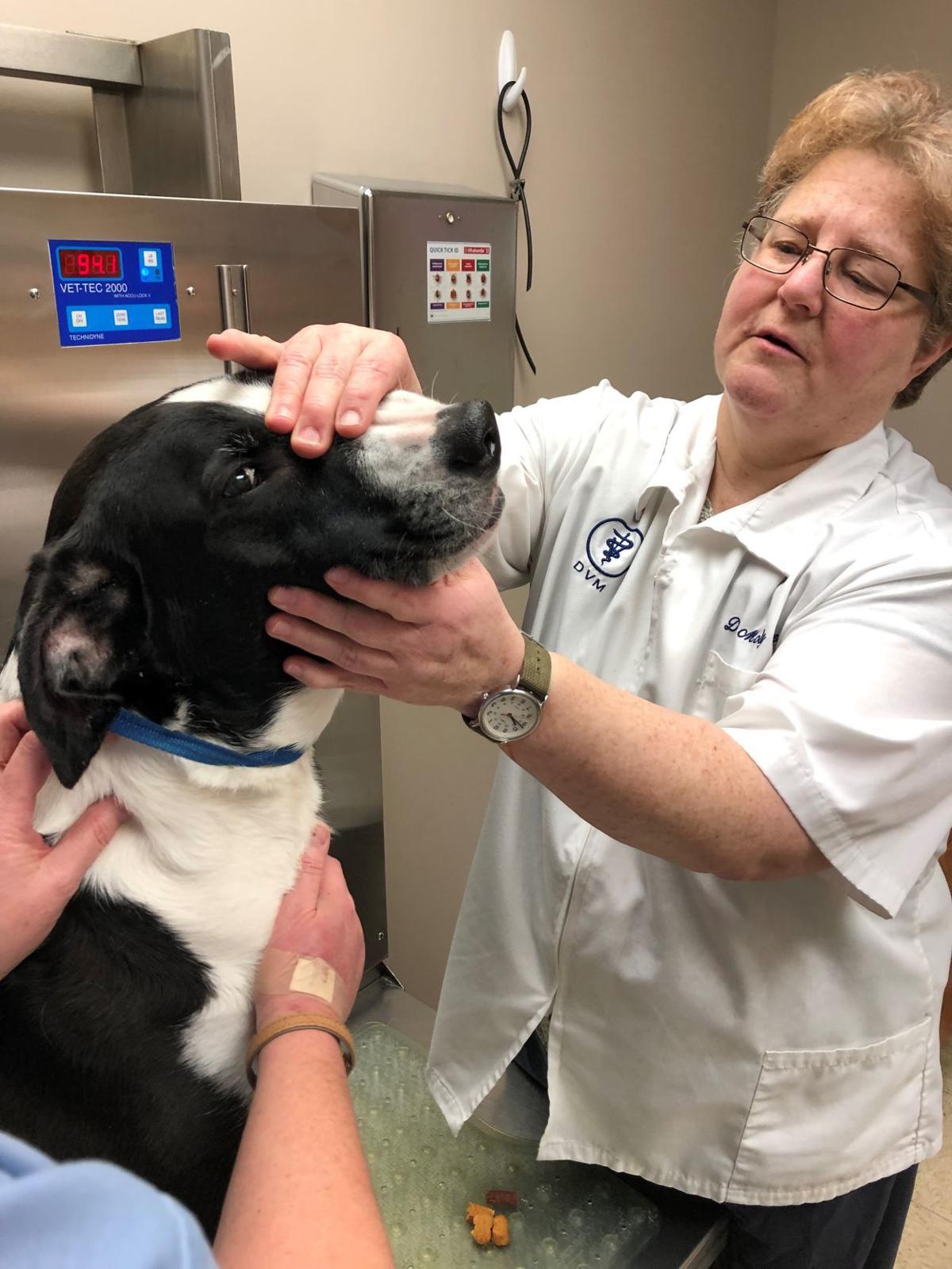 Ever pick up an illness from a pet? It can happen. The reverse is possible too, though rare.

“Maladies that are passed from animal to human are called ‘zoonoses,’ ” said Tom Corey, office manager at Dyer Animal Clinic. “Illnesses that are transmitted from humans to pets are referred to as ‘reverse zoonoses.’ ”

Dr. Molly Farrell, a veterinarian and owner of Dyer Animal Clinic who has practiced for almost 30 years, once treated a possible MRSA transfer from human to pet. “A pet came to our facility for a mass removal surgery. We performed the surgery and sent the pet home,” she said. “After the pet returned for suture removal, the wound was not healing.”

Farrell cultured the site after several attempts to help the wound heal and found the pet had MRSA — staph bacteria that has developed a resistance to many of the antibiotics used to treat ordinary staph infections.

“I explained to the client that their pet needed an antibiotic that was not resistant to that strain of MRSA,” Farrell explained. “That is when the client revealed that they too were being treated for MRSA prior to their pet’s surgery.”

MRSA can cause skin infections, surgical site infections, pneumonia and other conditions in humans. It also can be carried by dogs and transmitted in both directions. If a human in the household has been diagnosed with MRSA, dogs should be kept away from that person.

Dr. Karen Huppert, who has been a veterinarian for two decades and also works at Dyer Animal Clinic, said she once saw a case of ringworm that was passed from a human to an indoor cat. The cat had hair loss and was scratching herself extensively.

“After examination, I determined that the cat had ringworm, though it was unusual that an indoor cat would contract the disease,” Huppert said. “I informed my client that ringworm is typically transmitted from people or other pets, and then learned that the pet owner herself had been dealing with ringworm.”

Ringworm is perhaps the most common human-animal infectious disease. Caused by a fungus, it's called ringworm because it can cause a red, itchy circular rash (shaped like a ring). It can be transmitted via contaminated objects including clothing, towels, bedding or brushes, or by direct contact with an infected individual.

A report published by Oregon State University detailed the first instance of fatal human-to-cat transmission of the H1N1 flu virus in 2009 in Oregon. Dogs and ferrets also have contracted the infection from humans. Pets experience similar symptoms as people, including appetite loss, respiratory disease and, in rare cases, death. Studies reveal that pet exposure and reaction to human flu viruses is more common than previously suspected. To be safe, if you are suffering from flu symptoms, avoid close contact with family pets.

The website PetMd.com notes that “when a dog is exposed to a person who is infected with a viral infection called the mumps, the dog may develop the same infection,” but it's rare.

Though dogs and cats are more resistant to salmonella, the CDC warns that the risk should not be discounted. Likewise, the chance of human transmission of salmonella to pets should not be ignored. While most cases of salmonella are linked to food poisoning, animals can be infected by humans carrying the disease. Signs of infection in pets are similar to those in humans, including headache, fever, nausea, vomiting, abdominal cramps and diarrhea.

The CDC defines giardiasis as a diarrheal disease caused by the microscopic parasite giardia. The intestinal parasite is passed in feces. It may be spread via drinking water, including wells, lakes and streams. Giardia can infect dogs, cats and humans, and can spread from one to the other.

A CDC report from 2004 documented the first known epidemiologically associated tuberculosis in human and canine cases confirmed by M. tuberculosis genotyping. A woman diagnosed with TB transmitted the disease to her 3½-year-old Yorkshire terrier. TB is a chronic, primarily respiratory infectious disease.

A National Institutes of Health study found that pets inhaling secondhand smoke are more likely than humans to suffer the negative consequences, such as cell damage, weight gain, and cancer. So it's important to limit a pet's exposure to smoke.

Hobart organization spays and neuters cats in the Region

Chuck Vandever grew up surrounded by dogs and cigarette smoke. Everyone in his family smoked; Chuck himself started at 11.

In many households, pets are considered members of the family, making their care a top priority. Just like humans, animals have feelings but c…

Dr. Molly Farrell with a patient at Dyer Animal Clinic