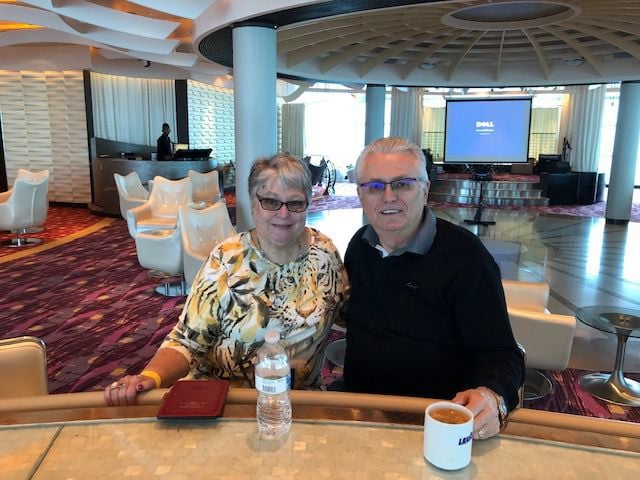 Linda and Michael Mason are seen aboard the Celebrity Eclipse on Monday morning. The Masons are waiting on word from Chilean officials on whether they can disembark from the ship and head home. 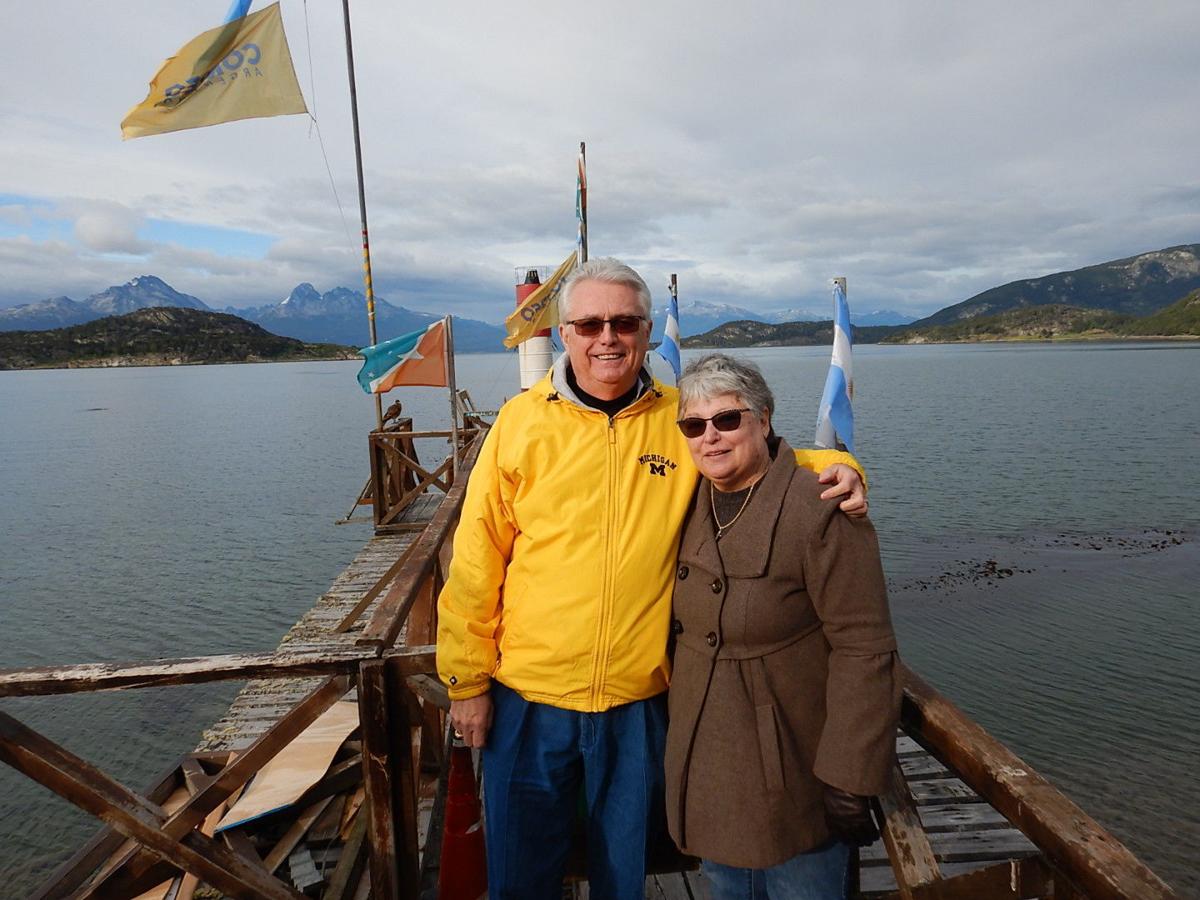 Michael and Linda Mason pose for a photo at the End of the Earth in Ushuaia, Argentina. The Masons are aboard the Celebrity Eclipse, waiting on word from Chilean officials on whether or not they can disembark.

After being denied entry to a port in San Antonio, Chile, around 2:30 a.m. Sunday, the Celebrity Eclipse is getting ready to return to the U.S.

At the end of February, Michael Mason and his wife, Linda, left for what was supposed to be a month-long cruise. The couple had planned to do a back-to-back trip starting with a 15-day cruise from Buenos Aires to Santiago, Chile. Then, they were going to embark on another 16- to 17-day trip from Santiago to San Diego, California.

The voyage honoring Michael's retirement was cut short after cruise line companies began to take precautions in the midst of a global pandemic.

Due to continued port closures and global travel restrictions, as well as to help ensure the continued safety of our guests and crew, we are temporarily suspending all cruising operations globally beginning tomorrow, 3/15th wand plan to resume sailing again on Saturday, 4/11. pic.twitter.com/Nle2shDNY4

On Tuesday, Michael Mason, who lives in the Lakes of the Four Seasons, said the ship was denied entry into any Chilean port, preventing passengers from disembarking.

The port of San Antonio, Chile, is now closed to all cruise ships. Celebrity Cruises is working with government officials to provide a controlled debarkation plan that would ensure all guests have travel arrangements to leave the country.

The disembarkation was halted after Chile Minister of Health Jaime Mañalich said in a tweet Saturday the country had suspended cruise ships docking in Chilean ports beginning Sunday morning.

While the ship was not allowed to dock, it is anchored in Valparaiso, Chile, waiting for supplies, Mason said.

Local Chilean authorities have given Celebrity Eclipse permission to refuel and load provisions in Valparaiso, Chile. The ship will then sail to San Diego, where it was already scheduled and cleared to arrive later this month.

"Chilean nationals were allowed to be taken from the ship but no one else," Mason said in an email.

All of the supplies coming to the ship need to be transported by small barges, a process the captain estimates will take a day, Mason said. Because people planned on disembarking in Santiago, there are concerns some passengers won't have enough medication for the next leg of the trip, Mason added.

"They were asking anyone with that concern to bring their medication needs to the attention of the Ships Medical Center as they were going to try and have prescriptions filled by the Chilean authorities," he said.

After supplies are replenished, the boat will make its way to San Diego, Mason said. The trip will take about 10 days.

Though the ship was unable to dock due to growing concerns about COVID-19, Mason said there isn't anyone aboard with the coronavirus disease.

"No one on the ship is ill," Mason said.

Other than not being able to dock, everything is continuing like normal. Passengers aren't confined to their rooms, there's free WiFi and drinks and activities are ongoing.

"They've done everything they can to make it bearable for people," Mason previously said.

About two weeks ago, Michael and Linda Mason headed to Argentina to board the Celebrity Eclipse for a 15-day cruise from Buenos Aires, Argentina, to Santiago, Chile.

The victim was a Chicago woman in her 60s who had an underlying health condition and had extended contact with another infected person, officials said.

Northwest Indiana health officials could see a command center set up as soon as next week at Gary/Chicago International Airport.

The bus monitor’s spouse, a bus driver in the district, has not been tested due to a lack of test kits, according to the school city.

Methodist Hospitals confirmed its Southlake Campus is treating its first patient who tested positive for the COVID-19 virus.

Community Hospital in Munster has a confirmed case of COVID-19.

The five Catholic bishops of Indiana have suspended all public Sunday and weekday Mass celebrations, effective Wednesday, and until further notice amid concerns of spreading coronavirus.

The state has suffered its second Hoosier death as a result of the virus, state health officials announced Tuesday.

Ordinarily held inside the fire department's bay area, cars steadily snaked their way through the city to the Crown Point Fire Rescue building and the drive-thru pickup for corned beef and cabbage.

On Tuesday police announced changes to protect city and public safety employees which are effective immediately.

While other child care options have dissipated since schools throughout the Region announced their shut down, some child care services remain open throughout Lake and Porter counties.

The wife of a local pastor is in critical condition after testing positive for the novel coronavirus.

9 baby koalas will melt your heart

9 baby koalas will melt your heart

Storm chaser travels over 300 miles to capture these incredible videos

Storm chaser travels over 300 miles to capture these incredible videos

Linda and Michael Mason are seen aboard the Celebrity Eclipse on Monday morning. The Masons are waiting on word from Chilean officials on whether they can disembark from the ship and head home.

Michael and Linda Mason pose for a photo at the End of the Earth in Ushuaia, Argentina. The Masons are aboard the Celebrity Eclipse, waiting on word from Chilean officials on whether or not they can disembark.