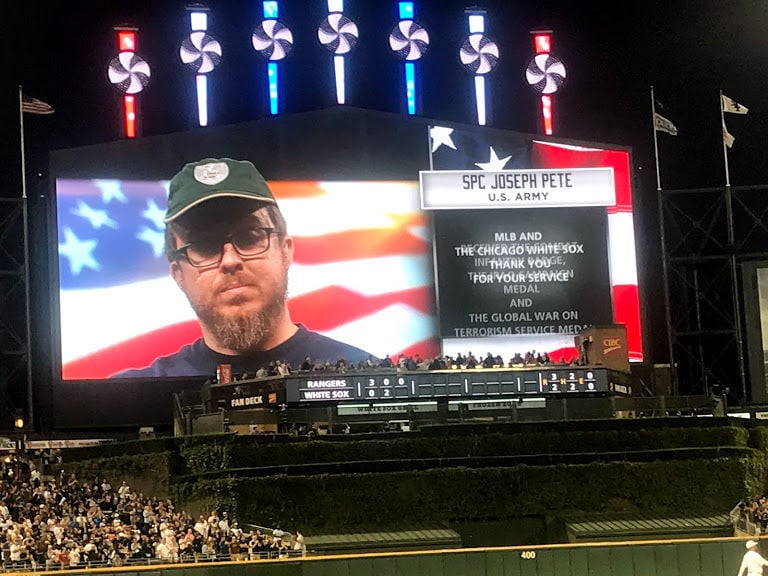 Every summer, I spend a lot of time at Guaranteed Rate Field, usually in cheap seats in the outfield or the upper deck.

Those seats, my grandfather told me, originally were so dizzyingly steep when the new Comiskey Park opened in 1991 that people fainted and had to be carted out on stretchers.

I come from a long line of White Sox fans, which is why I root for the Pale Hose even though, as Jean Shepherd once joked, they often "instantly fall 26 games out of first place in May, which is as it should be."

Over the years, I've explored all around Guaranteed Rate Field looking for some new statue or poster inscribed with team history I haven't seen, or some new concession food I haven't tried. My work has occasionally taken me to the administrative offices, where I've marveled at the gleaming 2005 World Series trophy and watched Southpaw clown around. But I had never been to this mysterious Gate 3 1/2, which we had been instructed to arrive at an hour early before the Aug. 23 game against the Texas Rangers.

It was a private entrance to the Magellan Scout Seats that offered a glimpse into how the other half lives. There was no long line for me and the rest of the rabble to plod through. We came to a desk, where we were told to wait. There were luxurious-looking leather chairs amid ferns in the reception area and a swanky lounge with high-priced cocktails and fancy food off to the right. One lanky, vaguely European fan was clad in a stylish black tailored suit, looking like a more posh version of John Wick.

A White Sox ball girl suddenly approached and asked me if I "was the hero."

It was truly a cringe-worthy moment.

I was at "The Rate" or whatever they're calling it these days because my amazing wife, Meredith, arranged to have me honored as the White Sox Hero of the Game in recognition of my service in the U.S. Army, which included a deployment to Iraq during Operation Iraqi Freedom III. The team recognizes a service member on the jumbotron during the middle of the third inning of every game.

Earlier this season, I groused it always seemed to be a National Guardsman who never left the motor pool and never a wartime infantryman, planting a seed in my remarkably considerate and thoughtful wife's head. She took the initiative to sign me up for the program, even finding my DD 214 without telling me.

"That's me," I sheepishly replied.

I was the "White Sox Hero of the Game" for that night's purposes. I may have served in the Iraq War but know I'm not an actual hero. Many other soldiers did far more than me, showed far more bravery than me and sacrificed a hell of a lot more than me. I volunteered for military service after the Sept. 11 terrorist attacks but just went where they told me and did what they told me and was hardly what you would call a hero. I was, for instance, at the Second Battle of Fallujah, but I was out on the perimeter and not in the thick of the city kicking down doors, never knowing if an insurgent lay in ambush with a finger on the trigger.

But the White Sox are a class organization that honors military service members and veterans, taking their time to thank them for their service on a grand stage. They gave me a swag bag with a baseball autographed by the slugger and newly minted Hall of Famer Harold Baines and a card signed by manager Rick Renteria.

The house was packed because it was a Friday night and there was a fireworks show after the game, an Elvis Night promotion followed by an Elvis impersonator concert at home plate, parachuting Elvises (or is it Elvii?) landing on the field, and growing excitement over a young, rebuilding franchise on the upswing.

At the appointed time, they led me through the bowels of the stadium to the third base line just behind the dugout. The camera man would position me where he wanted, and then I would wave when the ball girl waved. I was repping my units by wearing a 25th Infantry Division with the "Electric Strawberry" patch and a 1-5th Infantry Battalion hat with the ever-fatalistic and uninspiring slogan "I'll Try, Sir" partly so I didn't have to shave just so I could wear my old uniforms without blatantly violating military regulations.

If I weren't an introvert, I probably would have enjoyed it more, but I just stood there mortified, awkwardly waving my hand limply like a sullen teen who would wash the car with this rag but put no damn effort into it. The cheering started right away as my face loomed several stories high on the scoreboard. My wife later said I looked grim. The brim of my hat shadowed my eyes.

As the crowd rose to its feet, the scoreboard started flashing details of military service such as that I served in Baghdad, Mosul and Fallujah, that I earned a Combat Infantryman's Badge and that I was stop-lossed in Iraq for an extra 55 days, which the Sox apparently culled from my DD 214. The crowd really roared when it was noted I enlisted after Sept. 11 and that I cheered the White Sox in what has been their only World Series appearance in my lifetime from Iraq.

Afterward, third base coach Nick Capra chatted me up and shook my hand, pressing a White Sox Hero of the Game coin into my palm the way a high-ranking officer would confer a challenge coin in the Army before sending me off back into the tunnel back to our seats, which were gratis.

There are many token displays of gratitude to veterans in our society. Chain restaurants offer free appetizers on Veterans Day. Home improvement stores will give you 10% off your purchase. People always say "thank you for your service" in an empty way that seems as rote and reflexive as "gesundheit" or "excuse me."

But the White Sox deserve all due credit because being given a standing ovation by 27,016 fans makes you really feel that your military service is appreciated and that a callous, uncaring world didn't just send you to possibly die over there in the desert for nothing. I would encourage any interested veteran to contact the White Sox front office about the Hero of the Game program.

Joseph S. Pete is a business reporter at The Times. The opinions are the writer's.

The Chicago White Sox are known for offering the widest selection of craft beer in Major League Baseball at Guaranteed Rate Field.

The That's So Region panel discusses Amazon finally delivering jobs to the Region, if Lakeshore PBS will ever return to the airwaves and wheth…

The Chicago White Sox are rebuilding and are likely to lose more games than they win this season.

A new photo book looks back at the history of Highland, one of Lake County's most established towns.

Ozinga, which has an extensive presence in Northwest Indiana, named Joe Sanders, a long-time executive with the company, to lead its local ope…

The White Sox are rebuilding after trading off some off their top talent for a haul of prospects, but that doesn’t mean you can’t enjoy yourse…

The White Sox first opened the Miller Lite Bullpen Sports Bar by the bullpen in right field in 1996, and they have reimagined it as a craft be…

It was an event more than a century in the making.

Northwest Indiana ranked seventh nationwide in house price appreciation over the past year.