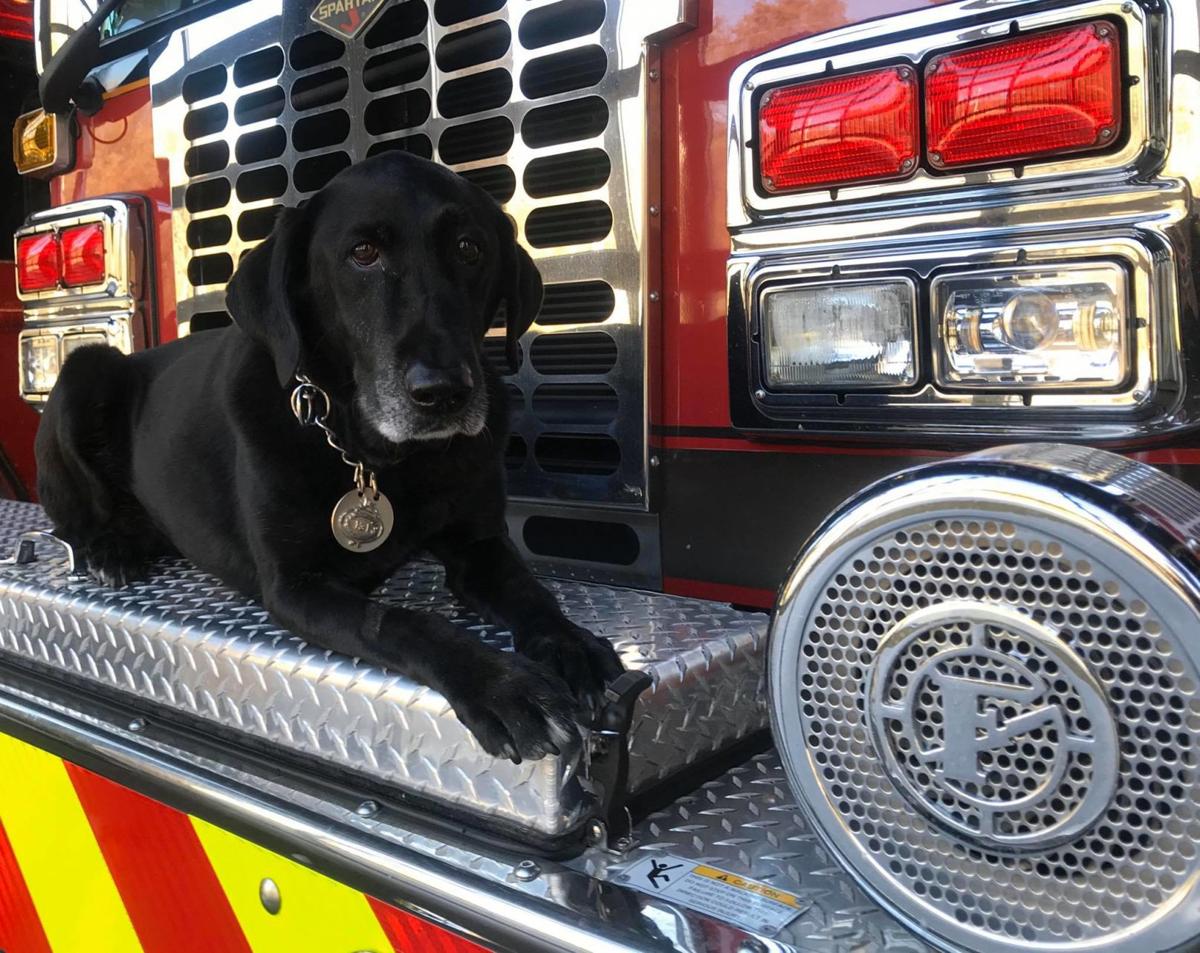 Firefighters are inviting the public to "A Salute to Bosco" from 1 to 3 p.m. Sunday at Woodland Park Oakwood Hall at 2100 Willowcreek Road in Portage. Bosco, a fire dog, was diagnosed with an aggressive form of cancer. 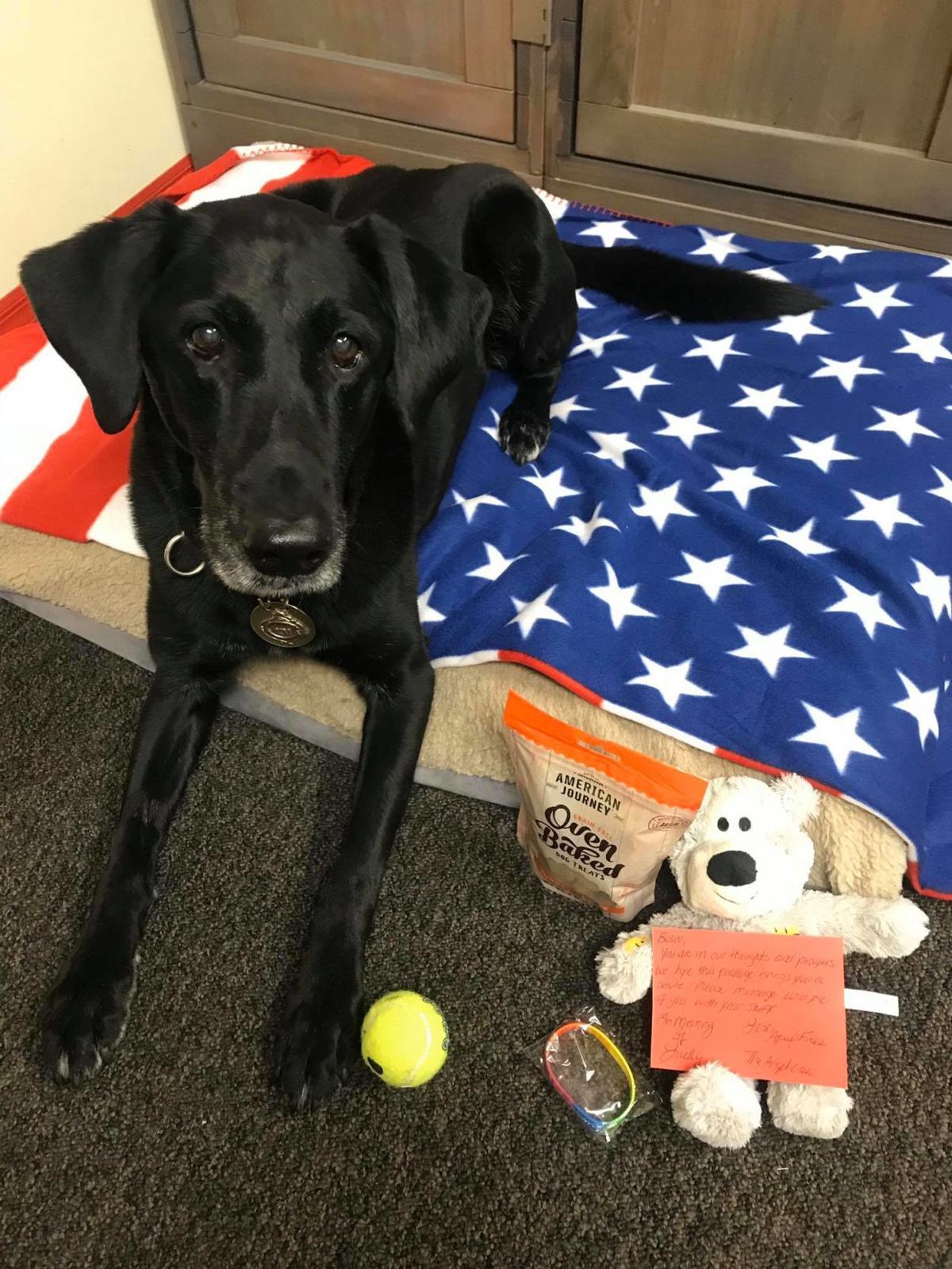 A nonprofit group named The Heart of Lucky sent a care package to Bosco's home containing toys and treats.

Firefighters are inviting the public to "A Salute to Bosco" from 1 to 3 p.m. Sunday at Woodland Park Oakwood Hall at 2100 Willowcreek Road in Portage. Bosco, a fire dog, was diagnosed with an aggressive form of cancer.

A nonprofit group named The Heart of Lucky sent a care package to Bosco's home containing toys and treats.

PORTAGE — Following a devastating cancer diagnosis, Bosco the fire dog only may have a few more months to live, veterinarians said. His family of firefighters are asking the community's help to cheer up the black Labrador, who has served the community for years.

Portage Fire Department's Bosco was diagnosed with an aggressive cancer called hemangiosarcoma, and veterinarians said he only has one to three months more to live. However, that has not stopped Bosco from doing what he loves.

“Anyone that knows Bosco knows he’s a working dog through and through,” said Portage fire Lt. Jeremy Himan, Bosco's human partner. “His drive is remarkable, and he wouldn’t rather do anything else.”

From 1 to 3 p.m. Sunday, the Fire Department is hosting "A Salute to Bosco" at Woodland Park Oakwood Hall at 2100 Willowcreek Road in Portage. Firefighters are asking the public to come say hello to Bosco and Himan.

A few weeks ago, Bosco suddenly became sick, Portage Fire Chief Tim Sosby said. He was rushed to the vet, where an ultrasound showed a large tumor wrapped around his spleen. Though the tumor was successful removed, it was found to be cancerous.

While Bosco is recovering well from the surgery, veterinarians said dogs with the same type of cancer normally die within 85 days, Sosby said. The cancer cells in Bosco's blood stream eventually will settle in his lungs, heart and brain, veterinarians told Bosco's family. There is no cure, and treatment does not increase survival time by very long.

Until Bosco shows signs of illness, it would be best if firefighters kept Bosco on his regular routines as long as he is healthy and able, veterinarians said.

Bosco is a fire investigation dog who has worked countless fire scenes in his nine years with the Portage Fire Department. He is trained to sniff out certain accelerants that can't be detected by humans, and he has helped authorities make numerous arson convictions, Sosby said.

Bosco began his life as a homeless dog at an animal shelter, where he was rescued by the New York Fire Academy more than a decade ago.

Ten years ago, Bosco and Himan graduated from New York State Fire Academy. Together, the two have worked on several fire investigations throughout Northwest Indiana.

Sosby described Bosco as a happy, playful pooch who takes his work seriously.

“When it is time for him to work, he is all business, no messing around,” Sosby said. “It is truly amazing to watch. He is very well-trained at what he does.”

The Sunday event is free, and firefighters are welcoming attendees to bring dog food, blankets and toys for local animal shelters.

Pets of the week: Meet Oscar

More in This week in local crime news: Missing Portage woman shot during robbery; three juveniles, one 15, suspected in killing (30 of 46)

Child rescued by friends, bystanders after falling through icy pond in Crown Point