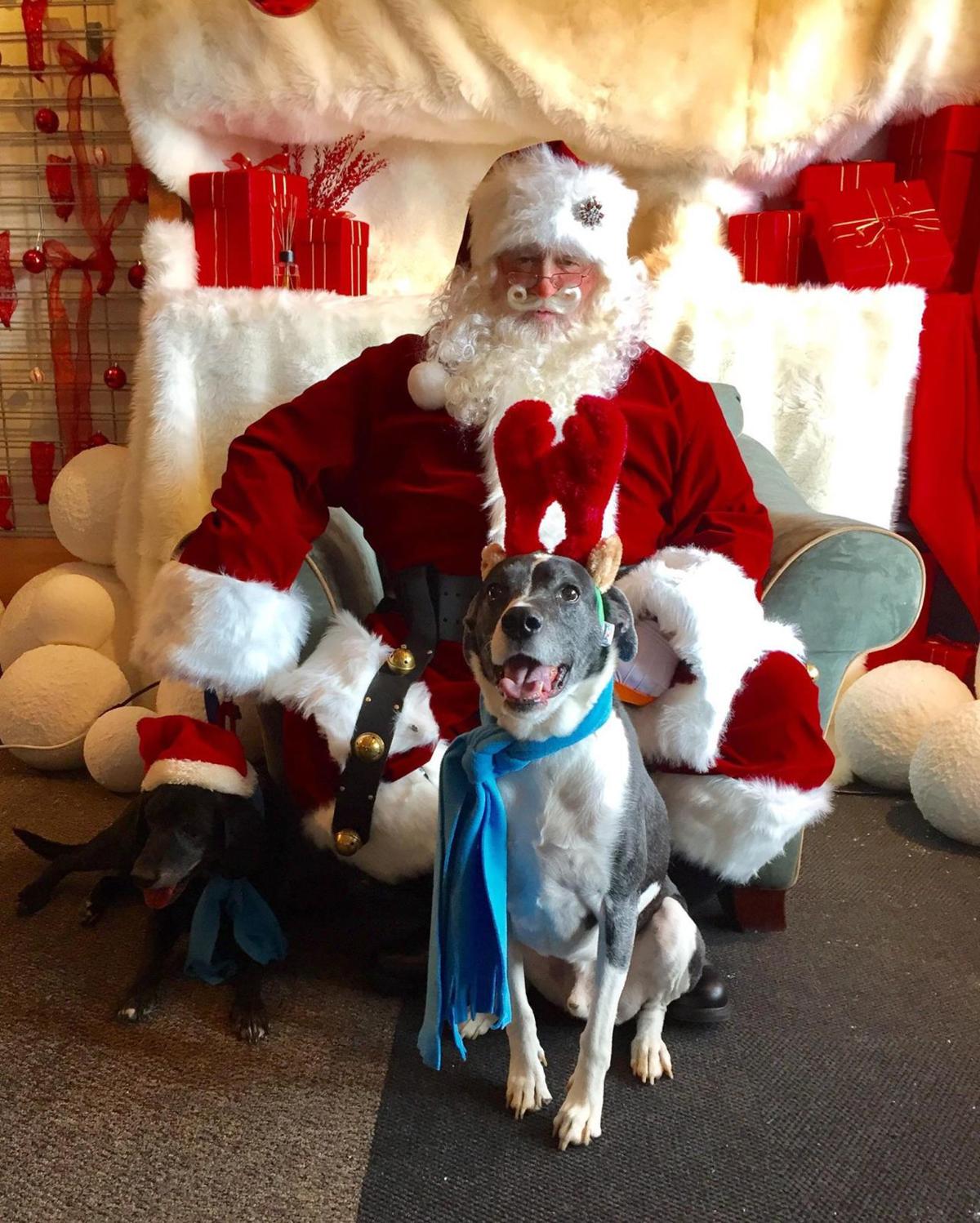 Sam, the small black dog on the left, and Cosmo take a recent photo with Santa. The 10-year-old dogs' previous owner had sought to euthanize them because of life changes, but a local veterinarian refused the request. The dogs now have a new place to call home. 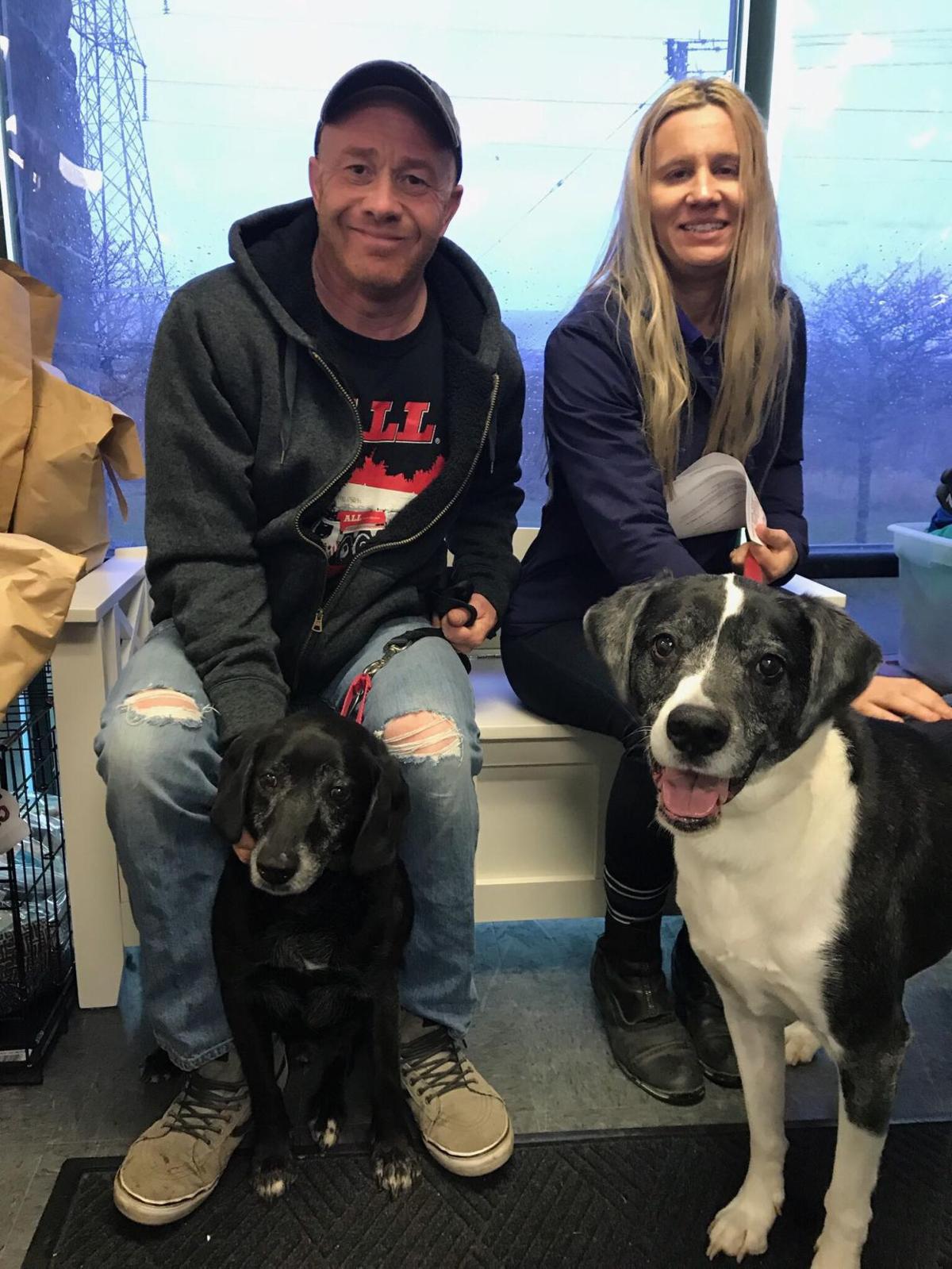 Sam, the small black dog on the left, and Cosmo take a recent photo with Santa. The 10-year-old dogs' previous owner had sought to euthanize them because of life changes, but a local veterinarian refused the request. The dogs now have a new place to call home.

When Sam and Cosmo were taken to a veterinarian's office by their owner of 10 years, the two dogs had no idea how close they came to never coming back out.

The furry companions were taken to a vet's office in Portage, where the owner sought to have the pair euthanized. The veterinarian refused the request because the dogs were healthy and friendly.

“They were heartbroken when we got them,” said Penny Emerson, president of Begin Again Rescue Co. in Valparaiso. “We had to make them special food to get them to eat. Eventually though, we got them to perk up.”

Emerson described Sam, a pointer, and Cosmo, a Lab mix, as two playful, friendly and lively dogs, so why would anyone want to put them down?

“The owner got a divorce and was moving in with his new girlfriend, who said she was allergic,” Emerson said. “Apparently there was a change in his life plans, and they weren't a part of that. It was really sad.

“He wasn't taking them back that day. He could have left them on the side of the road, who knows,” Emerson said. “There are some vets who would've put them down.”

"Convenience euthanasia,” when owners have healthy pets euthanized for personal or convenience reasons, is an ugly reality many veterinarians deal with. Like the veterinarian who saved Sam and Cosmo, many intervene on behalf of the animal.

"Convenience euthanasia used to be just an expectation and 'part of the job' as a veterinarian," said Dr. Matt Cantrell, a veterinarian who is a member of the Indiana Veterinary Medical Association. "Thankfully, in many, many places this is not something that is seen much anymore. But it is still something that pretty much every veterinarian will be faced with during their careers in general practice."

Reasons owners have given for “convenience euthanasia” includes moving, getting new furniture, shedding, divorce, job loss, damage to the home or the owners decided they didn't feel like being a pet owner anymore when faced with the responsibilities an animal comes with.

Cantrell said because pets are seen more as family members than property these days, the practice has decreased.

"The scenarios are changing," Cantrell said. "It used to be fairly common that someone could walk in and ask their vet to euthanize a pet because a family was moving, or a child wasn't caring for the pet like they promised they would or various other preventable 'problems.' Now, I think what I see more of, rather than outright ridiculous scenarios, are more gray-area scenarios where a family is struggling with behavioral issues like aggressiveness, inappropriate potty habits, etc. Still preventable and curable problems, but certainly a higher level than, 'Oh we're moving, and we just don't want to take him with us.'"

When veterinarians are faced with a client asking them to euthanize a pet who is healthy, an ethical struggle typically ensues. The veterinary oath, Cantrell said, is "above all, do no harm."

"It is a difficult situation to be in when we are serving the person in front of us, but they are requesting, perhaps demanding, that we do something we feel is against our oath," Cantrell said. "None of us want to end a pet's life unless it is to prevent suffering. We also truly do want to serve the client in front of us, taking care of their needs. So a convenience euthanasia request creates a difficult dilemma in which the veterinary team has a no-win situation."

In the case of Sam and Cosmo, after the veterinarian refused to put them down, the two were transported to  the care of Begin Again Rescue Co. in Valparaiso in June and then were later taken to Peoples Animal Welfare Society in Tinley Park.

"I, for one, and many many other veterinarians, do now feel comfortable telling people that we will not perform a euthanasia procedure without appropriate justification," Cantrell said. "Still, convenience euthanasia requests can contribute to 'compassion fatigue' in veterinary professionals, a very real mental health concern."

Planning for a pet

Cantrell said more often than not, finances play a role in pet owners' decisions, which is why having budgeting plans for animal care is important.

"Having money set aside, or knowing where money will come from, is hugely beneficial when facing a fixable problem that requires veterinary or training services," Cantrell said. "I also encourage people to think about obtaining pet insurance, for those emergencies or more challenging problems. Beyond this, if a bond is truly broken down to the point that a family feels they have no choice but to give a pet up, they should consider multiple sources for re-homing the pet. Most counties now have at least one humane society or rescue organization — oftentimes more than one."

When it comes to adopting, Emerson said senior dogs make for great companions for a number of reasons.

“They're trained, housebroken and don't chew up shoes,” Emerson said. “They're generally more easygoing. I prefer senior dogs myself. Puppies are a lot of work.”

In the case of Sam and Cosmo, after their story got out, a couple adopted the duo so they could spend Christmas and the rest of their dog years in a loving home.

The duo's adopters, Eric and Tiffany Dybas, of Lockport, Illinois, have reported the two dogs are making themselves at home and enjoying their new lives.

“(Eric) called me and thanked us for everything and told me they'll come for a visit,” Emerson said. “He said Cosmo and Sam sleep in the bed with them and have free rein of the house and a nice yard, so they got a happy ending.”

“(Eric) called me and thanked us for everything and told me they'll come for a visit. He said Cosmo and Sam sleep in the bed with them and have free rein of the house and a nice yard, so they got a happy ending.”  — Penny Emerson, president of Begin Again Rescue Co. in Valparaiso

A cat came close to cashing in its nine lives Christmas Eve after falling into an icy lake, but a Wabash College wrestler dived in to rescue it.

HAMMOND — When two teens went out for a bike ride along Wolf Lake in Hammond, they had no idea they would end the day as lifesavers.

Tofu, Bruce, Jewels, Rachel and Jake easily could have ended up as someone's meal, but instead the dogs are beginning new lives in Northwest Indiana.

Whoooo's here? All sorts of owls and other critters take refuge at Humane Indiana Wildlife

VALPARAISO — Owlfred stared — if an owl can stare — as his caretakers opened the door to his room.