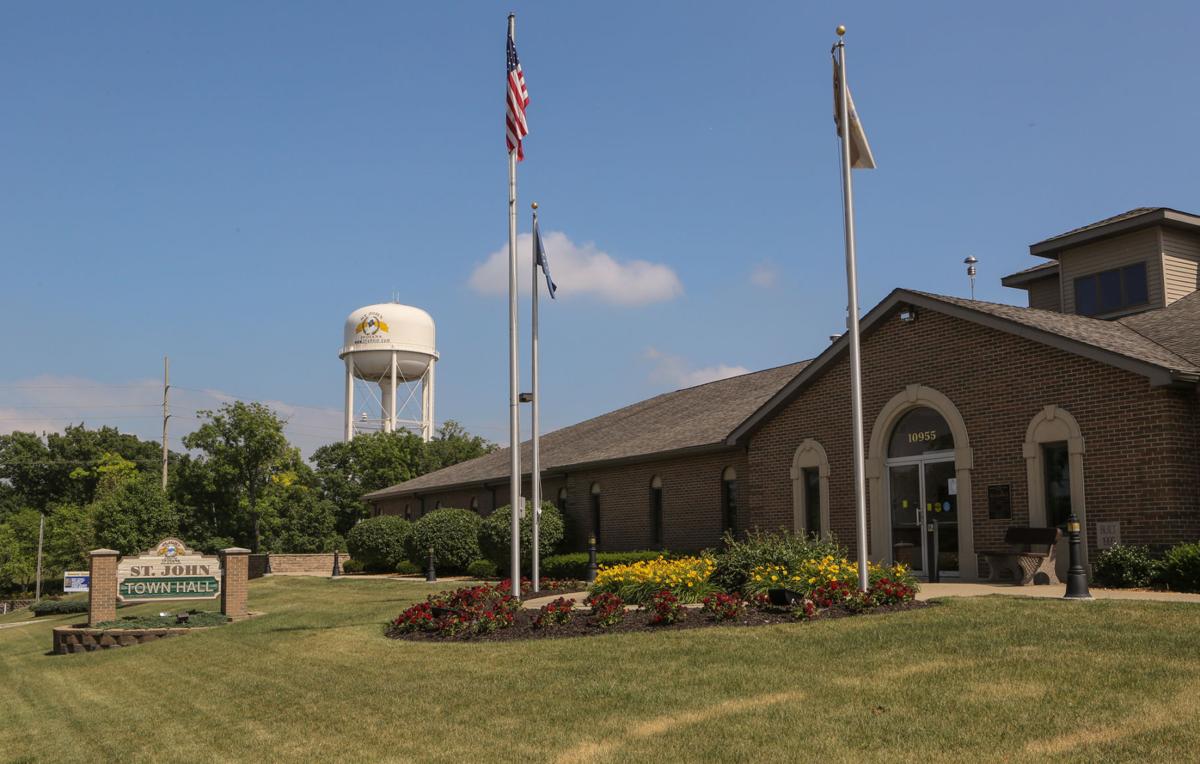 Adrian Bugariu, at the lectern, talks during a St. John Town Council meeting on Wednesday. Bugariu was later escorted from the meeting by a police officer for his behavior.

ST. JOHN — Before the start of two town meetings Wednesday evening, council members had to step in to break up a verbal argument in the crowd, which eventually led to a man being escorted from the meeting room.

Before the St. John Redevelopment Commission meeting began, Adrian Bugariu, seated in the front row, turned around and pointed his finger at the wife of Michael Fryzel, a former St. John police commander.

Then, Bugariu called Fryzel — who is facing charges of sexual battery and ghost payrolling — a criminal.

"Everyone can stop, you're here to see a meeting," Swets said to the crowd.

Swets then asked Bugariu to be respectful.

"I'm respectful, but that guy is a criminal," Bugariu said.

"That's not being respectful, at all," Swets replied.

"(The) Fryzel family doesn't own this town," Bugariu rebutted.

Swets eventually asked Bugariu to be quiet, and also reminded Bugariu comments during meetings should be based on the meeting agenda.

Bugariu then turned around again.

"Do I need to call somebody to be over here?" Swets asked.

"You are on a warning. They're facing forward, you're not. You're pointing back. They're not. You have to be respectful."

"Don't shut me up because I am an honest man," Bugariu replied.

Some in attendance called for Bugariu to be removed from the meeting, and a St. John police officer was eventually called to Town Hall.

As the room began to quiet down, Bugariu again turned around.

Michael Schilling, a councilman and the chair of the Redevelopment Commission, asked Bugariu to leave if he wasn't going to behave.

Swets again asked Bugariu to look forward and stop looking back and pointing.

When it came time for public comment during the Town Council meeting, Bugariu, who since had a police officer sit next to him, said: "I never committed a crime, and I never would commit a  crime. But (Clerk-Treasurer) Beth Hernandez has to go, thank you."

Swets then said, "Will you please leave?"

Bugariu was then escorted out of the meeting by a St. John police officer.

Hernandez said she has filed several police reports against Bugariu.

"Adrian has a long history of making unfounded accusations and outlandish statements about our police officers, town employees and elected officials," Hernandez wrote in an email. "When Adrian appears on Town property, it quite often requires police presence and usually results in him leaving with a police escort."

"There aren’t too many people that have the ability to shake me up, but Adrian Bugariu is one of them."

Bugariu was escorted out of a Feb. 28, 2019, Town Council meeting for his remarks and disregarding demands to end his comments.

During that same meeting, residents voiced their concerns over the town's Civility Statement, which includes Ordinance 1623.

The ordinance, adopted in 2016, states, in part, “any individual who makes personal, impertinent or slanderous remarks, or who becomes boisterous or delays or interrupts the proceedings or peace of the meeting … who refuse to obey the orders of the council … shall be barred from further participation in the proceedings.”

Although the Civility Statement was not discussed during Wednesday evening's meetings, Swets said it likely will be added to future meeting agendas.

"I wish it's something that didn't happen and didn't have to happen," Swets said on Thursday. "The last thing I want to do is throw somebody out of a meeting, and I'm a believer that everyone has a right to expressions and their words can be or their ideas can be respected. But, what he was doing was just being disrespectful."

Swets added Bugariu was asked to leave because of his overall behavior during the meeting.

Town attorney David Westland later told The Times while everyone has the right to observe and record public meetings, municipalities don't have to allow public comment during those meetings, per statute.

Though he was asked to leave, Bugariu could still tune into the meetings via the town's YouTube channel, Westland added.

"His rights, statutory and constitutional, were preserved despite the fact that he tried to incite a negative reaction," Westland said.

WH 'refining plans for all scenarios' in Ukraine

WH 'refining plans for all scenarios' in Ukraine

WH on SCOTUS and race in college admissions case

WH on SCOTUS and race in college admissions case

A couple items of town business are on hold while two boards consider additional information.

Adrian Bugariu, 79, is facing a level 6 felony for battery against a public official, and misdemeanor counts of operating a vehicle while intoxicated, resisting law enforcement, criminal mischief and reckless driving.

Adrian Bugariu, at the lectern, talks during a St. John Town Council meeting on Wednesday. Bugariu was later escorted from the meeting by a police officer for his behavior.