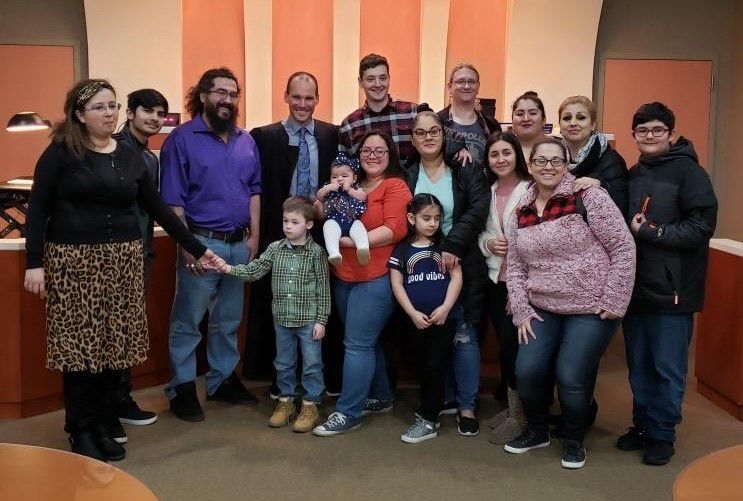 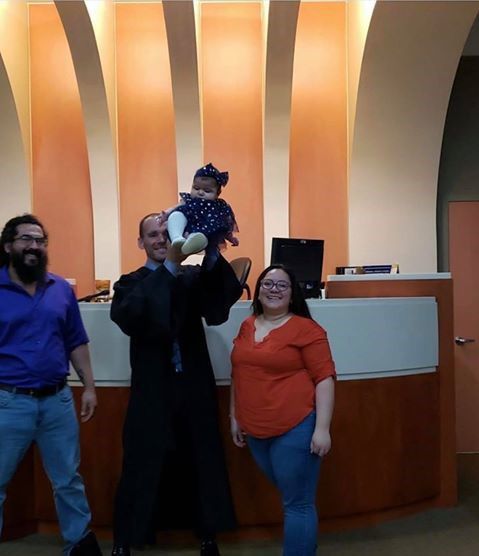 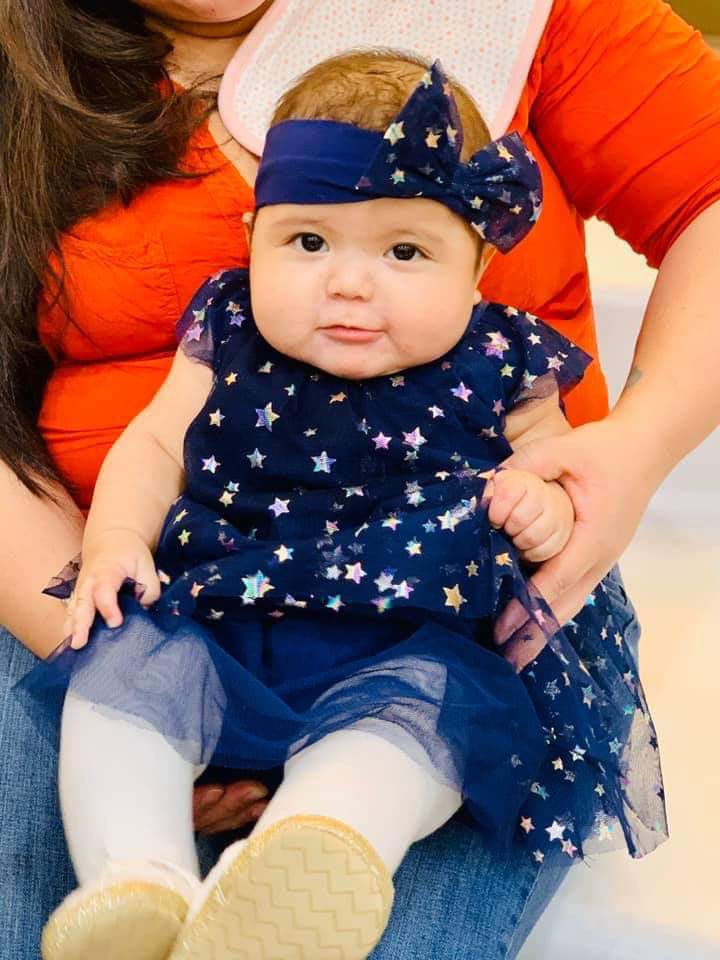 Grace Elizabeth Melgoza is the first baby surrendered in the Safe Haven Baby Box in Hammond. 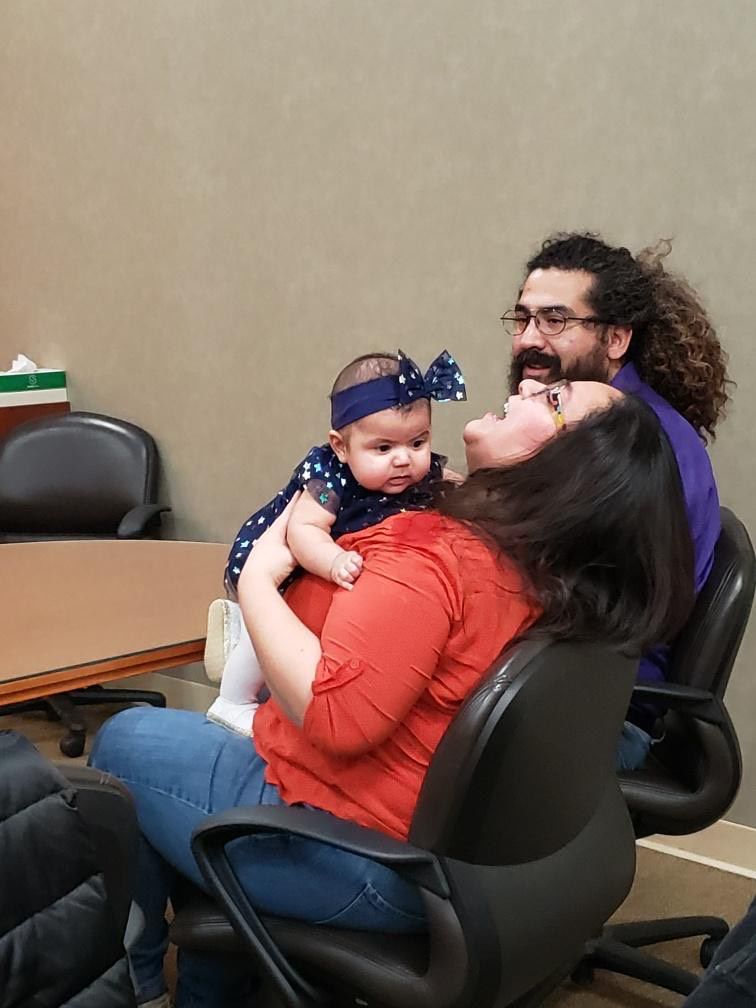 HAMMOND — The story of the first baby surrendered in a Lake County baby box changed the lives of one Hammond couple forever.

On Sept. 10, a newborn was placed in Franciscan Health's Safe Haven Baby Box in Hammond.

On Wednesday, the baby girl was officially adopted and named Grace Elizabeth Melgoza.

“We chose Grace because either way we look at it, she’s our saving grace and in adopting her, we are saving Grace,” Jennifer Melgoza, the baby’s new mother, said.

Mario and Jennifer Melgoza, of Hammond, have been trying to adopt since September 2018, working through the “highs and lows” of the process. They originally wanted to adopt an older child. But when they saw an email about a baby needing a forever home, they saw it as a sign of hope.

After interviewing with adoption case workers, they received a call that would change their lives forever saying they were chosen as the adoptive family. On Oct. 7, the baby girl came home with the Melgoza family.

“It felt like a weight lifted off of my shoulders,” Jennifer Melgoza said. “When the judge said, ‘I grant you the petition. The answer is yes,’ all I could think is, ‘She’s mine. She’s ours.’ I held her so tight.”

Jennifer Melgoza said throughout the process, everything seemed “meant to be.”

After the couple decided on the baby’s name, they found out the courts gave her the temporary name of Grace, too.

From the day the news broke of the first newborn being surrendered in the Hammond baby box, Jennifer Melgoza felt a spark light in her heart.

“The day the story broke across the internet, I shared it a couple times on Facebook because to me, it was a beautiful thing,” Jennifer Melgoza said. “That her mom decided to do the best thing for her baby — I thought, this is awesome. This woman decided to give her baby a chance for a better life.”

That night Mario and Jennifer Melgoza talked about the news, wondering if this might be the miracle they have been waiting for.

“Maybe the reason we have had such a hard time finding the right child to adopt is because maybe she’s meant to be ours all along,” Jennifer Melgoza said.

The couple were high school sweethearts who reconnected a decade after graduating. The Melgozas, who have been together for eight years, knew they wanted to begin a family together from the start. However in 2016, doctors told Jennifer Melgoza she was unable to have children, leading to the couple’s decision to adopt.

Now Mario Melgoza said he finally has the chance to be a father.

“We are both extremely excited to have Grace be the final piece to the puzzle of our happy life,” Mario Melgoza said. “In 2018 after my mother passed away, I lost a piece of my heart. Then when Grace came into our life, she helped fill that void.”

Grace’s journey began in September when, as soon as the infant’s mother opened the baby box’s door, Monica Kelsey, CEO and founder of Safe Haven Baby Boxes, was notified. Within 90 seconds, the newborn was retrieved from the box and the hospital staff tended to the baby girl. She was then released from Franciscan Health under the care of the Department of Child Services to find an adoptive family.

The mother contacted Safe Haven after surrendering the baby girl and Kelsey said the organization has since provided the woman with support.

“We are still in contact with the mom and have given her some needed resources,” Kelsey said. “We love these moms and we are there for them for as long as they need us to be, every step of the way.”

Upon hearing the news of the adoption, Kelsey was overjoyed.

“I’m excited the adoption has gone through so quickly,” Kelsey said. “I was abandoned as an infant and this is what drives my mission and ministry.”

Indiana now has nine baby boxes; the one installed in Hammond in August was Lake County's first.

In less than a month after the Hammond baby box was installed, it saw its first newborn. Grace was the third baby to be surrendered to an Indiana Safe Haven Baby Box within the past two years.

The National Safe Haven Crisis line is 1-866-99BABY1 and more information can be found at shbb.org/.

A teen mother and her infant son are safe after being reported missing and in danger.

Come March, the 17-year-old will spend four days on an all-expenses paid trip to Walt Disney World, where she will attend immersive career workshops at the Disney Dreamers Academy.

Grace Elizabeth Melgoza is the first baby surrendered in the Safe Haven Baby Box in Hammond.