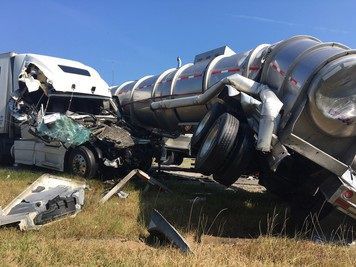 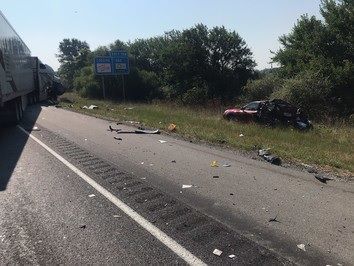 Indiana State Police closed down the southbound lanes of I-65 near the 159 mile marker in Clinton County after a six-vehicle, fatal crash.

Indiana State Police closed down the southbound lanes of I-65 near the 159 mile marker in Clinton County after a six-vehicle, fatal crash.

CLINTON COUNTY — A six-vehicle crash on Interstate 65 Thursday claimed the life of one and injured three, including a Michigan City man who had to be airlifted from the scene of the crash.

At 9:15 a.m., police responded to the crash on southbound I-65 near the 159 mile marker in Clinton County, according to Indiana State Police. Four semitrailers, a passenger car and a van collided, police said.

In the midst of a traffic backup due to a previous crash, the driver of a white Volvo pulling a refrigerated box trailer failed to see traffic had slowed down, claiming he was searching for a bottle on the floor of his truck, police said.

The Volvo rear ended a maroon Subaru Legacy, driven by a 54-year-old Michigan man, projecting them into a ditch. The Volvo continued forward and then rear-ended a black Kenworth pulling a loaded tanker. The impact sent the Kenworth into the back of a white Ford Transit.

The Transit became “pancaked” between a second tanker and the Kentworth, killing 81-year-old Ira Brockman, of Kentucky, who was driving the Transit, police said. Brockman as pronounced dead at the scene.

The Michigan City man suffered serious injuries was flown by helicopter to Methodist Hospital in Indianapolis, police said. Two other people went to the hospital for non-life-threatening injuries.

A sixth vehicle pulling a flatbread trailer also had minor damage from the wreck. The Volvo, Subaru and the Kenworth pulling a tanker were all destroyed, police said.

The investigation in ongoing and the section of interstate has been closed for crash reconstruction and to clean the area of debris. A report will be submitted to the Clinton County prosecutor for potential charges.

LAKE STATION — A motorcyclist was airlifted after striking a barricade in a construction zone Tuesday night, police said.