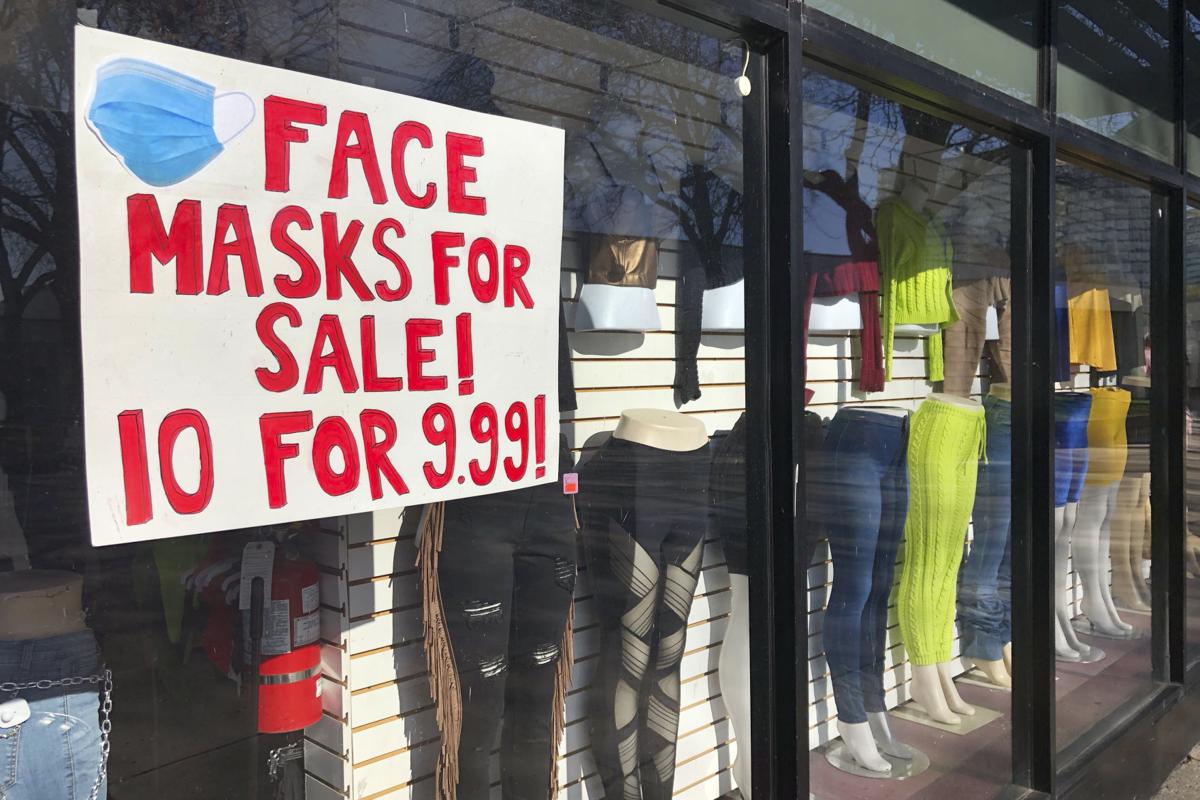 A women's boutique clothing store in the Bronzeville neighborhood of Chicago, advertises the selling of masks Sunday. 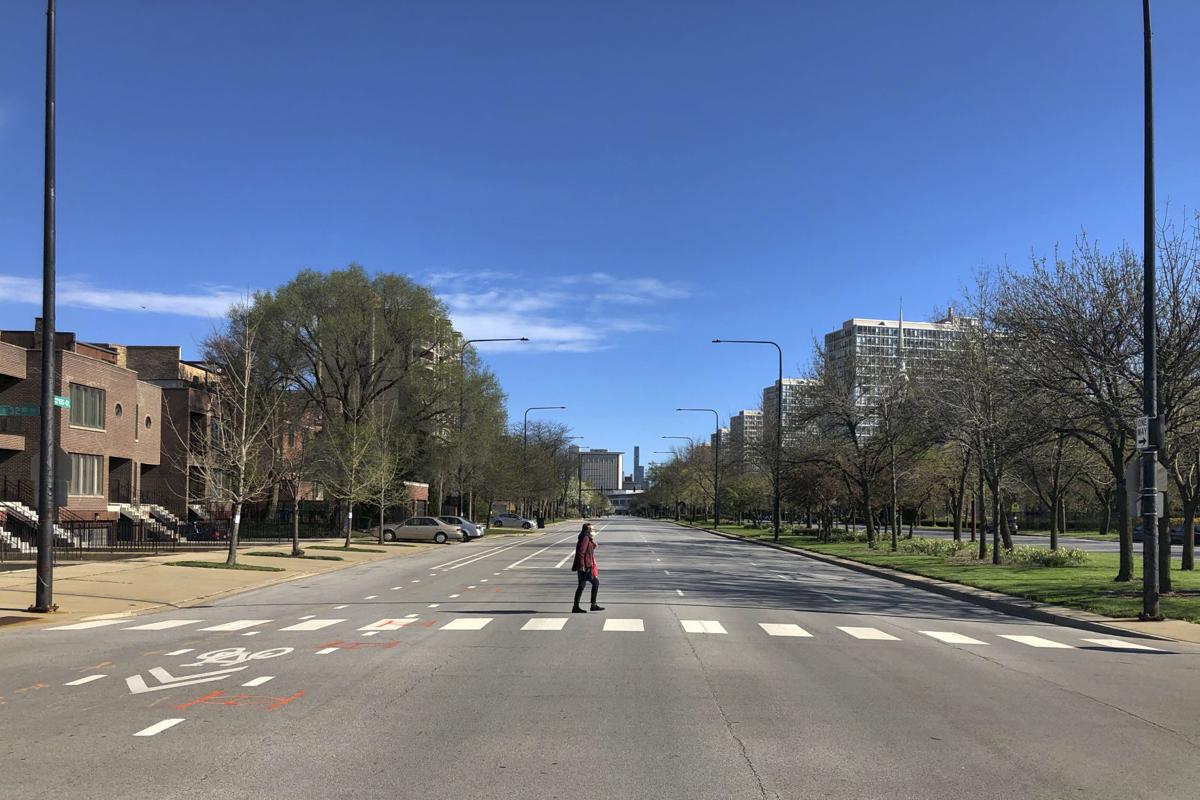 A woman wearing a protective mask walks across the usually busy Dr. Martin Luther King Drive in the Bronzeville neighborhood of Chicago, Sunday, May 3.

Gov. J.B. Pritzker’s extension of the order, which took effect Friday and lifts May 30, allows for worship limited to groups of 10, along with other social distancing measures.

Roughly 100 people attended The Beloved Church in Lena, according to WREX-TV, which was denied entrance but interviewed attendees and neighbors who counted congregants. The community of roughly 2,800 people is 130 miles northwest of Chicago.

Officials with the evangelical church sued in federal court arguing Pritzker's order violates the First Amendment right to free religious practice. However, U.S. District Judge John Z. Lee on Sunday rejected the church's request for a temporary restraining order because such large gatherings could “magnify the risk of contagion even when participants practice preventative measures.”

Worshippers stood with their families, but stayed six feet away from others and were provided hand sanitizer and masks, according to Thomas Ciesielka, a spokesman for the Thomas More Society, which represents the church in court.

Pritzker said Sunday that the order is temporary and faith leaders should make keeping parishioners safe a top priority.

Health officials announced 2,994 new cases of COVID-19 Sunday, including 63 deaths. Overall, there have been 61,499 cases and 2,618 deaths. Pritzker said a record 19,417 coronavirus tests were conducted recorded over the past 24 hours.

For most people, the new coronavirus causes mild or moderate symptoms, such as fever and cough that clear up in two to three weeks. For some, especially older adults and people with existing health problems, it can cause more severe illness, including pneumonia.

Police stand ready to help those struggling with addiction

For those struggling with addiction, the added stress and lack of in-person recovery support during the coronavirus pandemic can lead to relapses, said Erica Rios, the Griffith Police Department’s social worker.

The Republican State Committee has adopted temporary rules to ensure convention delegates elected June 2 decide the party's nominees for lieutenant governor and attorney general — no matter the form of the convention.

A light breeze and sunny skies welcomed shoppers to the opening day of the St. John farmers market Sunday. However, some restrictions were in place due to the COVID-19 pandemic.

Lake County topped 2,000 coronavirus cases Sunday, according to statistics provided by the Indiana State Department of Health, the Centers for Disease Control and Prevention and private laboratories.

"Voters residing within the Hanover Community School Corp. must show their support in the upcoming June 2 primary election for a funding referendum that the top-performing, but financially struggling, school district seeks."

Region drivers keep on trucking through coronavirus crisis, keeping groceries on the shelves

While much of the Region and America stay home, truck drivers have kept the Calumet Region and country going by making vital deliveries.

After 20 days on a ventilator battling COVID-19, her lungs infected and her chance of survival slim, she suddenly started to get better.

Katie and Mike DeYoung may have not gotten the wedding they originally planned, but it was a memory they will never forget.

A convoy of dozens of vehicles drove down Spring Street in Highland in front of the home of Jesse and Priscilla Jones, a couple celebrating 72 years of being in love.

The School City of Hammond celebrates its School Lunch Heroes every year. This year, food services staff were surprised with chalk art, posters and cheers all from a distance.

Illinois will allow small, safe worship services during the coronavirus pandemic, according to a modified extension of Gov. Pritzker's stay-at-home order that took effect Friday.

Budget cuts could come in the form of elimination of vacant positions and reduction in force.

Indiana gaming workers had an online rally Friday to call for more health and safety measures before the casinos reopen.

The DOJ confirmed having heard reports of landlords trying to exploit the coronavirus crisis to sexually harass tenants.

Gov. Holcomb has crafted a schedule for reopening Indiana's economy that potentially culminates in everything returning to "normal" by July 4.

Though Gov. Holcomb is expected to loosen stay-at-home restrictions, Michigan City plans to keep its local stay-at-home order in place.

Total deaths included 92 in Lake County, eight in Porter County, seven in LaPorte County, six in Newton County and one in Jasper County.

Mother's Day this year means getting creative from afar

Mother's Day this year is a mix of love and extra imagination as families do without their usual brunches and huggy meet-ups.

The legal sale of marijuana during Illinois’ first full month of lockdown due to the coronavirus surpassed sales in two previous months, state officials announced Monday.

Gov. Pritzker outlined a plan for re-opening the state as the threat from COVID-19 subsides.

A women's boutique clothing store in the Bronzeville neighborhood of Chicago, advertises the selling of masks Sunday.

A woman wearing a protective mask walks across the usually busy Dr. Martin Luther King Drive in the Bronzeville neighborhood of Chicago, Sunday, May 3.