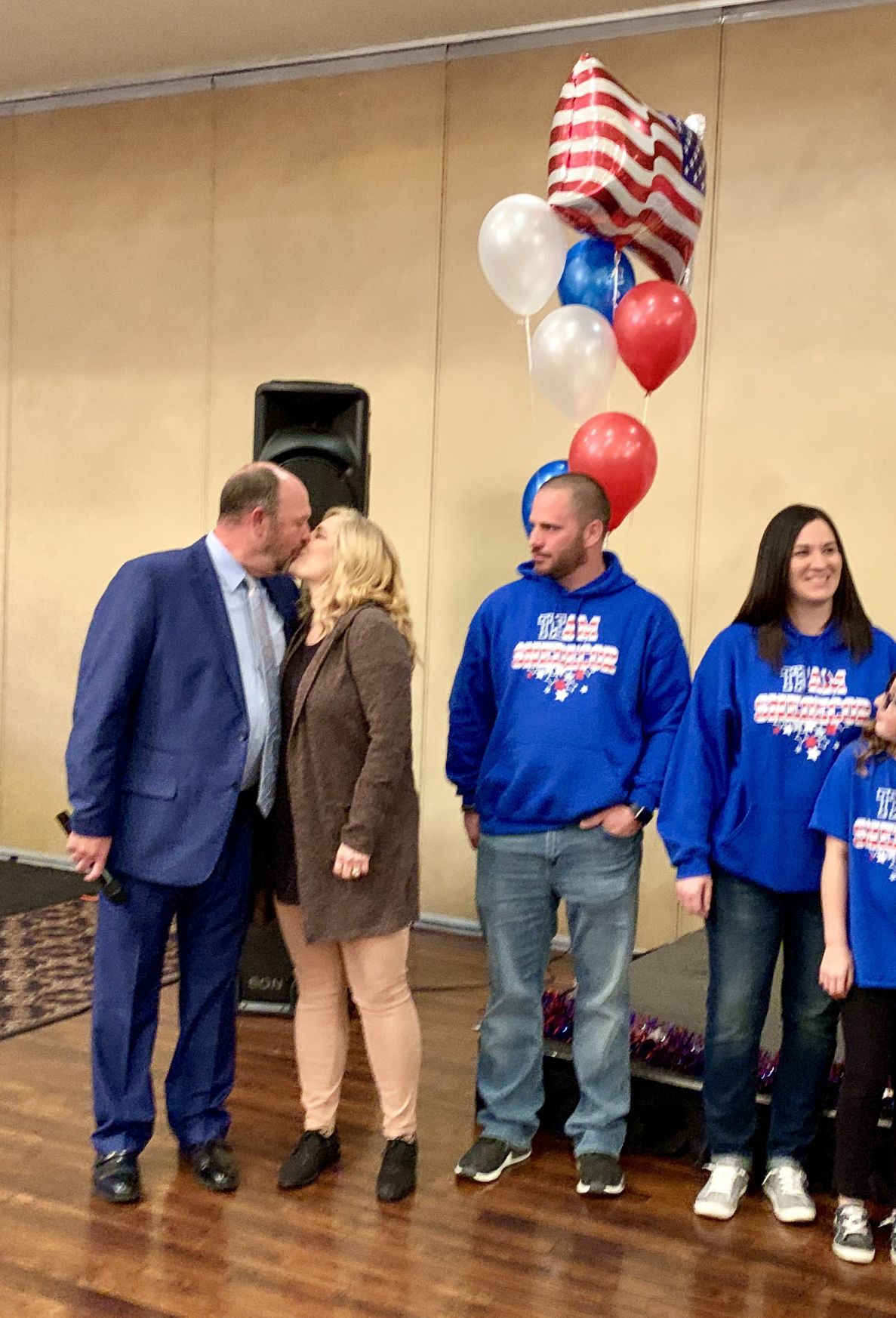 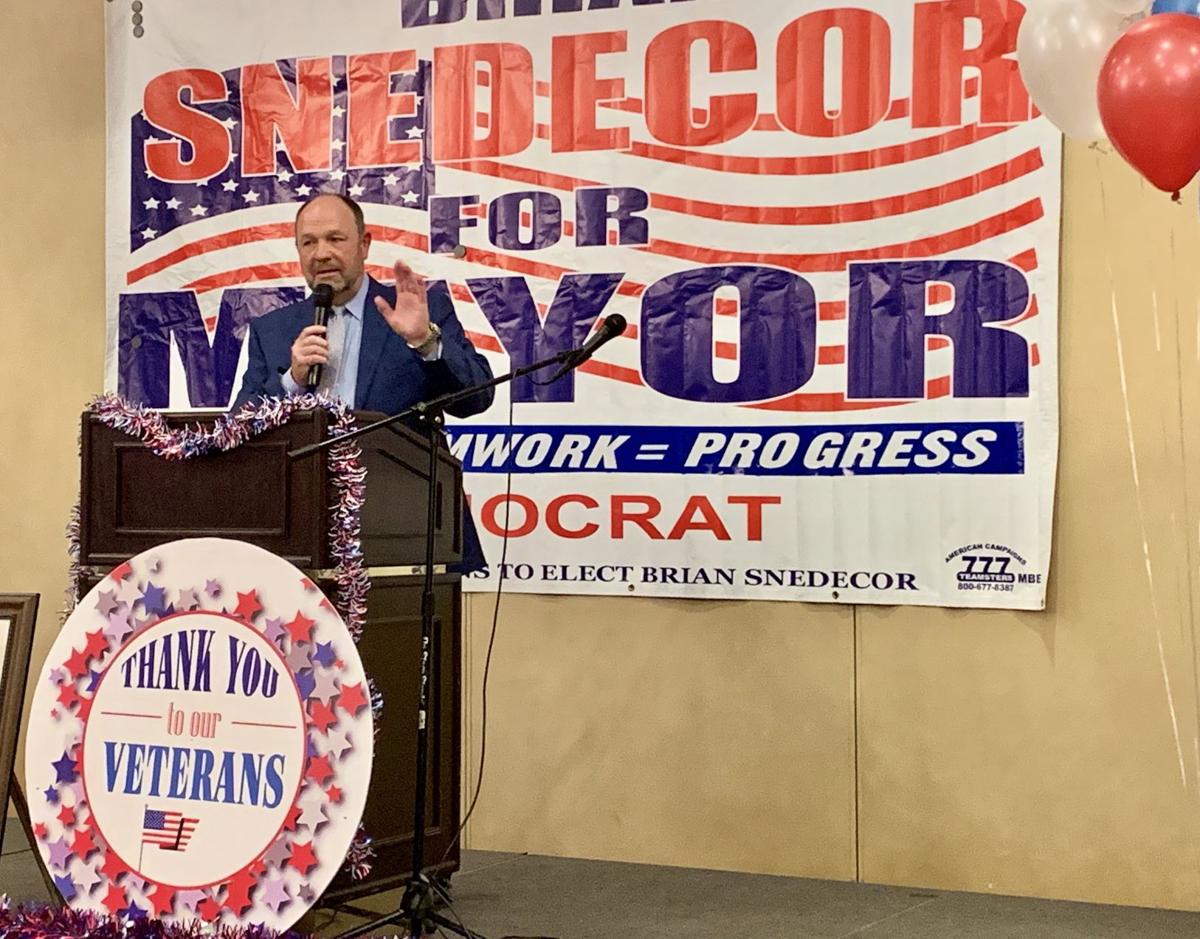 A crowd of friends and supporters, already at the venue, stood and applauded Snedecor's sizeable win over fellow Democrat Jerry Herzog, a Hobart Town Councilman.

"We're here to celebrate," Snedecor said to his supporters.

The song, "Celebration," by Kool & the Gang, was played while Snedecor, his wife, Janet, and their family stood in front of a red, white and blue banner with the message: Brian Snedecor for mayor.

Snedecor, 60, commented on the long day and the miserable weather.

"We knew eventually we were getting to the victory line," Snedecor said.

Snedecor said his opponent, Herzog, called him earlier in the evening to congratulate him.

"We will work together," Snedecor said.

Snedecor, if he wins in the general election, will begin serving his fourth term in 2020.

No Republicans filed in the primary election.

Snedecor gave special thanks to his family, including his wife and children.

"I have to give special thanks to my wife, Janet, for putting up with me for the last five months," Snedecor said.

Snedecor said he was a little hesitant to seek a fourth term, but was encouraged by his constituents to do so.

He was humbled and flattered by the support, he said.

Long-time Hobart resident, Henry Aquilera, was one of supporters who worked on Snedecor's campaign starting three months ago after he looked at the mayor's accomplishments and good record.

"I looked around and said this isn't a bad town. This guy ain't bad," Aquilera said.

Snedecor has served the city of Hobart for most of his life working as a Hobart police officer for 27 years, serving more than four years as police chief.

He said he believes this has been his strongest races so far.

"We never ran out of signs so quickly. This is the strongest I've been going up for election. It's been an amazing run," Snedecor said.

His priorities include revitalizing the downtown area, continuing infrastructure improvements throughout the city, creating jobs, expanding the park system and providing equipment upgrades for police and fire.

He wants to turn Hillman Park into a sports complex to draw economic activity to the west side, complete the downtown streetscape and increase the housing stock to meet growing demands.

"We're starting to see the fruits of our labor," Snedecor said.

Snedecor points to some 400 homes being built on the north end as part of Cressmoor Park development.

"And there is some higher end housing that is important," Snedecor said. Hobart also recently attracted Wynright Corp., which is building a 320,400 square-foot manufacturing facility in Northwinds Crossings Business Park.

The business will employ some 500 people, Snedecor said.

Herzog pushed on the theme in his campaign that it's time for new leadership and fresh ideas.

Herzog, 59, has been the District 1 City Councilman for 12 years. That district encompasses portions of the Ross Township area that includes the U.S. 30 retail corridor.

"There has been no major residential growth in 12 years," Herzog said.

Herzog said he'd meet with developers "to find out how to sell our city."

Herzog said the most recent census indicates the population of Hobart has decreased by 1,103 people, so it's critical to find out what it would take to make people stay.

Herzog said he'd also look to add more events and activities and would consider using the Silverstone property, north of U.S. 30, for that purpose.

"We need to do more things to keep younger people here," Herzog said.

Herzog, who was in construction for 31 years, said he'd also like to clean up the neighborhoods and focus on improved infrastructure, particularly in the outskirts of the downtown.

"If we don't have the money then maybe we can get some funding from the state," Herzog said.

Herzog said he also would like to stay in better touch with constituents.

"I want to have monthly meetings in each of the districts. Let's discuss what's going on and how to handle it," Herzog said.

HOBART — Hobart Mayor Brian K. Snedecor said he was a little hesitant to seek a fourth term, but was encouraged by his constituents to do so.

Mayoral nominations on the line in four cities

Hug a tree in Israel to beat coronavirus blues

Hug a tree in Israel to beat coronavirus blues