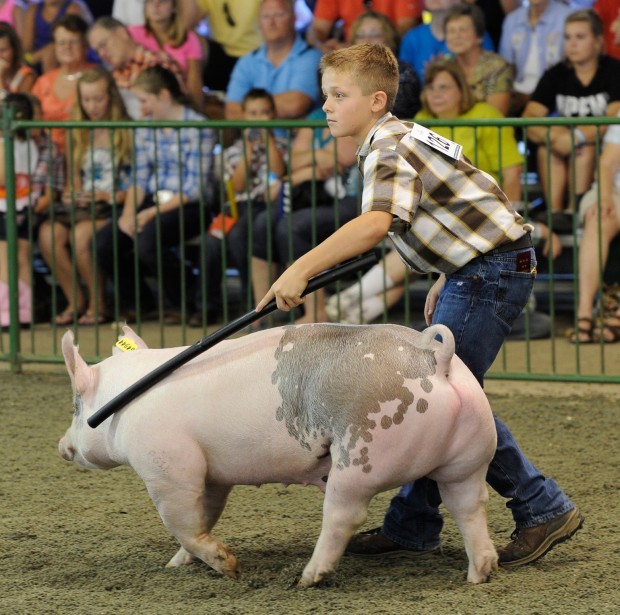 Cody Maxwell shows his pig Monday during the fifth day of the Porter County Fair. A key show point is Cody keeping his eye on the judge and keeping the pig in the middle. 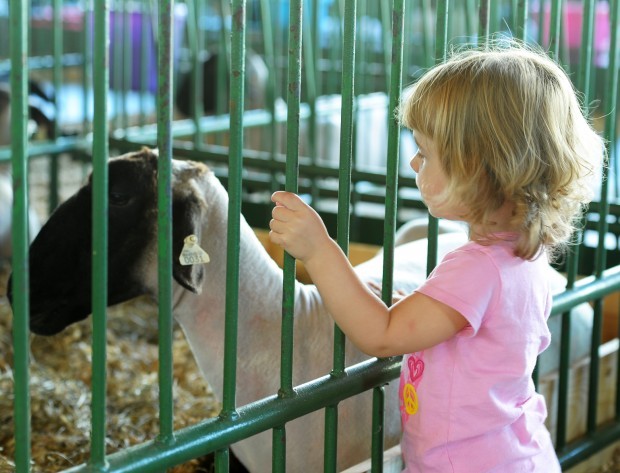 WASHINGTON TOWNSHIP | Stetson Herzog, 11, gets up at 5 a.m. every morning to do farm chores, including taking care of his pigs.

One of those pigs, Antavio, helped him win champion in beginner showmanship at the Porter County Fair 4-H Swine Show on Monday night.

In showmanship, kids in third through 12th grade are judged on how well they handle their pig in the ring. They gently prod the animal with a soft stick in front of a judge who evaluates such things as positioning, pace and ability to keep the pig moving.

"You and your pig have to work as one," judge Grant Grebner told the participants.

Herzog, of Hobart, said he'd been showing pigs for three years. He became interested in pigs after spending time on a relative's pig farm, he said.

Before taking Antavio into the ring, Herzog said he put oil on the pig to make him shiny and brushed him.

His parents, Pam and Matt, helped him learn his showmanship technique.

Beginner showmanship reserve champion Blake Owens, 11, of Kouts, said he held his stick like a pencil and tapped his pig, Joker, behind his ear.

"I just walked him nice and slow and kept him in front of the judge," he said.

The swine show also included carcass and gilt judging. In the gilt event, female swine are judged on their breeding capabilities.

Joan Grott, 4-H extension educator for Purdue University Extension Service, said most of the pigs were born in February or March. The fair is the culmination of the hard work the kids have put into taking care of the pigs the past several months, she said.

"I've seen kids walking their pigs down back roads to exercise them," Grott said. "It's amazing how much time the 4-Hers spend getting their animals ready for the fair."

The swine show continues at 8 a.m. today in the Livestock Show Arena with the market barrows event, in which male swine are judged for their meat production.

Cody Maxwell shows his pig Monday during the fifth day of the Porter County Fair. A key show point is Cody keeping his eye on the judge and keeping the pig in the middle.