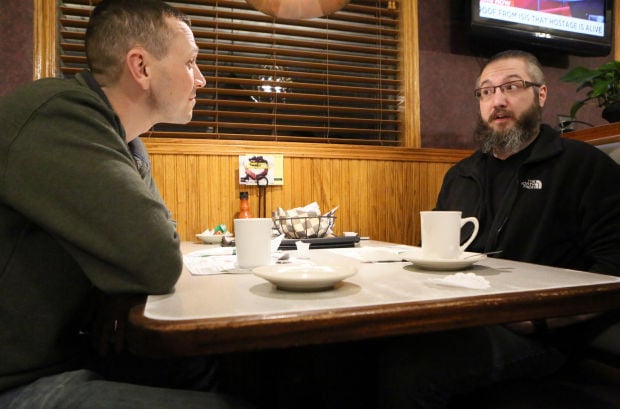 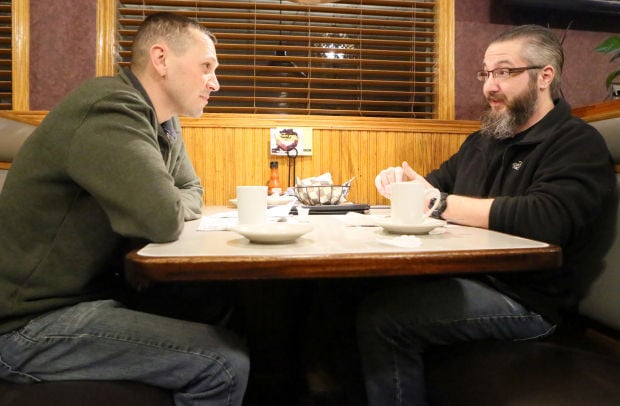 CROWN POINT | National Guard veteran Aaron Allen sat at a booth during a January evening at a nearly empty Johnnie's Round the Clock in Merrillville.

Allen, who was deployed to Afghanistan in 2009, stirred his coffee as he waited for Jason Gootee, a U.S. Navy veteran, who walked in after 5 p.m.

Though the men were about 2 miles from the Lake County Government Center, their conversation over coffee is one aspect of the county's newest problem-solving court aimed at taking a holistic approach to criminal justice.

His case was transferred to the new veterans court after his attorney, Steve Haddad, learned about his past military service.

Lake Superior Court Judge Julie Cantrell said if defendants like Allen complete the 18- to 24-month program, the criminal charges will be dismissed.

An observation of the veterans court call shows the multiple layers of volunteers and officials working to get the defendants' lives back on track.

Representatives from the U.S. Department of Veterans Affairs, who evaluate all defendants, attend the court call and chime in when questions arise about issues defendants are having.

Defendants stand in front of Cantrell with their mentor and attorney. The mentor provides updates to Cantrell on the defendant's progress.

For Allen, Gootee has become a friend not only to talk to about mundane life issues but also to keep him on track.

As of January, there were 13 participates in the veterans court. However, the January court call consisted of more than 30 defendants, many who were seeking to have their cases transferred into Cantrell's courtroom.

Once the courtroom reaches 50 participants, Cantrell said Lake Superior Court Judge Sheila Moss will take on 50 other participates as part of the veterans court.

On the other side of the government center, Senior Lake County Criminal Judge Salvador Vasquez since 2011 has operated the transitional court. That program works in three stages to gradually release offenders from prison.

Judy Love, the transitional court's coordinator, said about 55 to 60 percent of the participates have successfully completed the program.

Like the veterans court, the transitional court addresses needs regular courts don't typically delve into. For example, offenders are reconnected with family members and a volunteer attorney works with offenders to regain a driver's license.

Allen said the veterans court helped him gain a driver's license, which was crucial in maintaining his job in Valparaiso.

"I probably would have gotten in a lot more trouble," Allen said.

Vasquez is in the process of expanding his transitional court to include defendants who have served lengthy periods in Lake County Jail while charges were pending.

He said defendants will get the benefit of shortening their sentence and have convictions modified upon completion of the program.

"If we help these people out, then that's one less person who's going to commit a crime," Vasquez said. "Everyone benefits. We are doing it one person at a time."

Part of the program will include a strike team that will help families find resources to solve problems contributing to truancy.

Carter said he believes one of the main factors leading to students dropping out of school is a sense of embarrassment from not feeling smart enough. He said that feeling is directly tied to how often a child attends school.

"There's a tremendous demand for specialty courts," Pera said. "(But) court resources are not limitless."

Technology in the courts

As technology in the courtroom continues to expand, Chief Public Defender David Schneider said his office is working to arm public defenders with iPads or laptop computers "to be somewhat on a level playing field with the prosecutor's office," Schneider said.

Most deputy prosecuting attorneys in the criminal division use iPads or laptops to show the state's evidence on large television monitors during a court hearing or jury trial. Some prosecuting attorneys have used the technology to create timelines or PowerPoint presentations to lay out their case.

Pera said the Indiana Supreme Court asked the county to consider joining Odyssey, which is a public website used to track court cases in more than 50 counties across the state. He said there are still many unanswered questions left before the county makes the transition to Odyssey.

"We've been fortunate in Lake County that since 1999 we've had Courtview," Pera said. "It has served us very well."

Pera said the state is also expected to launch a pilot electronic filing program. In Lake County, there is already limited e-filing in civil cases.

Vasquez described e-filing as the future, which judges will have to confront soon.

"As judges we need to keep an open mind on e-filing," Vasquez said. "It's happening in the federal court system. This is just the way that it's going to be."

The prosecutor's office and the public defender's office are working to engage more closely with the community.

Carter said his office is planning sensitivity training for patrol officers in light of recent national incidents that have spotlighted the intersection between race relations and police departments.

The prosecutor's office is starting a new initiative that would allow deputy prosecuting attorneys to volunteer to serve as substitute teachers for a day at Lake County schools.

"We want to show the softer side of police," Carter said. "We are there to help them and help make their communities safe."

Marvin Smith, executive director of the public defender's office, said his office plans to do more public speaking events at schools to give students a better idea of the wide-range of career opportunities within the office.

"We want to make sure clients have good representation from the lower level felonies to the higher level cases," he said.

Some of the most needy youth in the region are not receiving an education they deserve, according to the official in charge of their care.

CROWN POINT | Even if their parents may groan at the idea of jury duty, a Lake County Superior Court judge spent Wednesday afternoon teaching …

CROWN POINT — After serving two tours of duty in Iraq with the U.S. Army, Reid Narjes came back home and was arrested in 2008 on suspicion of …