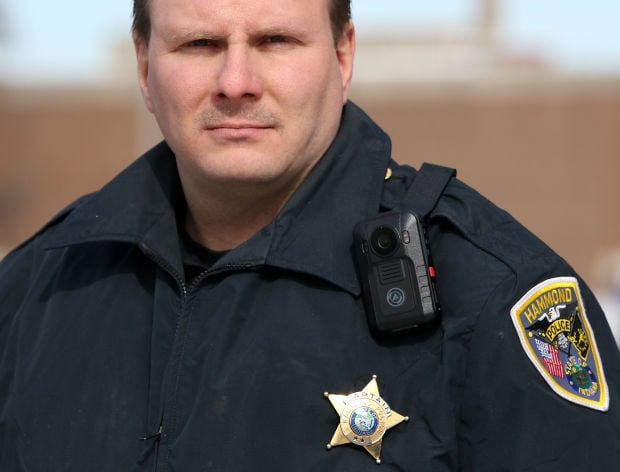 Hammond police Capt. Rudy Grasha wears a demo body camera the department is testing. The camera is among four brands the department looking at buying. 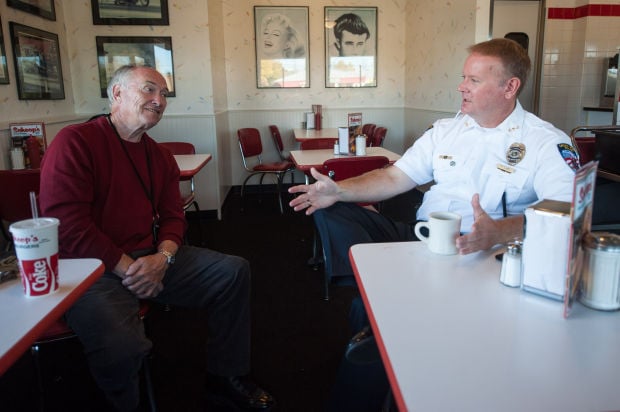 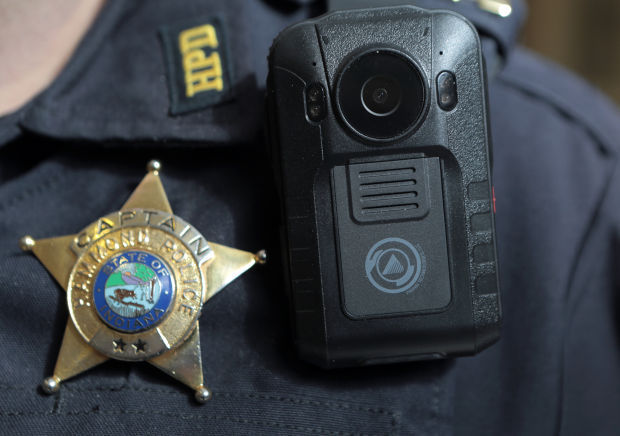 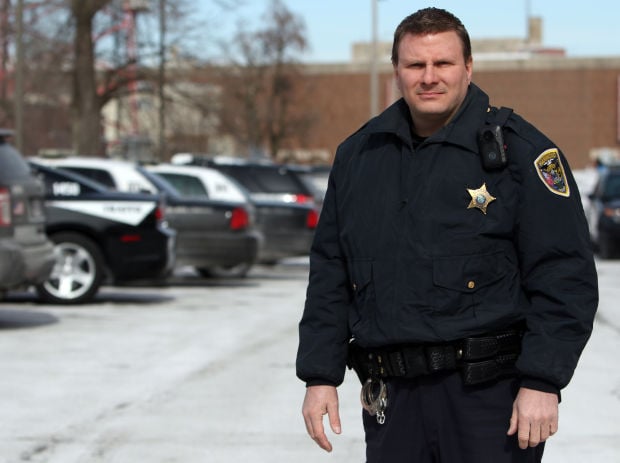 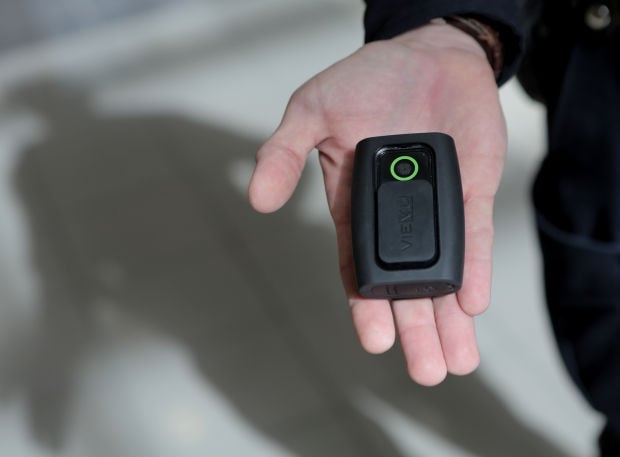 A demo body camera the Hammond Police Department is testing. The camera, made by VIEVU, is among several brands the department is considering for purchase. 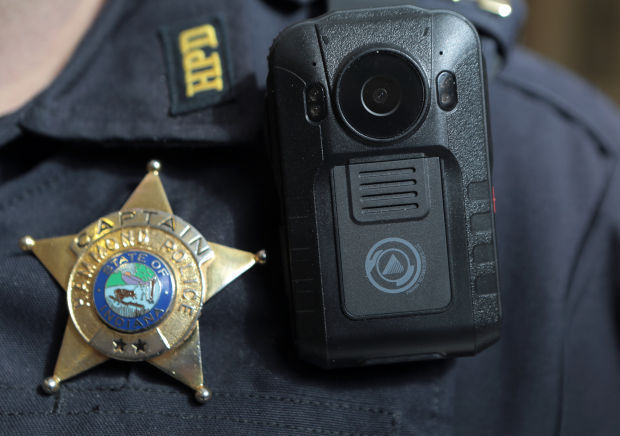 A close-up of a body camera tested by the Hammond Police Department.

The national debate over how police interact with the public hasn't gone unnoticed by several chiefs in Lake County.

It's the paths they're taking to increase police accountability that differ.

Hammond Police Chief John Doughty said his department is currently testing body cameras from four companies. All officers working on patrol, traffic and gang and narcotics units could begin wearing the cameras by this summer.

The cameras often are held up as a way to reduce unfounded complaints and increase police accountability. Two controversies last year in which Hammond police were accused of racial profiling and excessive force have decreased initial resistance to the cameras among the rank and file, Doughty said.

The Gary Police Department also is in the process of acquiring body cameras for testing, spokesman Thomas Decanter said.

East Chicago police have "an open mind" and are researching the feasibility of body cameras, Police Chief Mark Becker said.

One of the greatest challenges facing law enforcement nationally and locally is the recruitment of a more diverse pool of applicants, Griffith Police Chief Greg Mance said.

Most of Griffith's officers are white men, but Mance's administration recognizes the importance of better reflecting the community, he said. Increasing diversity is about building trust, he said.

"To gain those connections, you have to closely mirror the society that you police," he said.

Mance has reached out to local universities, clergy and the community to recruit more women and minorities. He hopes to implement a more long-term solution after a review of the department's policies and procedures, he said.

Hammond will be hiring only experienced police officers until the department refines its hiring process, Doughty said. The new system must increase diversity in a way that's fair to all applicants, he said.

The Gary Police Department is in the initial stages of implementing a more robust community policing strategy, officials said.

When officers patrol the same areas every day, they get to know their communities better, he said. Officials also hope the move creates more stability for officers and boosts morale, he said.

In the long term, the administration hopes to partner with other government agencies, schools, businesses, probation and parole officers and others to address crime.

"It's more than just arresting people and putting them away," Papadakis said. "You want to get a better quality of life."

The department's Community Services division, which is led by Cmdr. Kerry Rice, will be offering its second annual Citizens Academy in February. Other programs include a late-night basketball league for young teens, a Police Activities League summer camp for kids, an Explorer program for high school students interested in law enforcement, block clubs and neighborhood watch groups, Rice said.

Hammond's Community Affairs division is under new management, and officers have been playing basketball with youths, attending crime watch meetings and talking to residents at Coffee with a Cop events. Doughty recently took to Twitter, and the department is posting news at its officials Facebook page.

East Chicago police plan to offer their third annual Citizens Academy this spring. The department also conducts community walks in the summer and meets with businesses, youths, clergy and other groups.

Mance said he's looking at building more partnerships with churches, schools, community organizations and others to address the root causes of crime.

"Kids without a positive outlet often find themselves in trouble," he said.

Though Griffith police can't address the issue alone, they can partner with other organizations to find solutions, he said.

Accreditation in the offing

Schererville police are at the forefront of a push for national accreditation, Police Chief David Dowling said.

Accreditation "goes a long way in dealing with concerns seen across the country" and the question of transparency, he said.

The Schererville Police Department was recognized in 2007 and earned full accreditation from the Commission on Accreditation for Law Enforcement Agencies in 2011. Last year the department received its first full reaccreditation, Dowling said.

Departments accredited by CALEA must meet about 180 standards, Dowling said. Munster and Valparaiso police also have national accreditation through CALEA.

East Chicago, which has been using ShotSpotter technology to pinpoint gunshots, will be adding another new technology to its toolbox: license plate readers.

The department plans to purchase two sets of cameras that will scan license plates and provide police with real-time data, Becker said. The cost for the cameras and data storage is between $35,000 and $40,000, he said.

Some of the cameras will be mounted on patrol cars, and at least one will be placed at a busy location so police can get an idea of who is entering and exiting the city, he said.

Dowling said Schererville has been using a mobile license plate reader for six months for traffic enforcement. He plans to work with town officials to encourage developers to buy stationary license plate readers for new commercial projects, he said.

"It's a great tool, but it's an expensive tool," Dowling said.

East Chicago, Gary, Griffith and Schererville police are among more than a dozen departments that have partnered with Indiana University Northwest's Center for Urban and Regional Excellence and assistant professor Joseph Ferrandino for a data-sharing project.

Becker, who recently referred to Ferrandino as “a hero to local police," said his department has added a new intelligence officer position to interpret the data generated by the project.

"It's a critical position to put all that information together and make sense of it," he said.

Mance said working with IUN has furthered his goal of increasing transparency and he'll be looking to expand the partnership.

In addition to sharing crime data with each other, several agencies are giving residents a look by posting crime maps each week at www.nwi.com/regionalcrimereport.

Finding the funding for new vehicles also remains a challenge for some departments.

Dowling said one deficiency he noticed when he took office several years ago was a lack of in-car cameras. The Schererville Police Department now purchases the cameras with every new vehicle, he said.

"The equipment we put in squad cars costs almost as much as the cars themselves," he said.

Dowling also said an increase in traffic stops contributed to a 25 percent reduction in overall crime in Schererville. One of his goals in to continue to reduce crime, he said.

Federal grants for police equipment have been curtailed, and the department's budget has been shrinking for years, Papadakis said.

"We have to deal the best we can with what we have," he said.

To make our communities safer and bolster public trust, I am working through my role as chairman of the Illinois House Judiciary-Criminal Law …

EAST CHICAGO | Several East Chicago police officers have received promotions, which were all effective on July 11.

HAMMOND | Lt. Steve Kellogg believes the vast majority of residents back the Hammond Police Department, but there may be some who lack respect…

Hammond police Capt. Rudy Grasha wears a demo body camera the department is testing. The camera is among four brands the department looking at buying.

A demo body camera the Hammond Police Department is testing. The camera, made by VIEVU, is among several brands the department is considering for purchase.

A close-up of a body camera tested by the Hammond Police Department.