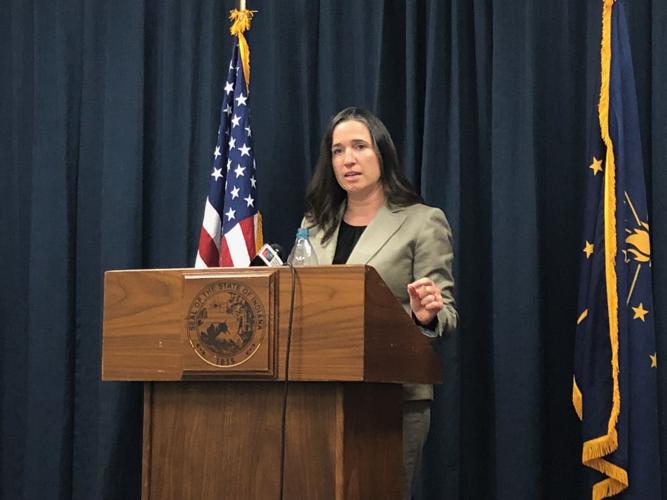 State Auditor Tera Klutz speaks at the Statehouse in 2018. 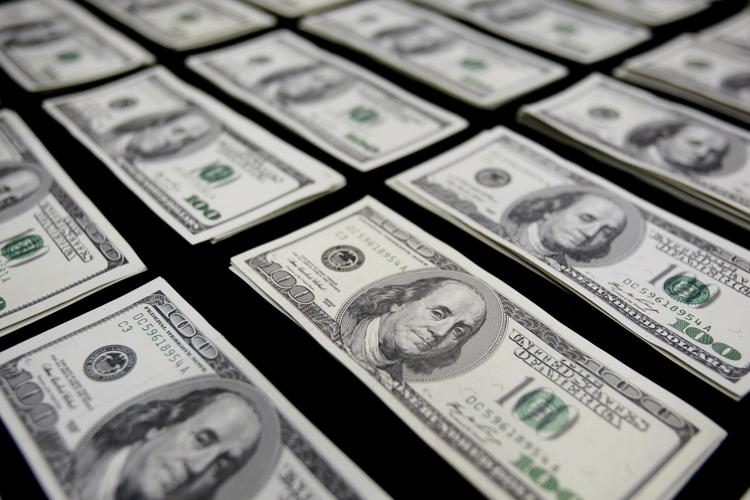 The check is in the mail — for real, this time.

Following months of delays caused by a nationwide shortage of security paper, the state auditor on Monday will begin printing some 1.7 million paper checks to return a portion of Indiana's bulging budget reserves to Hoosier taxpayers.

The checks initially were going to be worth $125 per eligible taxpayer, or $250 for a married couple, as an automatic taxpayer refund linked to excess state revenue at the end of the 2021 budget year.

However, earlier this month the Indiana General Assembly decided to send eligible Hoosiers a second distribution of $200 based on the state's unprecedented tax receipts during the 2022 budget year that ended June 30.

The fortuitous timing of State Auditor Tera Klutz finally obtaining the needed security paper and Gov. Eric Holcomb signing Senate Enrolled Act 2 into law means the two payments can be put onto a single check, saving the state about $1 million in paper, printing and mailing costs, according to the auditor's office.

As a result, eligible taxpayers now will be receiving one check for $325, or $650 for married couples — sometime in the next couple months.

The continuing delay is because the state auditor's office only is able to print about 50,000 checks per day, so it will take approximately 35 working days, or until early October, to print them all.

But the office isn't waiting for every check to be printed before it starts mailing them. Checks printed Monday, for example, could begin arriving in taxpayer's mailboxes across Indiana as soon as Thursday.

The majority of Hoosiers who have their bank account information on file with the Indiana Department of Revenue (DOR) already received their $125 automatic taxpayer refund as a direct deposit several months ago.

They'll get the $200 payment as another direct deposit, likely before the end of August.

The state auditor and DOR are warning Hoosiers to be mindful of scams regarding the taxpayer refunds, which only will be issued by direct deposit or check.

Hoosiers should ignore any text messages, emails or phone calls concerning the payments, especially messages containing links or requesting personal or financial information, such as Social Security or bank account numbers, they said.

The agencies also ask Hoosiers to wait patiently for their payment to arrive and refrain from contacting DOR until at least Nov. 1 seeking information on the status of their payment.

In addition, not all Hoosiers qualify for both payments. To get the $125, a taxpayer was required to file a 2020 Indiana income tax return prior to Jan. 3, 2022. Individuals who did not file a 2020 tax return are not eligible for the payment.

The total cost to the state of the $200 payments is approximately $1 billion. Records show Indiana ended the 2022 budget year with reserves totaling $6.1 billion, well above its usual reserves balance of about $2 billion.

The $125 payments cost the state $545.3 million during the prior budget year when state reserves sat at $3.9 billion, according to the State Budget Agency.

If Senate Bill 2 is approved by the House Friday, the Republican-controlled Senate need only consent to the revisions to send the legislation to Gov. Holcomb to be signed into law.

Indiana is the first state to legislatively impose new abortion restrictions following the June 24 Dobbs v. Jackson ruling by the U.S. Supreme Court that rescinded the right to abortion.

On Friday, the Indiana House voted 93-2 to advance its family and children spending plan to the Senate, while the Senate voted 46-1 to send its proposal for "wraparound services" to the House.

Women's access to abortion largely could be eliminated in Indiana as soon as mid-August under legislation unveiled Wednesday by Republican Senate leaders.

There were 176 new Indiana laws approved this year by the Republican-controlled General Assembly and enacted by Republican Gov. Eric Holcomb, mostly during the month of March.

Billy Butler, of Mishawaka, is accused of allegedly engaging in "jackpot switching" as a way to avoid having his casino winnings seized to cover unpaid child support obligations, records show.

One of the biggest gambles in the history of Indiana's gaming industry has unquestionably paid off across the board.

Missing Gary man may be in extreme danger

Moog was last seen at 3:15 a.m. Saturday wearing gray pants with no shirt and no shoes, according to the Gary Police Department.

Governor no longer needs glasses to look ahead

The 54-year-old Republican underwent surgery earlier this month to remove cataracts from both of his eyes and to improve his vision overall.

Data released Friday by the State Budget Agency show Indiana took in $1.55 billion in general fund revenue during the month of August.

Just about every Hoosier expecting their $325 in state taxpayer refunds to come as a paper check should by now have received their money.

State Auditor Tera Klutz speaks at the Statehouse in 2018.