CHICAGO — As he ran from Chicago police, Anthony Alvarez stumbled, a gun in one hand and a cellphone in the other.

By the time the 22-year-old got up and tried to continue moving away, a pursuing officer had caught up to him.

Alvarez collapsed to the ground in a tidy front yard, moaning in pain. “Why are you shooting me?” he said.

“Because you had a gun!” the officer responded.

Graphic police video of Alvarez’s death was released Wednesday by the Civilian Office of Police Accountability, which is investigating whether Solano violated Police Department rules when he fatally shot Alvarez in the Portage Park area late last month. It was the second time in less than two weeks that officials released footage of an officer killing someone during a foot chase, adding further fuel to heated conversations over police policy.

At no point on the footage does Alvarez appear to point a weapon at the officer who was chasing him. But the shooting remains under investigation, and how it might appear in the light of existing Chicago Police Department rules and Illinois law remains to be seen.

Very little was made public Wednesday about why the officers were chasing Alvarez in the first place.

Still, COPA immediately urged police Superintendent David Brown to relieve Solano of his police powers pending the investigation, an action usually taken if the agency suspects there might have been missteps by police.

Brown spoke to the media shortly after the video’s release and said the officer had only been placed on 30-day standard leave. He also provided an update on the formulation of a foot-pursuit policy for CPD, saying he has a draft of one in hand, and the department was continuing to gather information from other cities.

The department also was collecting input from officers and the community, he said, and will be working with a monitor who is overseeing federal court-ordered reform of the department to complete the new rules.

Mayor Lori Lightfoot called for a new policy in the wake of the recent shooting of 13-year-old Adam Toledo in Little Village that took place after an officer chased the teen on foot. Video of that shooting was released earlier this month.

Brown noted the importance of finding the best practices around the country to draw from, noting the sense of urgency created by the Toledo and Alvarez shootings, as well as the general danger foot pursuits present to his officers, the public and “offenders fleeing.”

“We are obviously proceeding with a sense of urgency,” Brown said. “It really is important for us to get it right.”

Alvarez was killed during the early morning hours of March 31 near Eddy Street and Laramie Avenue. He died of multiple gunshot wounds, according to the Cook County medical examiner’s office.

On the police body-camera footage released by COPA, officers can be seen running down an alley at first, then bearing down on Alvarez as they turn a corner onto a small lawn.

Police have said they recovered a pistol at the scene. Third-party camera footage that seems to be from a security camera from the home Alvarez was shot in front of shows him release what appears to be an object shaped like a gun as he falls to the ground.

Footage from that camera shows a high-angle view of the shooting: Alvarez runs into the frame, stumbling twice as the officer gains ground on him. The video is clear enough to see the muzzle flash from the officer’s pistol as he fires.

Taken minutes before the shooting, security footage released by COPA overlooking a nearby gas station shows Alvarez walking through its lot briefly with what appears to be a plastic bag. He can be seen running and dropping the bag as an unmarked police SUV, with its emergency lights flashing, begins moving toward him.

Another third-party camera shows Alvarez running from the gas station onto a sidewalk while the police SUV follows him on the street. Alvarez then can be seen making his way through the alley where footage captured the ensuing foot pursuit.

So far, the only possible explanation for why police were chasing Alvarez has come from Tim Grace, Solano’s attorney, an explanation police have not confirmed. Officers had tried to curb his car the night before, but he fled and officers decided not to pursue him, Grace said.

When police spotted Alvarez the night of the shooting, they tried to stop him again, Grace said, and eventually chased him on foot. On some of the video footage, Alvarez can be seen stumbling, but according to Grace, Solano did not see that and was expecting Alvarez to be much farther ahead of him when he turned the corner at the end of the alley.

The officer saw Alvarez close to the ground trying to raise himself up.

“So what flashes through (Solano’s) head is, ‘Is this guy going to ambush me?’” Grace told the Tribune. “Then he gets confirmation there’s a gun in his right hand.”

Authorities have not released exactly where on Alvarez’s body he was struck by the shots. But Alvarez’s pants were bloodied after the shooting, and an officer can be seen on the videos applying a tourniquet to his right leg.

After the shooting, Solano can be seen rushing to guard the apparent gun on the ground while his partner tries to give Alvarez first aid.

“Offender’s down, weapon’s on scene,” Solano can be heard telling a dispatcher. He requested an ambulance but gave an incorrect address — saying they were on Dakin Street, not Eddy.

As more police arrived, other cops took over the first aid, the video shows, and the officer who fired shots can be seeing walking around the yard.

Officers can be seen surrounding Alvarez as the CPR continued.

At his news conference, Brown refused to comment on why police attempted to stop Alvarez. He emphasized the need to not sway the investigation, because of his role in deciding punishment.

“It’s really important as the final decision maker (that) I withhold opinions,” he said.

Todd Pugh, who is representing the Alvarez family, said late Tuesday the fatal shooting of the young father has left his family “with more questions than answers.” The family viewed the video the night before its release at COPA headquarters.

“But I know what I saw,” Pugh told a group of reporters after that viewing. “And I saw a Chicago police officer shoot their son as he ran away from (police).”

On Wednesday the family released a statement asking again why their son had been pursued and shot in such a way. They called for authorities to investigate thoroughly.

“Anthony’s family would like to remind the public that Anthony’s legacy is much more than being ‘just another victim of a police shooting.’ Anthony was only 22 years old and a young father to his two-year-old baby girl when he was killed,” the family statement read. “His family and friends remember him as a doting dad who put aside his goal of playing professional soccer when he learned that his girlfriend was pregnant.”

In the hours following the shooting, police said Alvarez was armed with a handgun while running away from police before the officer opened fire on him.

Current department policy allows officers to use deadly force on a fleeing suspect only if the person is demonstrating an “imminent threat” — that is, when it is reasonable to think that the suspect’s actions are “immediately likely” to hurt or kill someone, according to the department rules. Illinois law allows officers to use deadly force if they reasonably believe it is necessary to prevent the escape of someone who either committed or attempted certain kinds of felonies, tries to escape police “by use of a deadly weapon,” or indicates he will endanger human life.

Experts have said most state law around the country gives great deference to officers. University of Missouri at St. Louis professor David Klinger, who is a former police officer in Los Angeles and Redmond, Washington, said it was noteworthy to him after viewing the video that Alvarez apparently ran for as far as he did while apparently continuing to hold the weapon.

“It is not out of bounds for that officer to fear that the reason the person has the gun is to shoot him,” Klinger said.

But with the city once again reeling from the release of video of a fatal shooting by an officer, Lightfoot late Wednesday released a joint statement with Northwest Side Ald. Ariel Reboyras, 30th, and Ald. Felix Cardona, 31st, expressing their condolences.

“To see this young man, who was also a young father, dying in the prime of his life is incredibly heartbreaking,” they said. “Together, we offer our deepest condolences to the Alvarez family and all those who knew and loved Anthony.”

Although what started the fatal pursuit was not clear, Lightfoot and the aldermen said, “a minor and inconsequential incident should never, and can never again, result in someone’s death.”

“The loss of our city’s youth can no longer be the milestones by which we measure our collective failure,” the statement said. “As a city, we must do better.” 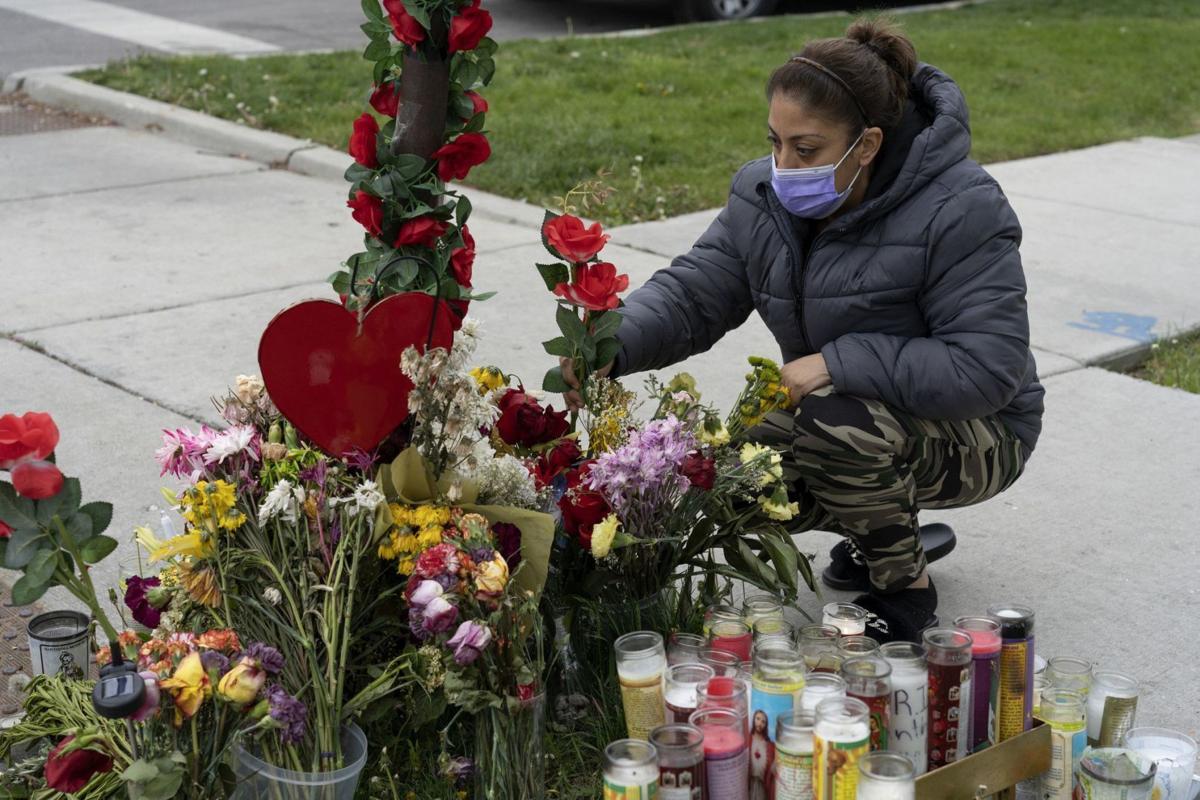 Veronica Alvarez visits the memorial for her son, Anthony Alvarez, on April 28, 2021, near where he was fatally shot by police during a foot chase in the Portage Park neighborhood. 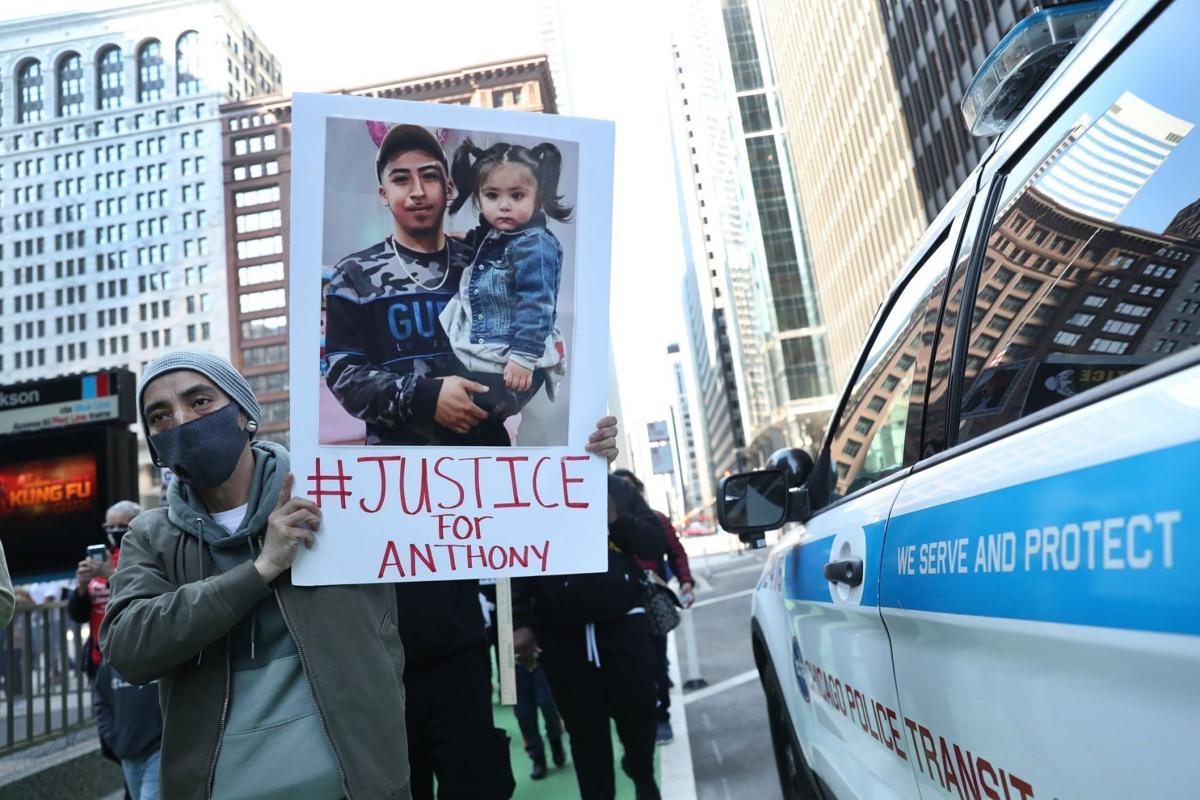 Edgar Meranda, cousin of Anthony Alvarez, marches with others protesting against the police in downtown Chicago on April 3, 2021.