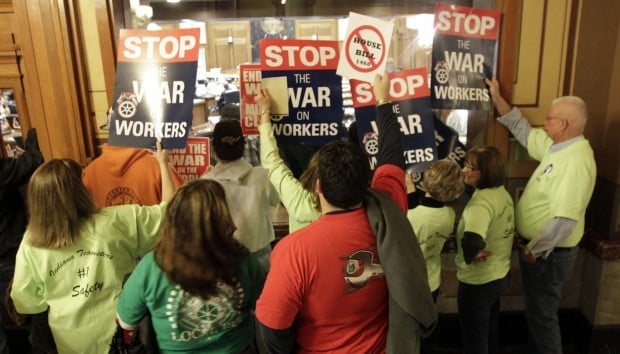 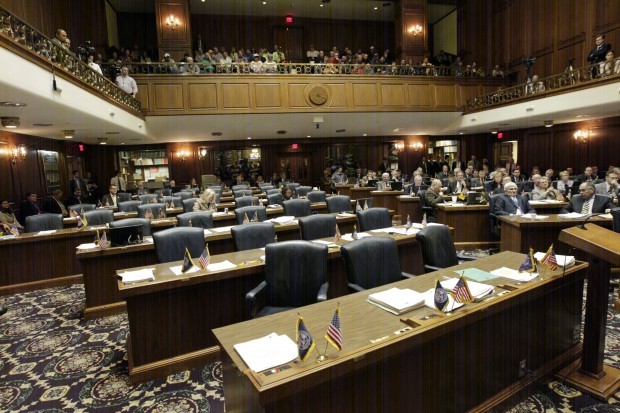 The Democratic side of the house sits nearly vacant Tuesday after the Democrats refused to convene at the Statehouse in Indianapolis. 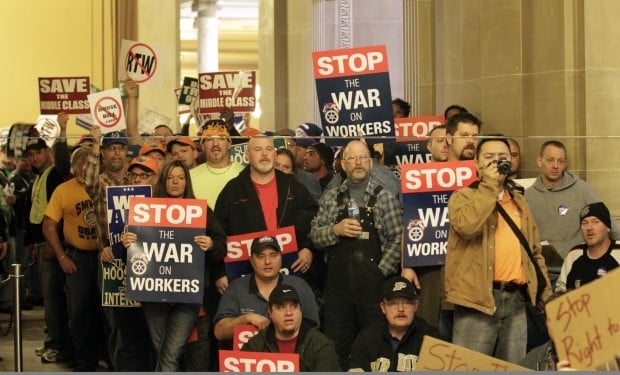 People chant at the Statehouse during protests by labor unions against the right-to-work bill. Democrats' walkout killed the measure.

Protesters voice their angst against the right-work bill Tuesday at the Statehouse in Indianapolis.
By Dan Carden , (317) 637-9078

INDIANAPOLIS | Indiana House Democrats have left the state, are together at a hotel in Champaign-Urbana, Ill., and said they may not return to the Statehouse at all this week.

With Democrats not showing up for scheduled House sessions, there are not enough representatives in the chamber to take legislative action. On Tuesday, that prevented approval of the committee report for right-to-work legislation, essentially killing House Bill 1468.

"There's all kinds of partisan stuff that's going on that's never gone on before, the radical changes to Hoosier families, the kinds of things that we just do not support and can't support -- attacking the minimum wage, diverting state school funding from local schools to charter schools and vouchers," Lawson said.

State Rep. Shelli VanDenburgh, D-Crown Point, said not showing up was the only way Democrats could stop legislation that will hurt Hoosiers

"When the only card you have to play is the walk card, it's our responsibility to the people we represent to do that," VanDenburgh said. "They're just moving entirely too fast this year and really pushing some unfriendly-to-family legislation."

House Speaker Brian Bosma, R-Indianapolis, called the House into session every two hours Tuesday to see if enough members were in the chamber to conduct business. Republicans control 60 seats in the 100-member House, but 67 members must be present for any vote.

"I'm disappointed that (Democrats) are not here to do the work that they were hired to do on Nov. 2," Bosma said.

But Republican Gov. Mitch Daniels said the protests are a "perfectly legitimate" part of the legislative process. Daniels said he never thought about sending state troopers after the Democrats, though he said now that Democrats have killed the right-to-work legislation, they should return to the Statehouse.

In December, Daniels told Republican House leaders not to take up a right-to-work bill this session and instead focus on the state budget.

Democrats met in Indianapolis on Tuesday morning before leaving for the Champaign area in the afternoon. State Rep. Dan Stevenson, D-Highland, said it was unlikely Democrats would return Wednesday, and VanDenburgh said they may stay away the rest of the week.

Union leaders say without adequate funds unions will be at a disadvantage negotiating for wages, benefits, safety issues and conditions of employment.

An Indiana House committee voted on party lines to approve the right-to-work proposal Monday, but the committee report needed to be approved by the full House Tuesday if the measure was to get a vote by Friday's final-vote deadline for House bills.

Union workers have packed the Indiana Statehouse, as well as state capitols elsewhere, to protest legislation they see as anti-union.

In Wisconsin, the state Senate was unable to take up a union measure that would strip unionized public employees of most of their bargaining rights because its 14 Democrats skipped town last week, denying the chamber a quorum. But Assembly Speaker Jeff Fitzgerald pledged his chamber would approve the bill this week.

A similar debate in Ohio drew thousands of union protesters Tuesday, prompting officials there to lock the doors to the Statehouse.

If Indiana House Democrats stay away all week, 46 other bills would die, including House Bill 1003 authorizing public funds to pay for private school vouchers and House Bill 1574, a proposed levee maintenance fee for property owners living near the Little Calumet River.

VanDenburgh said killing all of those bills would be fine with her.

"When you weigh the good and the bad, the bad far outweighs what little good they're finally trying to do," she said.

House standoff continues for second day with no end in sight

INDIANAPOLIS | They came early in the morning and stood in the rain waiting to pass through extremely tight Statehouse security.

INDIANAPOLIS | A House committee Monday approved a right-to-work proposal that Hoosier union workers say is an attack on union rights. The House Employment, Labor and Pensions Committee voted along party lines, 8-5, to send House Bill 1468 to the full, Republican-controlled House.

INDIANAPOLIS | The chants were louder and the mood more jubilant among thousands of protesters Wednesday at the Statehouse.

The Democratic side of the house sits nearly vacant Tuesday after the Democrats refused to convene at the Statehouse in Indianapolis.

People chant at the Statehouse during protests by labor unions against the right-to-work bill. Democrats' walkout killed the measure.

Protesters voice their angst against the right-work bill Tuesday at the Statehouse in Indianapolis.
© Copyright 2021 NWI Times, 601 W. 45th Ave. Munster, IN | Terms of Use | Privacy Policy
Powered by BLOX Content Management System from TownNews.com.
You don't have any notifications.