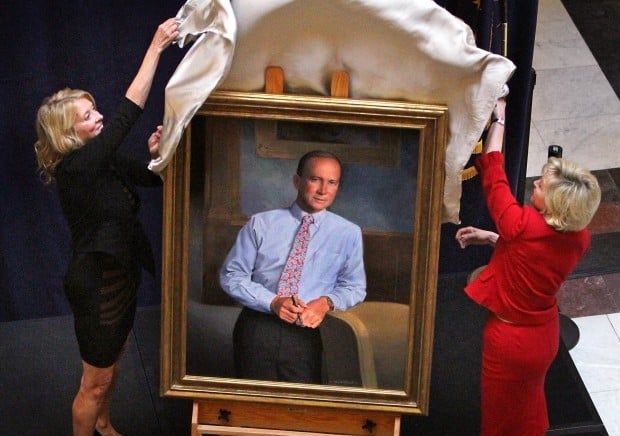 First lady, Cheri Daniels, left, and Lt. Gov. Becky Skillman remove the covering, Tuesday during the official unveiling of the official portrait painting of governor Mitch Daniels in the south atrium of the State House in Indianapolis. The governor was joined by his wife Cheri and Lt. Gov. Becky Skillman at the unveiling, including the artist himself, Richard Halstead. 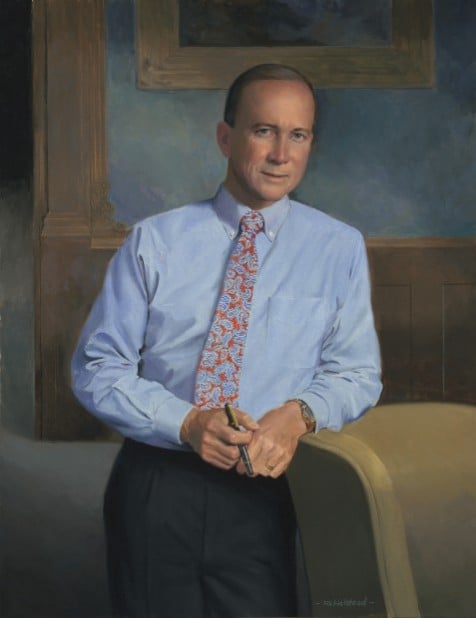 INDIANAPOLIS | The official portrait of Gov. Mitch Daniels was unveiled Tuesday at a Statehouse ceremony featuring fond memories, a few tears and plenty of friends.

The portrait, which will hang in the governor's reception room in the Statehouse, depicts Daniels standing in the governor's office wearing a blue shirt and paisley tie. His left arm is resting on top of a yellow wing chair and he's holding a pen in his right hand.

"I know that a camera these days can document our leaders in a much more efficient manner, but a painting speaks more of the unbroken connection between the past, the present and the future," Halstead said.

The famously self-deprecating Republican governor told the hundreds gathered for the unveiling in the Statehouse's south atrium that he was "a royal pain in the backside" when it came to planning and posing for the portrait, which was paid for by private donations.

"I was in denial about the whole idea for a long time," said Daniels, whose term ends Jan. 14. "In any event, I was wrong and it's a fabulous project, and obviously in terms of our history something that is essential to do."

Daniels said he wished his individual portrait could instead be a "cyclorama," a long mural depicting all of the events of his administration and the many people who made them possible. The governor wiped away tears as he described how he'd like his eight years in office to be remembered.

"I hope that long after anybody can name the person in that picture, young people of today and those who were adults when it happened will look back and say this was a time of action and turning a corner in Indiana," Daniels said. "Where a lot of good people came to do the citizens' job, a job once described as 'the rent we owe this country.' "

"They weren't on the make for anything else, they weren't just here trying to touch up a resume or just trying to prepare for the campaign for the next political office. They had no agenda other than to build a much better and stronger state for the young people so soon to come after them."

INDIANAPOLIS — Portrait artists with ties to Indiana have only until Friday to apply to paint an image of Gov. Mike Pence that will hang in th…

First lady, Cheri Daniels, left, and Lt. Gov. Becky Skillman remove the covering, Tuesday during the official unveiling of the official portrait painting of governor Mitch Daniels in the south atrium of the State House in Indianapolis. The governor was joined by his wife Cheri and Lt. Gov. Becky Skillman at the unveiling, including the artist himself, Richard Halstead.