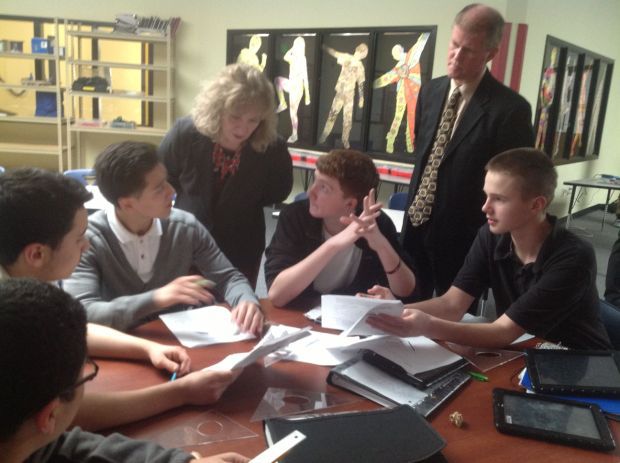 State education leader Glenda Ritz talks to a group of students at the Hammond Academy of Science and Technology during a recent visit to the charter school. HAST Principal Sean Egan looks on as she talks to students. 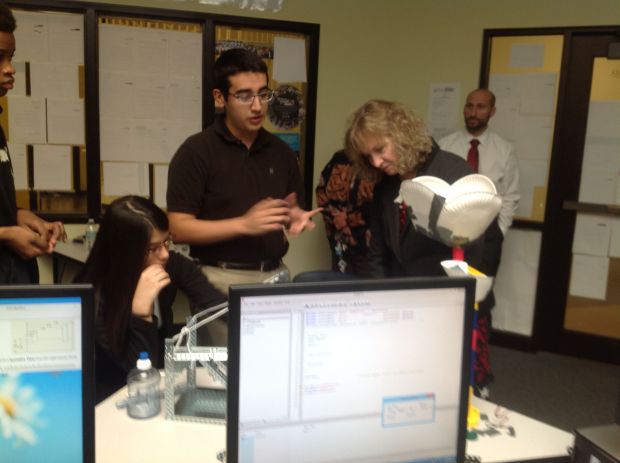 INDIANAPOLIS | The Indiana State Board of Education adopted new state standards for math and English/language arts Monday in Indianapolis.

State Board member Andrea Neal was the lone vote against the new standards, saying the standards adopted Monday do a disservice to children.

"Leading mathematicians have described the new math standards as poorly written, disorganized and erroneous," she said reading from a prepared speech.

In talking about the lack of required literature reading in the standards, Neal said, "I am a pirate with a wooden leg," quoting from a lesson plan on Shakespeare and iambic pentameter." Shakespeare's sonnets are written predominantly in a meter called iambic pentameter, a rhyme scheme in which each sonnet line consists of 10 syllables.

Neal said that kind of literature won't be required reading. She said experienced teachers will likely continue to teach great literature, but new teachers might not recommend good literature if it's not required. Neal also suggested the state should readopt its 2006 standards.

Gary attorney Tony Walker, who is a member of the State Board of Education and supported the new standards, said it's not fair to expect students to be rocket scientists. He said there will always be students who are low-achieving and high-achieving, and parental involvement is important.

In a statement Walker released prior to the meeting, he said, "I believe they meet the standard of College and Career Readiness as defined by Indiana Public Law 31-2014. The State of Indiana defines College and Career Readiness as 'the standards that a high school graduate must meet to obtain the requisite knowledge and skill to transition without remediation to postsecondary education or training, and ultimately into a sustainable career.'"

Walker said if the standards are implemented with sound curriculum and good teaching, this minimal goal should be achieved.

However, Walker said he was "deeply concerned" the standards are not competitive with international benchmarks and several professors said the math standards were not "first rate."

Kathleen Porter-Magee, a Bernard Lee Schwartz fellow at the Washington, D.C.-based Fordham Institute who critiqued the standards, said the new state-adopted standards were less rigorous than Common Core and the state's previous standards.

"While Common Core critics have complained the new Indiana ELA and math standards are merely a 'rebranded' version of the CCSS, the reality is quite different. And worse," Porter-Magee said.

"For ELA in particular, the Department of Education has copied virtually every standard verbatim, but gutted the guidance that grounded the Common Core in content and rigor."

Hebron schools Superintendent George Letz said he strongly supported Common Core and was disappointed the state decided not to use those standards. "It's going to cost millions of dollars to develop a new assessment (replacing ISTEP-Plus) in line with the new standards," he said.

School districts across the state have spent thousands of dollars to align with Common Core. State officials have said the move to new state standards and a new assessment will cost millions of dollars.

Letz said people began to move away from Common Core after President Barack Obama supported it and tied an education grant program (Race to the Top) to the standards.

"Common Core did not come from the federal government," he said. "The new standards have been approved. At the end of the day, we've got to move forward so we can begin developing the curriculum to meet the standards."

Local teachers, parents and administrators are incensed about the increased time students will spend taking the new ISTEP-Plus practice test a…

State education leader Glenda Ritz talks to a group of students at the Hammond Academy of Science and Technology during a recent visit to the charter school. HAST Principal Sean Egan looks on as she talks to students.