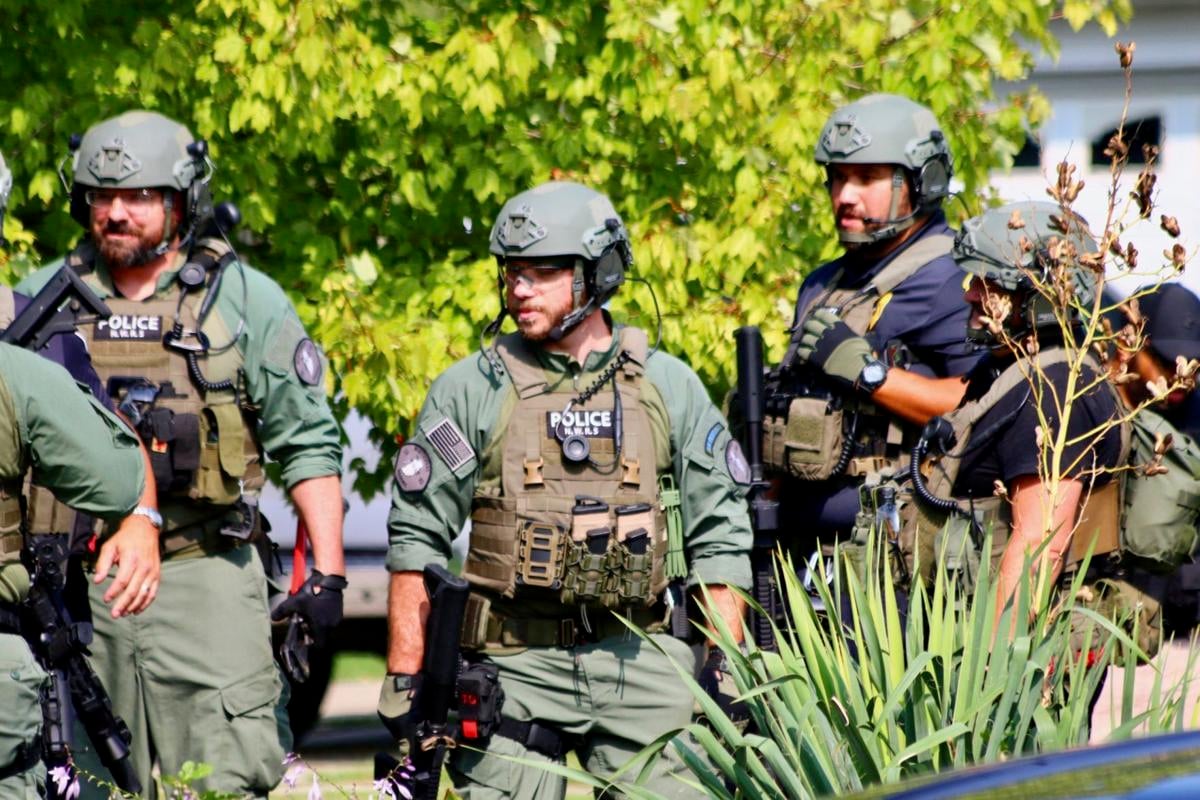 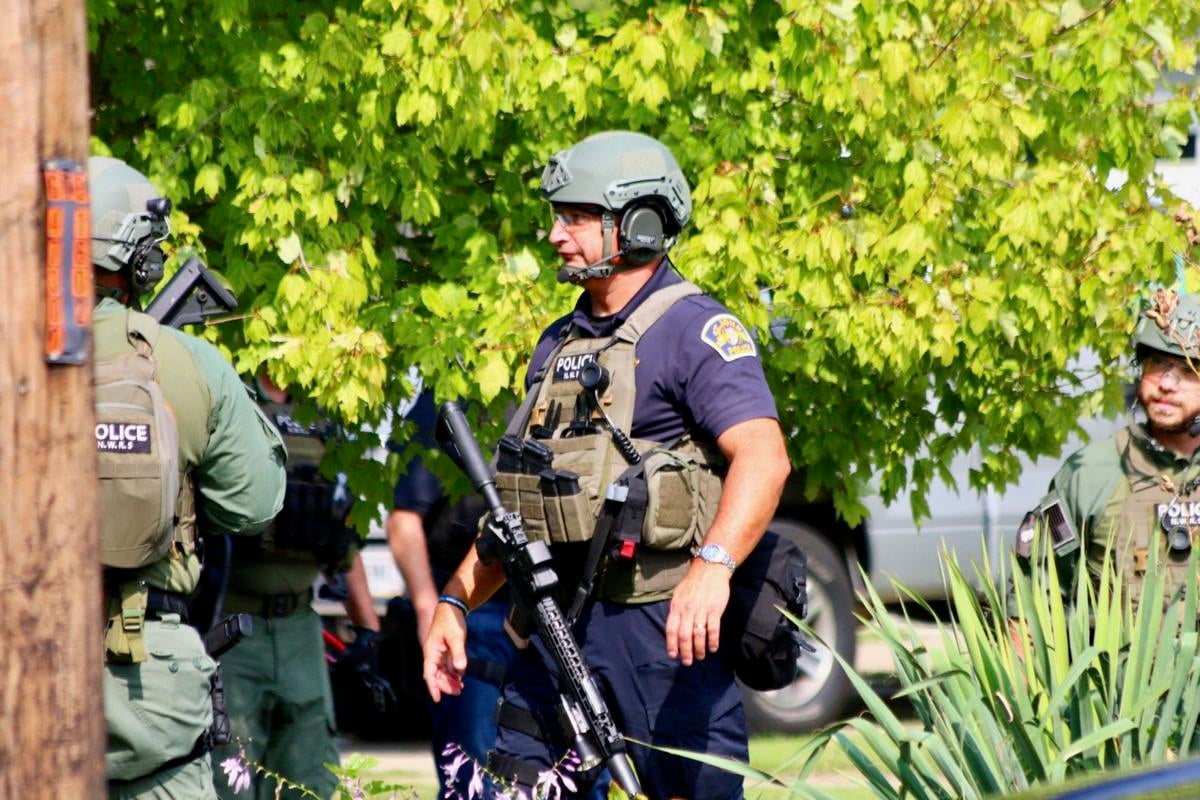 A man was taken to a hospital after calling Hobart police Wednesday and threatening to harm himself. The Northwest Regional SWAT team assisted Hobart police during the standoff in the 200 block of Wilson Street. 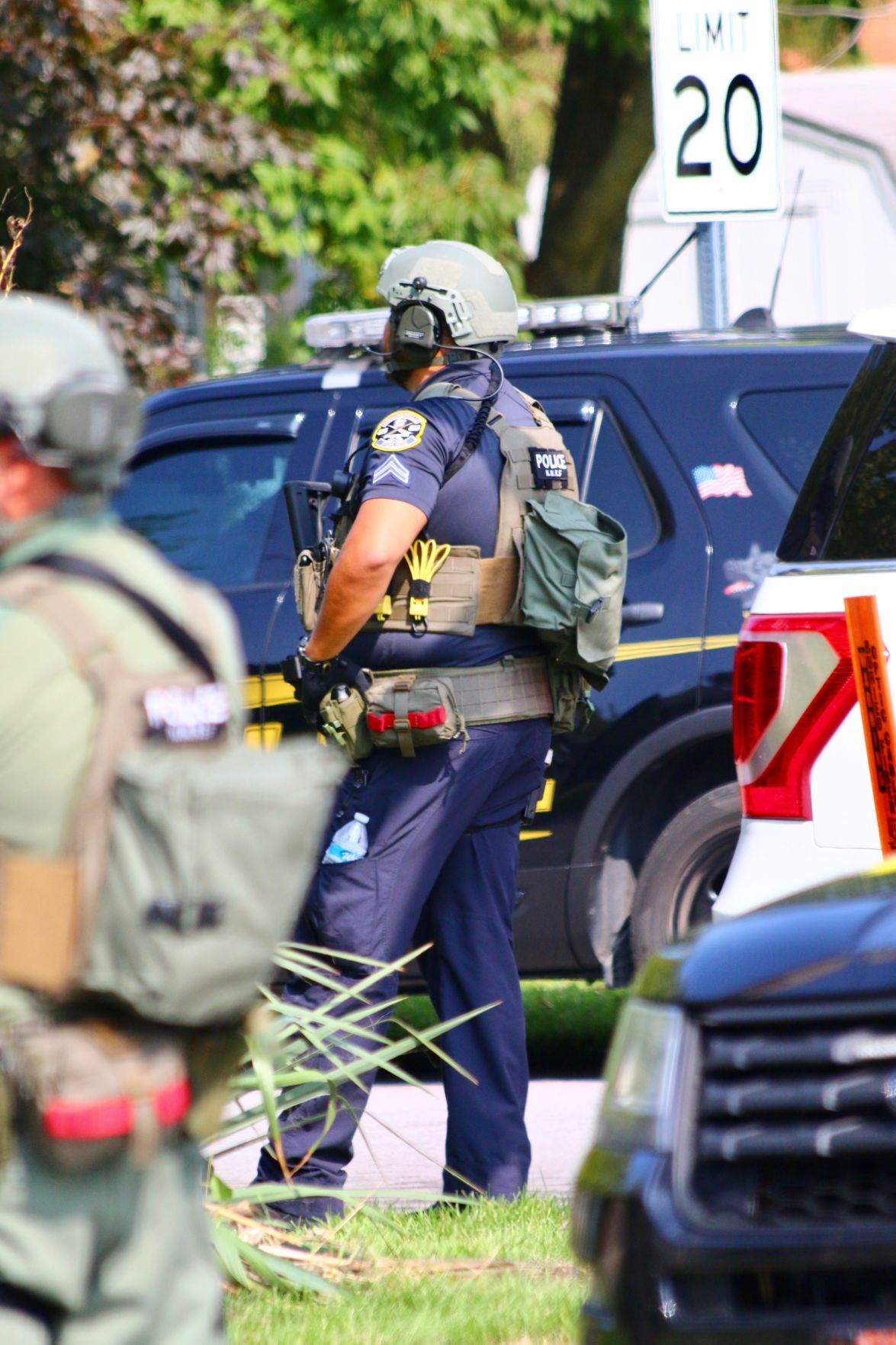 HOBART — A standoff Wednesday afternoon near a learning center on the city's west side ended peacefully after a man called police threatening self-harm for the second time in the last few days, police said.

A man who barricaded himself inside a home in the 200 block of Wilson Street was taken into custody about 2:40 p.m. Wednesday and transported to a hospital, Hobart police Capt. James Gonzales said.

No injuries were reported in the standoff, which began about noon and resulted in a "soft lockdown" at the School City of Hobart's Early Learning Center just down the street in the 400 block of Wilson Street. No one was permitted to enter or exit the facility, and the children couldn't go outside, police said.

The man, who lives alone in the house, called the police Tuesday and threatened to harm himself and others if anyone entered his home, Gonzales said.

The man indicated he had a weapon, but did not specify what type, police said.

Negotiators, the Northwest Regional SWAT team and several local departments assisted Hobart police during the standoff, in which officers talked to him through an open window on the south side of his home. Residents were asked to avoid the area of Old Ridge Road and Wilson Street during the standoff because of police activity.

The man refused repeated requests to exit his house, so SWAT officers came through the alley and entered to restrain him and stop him from harming himself. He had a "rudimentary weapon" of a wooden stick with knives duct-taped to it, Gonzales said.

He was taken to a nearby hospital for psychiatric committal.

Neighbors said they had had repeated issues with the man, who placed couches, ladders, grills, dog pools and assorted junk in his yard. Gonzales said he had previously been cited for code violations and police removed "an extensive amount of debris" from his property, which neighbors said was enough to fill four or five dumpsters.

The man's home had a sticker on the front door saying "there's no such thing as too much ammo" and ladders fashioned into a crude barricade blocking off the front door, which neighbors said had been in place for months. Neighbor Tian McInturff said at one point he had been stacking couches lined like a fence along his yard and had five ladders and a pulley running up to a tree "as though someone who didn't know how to build a tree fort was building a fort or a stand for hunting."

She said the man was prone to being combative, such as when her husband crashed a small remote-controlled toy car on his lawn and he came rushing out with an ax and "went berserk," threatening to smash it up.

"We had an unrelated issue where a raccoon was loose in the neighborhood where he was so volatile with the cops they turned around and put on their inspector vests and got him for housing authority code violations," she said. "How it didn't get to a mental evaluation at that point is beyond me with the situation he was living in."

Neighbors said the man, who neighbors said lived there for about two decades, once spent days crushing cinder blocks into gravel on his front yard, at one point completely covered his back yard in a tent made with tarp, and often tried to sell or trade them things, such as pools, leather jackets and dining room sets.

Neighbor Katie Clauson said he had recently been pacing in his driveway, talking to himself about people wanting to hurt him.

"There's just something off with him," Clauson said. "He's admitted to me he sits by his dining room window and watches the neighborhood."

Police were called out two days earlier after the man called police and threatened self-harm, but that instance did not require such a large police presence and escalate into a standoff, Gonzales said. The man was taken to St. Mary Hospital in Hobart and released after a 24-hour period of observation.

This time police got a judge to issue an emergency detention order, Gonzales said.

"He will be transported to a mental hospital or hospital that can accommodate his situation of being emotionally distressed," Gonzales said.

Neighbors said they would not feel safe if he returned again.

"We'll move," McInturff said. "I'm not going to put my kids in jeopardy."

The Hobart Police Department encourages anyone experiencing emotional difficulties to call 911 to get assistance.

Darryl Ivery Jr., 23, of Hammond, was arrested earlier this month on a federal charge of making a material false statement in the acquisition of a firearm.

That project has closed portions of Center, Front and Main streets north of Second Street.

The woman told police she was in her home with her cousin, her cousin's boyfriend and the defendant, her friend of 10 years, court records state.

"The dangerous conditions will be life-threatening for anyone caught in the lake," the National Weather Service said.

A man was taken to a hospital after calling Hobart police Wednesday and threatening to harm himself. The Northwest Regional SWAT team assisted Hobart police during the standoff in the 200 block of Wilson Street.