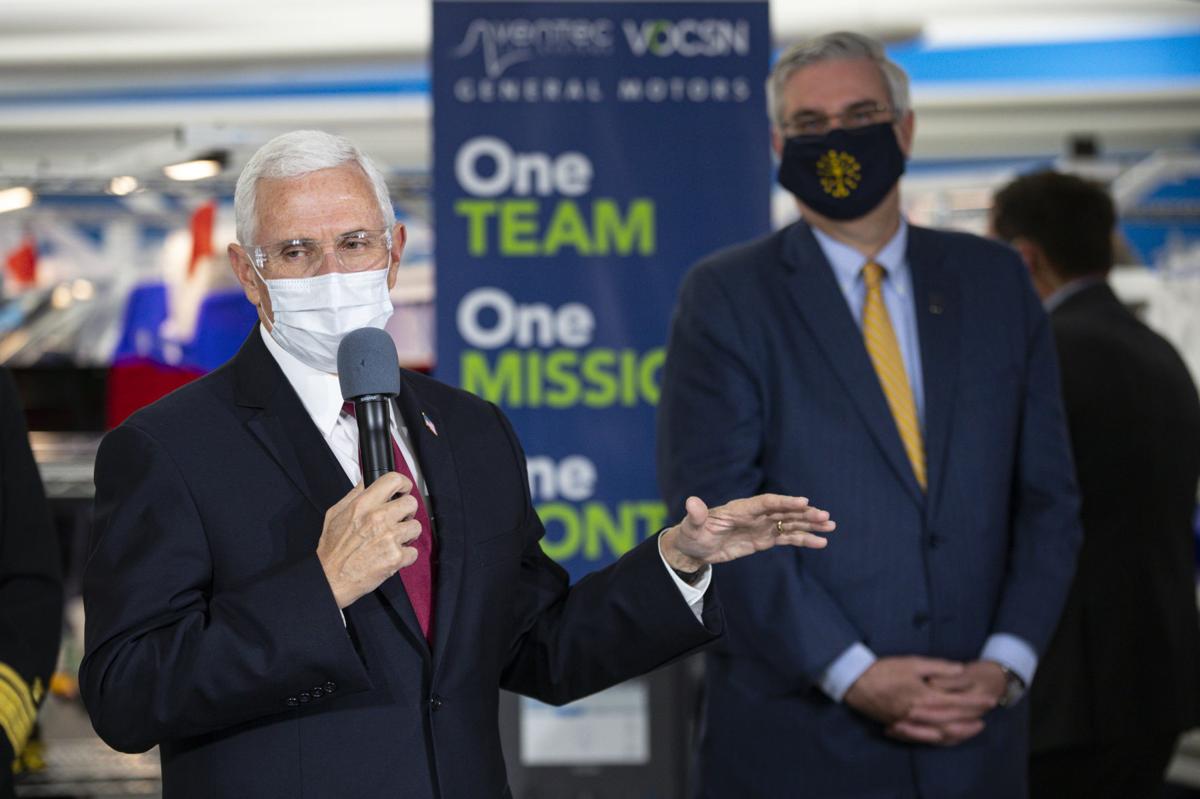 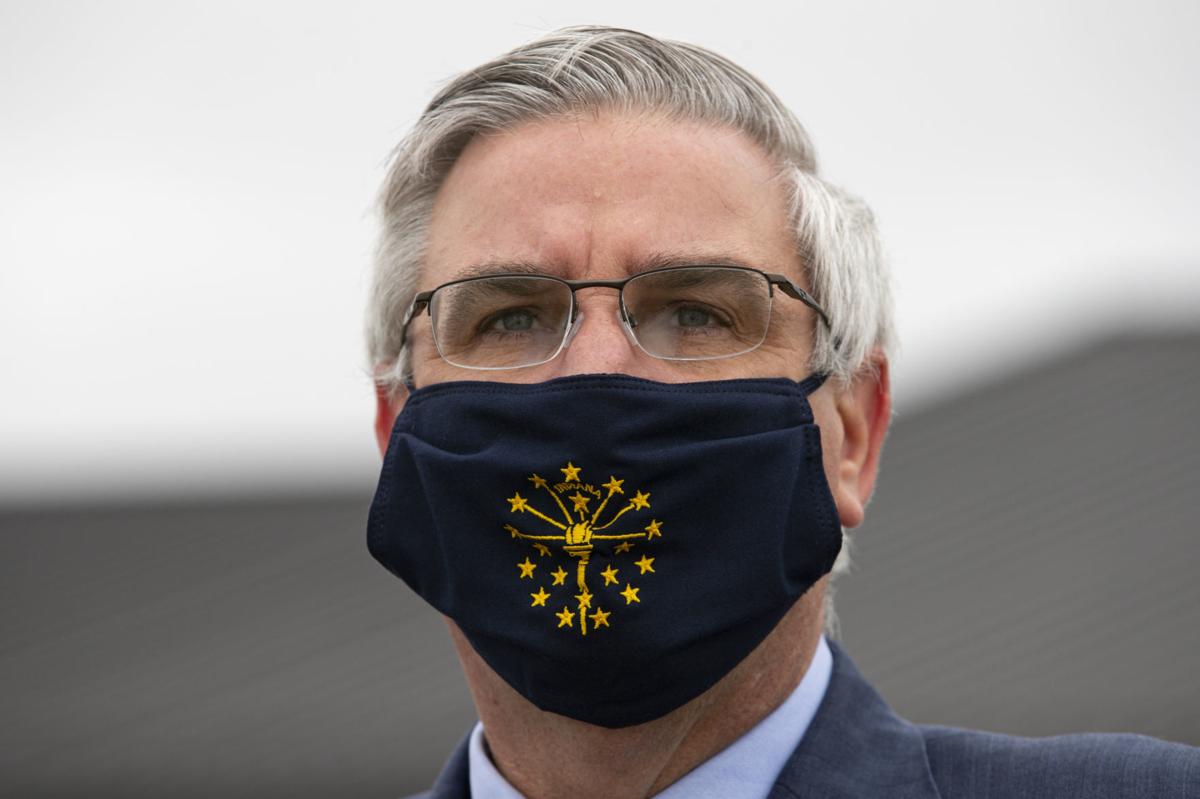 Indiana Gov. Eric Holcomb waits for the arrival of Vice President Mike Pence aboard Air Force Two at Grissom Air Reserve Base before a visits to the General Motors/Ventec ventilator production facility in Kokomo on Thursday. 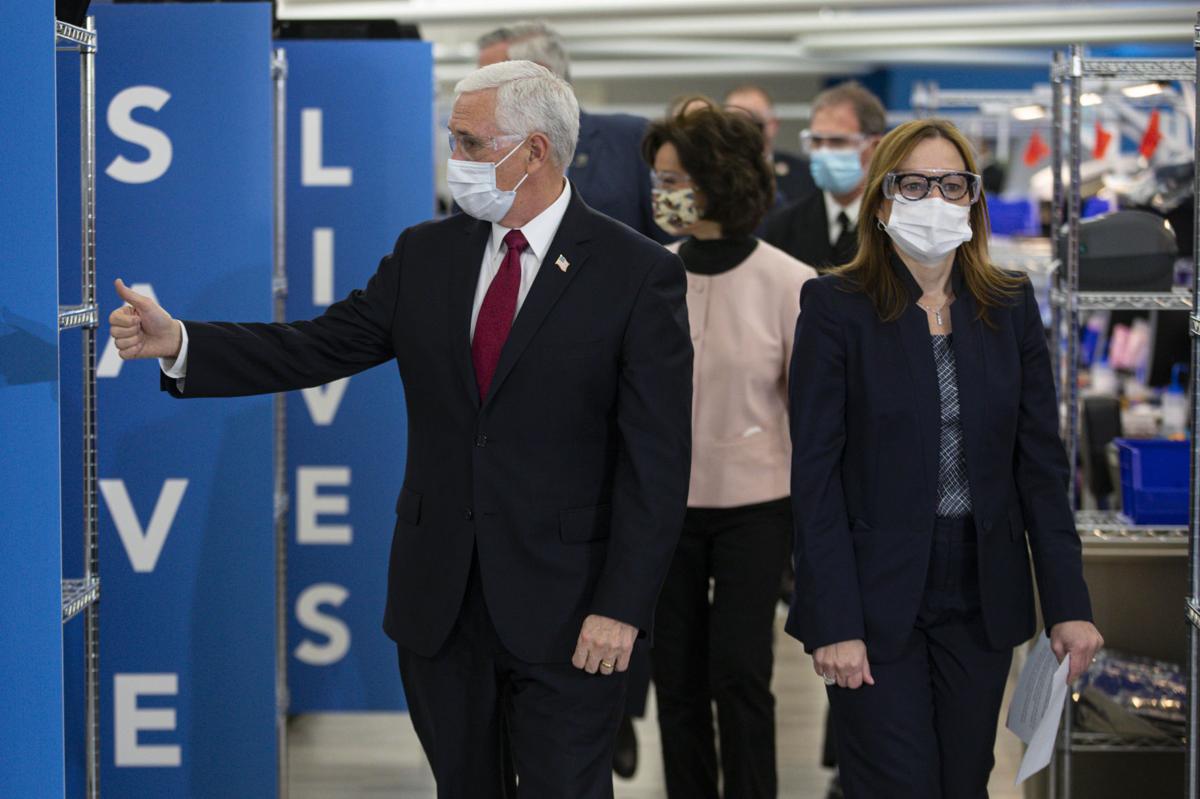 WASHINGTON — This time, he wore a mask.

Vice President Mike Pence donned a face covering Thursday as he toured a General Motors/Ventec ventilator production facility in Indiana after coming under fire for failing to wear one earlier this week in violation of Mayo Clinic policy.

The facility in Kokomo had been closed because of the coronavirus but was brought back online in mid-April to produce critical care ventilators for hospitals around the country. General Motors requires workers to wear masks in the plant's production area, according to spokesman Jim Cain.

Pence removed the mask, however, for a roundtable with top officials, including General Motors CEO Mary Barra and Ventec CEO Chris Kiple. None of the participants wore face coverings.

Pence's visit to the factory came hours after his wife, Karen Pence, defended her husband's decision to not wear a mask during a Tuesday visit to the Mayo Clinic in Rochester, Minnesota.

Mrs. Pence told Fox News Channel that he had been unaware of the hospital’s coronavirus policy during the visit and that the vice president has been following the advice of medical experts. Pence, like other senior White House staff, is tested for the virus at least once a week.

“As our medical experts have told us, wearing a mask prevents you from spreading the disease. And knowing that he doesn’t have COVID-19, he didn’t wear one," Mrs. Pence said, adding that it “was actually after he left Mayo Clinic that he found out that they had a policy of asking everyone to wear a mask.”

“So, you know, someone who's worked on this whole task force for over two months is not someone who would have done anything to offend anyone or hurt anyone or scare anyone,” she said.

The Mayo Clinic had earlier tweeted — then deleted — that it had informed the vice president of its "masking policy prior to his arrival.”

The Centers for Disease Control and Prevention recommends that Americans wear cloth face coverings in public settings where other social distancing measures are difficult to maintain, such as in supermarkets, especially in areas of significant community-based transmission.

President Donald Trump has repeatedly expressed discomfort about mask-wearing, saying he did not intend to wear one when the CDC's recommendations were unveiled. But he said Thursday that he would be open to wearing one when he travels to Arizona next week.

“I'm going to have to look at the climate,” he said, telling reporters, “I'd have no problem wearing a mask.”

Still, he queried reporters about whether it would be appropriate to wear one while delivering a speech.

“Should I speak in the mask?” he asked. "You're going to have to tell me if that's politically correct. I don't know. If it is, I'll speak in a mask.” Trump has openly flouted political norms and taken pride in his political incorrectness.

Footage of Pence’s tour of the Mayo Clinic earlier this week showed him bare-faced as he met with an employee who had recovered from the virus, even though everyone else in the room appeared to be wearing one. He also participated in a roundtable discussion in which every participant, from Food and Drug Administration chief Stephen Hahn to the state's governor, wore a mask except for him.

Pence explained his decision that day by stressing that he has been frequently tested for the virus.

But even with a mask, Pence would have been able to look health care workers in the eye because one only covers the nose and mouth.

Minnesota Gov. Tim Walz, a Democrat who wore a mask while he accompanied Pence on his visit to the Mayo Clinic, said he appreciated seeing that Pence was wearing a mask on his trip to Indiana on Thursday.

“The simple gesture of wearing that mask in public goes an awful long ways,” Walz said.

People who enter the White House complex have their temperature taken, and those who will be in close proximity to the president and the vice president are given rapid COVID-19 tests to ensure they're not infectious.

Senior staff also are given tests on a rolling basis so that infections are quickly detected.

Americans are feeling isolated and anxious. They fear they or their loved ones will get sick. They worry about their jobs.

Hoosiers should find out Friday which industries, retailers and other businesses will be allowed to reopen — and under what conditions.

All residents of Schererville-based Campagna Academy were tested for COVID-19 after an employee of the youth treatment facility was found positive for the virus.

Chicago police to issue citation for another large party

Chicago police officials say they will issue a citation in connection with a wedding party at a North Side residence last week that spilled into the street in violation of efforts to fight the spread of the coronavirus.

Illinois has spent tens of millions of dollars building makeshift field hospitals to prepare for an anticipated flood of coronavirus cases, but so far has not had to use the thousands of extra beds. That was exactly the plan.

The total number of Hoosiers who died after being diagnosed with COVID-19 climbed to more than 1,000, including two newly reported deaths Thursday in Lake County.

An Illinois legislator filed a second legal challenge to Gov. Pritzker’s efforts to discourage the spread of the coronavirus, saying he's seeking a compromise on the statewide stay-at-home order.

Volunteers and organization members have delivered meals to more than 1,000 seniors twice a week.

Law enforcement to ride for free on South Shore trains

South Shore Line is adding police officers and more to a list of those who can ride the train for free.

Those tested positive for COVID-19 may be asked to call the Indiana State Department of Health as a part of a new, centralized contact tracing effort.

The fire department's union president said he is concerned about the city bringing back firefighters prematurely. But the city says they are following federal Centers for Disease Control and Prevention guidelines.

Six more COVID-19 deaths were reported Wednesday in Northwest Indiana, including four in Lake County, one in Porter County and one in LaPorte County.

Boeing to cut 10% of workforce as 1Q revenue, profit slide

Boeing is cutting about 10% of its work force and slowing production of planes to deal with a downturn in business that started with the grounding of its best-selling jet and has accelerated because of the coronavirus pandemic.

Two groups teamed up Wednesday to pass out candy and share uplifting messages to youths during a citywide parade.

Midwest Express Clinic, a chain of urgent care clinics across Northwest Indiana and greater Chicagoland, has rolled out antibody testing for the coronavirus.

As America tentatively emerges from weeks of lockdowns, it is becoming clear that the pandemic has taken its toll on workers who have been on the front lines all along.

Minors locked in cells 23 hours a day amid pandemic 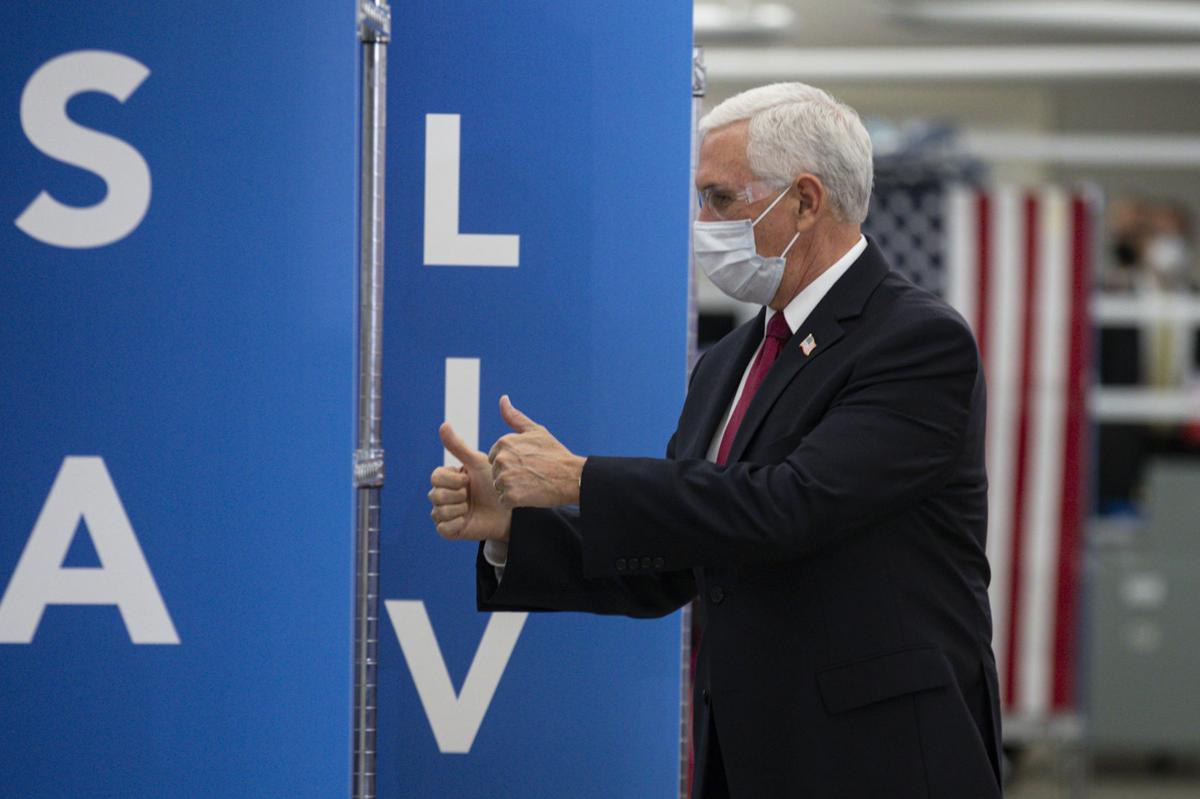 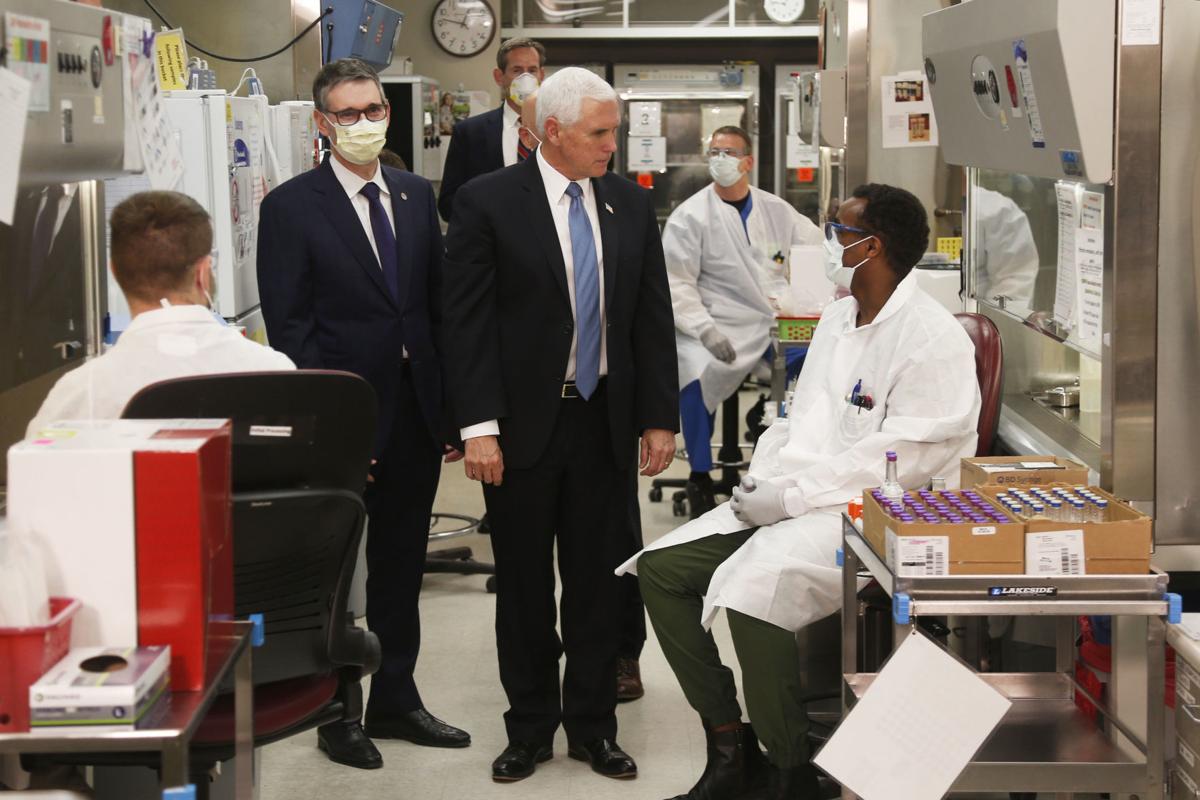 Vice President Mike Pence visits the molecular testing lab at Mayo Clinic Tuesday, in Rochester, Minn., where he toured the facilities supporting COVID-19 research and treatment. Pence chose not to wear a face mask while touring the Mayo Clinic in Minnesota. It's an apparent violation of the world-renowned medical center's policy requiring them.

Indiana Gov. Eric Holcomb waits for the arrival of Vice President Mike Pence aboard Air Force Two at Grissom Air Reserve Base before a visits to the General Motors/Ventec ventilator production facility in Kokomo on Thursday. 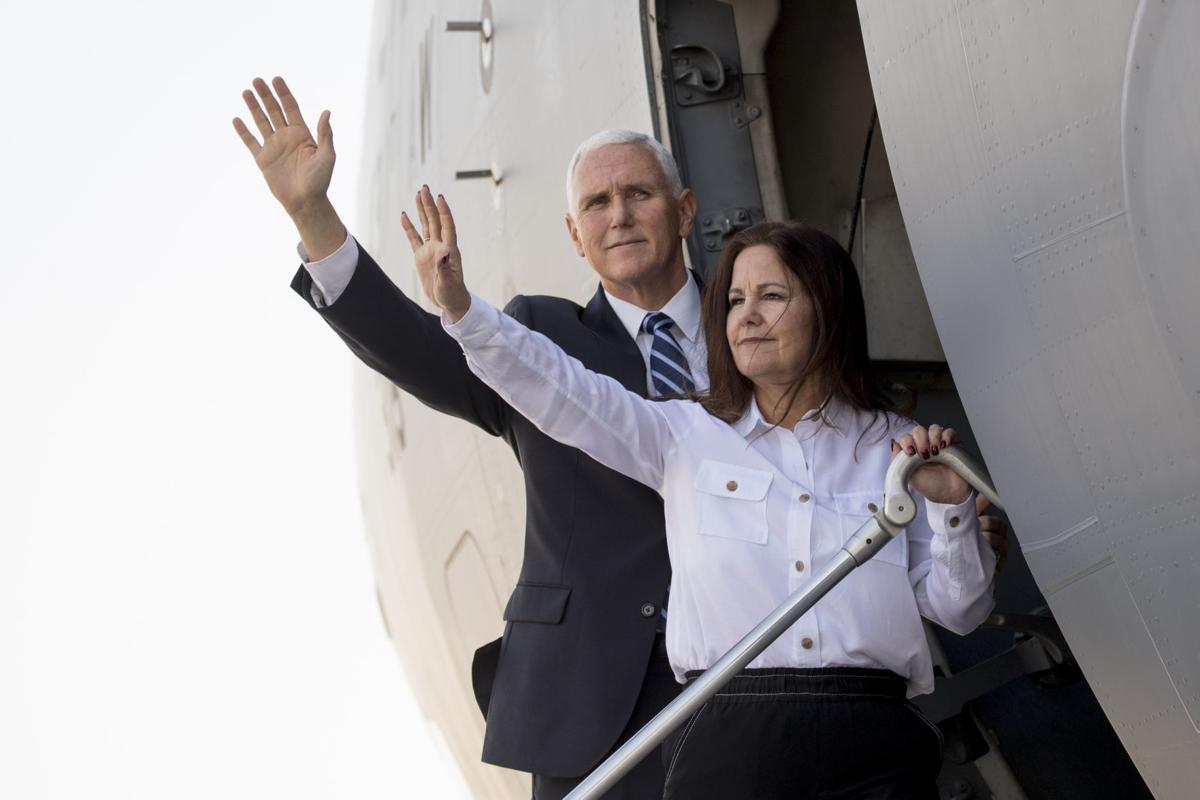 Vice President Mike Pence and his wife Karen Pence board a military cargo jet at Al Asad Air Base, to travel to Erbil, Iraq on Nov. 23. 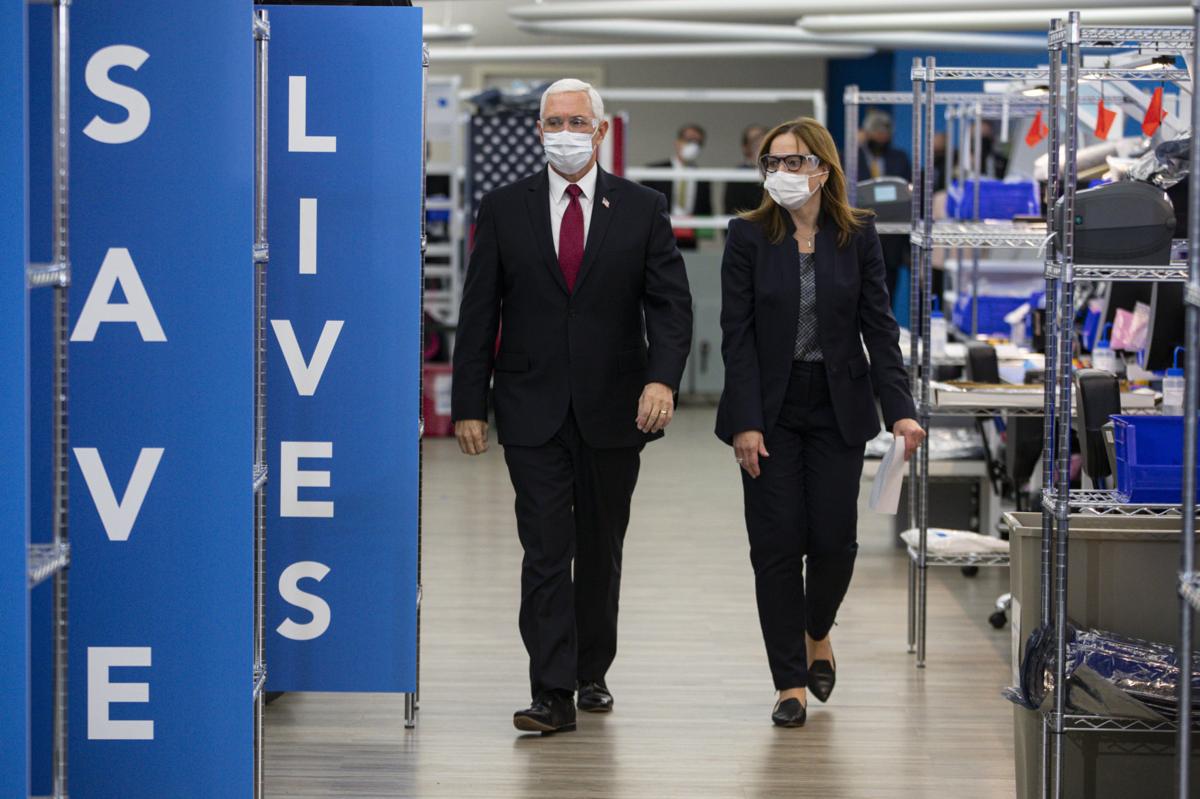