A screenshot of Kash Lee Kelly, 32, of Hammond, shows him during a Facebook live video speaking with his Internet followers after a Jan. 6 insurrection at the U.S. Capitol building. He has been charged by the FBI for his role in the attempted sieg. 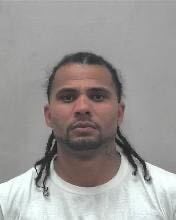 Kash Lee Kelly, pictured in a dated mugshot unrelated to his recent federal charges of entering the U.S. Capitol.

A Hammond man awaiting federal sentencing in a local gang case now is being charged by the FBI after descending upon the U.S. Capitol on Jan. 6 alongside fellow Donald Trump supporters, according to U.S District prosecuting attorney David Nozick.

Kash Lee Kelly, 32, has a pending 2017 Latin Kings gang case against him in U.S. District Court in which he has pleaded guilty. Kelly has admitted to distributing narcotics and marijuana for the Latin Kings gang, and dozens of others have been charged in the wide-sweeping gang case.

A telephone conference hearing was held 10 a.m. Thursday before Magistrate Judge Andrew P. Rodovich on the federal government's motion to revoke his bond in the four-year federal case.

“Obviously, (FBI agents) have a tremendous volume of these (cases), but I have a copy of their affidavit, laying out probable cause," Nozick said Thursday during the federal court case hearing, held virtually due to COVID-19.

In the fallout of the U.S. Capitol Building riots on Jan. 6, the FBI has sought the public’s help in identifying those who participated and/or instigated violence. Since that time, photos have flooded social media and the FBI’s website and several people have been charged.

Kelly is reportedly the first known person from Northwest Indiana to be charged by the feds.

Kelly also been charged under 40 U.S. Code Subsection 5104 (e)(2) and (g), which applies to anyone who enters or remains “on the floor of either House of Congress or in any cloakroom or lobby adjacent to that floor, in the Rayburn Room of the House of Representatives, or in the Marble Room of the Senate, unless authorized to do so pursuant to rules adopted, or an authorization given, by that House; and who (G) parades, demonstrates, or pickets in any of the Capitol Buildings.”

Kelly's sentencing in the federal gang case was scheduled for 9:30 a.m. Feb. 11 before Judge Philip Simon.

The federal government had recommended a 51-month sentence, records show, though they now have the opportunity to rescind that recommendation in light of the release violations, authorities said.

Nozick had argued the violation of Kelly's release, alone, should be enough to revoke his bond ahead of sentencing, but the more serious allegation is the “commission of more federal crimes.”

Nozick said he has seen photographic evidence of Kelly at the Capitol, and he personally received new evidence from a citizen as Thursday's hearing was ongoing — a photo allegedly showing Kelly in D.C. last month.

Nozick said he would be forwarding that to Kelly’s probation officer.

Rodovich granted the government's motion and revoked Kelly’s bond Thursday. Rodovich said Kelly faces up to 10 years additional in prison for committing an offense while on bond, which applies to both misdemeanors and felonies.

Kelly’s attorney, Joshua Adams, was denied a request to allow Kelly to remain out of jail but detained at home while awaiting sentencing. Adams noted Kelly cares for his four children and has a four-year track record of "exemplary" conduct during his pending case.

Born and raised in Hammond, Kelly told The Times on Wednesday he was involved with gangs when he was much younger, and he eventually cut ties with the Latin Kings and "became a pillar" in his community and activist against violence.

Ahead of his bond revocation hearing Thursday, Kelly took to social media sites such as Facebook, YouTube and others, where he has large followings, to explain his case. He argued he thought he had permission to travel to D.C. and that he never engaged in any violence that day.

Kelly, who described himself during a Wednesday interview with The Times as a social media influencer and public speaker who decries groups like Black Lives Matter, appears to appeal to right-leaning extremists and his conservative Internet followers.

In a Wednesday Facebook live interview with the socially conservative organization "BeTheChange," Kelly sought help from the president himself.

"Help your boy out," Kelly said in one video directed at Trump.

He also has sought to raise funds from his followers to fight any legal challenges that may come his way, according to video posted to Facebook.

"'Cause I’m black, I thought I would get a pass like all the other black people who committed crimes this year ..." Kelly said, laughing during the interview.

Letters of support were filed this past summer in Kelly's federal gang case ahead of his sentencing hearing, many of which came from like-minded internet followers who admitted having never met Kelly in person but vouched for his character and anti-violence stance since breaking away from the Latin Kings gang.

When contacted by The Times, Kelly said he condemns anyone who engaged in violence Jan. 6 at the Capitol.

Kelly said all he did was enter the Capitol, snap a photo near a monument and left before the violence erupted. His claims could not be independently verified by The Times.

Kelly said he appeared as a guest speaker Oct. 17 at a Porter County Republican Party "Freedom Rally" in downtown Valparaiso and was even being considered as an up-and-coming political candidate for local office by the party.

Porter County Republican Party Chairman Mike Simpson said this week he was only vaguely aware of Kelly’s legal woes, but believes in second chances and welcomed him to speak.

“My issue is not with his past,” Simpson said.

Rather, Simpson said he is concerned about Kelly’s role in last week’s pro-Trump rally in Washington that resulted in six people dying, including two police officers.

“Those people are criminals, and I don’t want any part of those people,” he said, calling the behavior of those who stormed the Capitol “reprehensible.”

While on the phone with The Times on Wednesday, Kelly stepped away for a brief moment and returned to say probation had called him.

While Kelly declined to share what was said on the phone call, he offered this: "Nobody might hear from me tomorrow. That's all I'm going to say."

Less than 24 hours later, Kelly's bond was revoked, and he was charged by the FBI.

Police said nine months after the shooting death of the 12-year-old boy, no one has come forward with information leading to the suspect.

NWI man will be returned to D.C. to face Capitol riot charges

A screenshot of Kash Lee Kelly, 32, of Hammond, shows him during a Facebook live video speaking with his Internet followers after a Jan. 6 insurrection at the U.S. Capitol building. He has been charged by the FBI for his role in the attempted sieg.

Kash Lee Kelly, pictured in a dated mugshot unrelated to his recent federal charges of entering the U.S. Capitol.