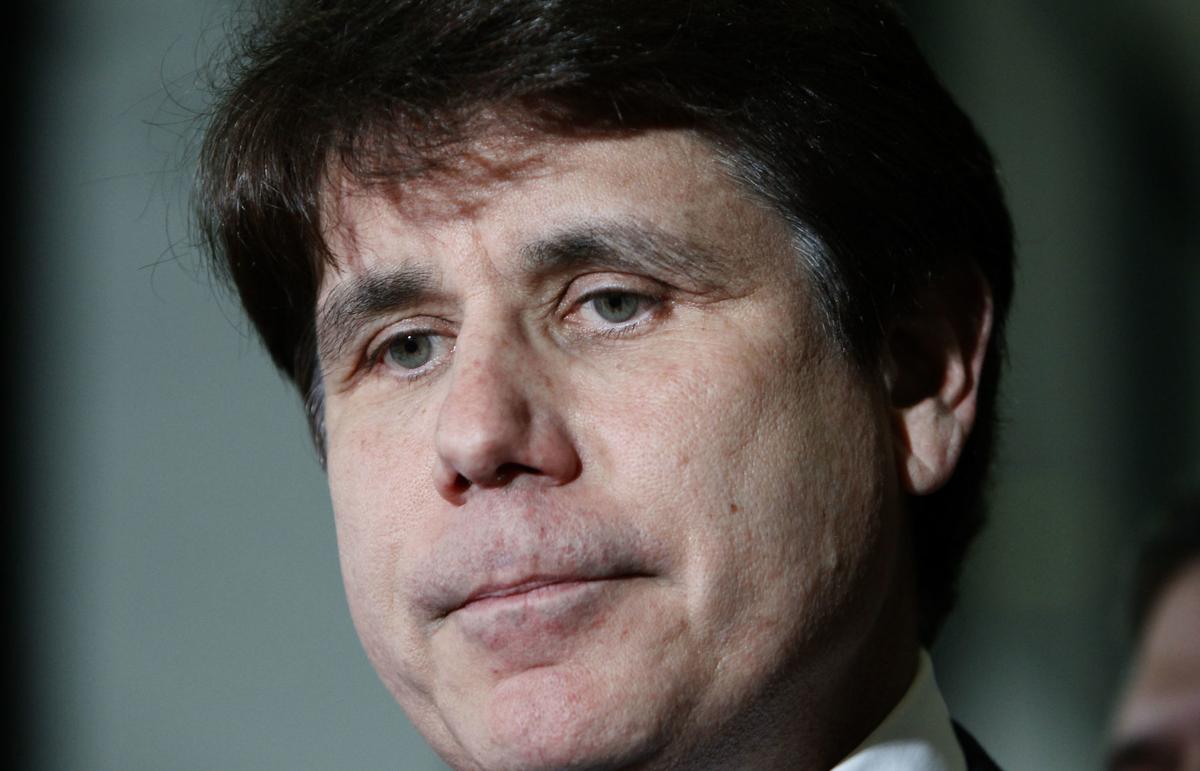 Former Illinois Gov. Rod Blagojevich pauses as he talks with reporters at the Federal Court building after the judge handed the case to the jury in his corruption trial in Chicago on June 9, 2011. 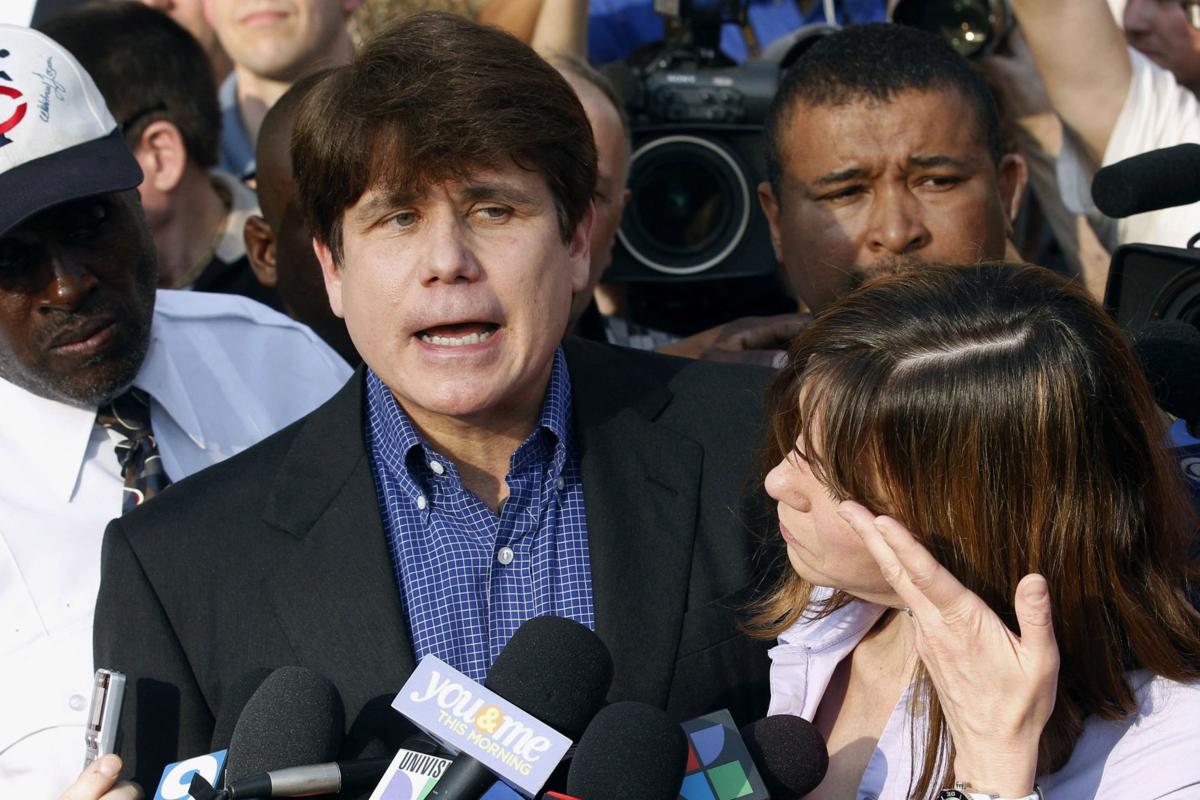 Former Illinois Gov. Rod Blagojevich speaks to the media outside his home in Chicago as his wife, Patti, wipes away tears a day before reporting to prison after his conviction on corruption charges on March 14, 2012. 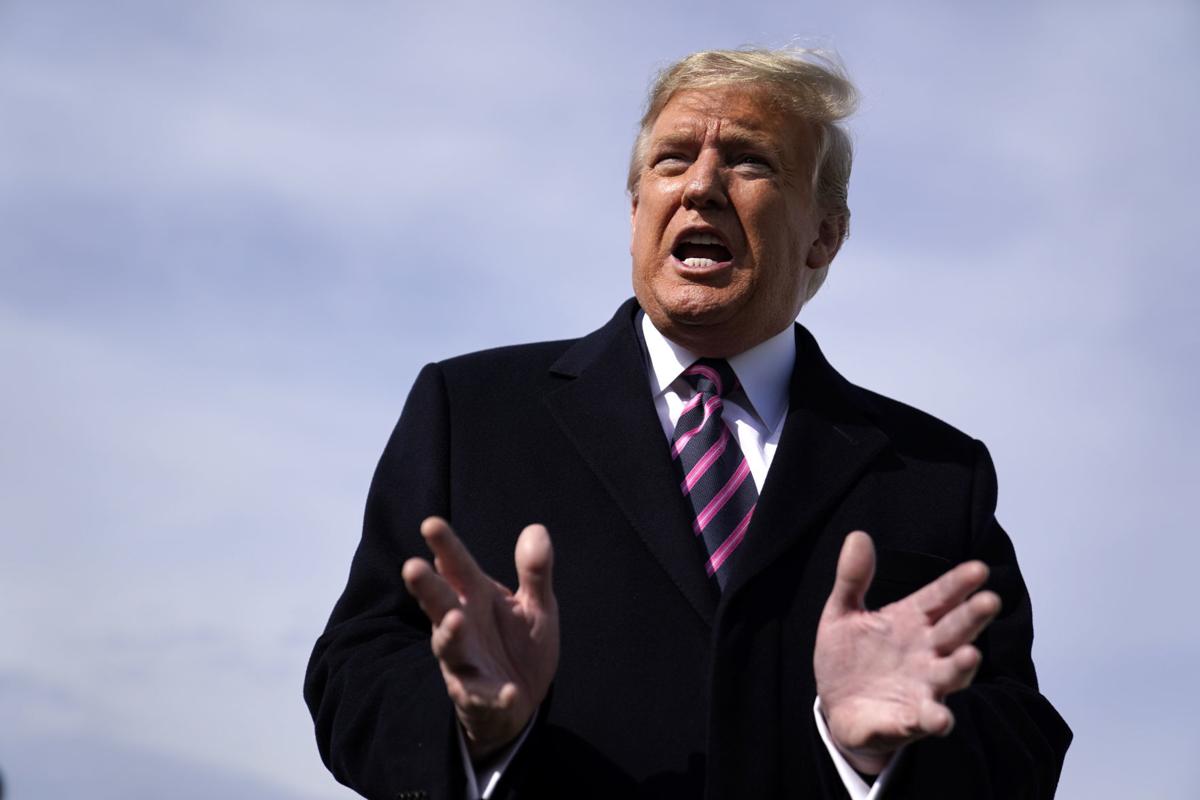 President Donald Trump talks to the media before he boards Air Force One for a trip to Los Angeles to attend a campaign fundraiser, Tuesday, Feb. 18, at Andrews Air Force Base, Md. 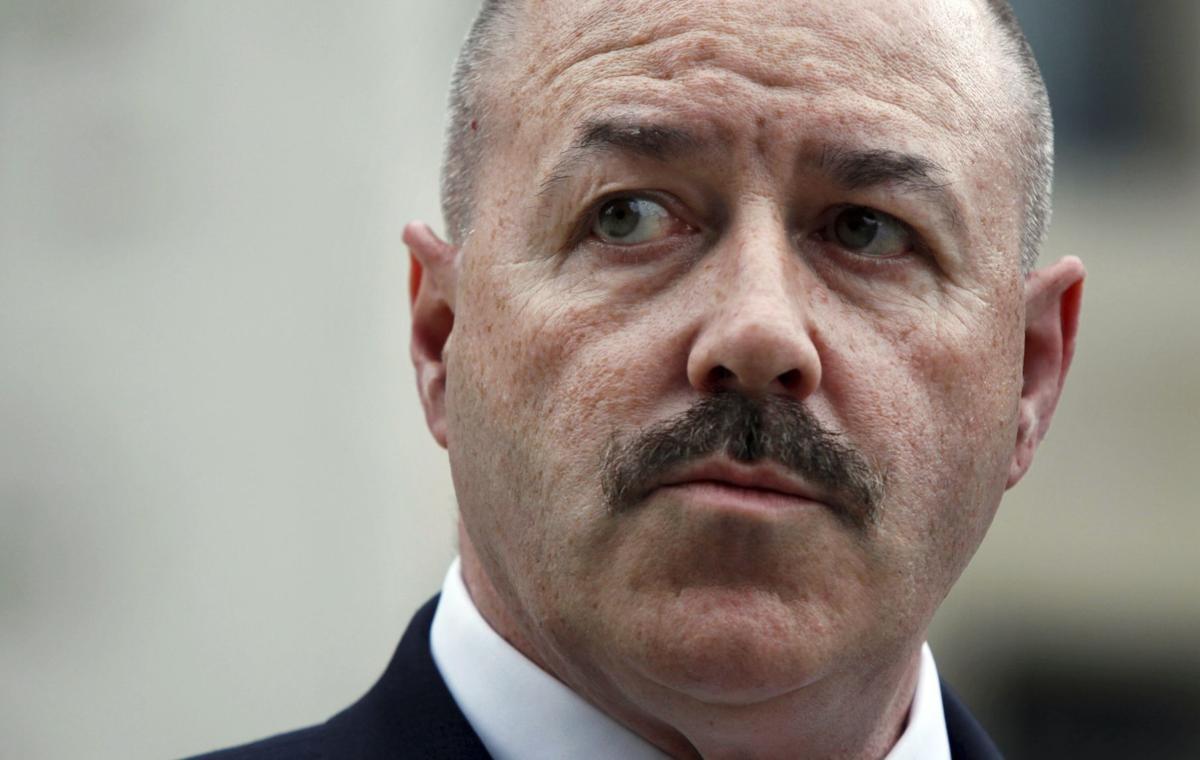 The Republican president said the punishment imposed on the Chicago Democrat and one-time contestant on Trump's reality TV show "Celebrity Apprentice" was excessive.

"So he'll be able to go back home with his family," Trump told reporters in Washington. "That was a tremendously powerful, ridiculous sentence in my opinion and in the opinion of many others."

Blagojevich, 63, was convicted in 2011 of crimes that included seeking to sell an appointment to Barack Obama's old Senate seat and trying to shake down a children's hospital.

Trump had said repeatedly in recent years that he was considering taking executive action in Blagojevich's case, only to back away from the idea.

One of Blagojevich lawyers said she refused to believe it at first when word of her client's possible release began to spread, fearing that the president might not follow through.

"When it became obvious it was real, I got tears in my eyes," said Lauren Kaesberg. "It was overwhelming."

Others in Illinois, including the governor, said setting Blagojevich free was a mistake.

Trump "has abused his pardon power in inexplicable ways to reward his friends and condone corruption, and I deeply believe this pardon sends the wrong message at the wrong time," Gov. J.B. Pritzker said in a written statement.

"In a state where corrupt, machine-style politics is still all too common, it's important that those found guilty serve their prison sentence in its entirety," said the the chairman of the Illinois GOP, Tim Schneider.

The White House cited support from several Illinois-based leaders, including the Rev. Jesse Jackson, as supporting Blagojevich's early release. More than 100 of his fellow inmates also sent in letters of support.

Trump made clear that he saw similarities between efforts to investigate his own conduct and those who took down Blagojevich.

"It was a prosecution by the same people — Comey, Fitzpatrick, the same group," Trump said. He was referring to Patrick Fitzgerald, the former U.S. attorney who prosecuted Blagojevich and now represents former FBI Director James Comey, whom Trump fired from the agency in May 2017.

Trump also granted clemency to financier Michael Milken, who served two years in prison in the early 1990s after pleading guilty to violating U.S. securities laws, and pardoned former New York Police Commissioner Bernie Kerik, who served just over three years for tax fraud and lying to the White House while being interviewed to be Homeland Security secretary.

The Illinois House in January 2009 voted 114-1 to impeach Blagojevich, and the state Senate voted unanimously to remove him, making him the first Illinois governor in history to be removed by lawmakers. He entered prison in March 2012.

After exhausting his last appeal in 2018, Blagojevich seemed destined to remain behind bars until his projected 2024 release date. His wife, Patti, went on a media blitz in 2018 to encourage Trump to step in, praising the president and likening the investigation of her husband to special prosecutor Robert Mueller's probe into Russian meddling in the 2016 election — a probe Trump long characterized as a "witch hunt."

At Blagojevich's home, his wife's sister, Deb Mell, emerged onto the porch after a rideshare driver arrived to deliver food. She said the logistics of the former governor's return were not complete and that Patti Blagojevich would not speak to reporters until her husband is home.

"The kids are overjoyed and Patti's ecstatic," Mell said.

Blagojevich's conviction was notable, even in a state where four of the last 10 governors have gone to prison for corruption. Judge James Zagel — who sentenced Blagojevich to the longest prison term yet for an Illinois politician — said when a governor "goes bad, the fabric of Illinois is torn and disfigured."

After his Dec. 9, 2008, arrest while still governor, Blagojevich became known for his foul-mouthed rants on wiretaps. On the most notorious recording, he gushed about profiting by naming someone to the seat Obama vacated to become president: "I've got this thing and it's (expletive) golden. And I'm just not giving it up for (expletive) nothing."

Prosecutors have balked at the notion long promoted by Blagojevich that he engaged in common political horse-trading and was a victim of an overzealous U.S. attorney. After Blagojevich's arrest, Fitzgerald said the governor had gone on "a political corruption crime spree" that would make Abraham Lincoln turn over in his grave.

A joint statement from Fitzgerald and the lead prosecutors at Blagojevich's trial, none of whom work in the U.S. Attorney's Office in Chicago anymore, stopped short of criticizing Trump's decision. But they highlighted the convictions, including for trying to shake down the children's hospital, saying, "Mr. Blagojevich remains a felon."

Mueller — a subject of Trump's derision — was FBI director during the investigation into Blagojevich. Fitzgerald is now a private attorney for Comey, whom Trump dismissed from the agency in May 2017.

Trump expressed some sympathy for Blagojevich when he appeared on "Celebrity Apprentice" in 2010, before his first corruption trial started. When Trump "fired" Blagojevich as a contestant, he praised him for how he was fighting his criminal case, telling him, "You have a hell of a lot of guts."

He later poll-tested the matter, asking for a show of hands of those who supported clemency at an October 2019 fundraiser at his Chicago hotel. Most of the 200 to 300 attendees raised their hands, The Wall Street Journal reported, citing several people at the event.

On the same day, Trump told Chicago television station WLS that Blagojevich should not abandon hope of an early release.

Blagojevich's first trial ended with the jury unable to reach a verdict, except for a single conviction, for lying to the FBI.

At his second trial in 2011, Blagojevich testified, describing himself as a flawed dreamer grounded in his parents' working-class values. He sought to humanize himself to counteract the seemingly greedy governor heard on wiretap recordings played in court. He said the hours of FBI recordings were the ramblings of a politician who liked to think out loud.

He was convicted on 18 counts. The 7th U.S. Circuit Court of Appeals in Chicago in 2015 tossed out five of the convictions, including ones in which he offered to appoint someone to a high-paying job in the Senate.

The appeals court ordered the trial judge to resentence Blagojevich but suggested it would be appropriate to hand him the same sentence, given the gravity of the crimes. Blagojevich appeared via live video from prison during the 2016 resentencing and asked for leniency. The judge gave him the same 14-year term, saying it was below federal guidelines when he imposed it the first time.

SPRINGFIELD, Ill. — Illinois Gov. Bruce Rauner, who swept into office four years ago as a self-made millionaire and an outsider promising fisc…

Rod Blagojevich gushed about Donald Trump Wednesday, a day after the Republican president commuted his sentence for political corruption.

2-year lobbying effort pays off in freedom for Blagojevich

When Patti Blagojevich made repeated public pleas for her husband's release from federal prison, there was no mistaking her intended audience: President Donald Trump.

The ruling came after commission attorneys reminded the board about some of the things that led to Blagojevich's conviction on corruption charges and 14-year prison sentence.

The court's decision was hardly a surprise and Blagojevich, whose license was suspended indefinitely after his 2008 arrest, did not fight to regain it.

Former Illinois Gov. Rod Blagojevich pauses as he talks with reporters at the Federal Court building after the judge handed the case to the jury in his corruption trial in Chicago on June 9, 2011.

Former Illinois Gov. Rod Blagojevich speaks to the media outside his home in Chicago as his wife, Patti, wipes away tears a day before reporting to prison after his conviction on corruption charges on March 14, 2012.

President Donald Trump talks to the media before he boards Air Force One for a trip to Los Angeles to attend a campaign fundraiser, Tuesday, Feb. 18, at Andrews Air Force Base, Md.