CHICAGO — Officials across the country curtailed many elements of American life to fight the coronavirus outbreak on Sunday, with health officials recommending that groups of 50 or more don't get together and a government expert saying a 14-day national shutdown may be needed.

Governors and mayors closed restaurants, bars, and schools as the nation sank deeper into chaos. Travelers returning home from abroad were stuck in line for hours at major airports for screenings, crammed into just the kind of crowded spaces that public health officials have urged people to avoid.

Restaurants switch to carryout and delivery only: 'It's a scary time for small businesses and service workers'

In a sign of impending economic gloom, the Federal Reserve slashed its benchmark interest rate to near zero. President Donald Trump sought to calm a jittery nation by declaring the government has “tremendous control” over the situation and urging people to stop the panic buying of grocery staples that has depleted store shelves nationwide. Gun stores started seeing a similar run on weapons and ammunition as the panic intensified.

As Americans struggled with changing their daily habits, the Centers for Disease Control and Prevention issued a dramatic recommendation: Because large events can fuel the spread of the disease, it said gatherings of 50 people or more should be canceled or postponed throughout the country for the next eight weeks. It added that, at any event, people should take proper precautions, including handwashing and keeping one's distance.

But in a sign of the difficulty of striking the right balance, the CDC statement also said the recommendation does not apply to “the day to day operation of organizations such as schools, institutes of higher learning, or businesses.”

Even before the warning, parts of the country already look like ghost towns, and others are about to follow as theme parks closed, beaches shooed away spring breakers and states and large cities ordered bars and restaurants shuttered.

"The time for persuasion and public appeals is over,” Illinois Gov. J.B. Pritzker said. “This is not a joke. No one is immune to this.”

“These places are part of the heart and soul of our city. They are part of what it means to be a New Yorker," he said in a statement Sunday night. “But our city is facing an unprecedented threat, and we must respond with a wartime mentality.”

His decision came after Dr. Anthony Fauci, the federal government's top infectious disease expert, said he would like to see a 14-day national shutdown imposed to prevent the virus's spread.

“I think Americans should be prepared that they are going to have to hunker down significantly more than we as a country are doing,” said Fauci, a member of the White House task force on combating the spread of coronavirus. He heads the National Institute of Allergy and Infectious Diseases at the National Institutes of Health.

There is no indication Trump is considering such a move.

The worldwide outbreak has sickened nearly 170,000 people and left more than 6,500 dead, with thousands of new cases confirmed each day. The death toll in the United States climbed to 64, while infections passed 3,700.

Meanwhile, state and local officials rained harsh criticism on Trump and his administration over long lines of returning international passengers at some U.S. airports.

Chicago Mayor Lori Lightfoot lambasted the administration for allowing about 3,000 Americans returning from Europe to be stuck for hours inside the customs area at O'Hare International Airport on Saturday, violating “social distancing” recommendations from the Centers for Disease Control and Prevention.

The passengers, many of them rushing home over fears they would be stuck in Europe, were screened for coronavirus symptoms before they were allowed to leave the airport.

Long lines also formed Saturday in Boston, Dallas and others of the 13 airports accepting return flights from Europe.

“People were forced into conditions that are against CDC guidance and are totally unacceptable,” Lightfoot said.

Elizabeth Pulvermacher, a University of Wisconsin student, arrived Saturday at O'Hare from Madrid, where she had been studying, and spent hours in line. The customs process made her feel “unsafe," she said.

“The whole idea is getting rid of the spread of coronavirus, but there were hundreds and hundreds of people in very close proximity,” Pulvermacher said.

Dr. Robert Murphy, executive director of Institute for Global Health at Northwestern University, said he was “appalled” by what he saw Saturday at nearby O'Hare.

“If they weren’t exposed to COVID-19 before, they probably are now. From a public health perspective, this is malpractice,” Murphy said in a statement Sunday. “The lack of preparation and concern is unfathomable.”

But the situation improved markedly Sunday. Acting Homeland Security Secretary Chad Wolf said waits were down to 30 minutes after processes were adjusted to better handle the influx and extra personnel were sent to the selected airports.

Bailey Miles, a 20-year-old sophomore at Taylor University in Indiana, arrived also from Madrid fearing the worst, but she got through customs and a health screening in about an hour. She said officials seemed to have learned their lesson from Saturday, when some of her friends returned.

"The employees were really helpful, had positive attitudes and had a lot of grace," she said. She said a woman even passed out snacks.

“They wanted 50 people at a time. So the first 50 people got off, and they asked us to keep a large distance between ourselves,” she said.

Going forward, Wolf said he could not rule out a halt to air travel within the U.S. Fauci said earlier Sunday on television that halting domestic travel had been discussed, though not seriously.

For most people, the coronavirus causes only mild or moderate symptoms, such as fever and cough. For some, especially older adults and people with existing health problems, it can cause more severe illness, including pneumonia. The vast majority of people recover.

And that may have given some people false hope, causing them to venture into crowds that Fauci and others would prefer they avoid. Even if someone doesn't become visibly ill, they can still carry the disease and spread it to others.

Not all government officials were concerned. Oklahoma's Republican Gov. Kevin Stitt tweeted a picture of himself and his children at a crowded metro restaurant Saturday night. Republican Rep. Devin Nunes had a similar message on Fox News Channel's Sunday Morning Futures, encouraging people to go to local restaurants and pubs despite the warnings of health officials.

In New Orleans and Chicago, people clad in green for St. Patrick's Day packed bars and spilled onto crowded sidewalks on Saturday even after the cities canceled their parades.

New York City announced its public school district, the nation's largest, will be closed starting Monday, joining most of the rest of the country. De Blasio had originally balked, but under pressure from Gov. Andrew Cuomo and others he said Sunday, "I became convinced over the course of today that there is no other choice.”

Starbucks said Sunday it is closing seating in its cafes and patio areas nationwide, but customers can still order takeaway.

In Florida, Walt Disney World and Universal-Orlando closed Sunday night for the rest of the month, joining their already closed California siblings. Farther south, Miami Beach and Fort Lauderdale closed their beaches, where thousands of college spring breakers flocked. The cities also ordered restaurants and bars closed by 10 p.m. and to keep crowds below 250.

“We cannot become a petri dish for a very dangerous virus,” Miami Beach Mayor Dan Gelber said. “Spring break is over. The party is over.”

The RV industry in Indiana is watching what kind of impact the coronavirus may have on the market.

County acts to protect juveniles in detention, courts against COVID-19

In-person visits are on hold at the Porter County Juvenile Detention Center and other outside contact with the center and court have been curtailed in an attempt to curb exposure to the coronavirus.

Public buildings like Hammond City Hall and the Sportsplex will be closed and police will strictly enforce Gov. Eric Holcomb's executive order that limits gatherings to 50 people or less to prevent the spread of COVID-19.

Most of the libraries are waiving late fees and adjusting due dates during the closures.

State officials declined to postpone the election despite concerns about low turnout because of the outbreak of COVID-19, the disease caused by the coronavirus.

Coronavirus fears fuel spike in sales of guns and ammunition

"This is self-preservation. This is panic. This is ‘I won’t be able to protect my family from the hordes and the walking dead.'"

The victim was a Chicago woman in her 60s who had an underlying health condition and had extended contact with another infected person, officials said. 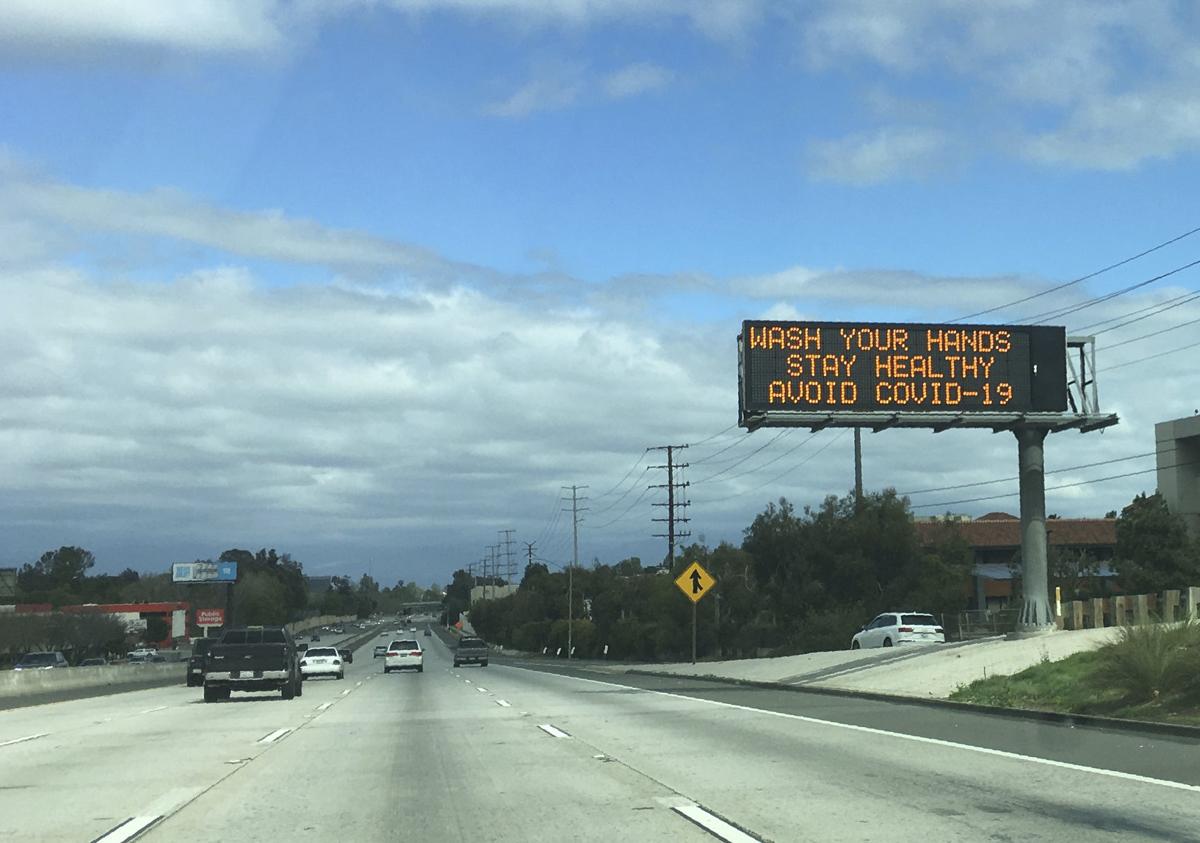 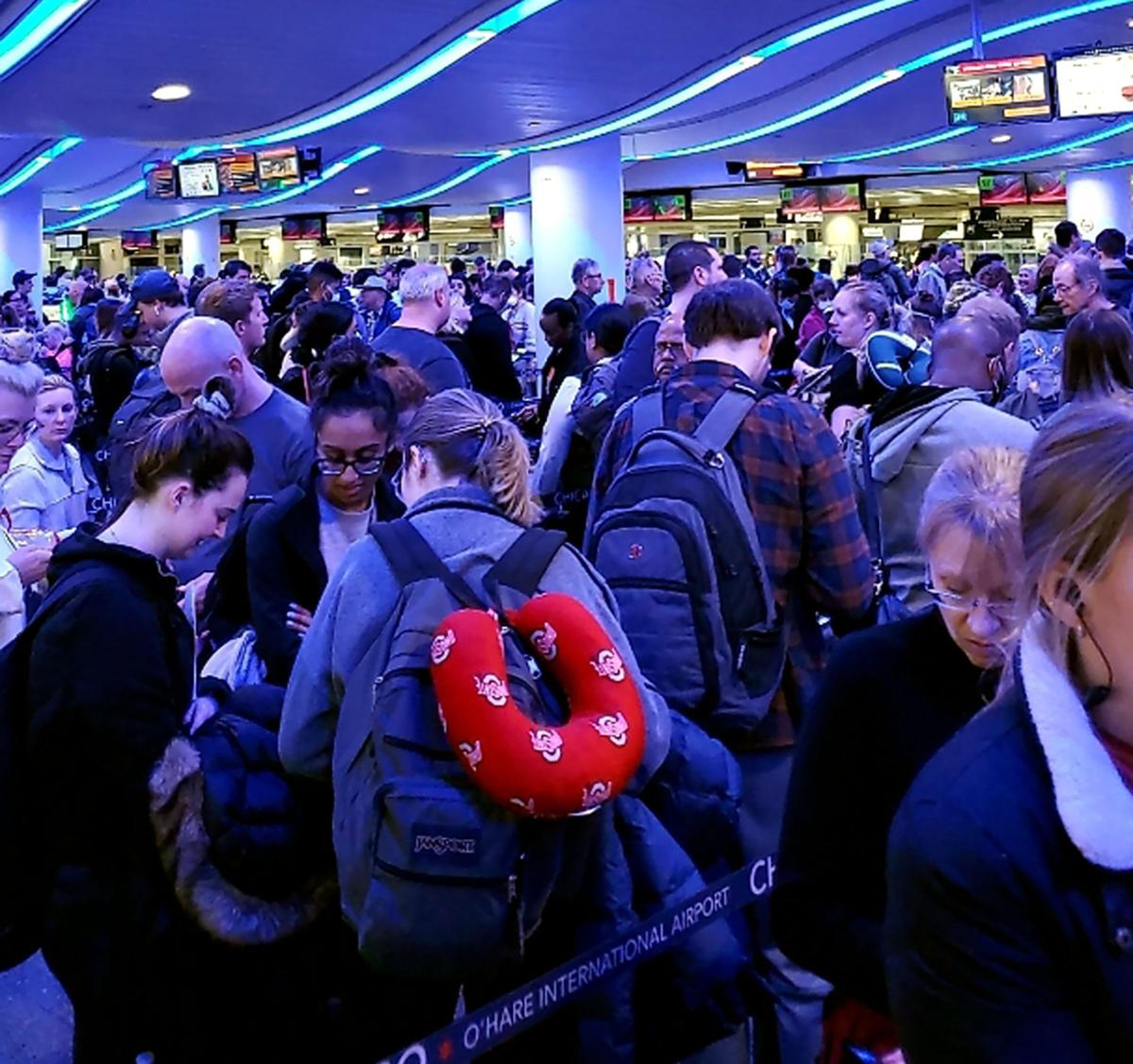 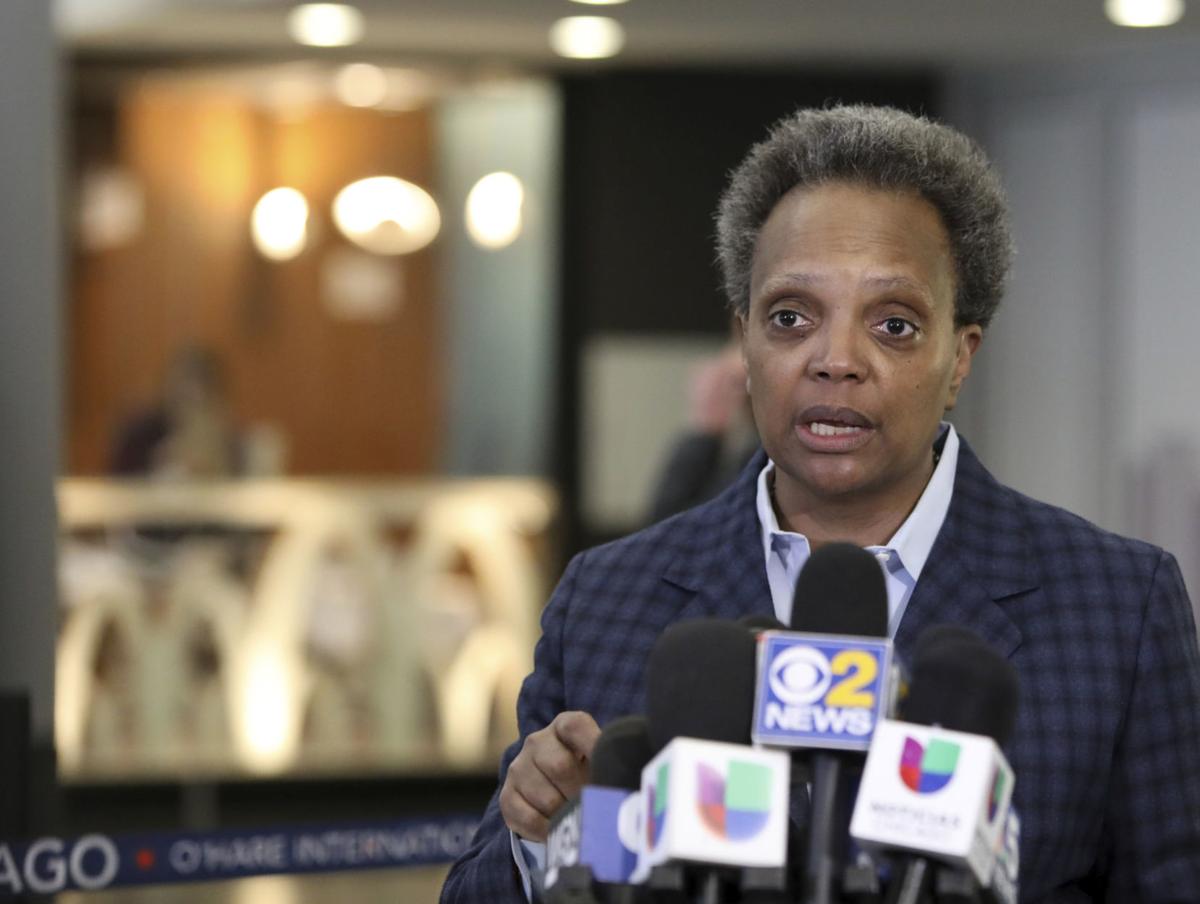 Chicago Mayor Lori Lightfoot speaks to reporters Sunday, March 15, 2020, at O'Hare International Airport. Harsh criticism rained on the Trump administration from state and local officials over long lines of returning international passengers at some U.S. airports that could have turned them into coronavirus carriers as they tried to get home. Mayor Lightfoot lambasted the administration for allowing about 3,000 Americans returning from Europe to be stuck for hours inside the customs area at O'Hare International Airport on Saturday, violating federal recommendations that people practice “social distance." (AP Photo/Teresa Crawford) 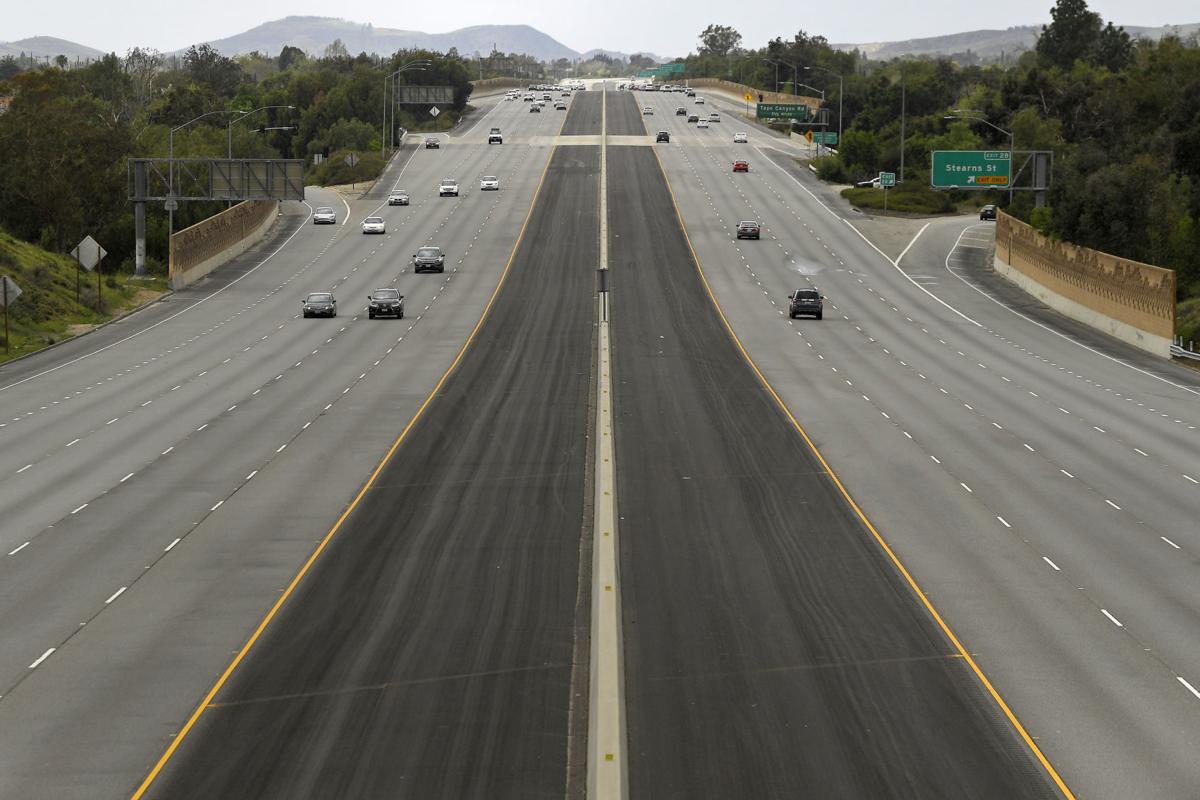 CORRECTS LOCATION TO SIMI VALLEY, INSTEAD OF SIM VALLEY - Light traffic is seen in the afternoon on the 118 Ronald Reagan freeway, Sunday, March 15, 2020, in Simi Valley, Calif. The highway is usually much busier on a Sunday afternoon. (AP Photo/Mark J. Terrill) 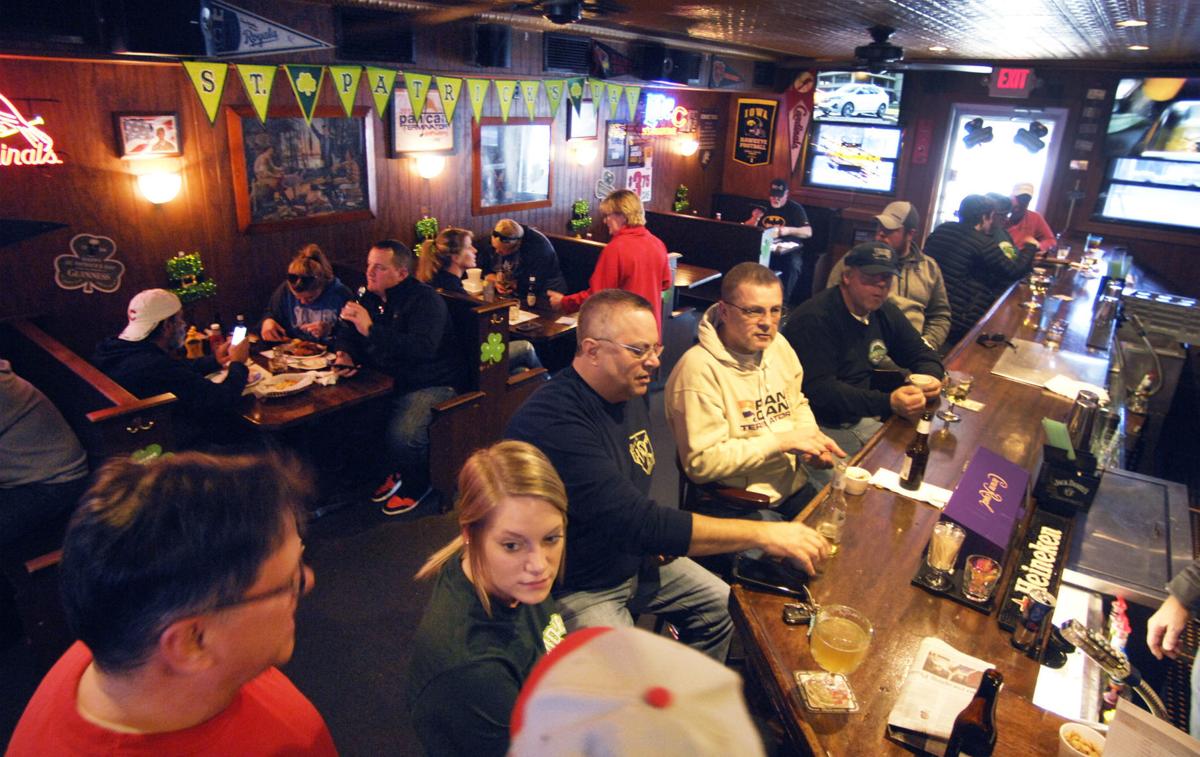 Customers eat and drink at Schooners, in Bloomington, Sunday, March 15, 2020, after Illinois Gov. JB Pritzker announced that dine-in service would be halted in restaurants and bars across Illinois. 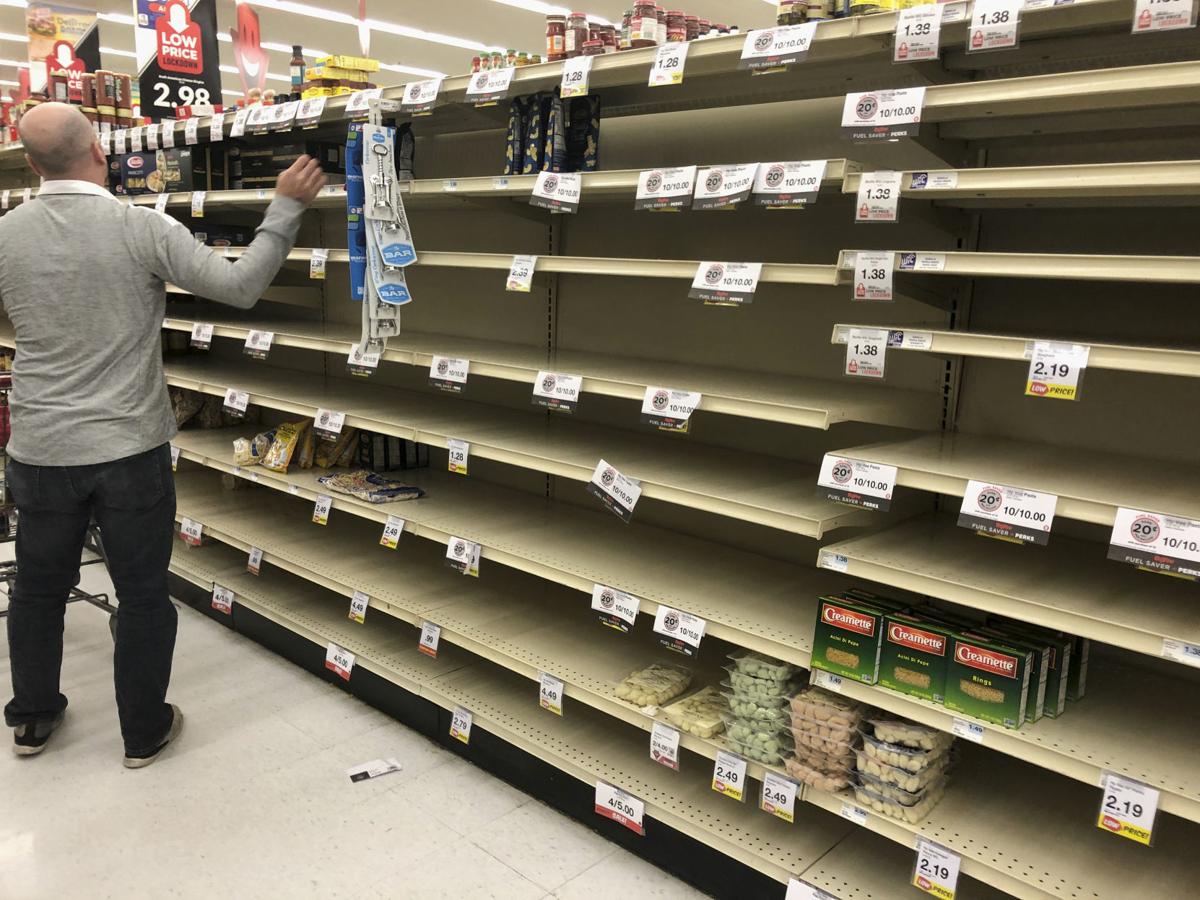 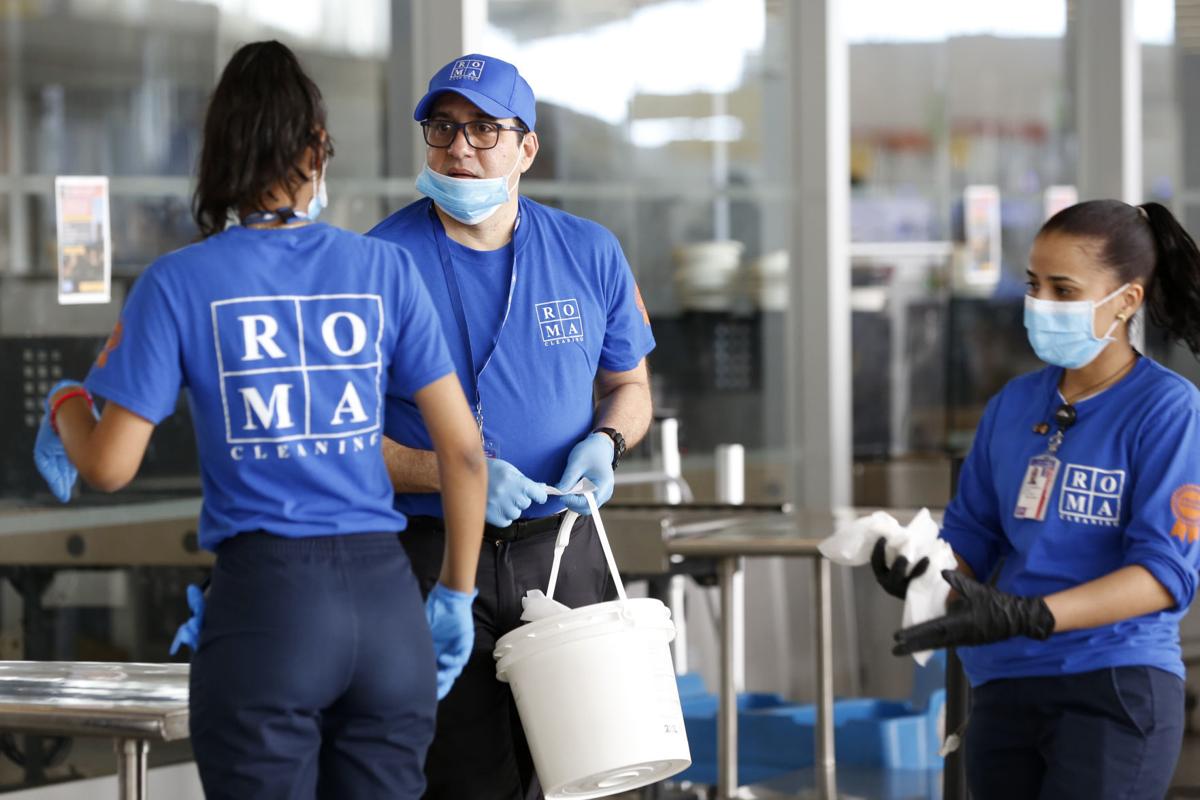 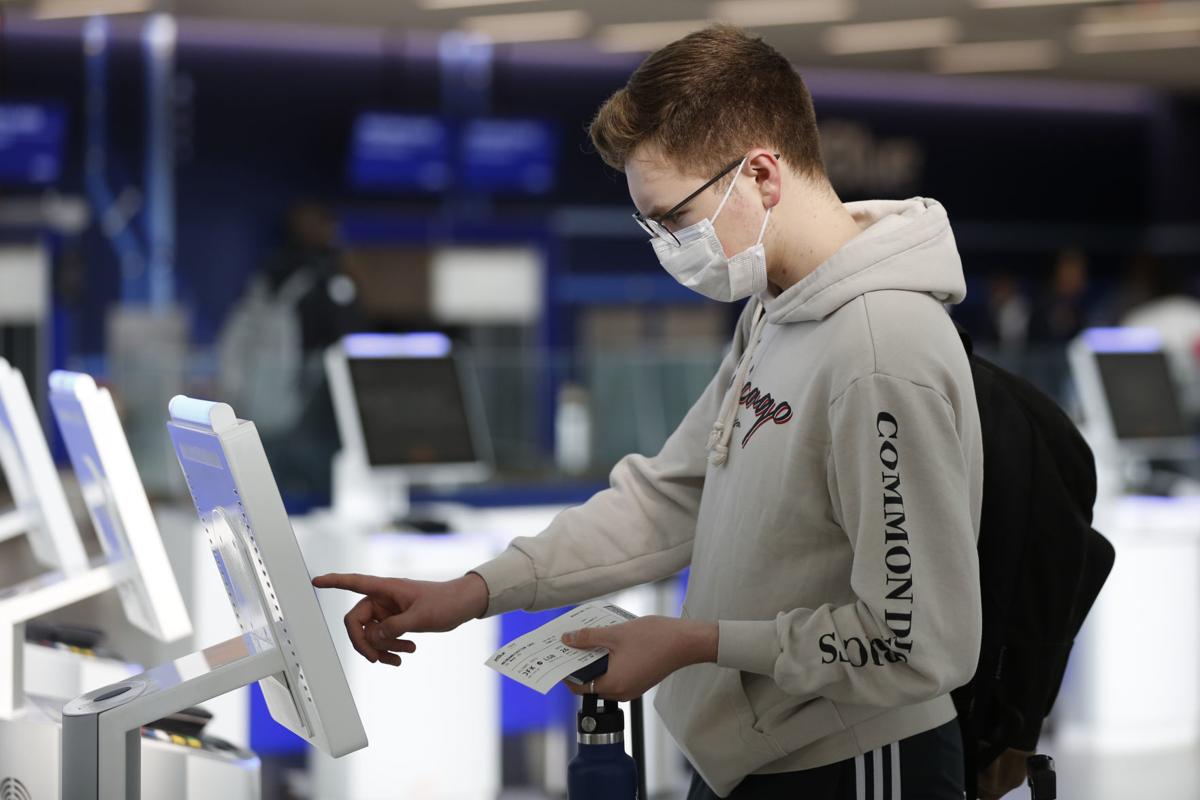 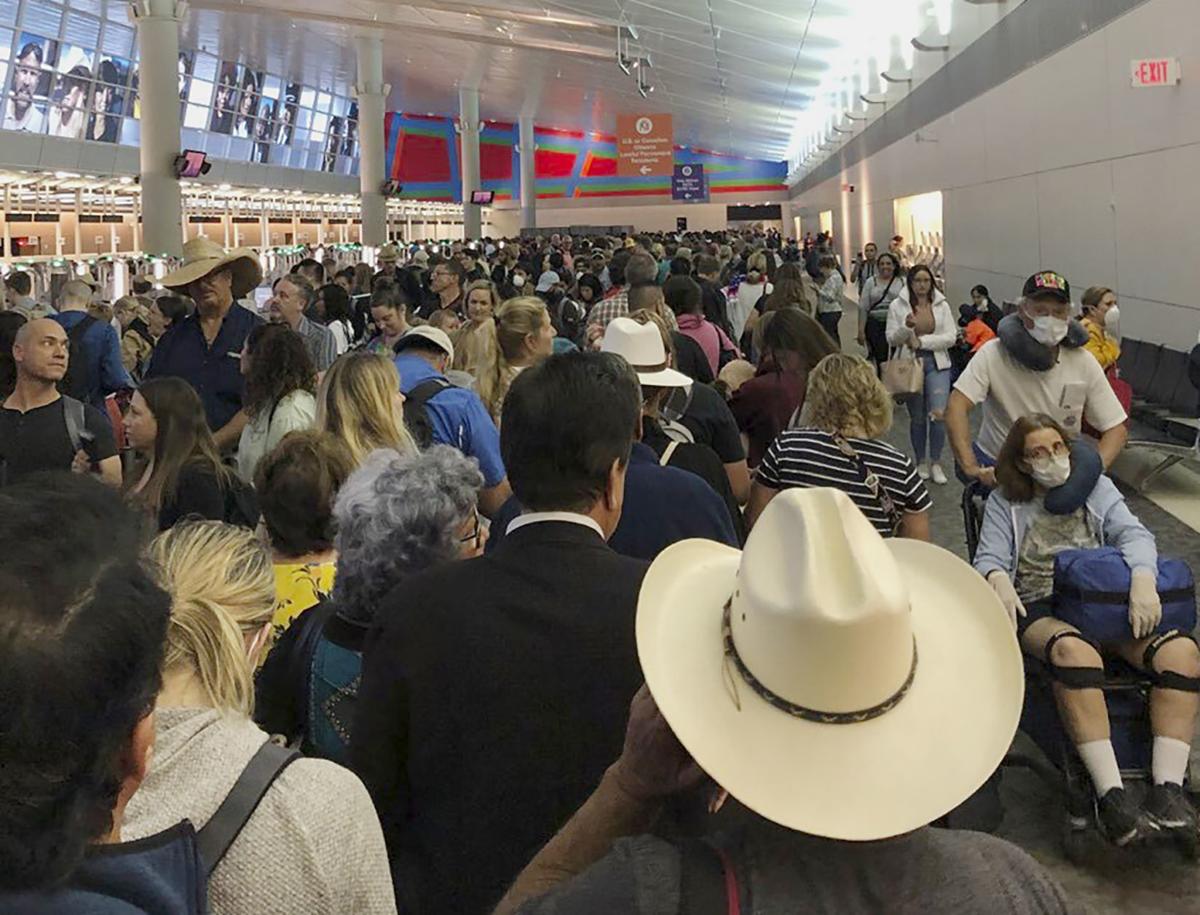 In this photo provided by Austin Boschen, people wait in line to go through the customs at Dallas Fort Worth International Airport in Grapevine, Texas, Saturday, March 14, 2020. 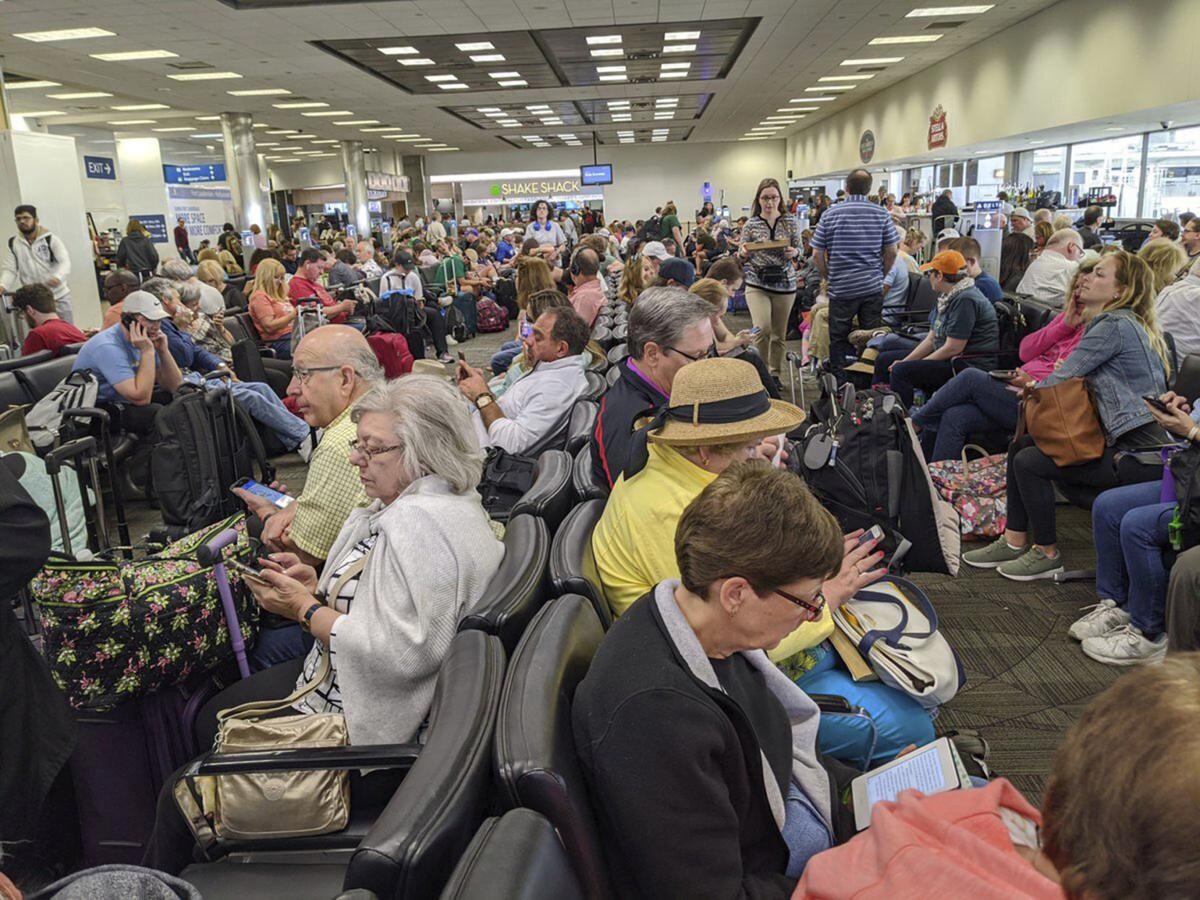