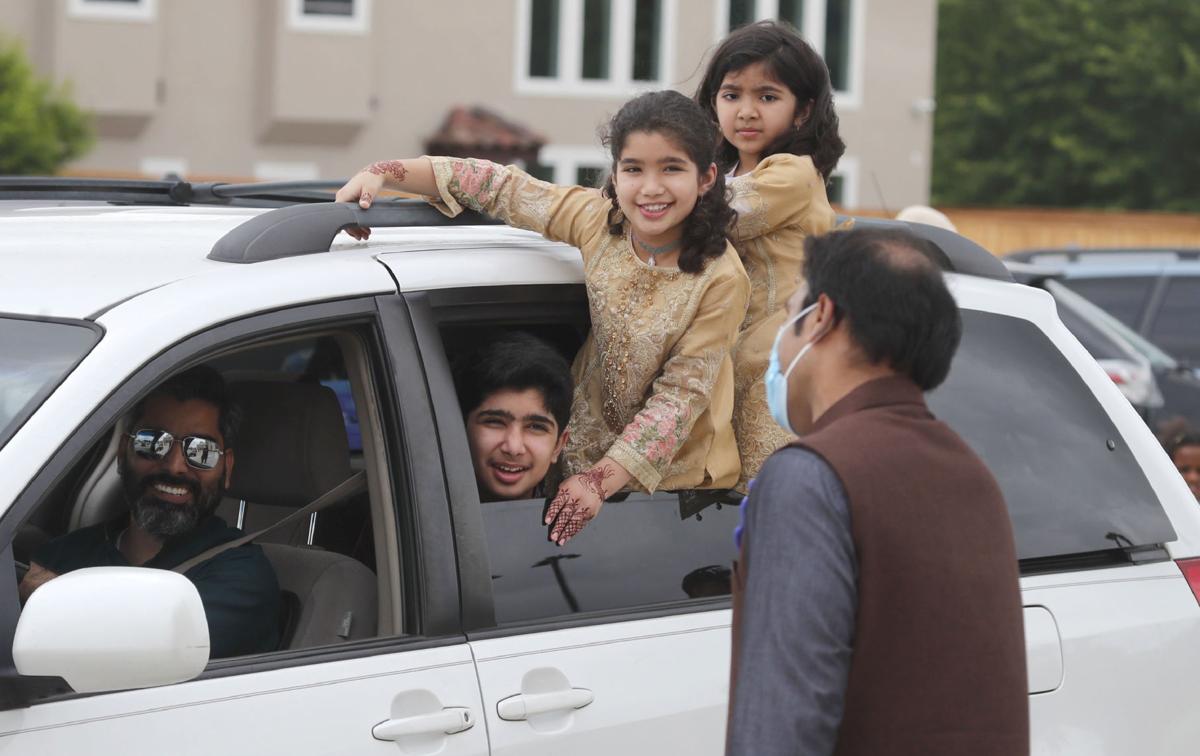 A family looks out from their vehicle during an Eid al-Fitr drive through celebration outside a closed mosque in Plano, Texas, Sunday. 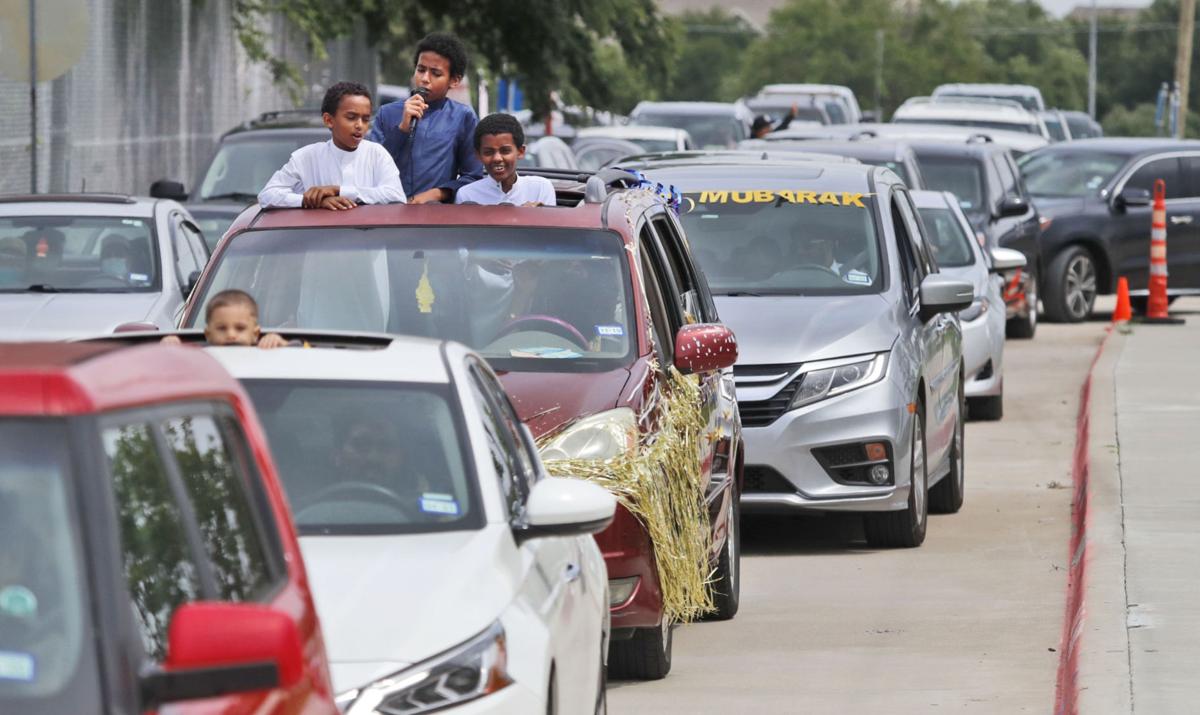 Children use a speaker to pray while waiting with others during a drive-through Eid al-Fitr celebration outside a closed mosque in Plano, Texas, Sunday.

WINTER PARK, Fla. — With no congregational prayers or family gatherings, Salsabiel Mujovic has been worried that this year’s Eid al-Fitr celebration will pale. Still, she’s determined to bring home holiday cheer amid the coronavirus gloom.

Her family can’t go to the mosque, but the 29-year-old New Jersey resident bought new outfits for herself and her daughters. They are praying at home and having a family photo session. The kids are decorating cookies in a virtual gathering, and popping balloons with money or candy inside — a twist on a tradition of giving children cash gifts for the occasion.

“We’re used to, just like, easily going and seeing family, but now it’s just like there’s so much fear and anxiety,” she said. “Growing up, I always loved Eid. ... It’s like a Christmas for a Muslim.”

Like Mujovic, many Muslims in America were navigating balancing religious and social rituals with concerns over the virus as they look for ways to capture the Eid spirit this weekend.

Eid al-Fitr — the feast of breaking the fast — marks the end of Ramadan, when Muslims abstain from food and drink from sunrise to sunset. Just like they did during Ramadan, many are resorting to at-home worship and relying on technology for online gatherings, sermons and, now, Eid entertainment.

This year, some Muslim-majority countries have tightened restrictions for the holiday which traditionally means family visits, group outings and worshippers flooding mosques or filling public spaces.

“We don’t want to have gatherings and congregations,” Sheikh Yasir Qadhi, who prepared the council’s fatwa, or religious edict, said in an interview. “We should try to keep the spirit of Eid alive, even if it’s just in our houses, even if we just decorate our houses and wear our finest for each other.”

While some are eager for mosques to re-open, Qadhi said, “We don’t want to be a conduit for the situation exacerbating. We need to think rationally and not emotionally.”

The North Texas Imams Council, of which he is a member, has recommended mosques remain closed. He said he expected the majority of mosques to stay closed to the public, though he worries about smaller mosques re-opening.

On Sunday, Qadhi, resident scholar at East Plano Islamic Center in Texas, and just a few others chanted “Allahu Akbar” from a mosque that he said remained closed to worshippers. Normally, it would have been packed with thousands of believers.

“Today we are celebrating Eid like we have never celebrated before,” Qadhi said in a sermon streamed online. “It’s an atypical celebration but it is a celebration nonetheless.”

He reflected on lessons such as appreciating blessings once taken for granted.

“It’s gonna be an Eid for the books" but "we have to make the best of this Eid,” he said after the sermon. Outside, cars—some with giggling kids looking out of windows—snaked around the mosque for a drive-through celebration to pick up goody bags.

Guidelines posted online included worshippers bringing their own prayer rugs, wearing mandatory masks and praying next to their cars while staying at least six feet apart. Participants were told not to hug or shake hands.

States give few details on billions spent on virus supplies

“Eid is important but more important is the health of the people,” said Maulana Abdulrahman Patel, the imam. “We’ve been taking a lot of precautions,” and not acting on “sentiments or emotional feelings,” he said before the holiday, adding they have been consulting with health and other officials.

Major Jacob Ruiz, the major of administration at Osceola County Sheriff’s Office, said he and the sheriff had met with Patel before Eid. “Everybody was in agreement that it’s going to be something that’s gonna be successful for them,” he added before the start of the holiday.

The Muslim community in the county “has been very receptive and proactive in ensuring that they keep safety guidelines,” he said.

The Masjid Taqwa prayer was open for men only, the mosque said, citing “constraints.” Plans for men-only prayers announced by at least one other mosque have prompted objections by some about excluding women. For Masjid Taqwa, the decision to include just men was taken because having families together would make crowd control more difficult, Patel said.

Also Sunday, the Islamic Community Center of Phoenix held four Eid prayers, said its president, Usama Shami. “It went better than we expected," he said. Precautions included taping over spots where people may set their prayer rugs to keep a safe distance and offering masks to those who want them, he said. Additional guidelines the center posted online included sterilizing hands before entering the mosque and not congregating inside after the prayer. A video of worshippers showed some in masks and some not.

The center started re-opening for some prayers during Ramadan, Shami said, adding that at the time this sparked “a couple of negative” online comments from the Muslim community.

“It’s just to keep people connected,” he said. Normally, Eid is an all-day celebration with large gatherings over meals and a carnival for kids, he added. “Eid is a huge thing here.”

Back in New Jersey on the holiday’s eve, Mujovic and two of her daughters joined friends and others online to decorate cookies. Squeezing icing out and spreading it on cookies shaped like Ramadan lanterns or spelling out the word “EID,” the girls stopped to lick their fingers or munch on the treats.

As children waved, squealed and showed off their creations, it started to feel like Eid for Mujovic. “It was nice seeing happy faces,” she said.

From Zooming, streaming and Facebook-living to drive-thru services, here’s a visual look at how Region churches have been weathering the COVID…

Lake County Commissioner Michael C. Repay said the recent pandemic, which has shut down county government, reminds him of what he has yet to accomplish.

Town Manager Craig Phillips said if the town moves forward with any programming, it will be abbreviated, probably lasting a month.

Both universities are waiving application fees in light of the novel coronavirus pandemic. Here's what you need to know to apply:

Mayor Jerome Prince said he worries Gary's beaches will have exceptionally large crowds due to residents in Illinois venturing to Indiana this holiday weekend.

Work is scheduled to resume on May 26, but the restart date could be pushed back depending on how the situation with the virus unfolds.

Thousands of gallons of milk to be distributed weekly in Gary, mayor says

At noon on Saturday, residents of Northwest Indiana can pick up two to three gallons of milk, based on family size.

Most of Indiana will move to stage 3 of Gov. Eric Holcomb's plan for reopening the state's economy at 11:01 p.m. Region time Thursday. Stage 3 begins June 1 in Lake County.

Here's who's opening their doors to diners this week as coronavirus restrictions ease.

Pritzker's stay-at-home order, issued in mid-March due to the COVID-19 pandemic, is expected to be eased on May 29 for all of the state except Chicago

A family looks out from their vehicle during an Eid al-Fitr drive through celebration outside a closed mosque in Plano, Texas, Sunday. 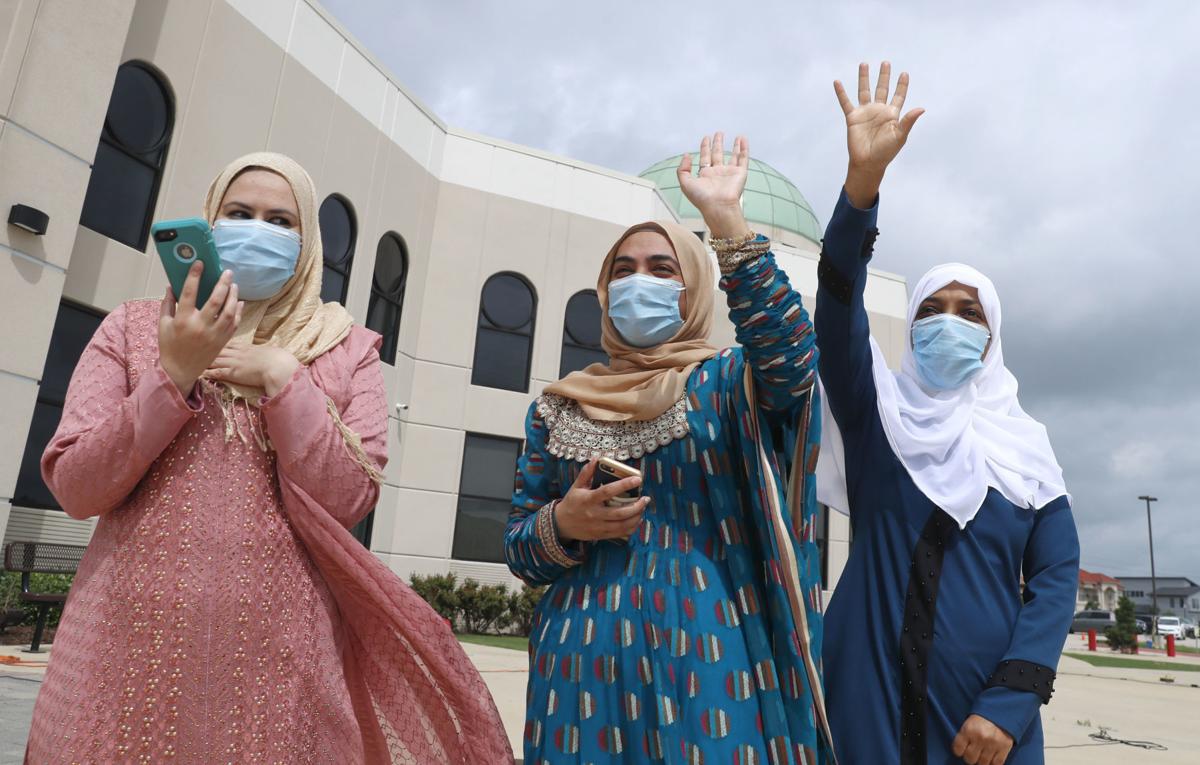 Saba Mahjabeen, right, and Gizman Mawi, center, waive as Sophia Baig looks on during a drive through Eid al-Fitr celebration outside a closed mosque in Plano, Texas, Sunday. 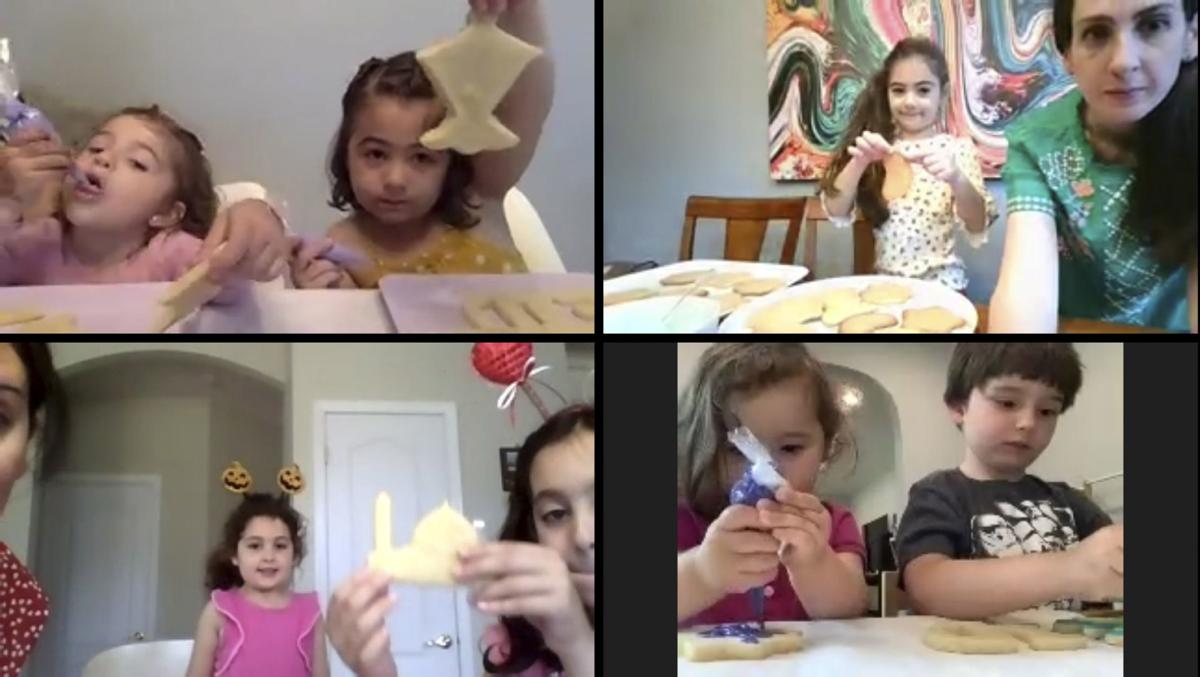 Liyana Mujovic, 2, and her sister Suhaila, 5, top left, decorate cookies for Eid al-Fitr with a group of friends while celebrating the end of Ramadan on May 23, 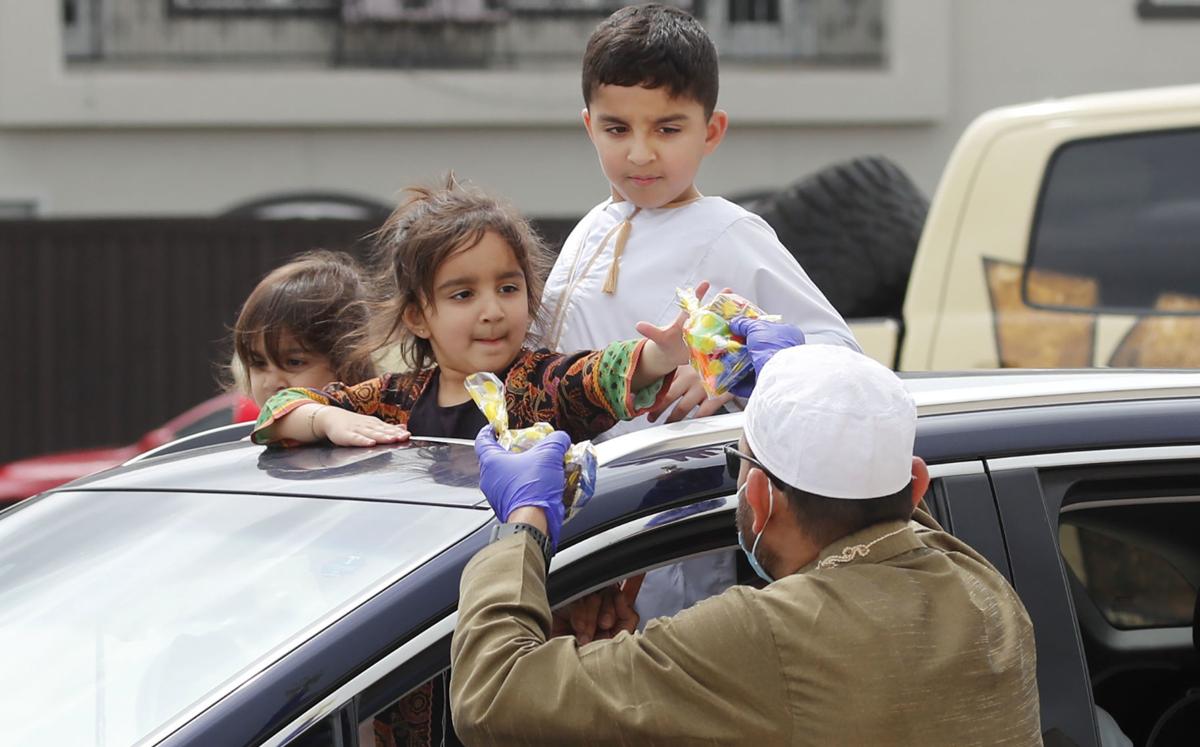 Children receive candy during an Eid al-Fitr drive through celebration outside a closed mosque in Plano, Texas, Sunday, May 24. 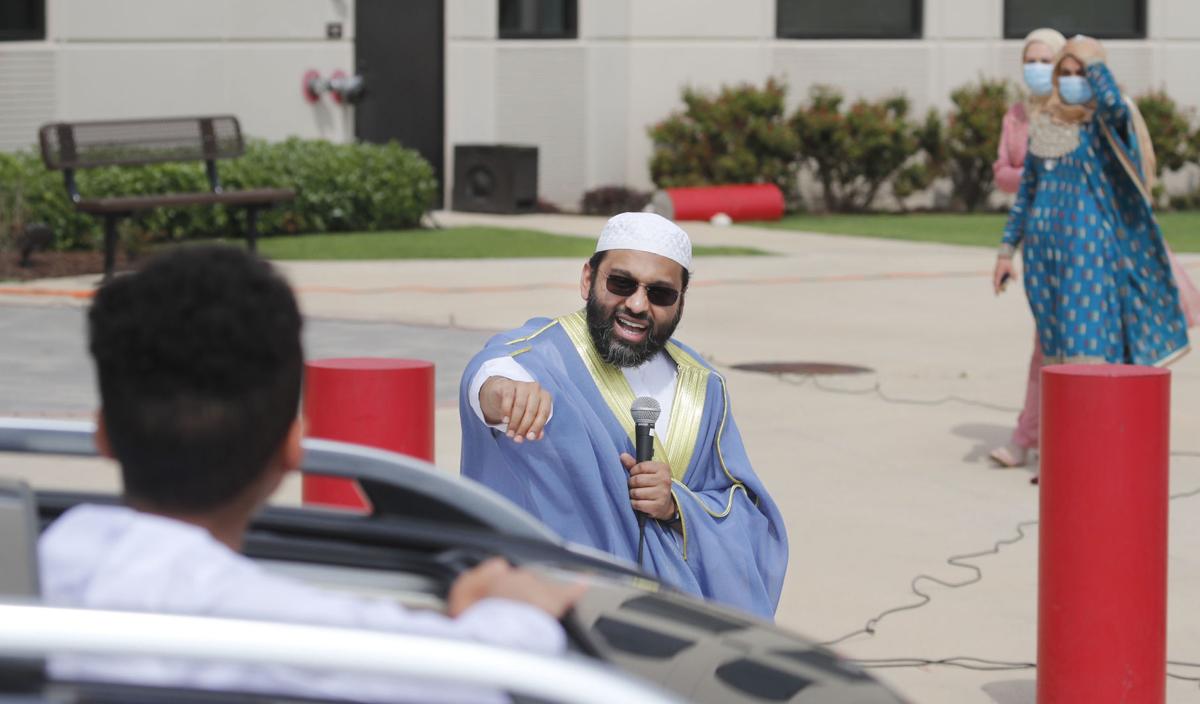 Sheikh Yasir Qadhi, center, speaks to a passing child during an Eid al-Fitr drive through celebration outside a closed mosque in Plano, Texas, Sunday. 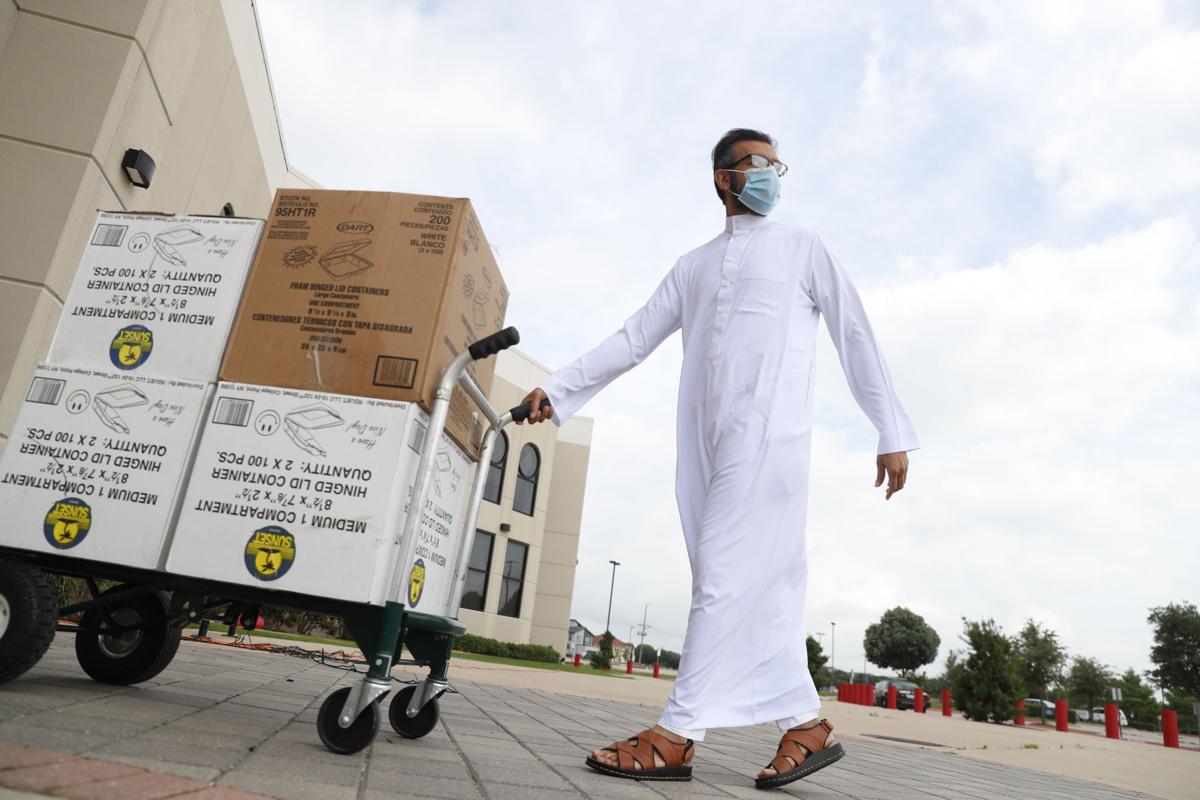 Saher Khan rolls boxes of treats to hand out during a drive-through Eid al-Fitr celebration outside a closed mosque in Plano, Texas, Sunday.

Children use a speaker to pray while waiting with others during a drive-through Eid al-Fitr celebration outside a closed mosque in Plano, Texas, Sunday. 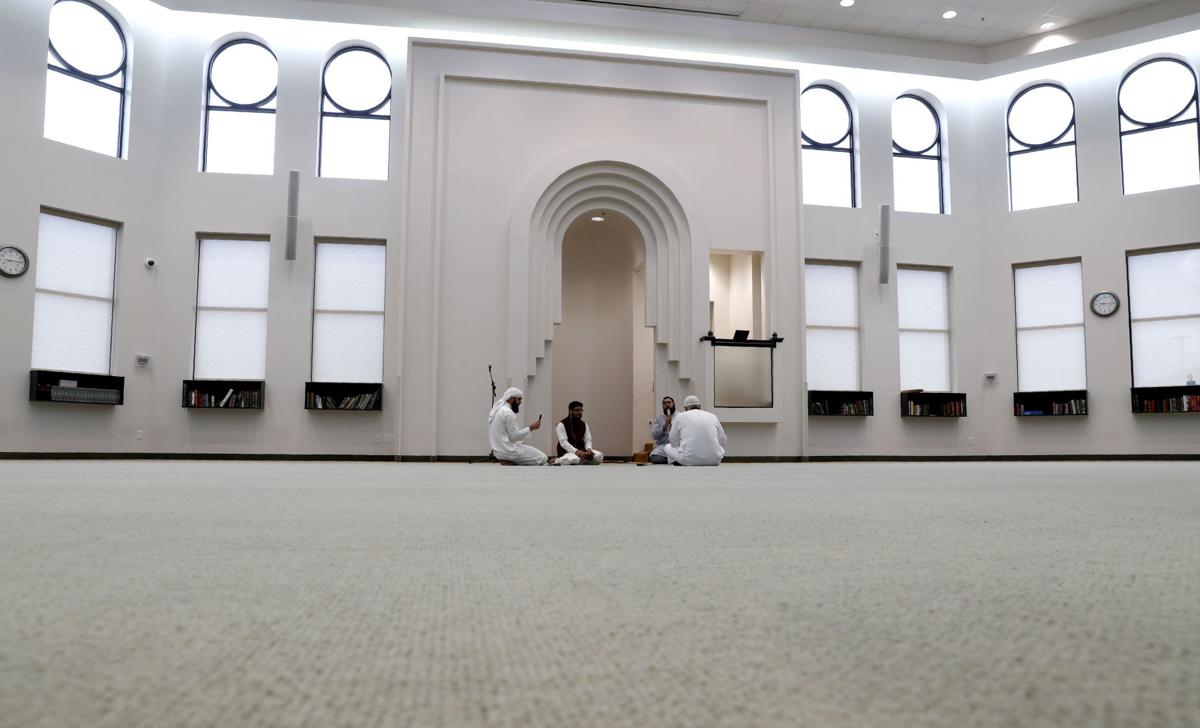 Amid concerns of the spread of COVID-19, a small group prays inside an empty mosque before an Eid al-Fitr celebration in Plano, Texas, Sunday. 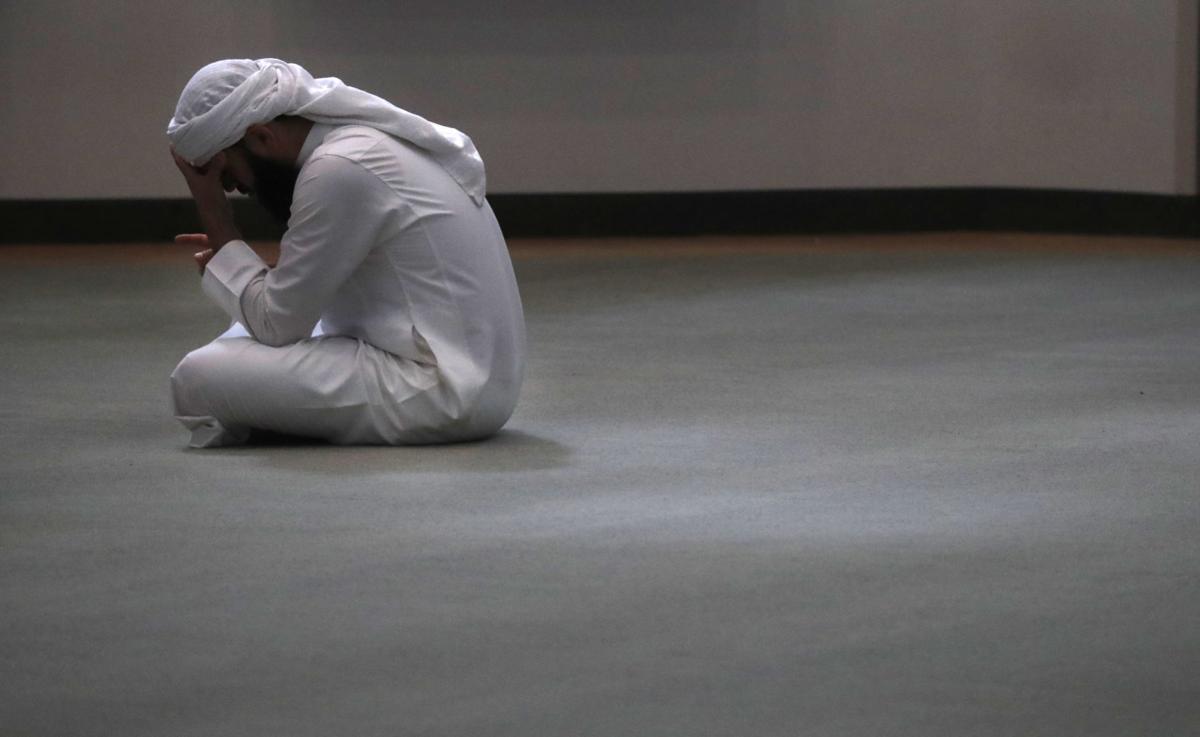 Sitting inside an empty mosque, Morad Awad bows his head during prayer before an Eid al-Fitr celebration in Plano, Texas, Sunday.