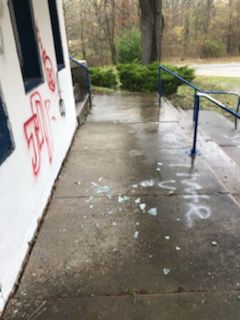 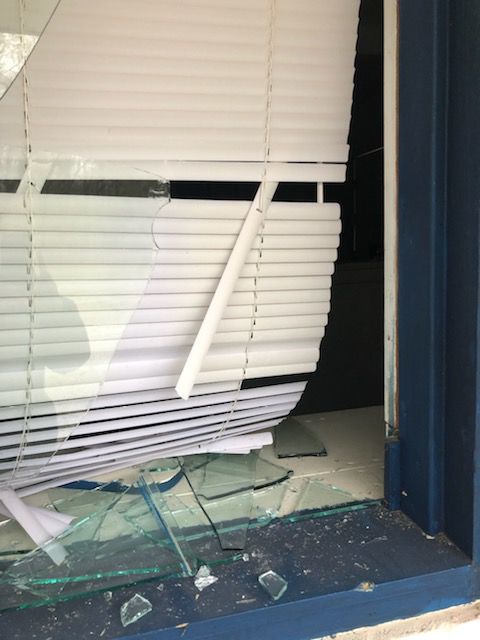 Dunes Arts Foundation President Amy Black says as many as five windows have been shattered in recent vandalism committed at the Dunes Summer Theatre in Michigan City.

MICHIGAN CITY — The president of the Dunes Summer Theatre is asking for help identifying vandals who broke into the theater and spray painted vulgar images in and outside of the Michigan City performing arts space.

Dunes Arts Foundation President Amy Black took to social media Sunday sharing photos of the vulgar images scrawled in black and red paint across all sides of the building.

Black said she first learned of the vandalism, believed to be committed overnight Saturday into Sunday, when the county sheriff knocked on her door.

A neighbor living close to the theater was on a walk, enjoying their morning coffee, when they passed by the theater and immediately called police, Black said she was told.

The Dunes Summer Theatre building, which typically reopens in April for the Dunes Arts Foundation's summer season, has remained closed the last several weeks due to statewide precautionary stay at home orders issued due to the global coronavirus pandemic.

If not for the spread of the novel coronavirus, Black said it's possible the theater could have been occupied when the vandals broke in.

"This would not have happened because we would've been there," Black said. "Come April, we're there morning and night."

With limited electricity turned on inside the building, Black said it's been difficult to assess the full extent of the damage or whether any items have been stolen.

Bricks were thrown through four to five windows, Black said. Spray-painted genitalia and a derogatory term used against LGBTQ individuals line the walls inside and out of the theater, leading Black to question if the vandalism could constitute as a hate crime.

Black said the theater does have insurance, but its deductible is high.

The affront couldn't have come at a worse time as the Dunes Arts Foundation considers canceling its summer season as social distancing continues. As a nonprofit, Black said the theater does not apply for many forms of coronavirus relief currently being offered to small businesses.

"Without summer sales, this is a double whammy for us," Black said. "This would've been our fourth summer. People were just learning about us and really rejoicing the place."

Black said she believes younger people, possibly teens in the neighborhood, may be to blame for the vandalism.

The theater has turned over its own security cameras and Black is asking for those in the neighborhood to consider doing the same with any Ring doorbell cameras or similar devices. She said she hopes a lesson can be learned from the experience.

"We're hoping these kids will be brought forward," Black said. "The parents know, so we're asking the parents to come on. Have a really hard conversation with your kids, and have them step up and do the right thing."

Black said she anticipates a volunteer clean-up effort will be organized in the near future. To learn more about the Dunes Arts Foundation and its programs, visit its website at dunesartsfoundation.org/support.

Michigan City's arts scene is dynamic: Andy Warhol, a 1927 building designed as a living and working space for artists and small business entr…

INDOT plans to close multiple lanes of an I-80/94 ramp at Grant Street as early as Monday. Here's your traffic workaround.

With COVID-19 limiting the number of people who can be in one place and direct contact, churches have had to get creative in reaching their flocks — especially the elderly and most vulnerable.

Gov. Pritzker is facing a salon owner's lawsuit, criticism from some Republicans who deem his plans an overreach and a Chicago Tribune editorial accusing him of being “cautious to the extreme.”

After closing amid the coronavirus pandemic, the National Park Service is testing public access at several parks across the nation.

Indianapolis International Airport’s top official says it could take up to three years for the airport's flights to bounce back to the levels it saw before the coronavirus pandemic.

Reported, confirmed COVID-19 cases rose by 86 across Lake, Porter and LaPorte counties, according to local and state health department figures.

Three Indiana women who moved to the U.S. as children have created a fund to help immigrant families who don't qualify for government aid and have lost their jobs during the coronavirus pandemic.

Gov. Pritzker and all senior administration officials will work from home for an undetermined period of time after an aide tested positive for COVID-19, according to a Monday statement.

A second correctional officer at Cook County Jail who tested positive for the coronavirus has died, the sheriff's department announced.

For working-class students who defied the odds to get a college education, it’s hard to be optimistic about the future.

With masks and testing, Notre Dame plans to reopen in August

Notre Dame officials announced the school’s campus will reopen to students on Aug. 10, with social distancing, a mask requirement, testing and contact tracing to prevent the spread of the coronavirus.

The Chicago Teachers Union is suing U.S. Department of Education Secretary Betsy DeVos and the city's public school district, saying its policies interfere with the education of students with special needs during the coronavirus pandemic.

Dunes Arts Foundation President Amy Black says as many as five windows have been shattered in recent vandalism committed at the Dunes Summer Theatre in Michigan City.