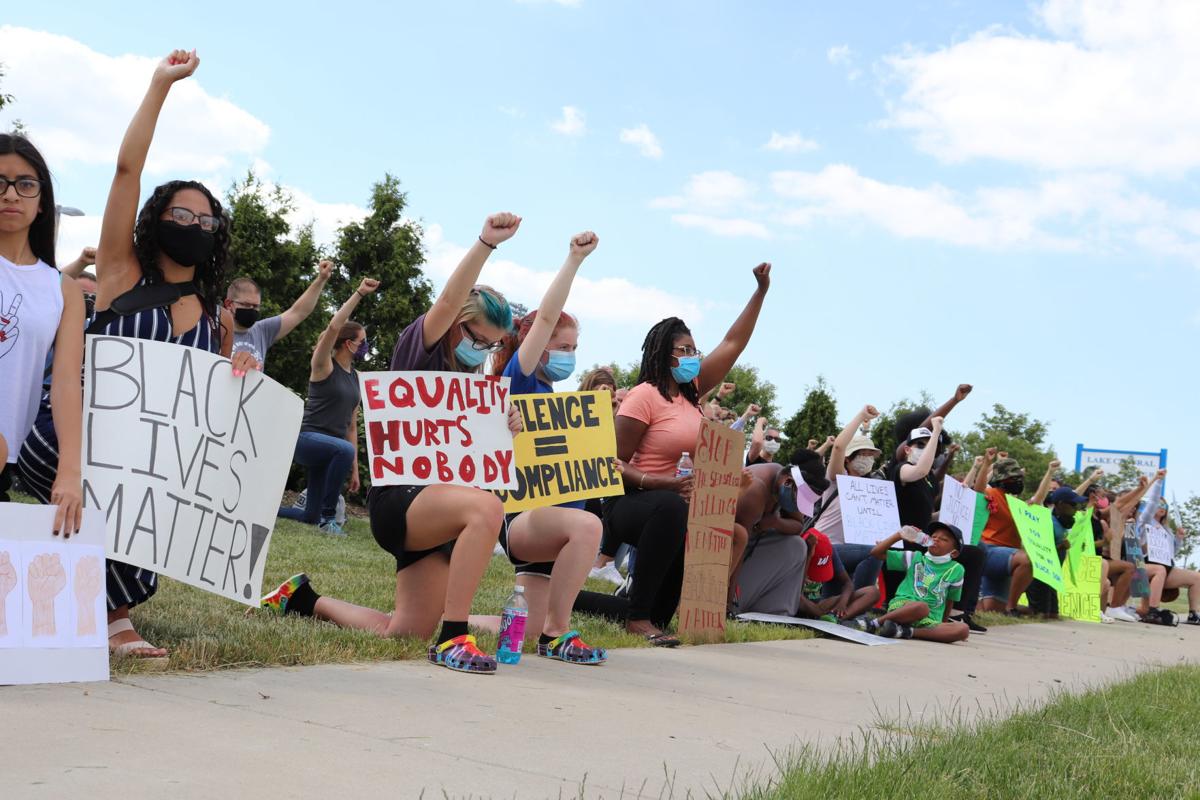 Students, educators and residents in the Lake Central School Corp. take a knee in honor of George Floyd in a peaceful protest Tuesday outside Lake Central High School. 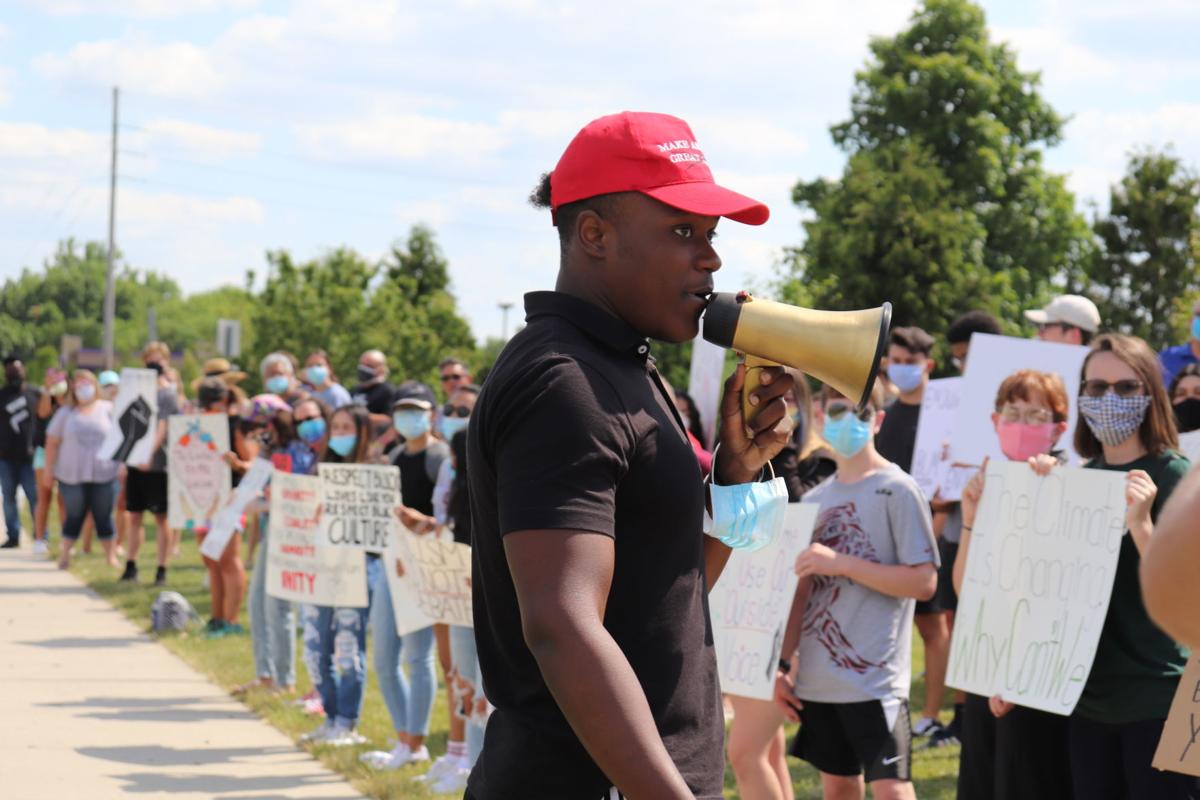 Marc-Henry Derogene, a graduating senior at Lake Central, leads peaceful protesters in a Tuesday student-organized rally outside Lake Central High School. Derogene crossed out the words "Great Again" on his red hat, replacing them with the word "Equal." 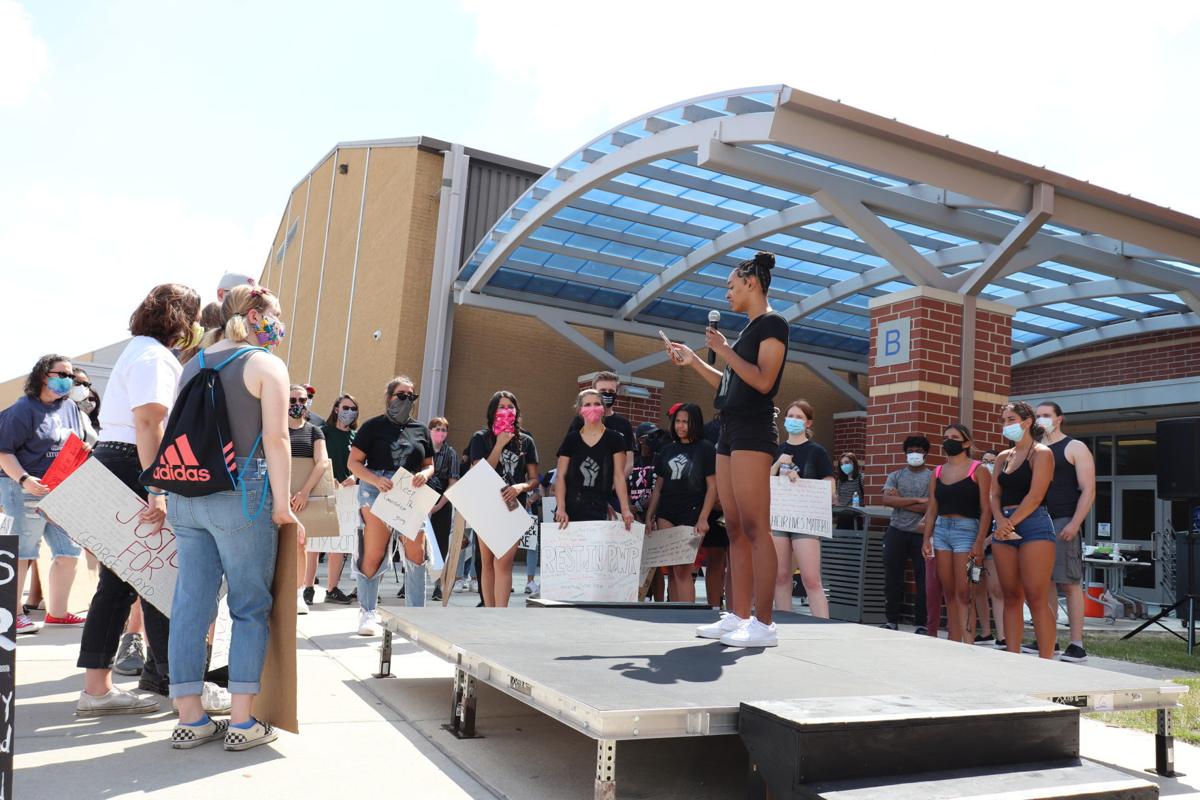 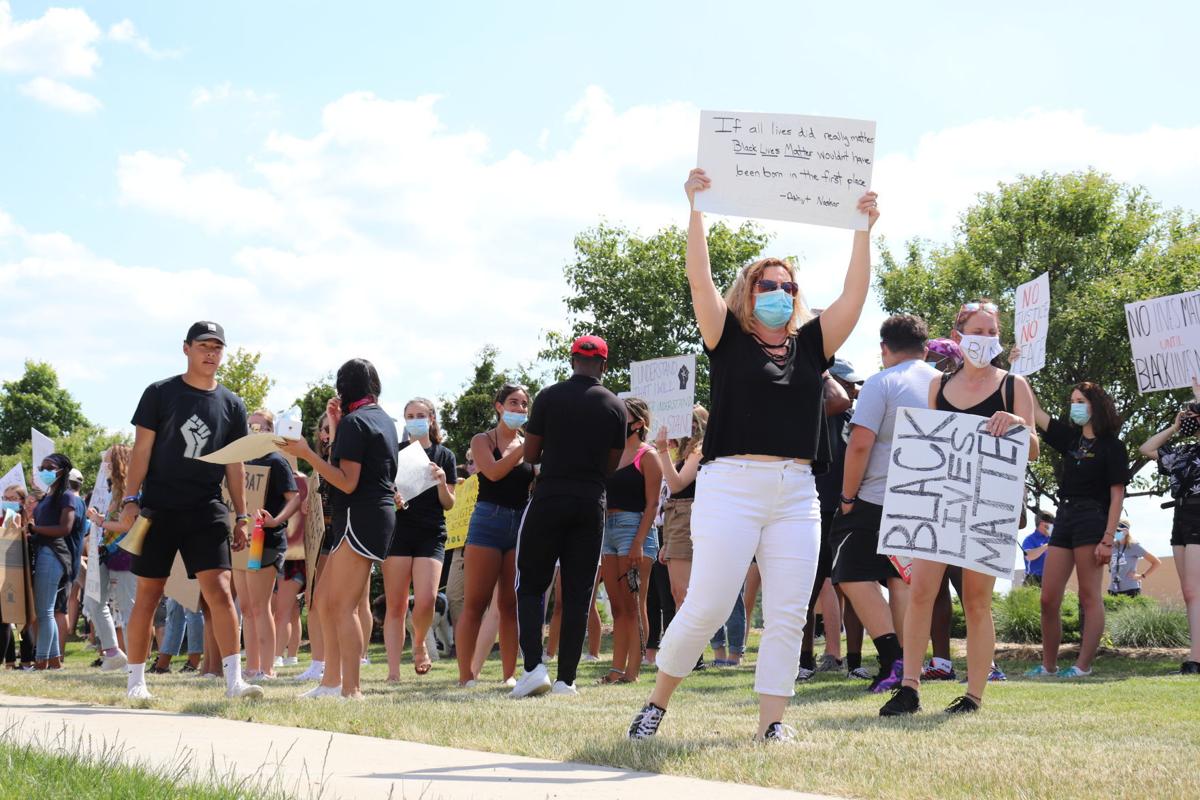 Supports of a student-organized peaceful protest outside of Lake Central High School hold up signs Tuesday afternoon on the school property along U.S. 41 in St. John. 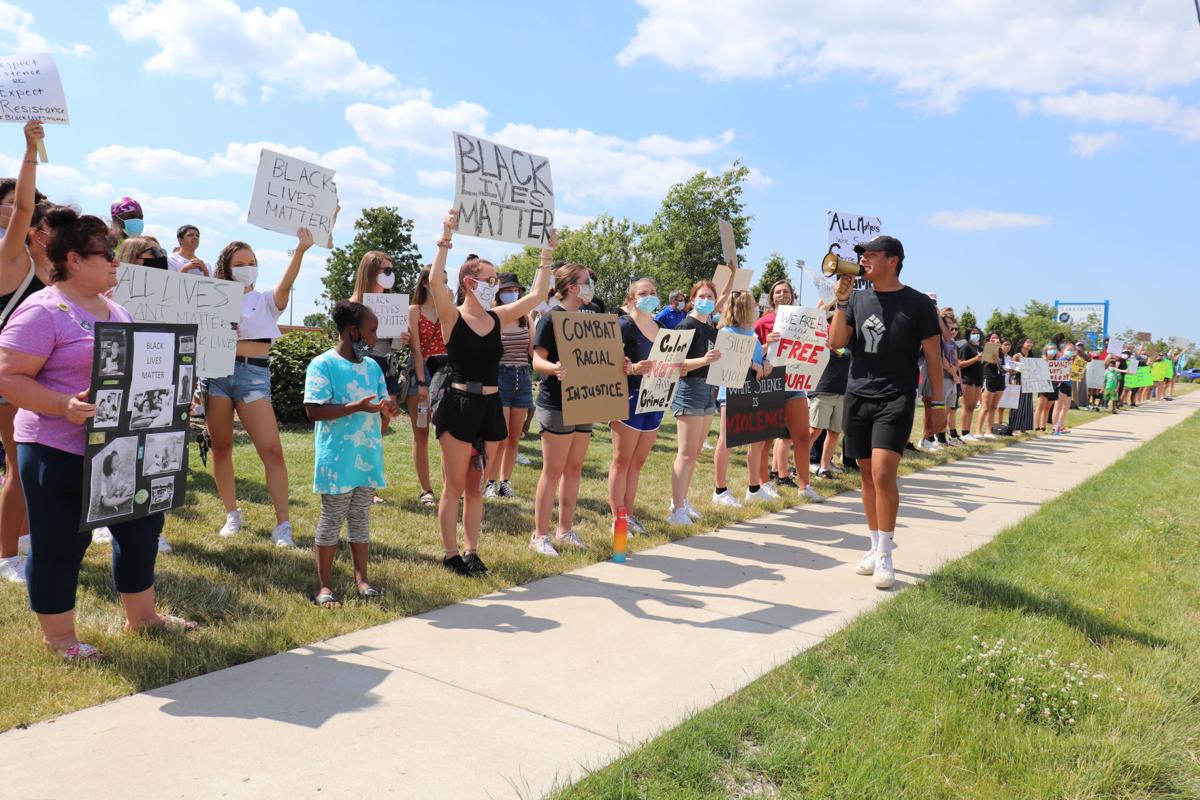 Mateo Cedano, a graduating senior at Lake Central High, encourage protesters Tuesday afternoon outside of the school in St. John.

Holding signs with messages like "Love Black people like you love our culture" and "If you think wearing a mask makes it hard to breathe, trying being Black in America!" as the crowd crossed the school's parking lot.

When they reached U.S. 41, the group of peaceful protesters, met by supportive honks of the busy thoroughfare's afternoon traffic, chanted "Say his name" and "No justice, no peace" before taking a knee.

A hush fell over the crowd — their silence broken only by the words of Mateo Cedano, who just completed his senior year at Lake Central.

"Only two minutes has passed," Cedano bellowed a megaphone. "Imagine not being able to breathe ... This is only a fraction of the suffering George Floyd went through."

The crowd held their position for about nine minutes — the same amount of time a Minneapolis police officer was captured on video kneeling on the neck of George Floyd, whose death has sparked national outrage over racial injustice and the use of police for force in America.

"As leaders of our generation, we want to fight for change," Cedano said.

Cedano was one of a group of Lake Central seniors who came together over the death of George Floyd. After seeing and attending similar peaceful rallies in St. John and Munster earlier this month, the students began sharing ideas to bring a similar movement to their high school.

Senior Michaela Spears brought the idea to school administration who helped coordinate a day and time with the support of local law enforcement.

Spears said the purpose of Tuesday's demonstration was to spread love and help empower fellow people of color.

Lake Central — the Region's largest high school by student population — recorded an enrollment with 16.3% of its students identifying as Hispanic and 7.5% as black, according to Indiana Department of Education statistics for the 2019-20 school year.

Lake Central Principal Sean Begley stood behind his students Tuesday, handing out water as the 3 p.m. protest drew into the early evening.

He said it's important to look at internal practices, including what the school is teaching students about race and equity, and in hiring teachers of diverse backgrounds who look like their students.

"When you see something like George Floyd's murder, you think, 'We've got to change. We're better than this,'" Begley said. "It's important for us to mentor these kids to become leaders. To be silent and not facilitate this would speak volumes."

As for the students who organized the protest, many of them are heading off to college in the fall — but they were encouraged by underclassmen friends in the crowd.

"We don't want it to stop after today," Cedano said. "We want it to be a priority to involve as many people as we can, to keep integrating everyone."

Students of this spring's Class of 2020 will graduate in circumstances like no others.

Some will celebrate virtually. Others may push back traditional ceremonies until later this summer. All will come at a distance.

This year, in light of the novel coronavirus pandemic, The Times is saluting these seniors.

We invited valedictorians, salutatorians and selected student speakers to share a few words with the Region; including speeches they had prepared for graduation day, their teachers' support and advice to students who will soon follow in their footsteps.

Students of this spring's Class of 2020 will graduate in circumstances like no others. Some will celebrate virtually. Others may push back tra…

View video of the peaceful protest on nwi.com.

City officials are standing by the fire chief in response to what the Gary mayor dubbed a "rash of ugly, negative postings and whispering in our firehouses" that have challenged the chief's character.

After the protesting, what's next for the Region?

Local official and community leaders weigh in on the next steps for Northwest Indiana as area protests quiet.

A businessman is facing federal fraud charges alleging he lied on an application for nearly half a million dollars in financial relief related to the COVID-19 crisis, documents show.

Voices of protest, crying for change, ring across US, beyond

Many say they march so that one day, when their children asked what they did at this historic moment, they will be able to say they stood up for justice despite all risks.

Illinois to reopen museums, gyms with restrictions this week

Illinois is poised to enter its next phase of reopening on Friday.

Illinois public schools and colleges will open this fall with help from the the state to provide 2.5 million face coverings to students, Gov. Pritzker said.

"I think we’re just starting. I don’t think anybody has a notion of how big a change this is going to introduce.”

Officials expressed outrage and disappointment after protesters in Madison tore down statues —including one commemorating a Union Civil War colonel who died fighting against slavery — assaulted two people — including a state senator — and set a small fire in a city building.

Chicago school board votes to keep police in schools

Chicago’s school board voted to keep police officers in public schools, rejecting the demands of activists and some politicians to cancel a contract with the police department.

The Excel Center in Hammond, Gary and South Bend is accepting applications for its next term which begins July 20.

'We are the hope': Lake Central celebrates Class of 2020 in summer commencement ceremony

Lake Central spread a message of hope as its Class of 2020 graduated in a sunset ceremony Thursday night.

"I'm nervous to send my kid back," one parent told the Lake Central school board. "I feel like this is a big gamble."

How the world reacted to Trump and Biden's debate

Over 40 million impacted by heat in the West

Over 40 million impacted by heat in the West

Students, educators and residents in the Lake Central School Corp. take a knee in honor of George Floyd in a peaceful protest Tuesday outside Lake Central High School.

Marc-Henry Derogene, a graduating senior at Lake Central, leads peaceful protesters in a Tuesday student-organized rally outside Lake Central High School. Derogene crossed out the words "Great Again" on his red hat, replacing them with the word "Equal."

Supports of a student-organized peaceful protest outside of Lake Central High School hold up signs Tuesday afternoon on the school property along U.S. 41 in St. John.

Mateo Cedano, a graduating senior at Lake Central High, encourage protesters Tuesday afternoon outside of the school in St. John.