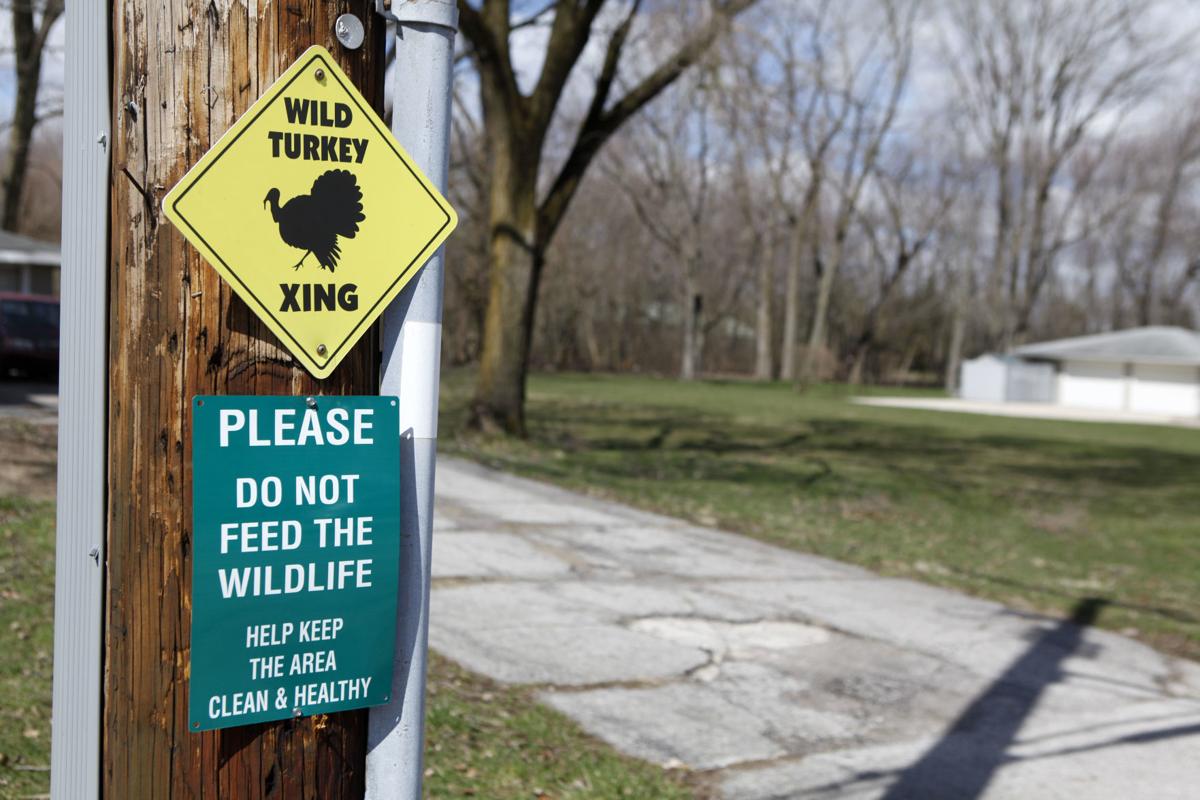 A pair of signs on a utility pole in the 1400 block of Austin Avenue in Schererville warn residents and pedestrians about wild turkeys. 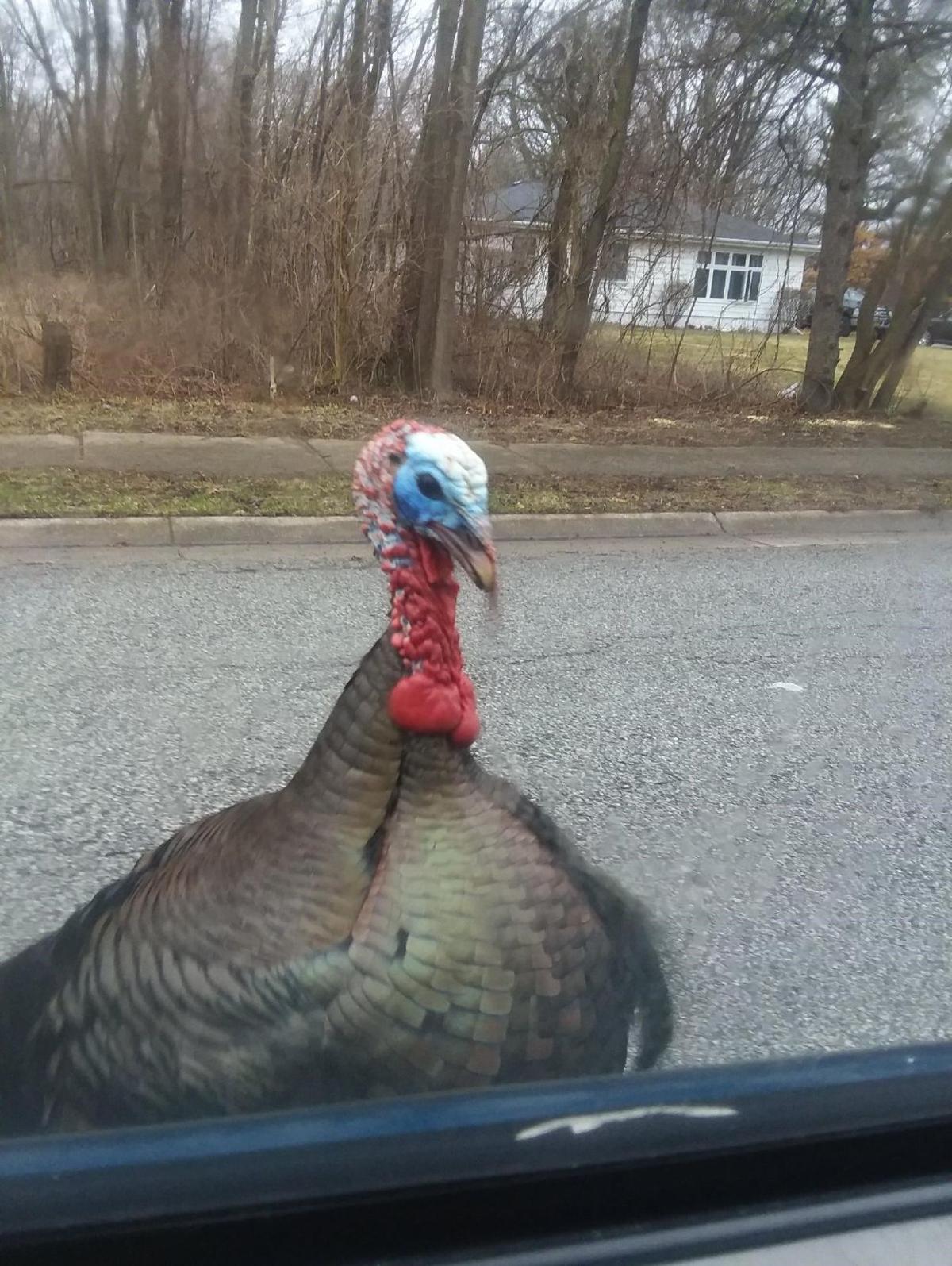 A turkey stands outside of Christine McCants' 2001 Chevrolet prizm on Thursday.

McCants said her friend lives on Golfview Drive near Austin Avenue, where a rafter of wild turkeys tends to hang out.

"We always see them roaming around," McCants said.

McCants spotted the turkeys on Thursday while driving and slowed down to take a look.

However, she wasn't expecting a "fowl" encounter with the birds: "It gets in the street, and I'm stopped and it fluffs up and it starts coming right at me," McCants said.

"He puffed up and he's walking right toward my car, it was like a bad Western. I'm like what the hell is going on here? ... Is this thing going to show me down?"

When she tried to leave, the turkeys began to lunge for the car tires — one even jumping in front of her car, McCants said.

"I'm laughing, but at the same time I'm like, 'Oh, my God, if I was not in my car, I would be terrified right now,'" McCants said.

After a few minutes, she honked her horn, hoping the turkeys would let her drive away. But they persisted, moving back to the driver's side window.

McCants joked she was "safely able to escape" after distracting the pair with her hand and the car window.

However, McCants doesn't want to see the rafter removed from the area. Rather, she wanted to share the story because it's light and funny.

"I just thought with everything so serious now, I thought it was something I kind of had to share because people just, they need just a little pick-me-up, a little distraction," she said.

The unincorporated Crown Point resident said she drives through the area on her way to work and sees the turkeys, which often make their way into every-day conversation.

This was her first up-close encounter with the turkeys. Usually, she sees them crossing the street or hanging out on the side of the road.

The turkeys often congregate in the area — a wild turkey crossing sign hangs on a utility pole in the 1400 block of Austin Avenue. One right below it asks residents to not feed the wildlife.

However, about 75 years ago McCants might not have had such a close encounter with the birds.

In 1945, wild turkeys were considered a vanishing species in the United States, according to the Indiana Department of Natural Resources (DNR).

'Aggressive' turkeys corner man in his garage for more than 30 minutes, police say

SCHERERVILLE — A man called police for help after three turkeys cornered him in his garage for more than 30 minutes Sunday morning.

Chicago Public Schools will distribute 100,000 electronic devices for students to use at home as the district implements a remote learning plan, officials announced.

Gov. Holcomb said the behavior of patrons at a Northwest Indiana restaurant, whose over-the-top tipping was reported in the The Times, is an example for all Hoosiers to follow.

Darlene Spencer was among the first patients in Lake County to be diagnosed with the novel coronavirus.

Three local ambulance crews with inHealth Integrated Care are heading out to help with the relief effort in hard-hit New York City.

Caleb Johnson, a Republican who represents Ward 5, opened a new location for his law office along Joliet Street in Schererville at the end of October, he told The Times on Thursday.

Burr Street in Schererville to close for 2 days

Burr Street will be closed to all through traffic from U.S. 30 to 75th Avenue for continued work on the town's ongoing Burr Street improvement project.

Could this be T-Rex's relative?

A pair of signs on a utility pole in the 1400 block of Austin Avenue in Schererville warn residents and pedestrians about wild turkeys.

A turkey stands outside of Christine McCants' 2001 Chevrolet prizm on Thursday.