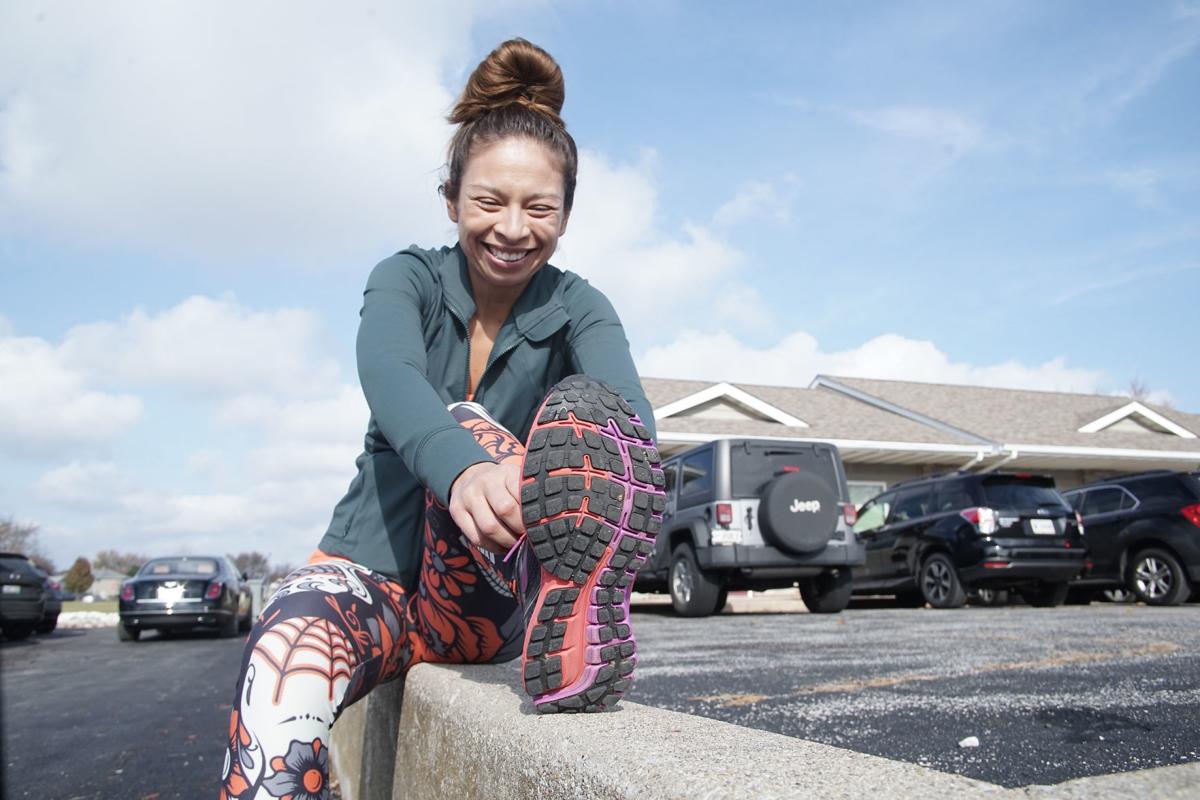 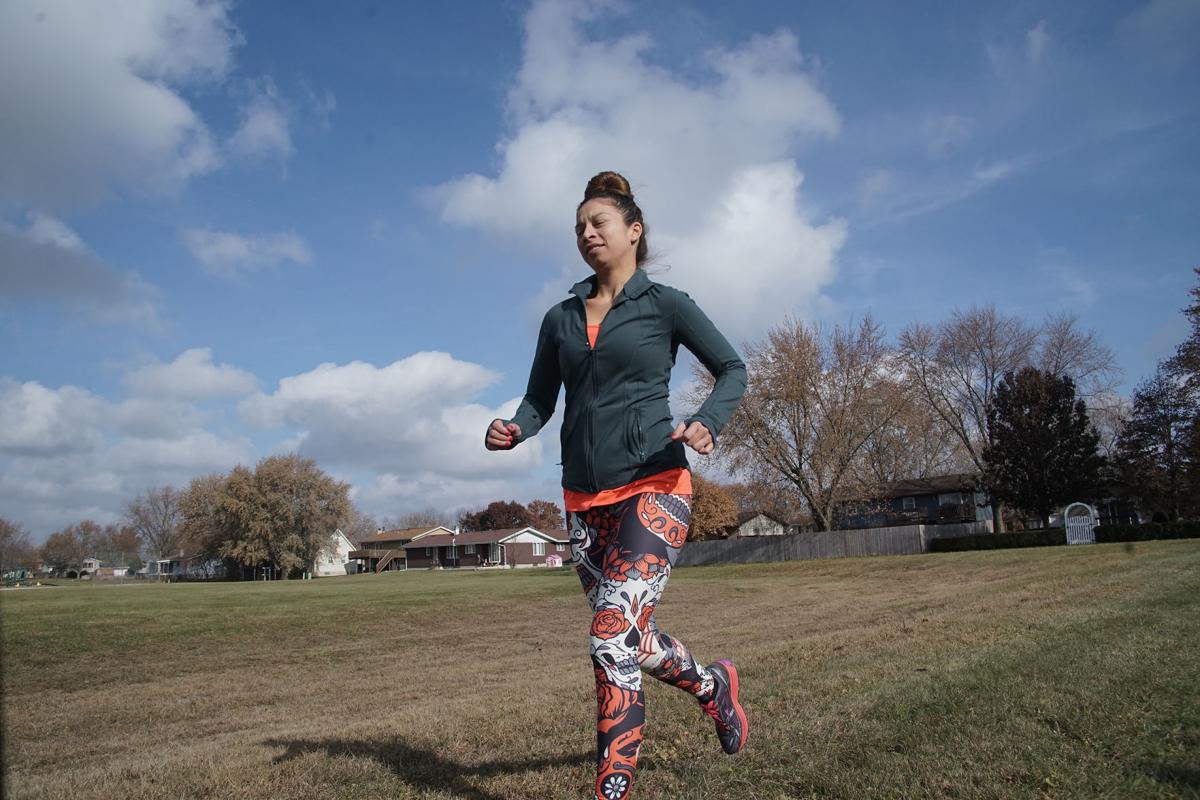 Marialena Nagel a governing member of the 40-year-strong running club, the Calumet Region Striders, says proper clothing in layers are a must for winter workouts. 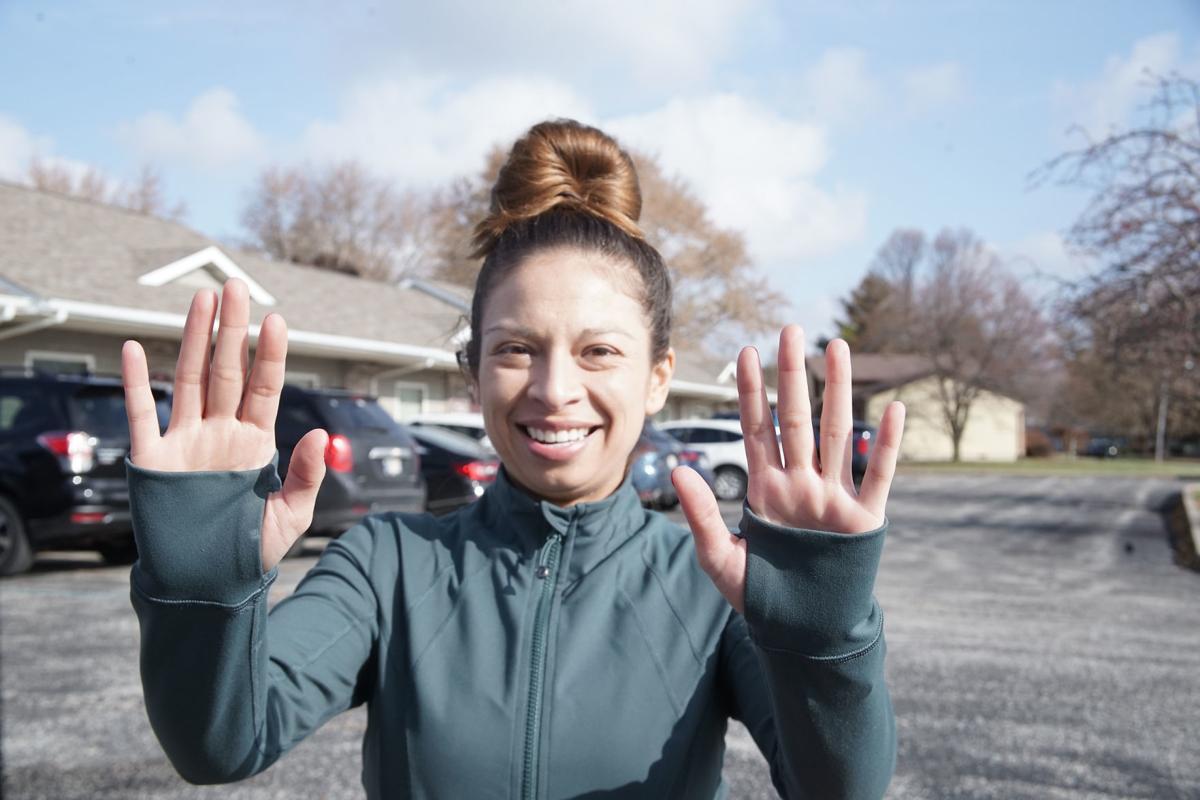 Marialena Nagel opts for a top with "monkey glove" sleeves to keep her hands warmer.

Whether  on a crisp, cold forest trail or in a warm gym, winter activities can keep Region residents fit and healthy.

"I run outside. I run outside regardless if it's cold or not,” Lena Nagel, of Hobart said.

The 36-year-old is a governing member of the Calumet Region Striders, which has been building camaraderie and promoting running across Northwest Indiana since 1978.

For Nagel and her Striders running team, The Sole Crushers, lacing up even in winter's chill is the only way to reach 2,019 miles, the Striders’ annual Run the Year challenge.

Nagel’s team total is just one of her running goals, some of which require winter training to lead to the starting line of spring races. "You're more motivated to get out there because it's like, ‘Race day is coming,’” Nagel said.

Last January, Nagel ran the Houston Marathon. Before this, she broke her mileage record for a single month, running 180 miles in December 2018.

To run through the winter, Nagel recommends proper clothing, such as non-cotton materials, layering up, the right shoes and finding the best spot for you.

Her favorite local running locale? The Coffee Creek Watershed Preserve, a 157-acre landscape near Chesterton. A close-second would be Sunset Hill County Farm, near Valparaiso.

She began running at both during her four-years on the cross country team at River Forest High School in Hobart, and she has returned ever since.

Bruce Rowe, the public information officer for Indiana Dunes National Park, shared some hiking trails well-suited for other winter activities, such as snowshoeing and cross-country skiing.

“Miller Woods Trail (recently renamed the Paul H. Douglas Trail) provides a one-mile easy loop with a small hill to navigate. Skiers can then take the trail to the beach and the gently rolling oak savanna makes for a fun skiing adventure for more experienced skiers,” Rowe said. “In addition, the (Indiana) Harbor Belt is a former train track, and can be accessed for a longer, very flat east-west trail.”

He recommends at least four inches of snow for snowshoeing and cross-country skiing.

“Remember a few rules of the trail when skiing: hikers using snowshoes are asked to walk to the right of the cross-country ski tracks whenever possible to maintain the trail for skiers."

And beware of shelf ice that forms along the edge of Lake Michigan.

“Don't be fooled. Despite its appearance, the shelf ice is not solid,” Rowe said. “In fact, due to the way it is formed, the shelf ice has numerous air pockets. It can be difficult to tell where the ice ends and the beach begins.”

Lake Michigan hikers must not walk on the ice, for a fall through into the water could quickly turn fatal, Rowe said.

For Nagel, encountering ice on her paths is her least favorite part of winter running, but she does not let it stop her.

“My philosophy is, ‘If you haven’t fallen as a runner, then you haven’t run long enough,” she said.

Keeping fit for the season

John Bobalik, a personal trainer at Purdue University Northwest Fitness Center in Hammond, has worked to keep people in shape in spite of harsh Region winters for more than 30 years.

Formerly a retired facility director, he returned after his 2016 retirement to continue training and to host group fitness classes.

Bobalik said that when winter hits, cardio and strength regimens should be maintained with short, attainable goals that build to long-term goals.

"Another thing you could do, too, is you could develop different perks for yourself, you could get into a buddy system," Bobalik said.

Perks could include a new pair of shoes or new workout gear once goals are hit, Bobalik said.

To prep for skiing, he recommends cardiovascular endurance supported by running or bicycling, as well as a strength training program.

For more information on winter activities at Indiana Dunes National Park, call the Paul H. Douglas Center at 219-395-1824. Cross-country skis and snowshoes are available for free to use on the neighboring Miller Woods Trails.

To learn about fitness classes and programs available at the Purdue Northwest University Fitness Center in Hammond, call 219-989-2400.

Staying fit for winter has visible benefits in the driveway too, allowing individuals to more easily shovel snow.

Sedentary, deconditioned and older individuals are particularly at risk when shoveling. Arteries constrict in the cold and blood can pool in the legs during outdoor work, raising heart rate and blood pressure.

The most common injuries from snow shoveling include heart attack and lower back and shoulder problems, including dislocation, said John Bobalik, a personal trainer at Purdue University Northwest Fitness Center in Hammond.

"There's a whole litany of problems you can run into if you're older and you're deconditioned and you don't warm-up and you're not in shape to shovel snow, so you really have to be careful," Bobalik said.

To prevent these issues, he suggests a warm-up that mimics the motion of shovelig side-to-side. Shoulder-rolls and a lower back stretch via a yoga pose are also helpful additions to a shoveling warmup.

Bundle up, breathe deep and enjoy the fitness, emotional benefits of winter activities

Physical fitness provides countless health benefits. Step outside for fresh air and breathe in the sense of well being becomes apparent. Merge the two, and health experts say you have a powerful combination that offers long-lasting benefits.

Marialena Nagel a governing member of the 40-year-strong running club, the Calumet Region Striders, says proper clothing in layers are a must for winter workouts.

Marialena Nagel opts for a top with "monkey glove" sleeves to keep her hands warmer.