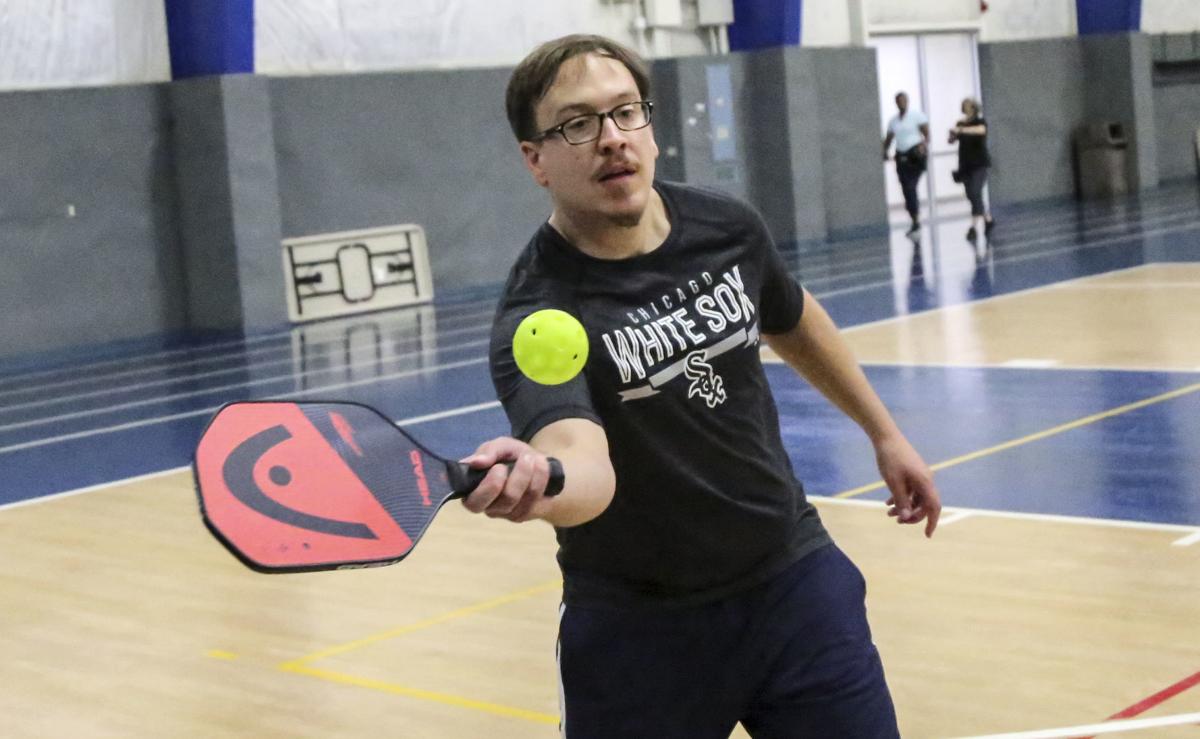 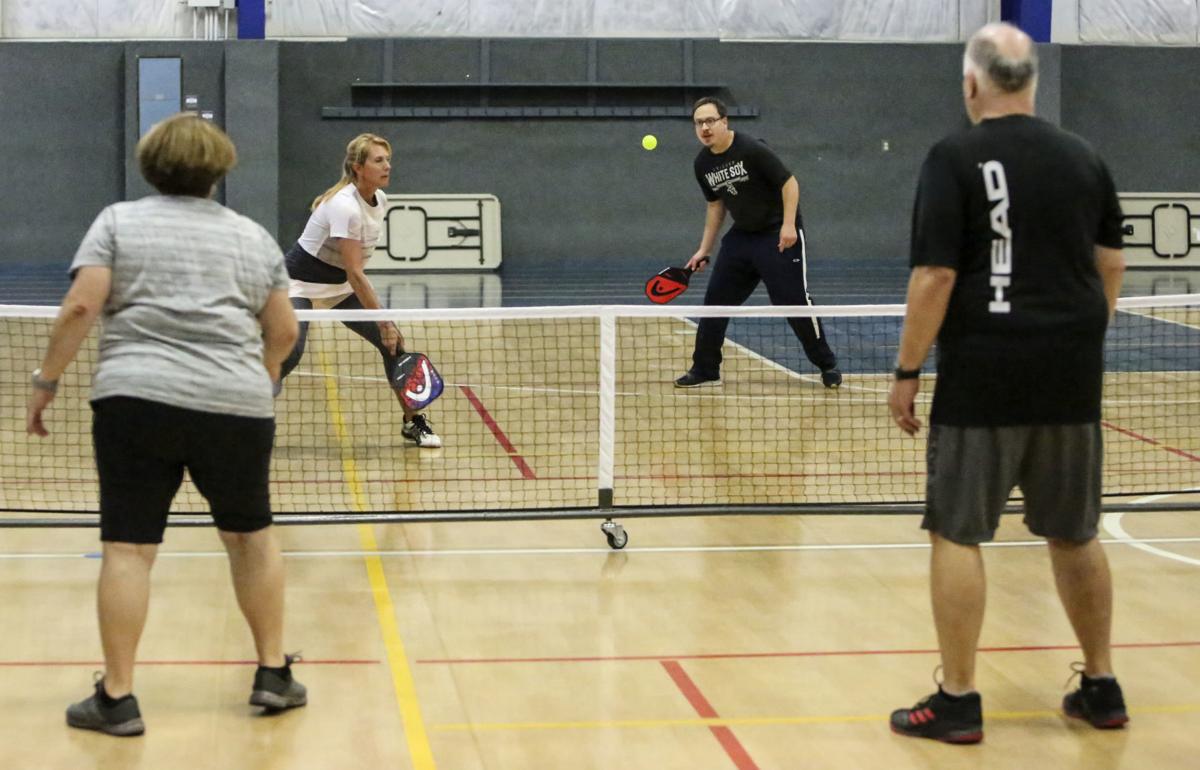 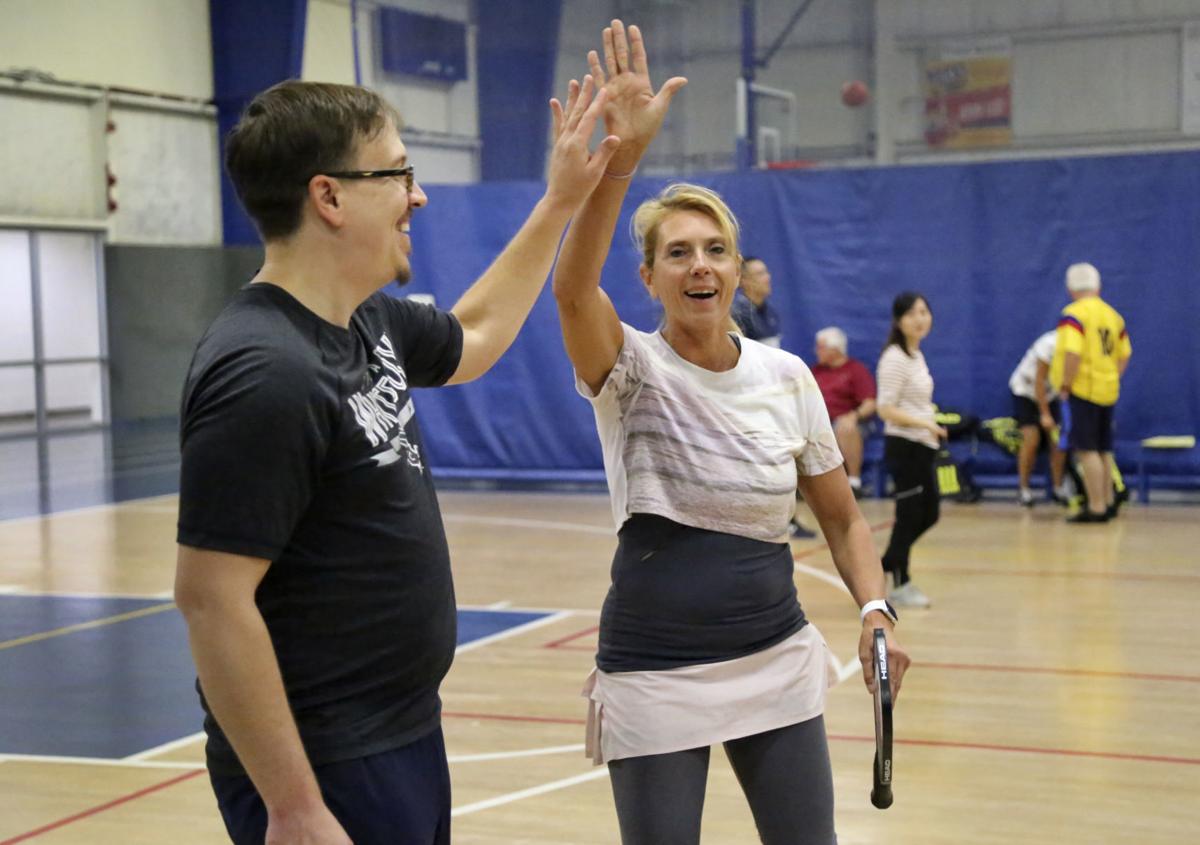 Giles Bruce and Shannon Krzeminski celebrate a point while playing pickleball at the Lincoln Community Center in Highland. 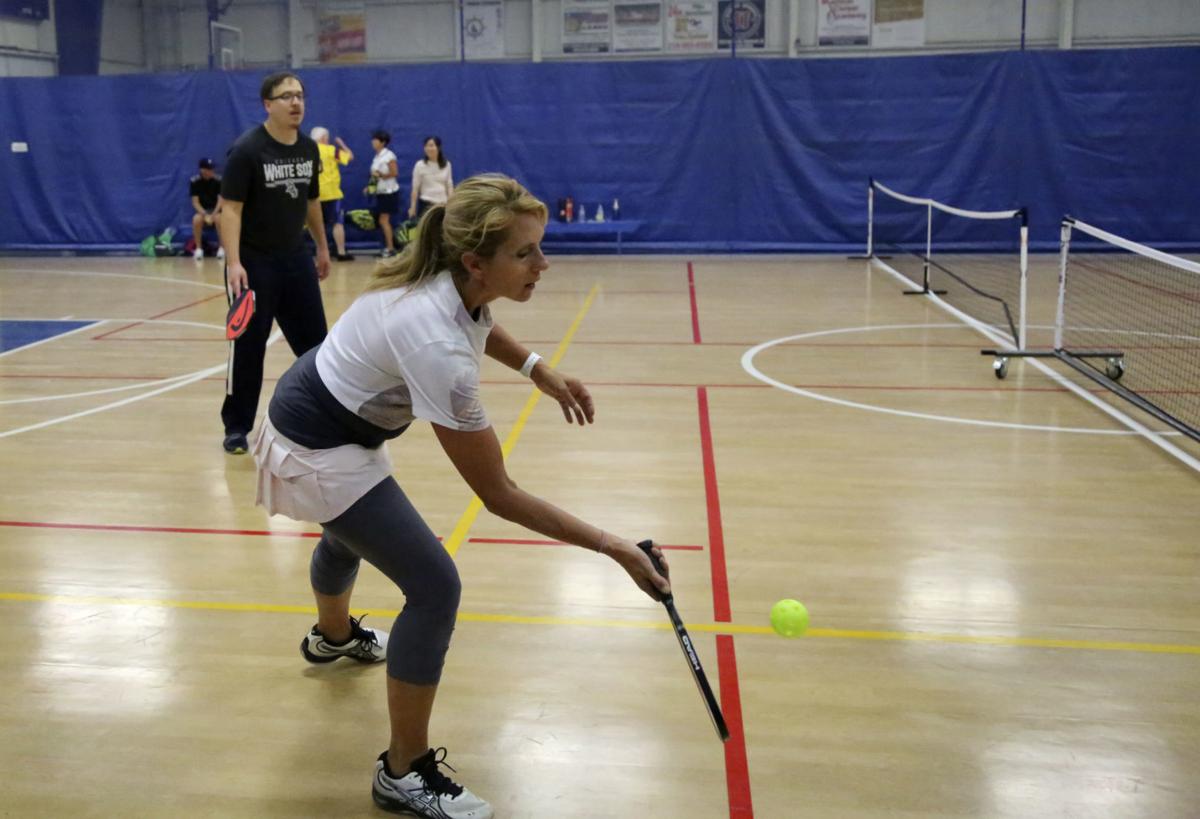 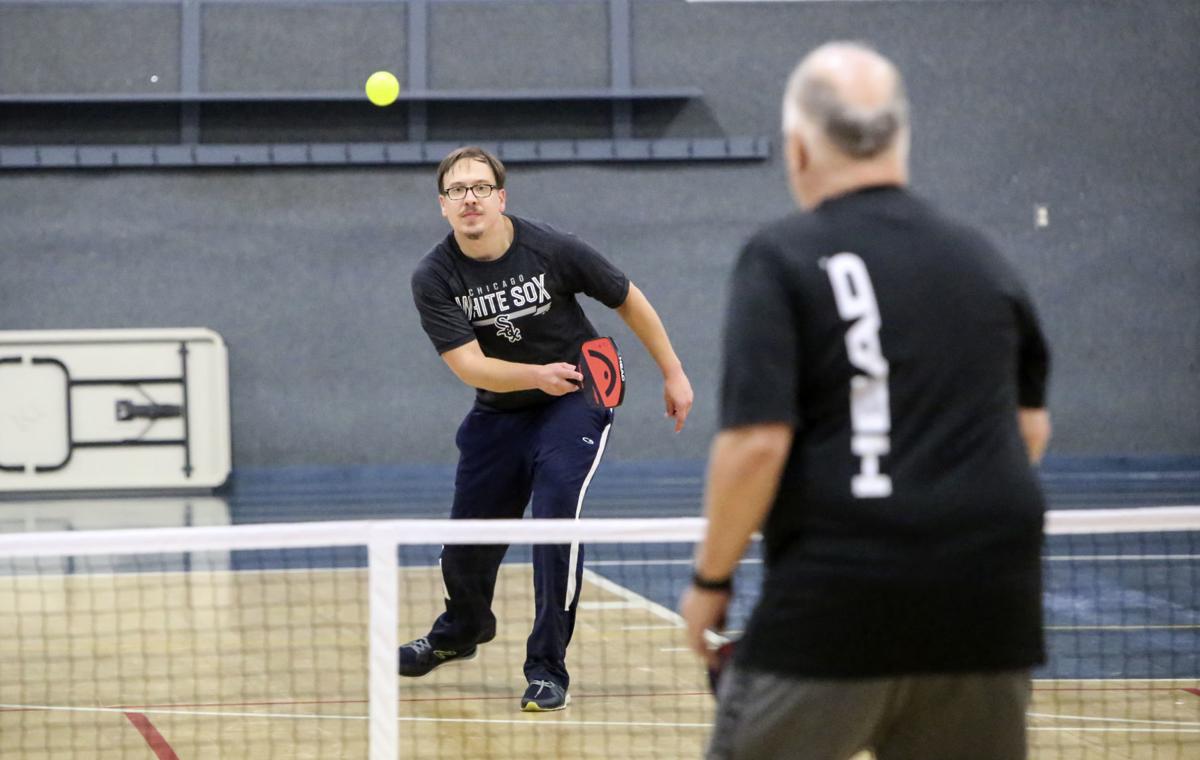 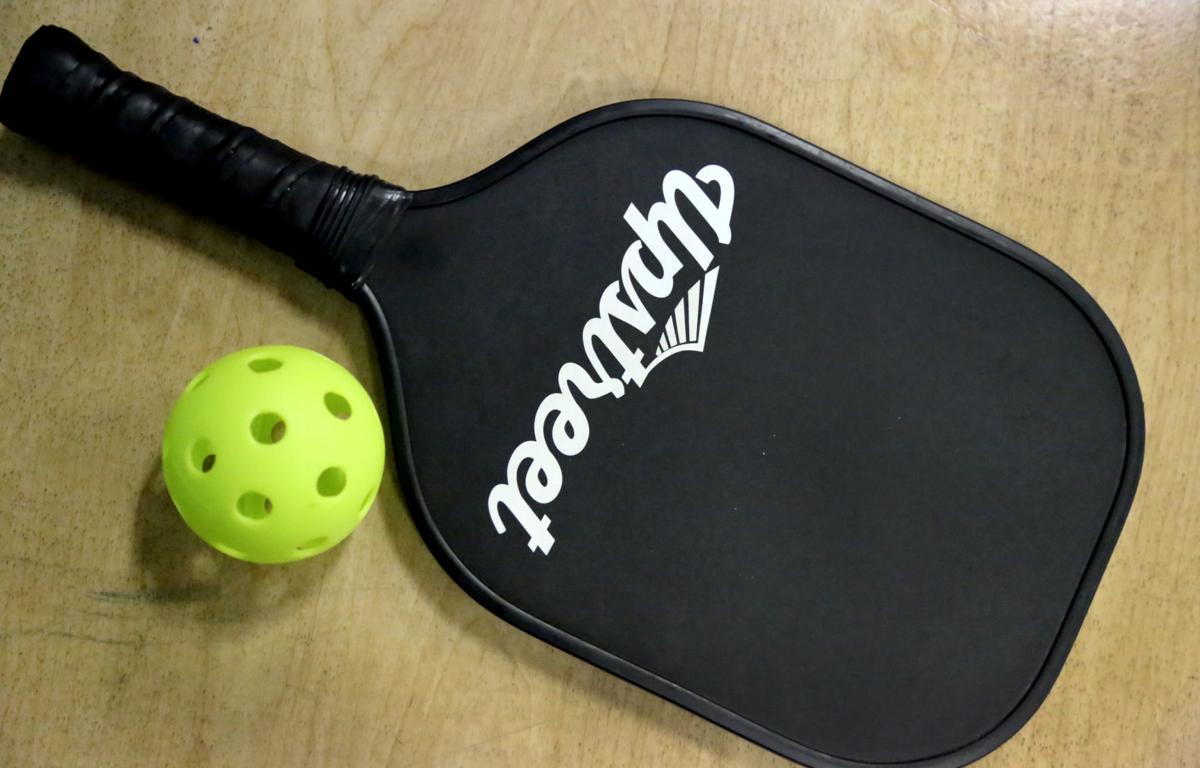 Pickleball equipment is shown at Lincoln Community Center in Highland. 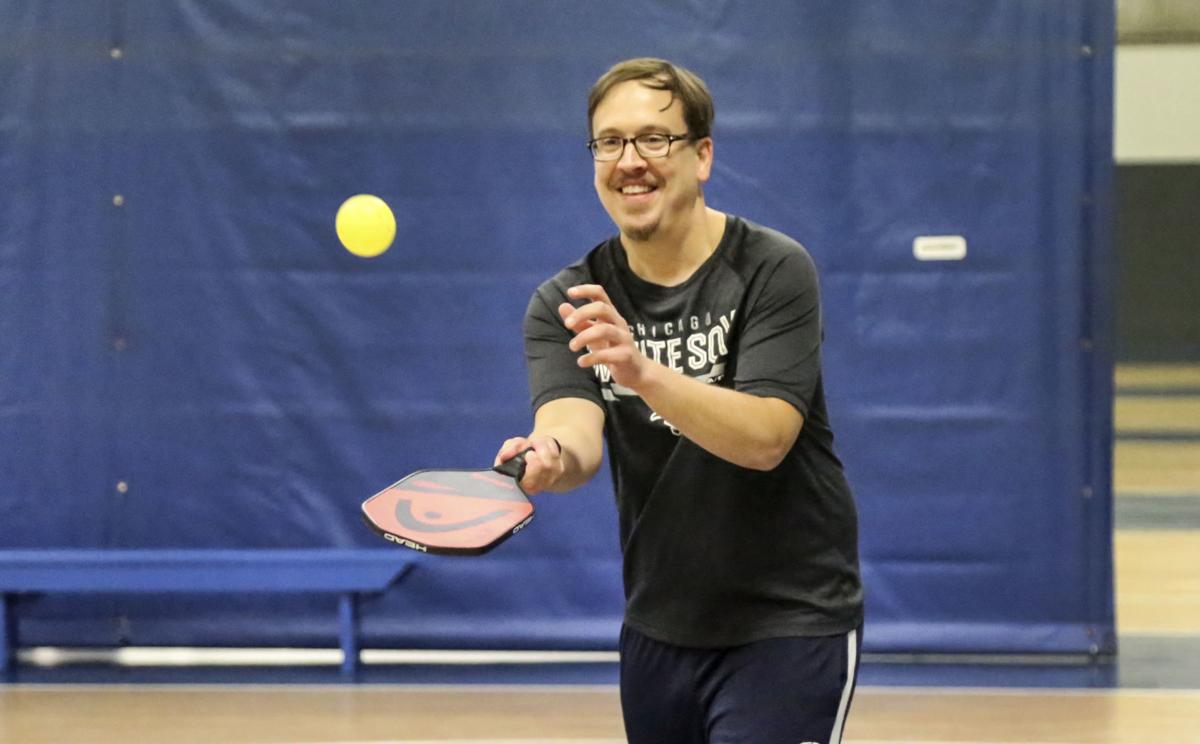 HIGHLAND — Pickleball is, apparently, expanding quicker than my waist line after a steak dinner.

The game — a cross between tennis, racquetball and ping-pong — has been one of the fastest-growing sports in the country the past few years, especially among older Americans, who often appreciate its abbreviated court size.

But, even though I'm The Times' fitness experimenter-in-chief, I had never tried it.

Len Sporman, a Dyer retiree who has been trying to grow the sport locally, has been asking me to give the game a shot for a few months now. I finally succumbed to his charm, and on Monday joined him and about a dozen other folks on the pickleball courts at Highland's Lincoln Community Center.

I'm glad I did, because now I can see what the fuss is about. And I found a fitness activity I could envision myself getting into.

In pickleball, players — matches can be singles or doubles — stand on either side of a roughly 3-foot net on a smaller version of a tennis court. From there, they hit a Wiffle ball back and forth with specialized paddles that look like miniature griddles.

The rules are similar to tennis, with some small differences. And don't ask me to tell you how it's scored.

But it's a game that anyone who has played racket sports — whether that's badminton, squash, racquetball — would probably enjoy. "We call it life-sized ping-pong," said Sporman's wife, Sharon.

Former tennis players entering old age like the sport because it doesn't require as much running around.

"It's just exploded with the senior population more than anything," said Alex Brown, superintendent for Highland Parks and Recreation.

I'm not a senior — though I've been known to play one in the newspaper — but I am a little out of shape, so I dug the fact that I didn't have to sprint super far to keep a volley alive.

But make no mistake: Pickleball will make you sweat. I was dripping with it Monday after my one game, about all this first-timer could handle.

Marianna Runkle, a 61-year-old court reporter from Schererville, never played sports. But, last year, when she and her husband, Bruce, were looking for a physical activity to do together, they stumbled upon pickleball.

They've been playing twice a week ever since.

"She went from not being an athlete to 'you don't way to play her,'" said Bruce Runkle, a 66-year-old retiree.

He was right. In my match against her, I made the mistake — more than once — of lofting the ball too high on a volley, allowing her to spike it back at me, volleyball-style, for a point.

Shannon Krzeminski, of Lansing, was my partner for the doubles match, against Runkle and Rich Bowman, who has competed in pickleball championships.

"All ability levels of people can play," said Krzeminski, who has taught the game as a physical education instructor at Thornton Fractional North High School

She also plays competitive tennis, and said pickleball improves her skills for that sport.

"I like the game because it helps with my reaction time," she said. "When I'm in the kitchen" — the area right in front of the net — "it feels like a boxing match."

Krzeminski took turns encouraging me and telling me what I could do better — you know, like a teacher. One thing I learned was that I could improve my footwork.

And not to play Marianna Runkle.

Where to play pickleball in Northwest Indiana

If you know of other indoor facilities or outdoor courts, call Len Sporman at 219-308-4502. You can find pickleball courts anywhere in the country at places2play.org.

GRIFFITH — Len Sporman used to be an avid racquetball player, taught it for many years. But later in life, after his joints started breaking d…

ST. JOHN — As I walked into the yoga studio, I saw a handful of people laying on padded yoga mats, under blankets, little pillows over their e…

Pickleball a mashup of tennis, racquetball and ping pong: A growing sport for all ages in the Region

Mixing elements of tennis, racquetball and ping pong, pickleball is a sport that has been gaining popularity in our area in recent years.

Strongman competition in Hammond pushes participants to the limits

HAMMOND — I walked up to an obstacle course here the other day and quickly realized the error of my ways.

Giles Bruce and Shannon Krzeminski celebrate a point while playing pickleball at the Lincoln Community Center in Highland.

Pickleball equipment is shown at Lincoln Community Center in Highland.